Very dynamic despite its 109 years (yes, yes, since 1903 …), Husqvarna offers this year two new models built around the same single cylinder and also sharing most of their elements. These two models, like the Nuda 900 and 900 R, were developed in collaboration with BMW, owners of the brand now based in Varese, Italy..

The TR 650 Strada and Terra, Road and Land therefore, come in the very buoyant segment of single-cylinder machines. No less than 30,000 motorized units were sold worldwide in 2011. This gives the now Italo-Germanic manufacturer high hopes, particularly in the Brazilian, South African, Australian and North American markets, adepts of this type of production.. 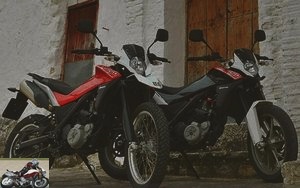 The two novelties share the strong aesthetic heritage of the brand, with taut and elegant lines, a signature of the Italian style. One glance is enough, however, both to be convinced of the genetic identity of the two sisters and of their different destinies. While one is aimed at road bikers, the other unambiguously cultivates an all-terrain vocation. 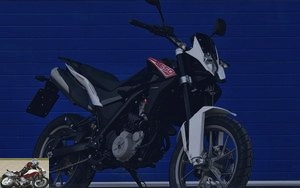 The Strada, for example, adopts a classic front wheel hugger, while the Terra has a raised mudguard. The latter, skimming the frontal optics, seems to spring from its taut lines. Cast aluminum rims, fitted with Metzeler Tourance road casings, for one and spoked Metzeler Sahara for the more adventurous, are the second and last obvious differences. More "subtle", we will finally note the 17 "and 19" (front) wheels fitted to the asphalt paver and an 18 "and 21" (front) mount for her sister. 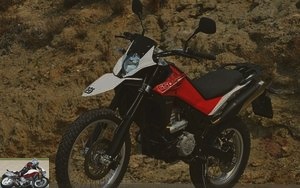 Excluding these few points, both are adorned with the same look. Their long saddles, housing a can of 14 liters, cover the tank, with the stopper without hinge, resting on a slender loop. Two large passenger grab handles frame the seat, forming a luggage rack, and dominate the exhausts in the high position. 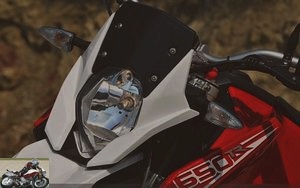 The assembly rests on a tubular steel beam, the rear loop of which is bolted to the frame and a support rod connected to the engine at the front. For this one, Husky was once again drawn from the German organ bank. We thus find the proven single cylinder of the BMW G 650 GS, but modified with the transalpine sauce … rigor AND fun. Thus, the liquid-cooled block, with new cylinder heads with scarlet coating, receives a double camshaft, two spark plugs and adopts modified valve lift curves. We especially note the installation of a forged piston and its lightened crankshaft, with a balance shaft in order to effectively limit vibrations. Thus reworked, the uni-cylinder delivers 43 kW (58 hp) at 7,250 rpm and develops a maximum torque of 6 da.Nm at 5,750 rpm. For young people under 25 years old, a flanged version is available, according to the European regulations in force with 35 kW (48 hp) at 7250 rpm and 5.4 da.Nm of torque at 5750 rpm. 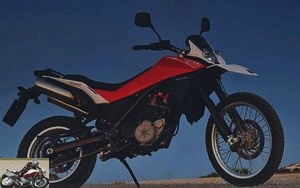 To guide these trails, the same Sachs inverted fork, non-adjustable, 46 mm equips the machines. The combined spring-shock absorber, adjustable in preload and rebound, is based on a classic steel swing arm mounted on rods. Front and rear offer 190mm of travel for both road and adventure, but different damping laws. Small specificity, the caster angle is also variable depending on the model. 64 ° for the Strada (standard ABS), it is 63.5 ° for the Terra without ABS or 63 ° with assisted braking, optional on the all-road model. Braking is based on a 300 m single-disc Brembo double piston caliper, combined, at the rear, with a 240 mm disc pinched by a single-piston element. 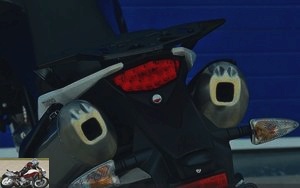 Well made and in contrast, mixing gray sandblasted elements, black casing and red cylinder head, the mechanical presentation is still undergoing the horrors of a perfectible finish. Lugs and other electrical wires could be made more discreet. Likewise, we regret the passenger footpegs welded to the frame.. 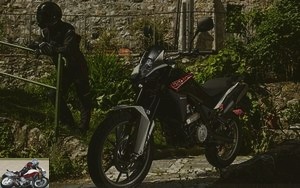 On either side, it is appropriate to throw the leg high enough. The TR 650 Terra (with ABS) has a seat height of 865 mm, that of the TR 650 Strada only 5 mm less. Note that the path version, if without ABS, adds 10 mm to this value. Narrow near the false tank, the saddle still allows good downforce on the ground for riders over 1.75 m. The larger front wheel raises the handlebars, making the overall position more pleasant on the Terra. Vertical bust position, reduced leg flexion and sheathed footrests make the frame welcoming. Likewise, the brake levers and clutch lever are adjustable in spacing. Unsurprisingly, the hands find a wide, almost flat handlebars, supporting the stems already in place on other models in the range.. 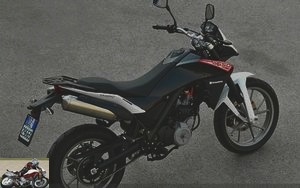 Another similarity, the instrument panel will not surprise owners of Nuda 900. This revolves around a central tachometer easily readable, but without the gear indicator engaged. On the left, the usual warning lights are placed (gasoline, engine, indicators, neutral, etc.). On the other hand, a digital window contains tachometer, engine temperature gauge. Various information (outside temperature, ice warning, odometer and partial) scroll successively by pressing, not very easy, a small button on the meter unit. Rather spartan, the entire cockpit is hardly bothered with frills. Upper triple tree and saddles are of good quality. Nothing more. Finally, ABS can be disconnected and the contactor is coded. 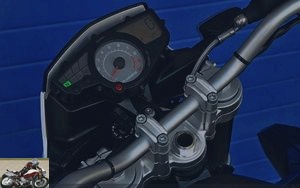 Complainant, the moan of the starter is quickly covered by the dry clicks of the 652 cm3 carton. This quickly takes off the 186 kg of the Strada (183 Terra without ABS). Cheers, the geometry of the two machines is a treat in the congestion of urban centers. Despite a fork devoid of adjustment, mass transfers seem well contained, avoiding the rocking horse effect.

The low inertia of the single cylinder and its remarkable availability, supported by a precise 5-speed gearbox, boosts the playful character of the two sisters. If he does not accept manages to drop below 2,500 rpm, the German-born boiler finds enough grace to take the crew to the intermediates at low speed. Rising speed without dragging, it already reveals a lot of ease in urban areas. Manoeuvrable, balanced, little vibrating, the TR 650 slips into the dawn of the Spanish suburbs, showing their desire for less confined spaces. 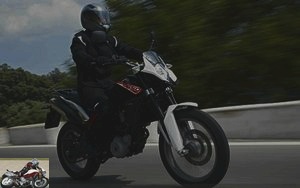 Waiting for your call, both trails respond effectively to the slightest twist of the throttle. Stalled at 5,000 rpm on the legal motorway, Strada and Terra keep a good part of their team in reserve, ready to spring from their “starting boxes”. Husqvarna certainly knows how to design punchy single-cylinder.

For comfort, it is already less obvious. Long journeys will remind your foundation that its base has a little hard edges and a little thin foam. Also, on the road model, we would have liked better airflow protection without resorting to the optional high bubble. The cycle part also testifies to origins more inclined to evolutions on degraded tracks. Slight ripples take hold of the machines if you force the pressure on the handlebars a little. 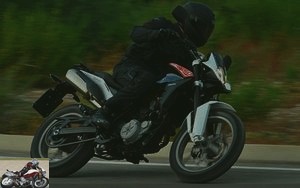 Chaining the ferrule at a good pace, the small 650 cm3 waders reveal a little more a facetious profile. If the Strada is livelier, the Terra logically shows more comfort than its road sister on this ground because of its suspension calibration. However, the front end of the last one seems to offer a better feeling that a longer test could or not confirm..

Mechanical question, the revamped uni-cylinder is celebrating, picking up vigorously at all revs. Beyond 3,500 rpm, it pulls with force and delivers frantic flights 2,000 towers higher. 10 hp more than that of the GS 650 block complete the stud. So there is not much lacking in La Strada to play the supermot ’. A simple fitting of sportier tires would do the trick, especially as the 6 da.Nm of torque happily energizes the machine. Winding at a good pace the sinuous Iberian course, we also enjoy a loud soundtrack. The hoarse accents, specific to the bursts of throat of big monos, hammer the air, both in revivals and decelerations. 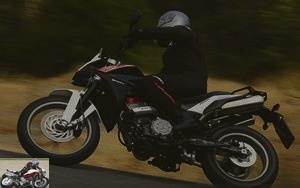 Rather spongy, the grip of the brake lever reveals good progressiveness of the front caliper, offering power perfectly suited to the machine. The rear element effectively seats the TR 650s on a curve, honestly completing the package. Disconnectable, ABS did not manifest itself more than reason.

In off-road use, the shock absorber of the Italo-Germanic adventurer slams a bit on big compressions. The fork, on the other hand, effectively swallows the unevenness of the course. There again, a longer use than that which was ours would be able to refine this analysis. On the road, however, the flexible damping is able to limit ripples on the angle, proves the rigidity of the frame and a good suspension tuning, despite a large travel. 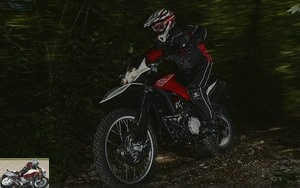 Particularly well born, TR 650 Strada and Terra benefit from a healthy and lively geometry. Their common suspension equipment, however, offers a good compromise between comfort and efficiency for their respective field of use thanks to a dedicated damping profile. 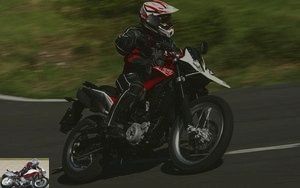 Progressive, the decelerations offered by Brembo calipers show a power in phase with the claims of the machine. On the corner, taking the lever slightly locks the front axle but still allows path corrections. 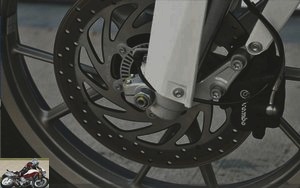 Designed for everyday use, the general ergonomics of the controls and the position imposed on the body provide appreciable overall comfort on both machines. Only the saddle may turn out to be too thin on long journeys..

For the passenger, the situation is even better. Handles, footrests, seat, the accompanying person is very well received on this medium-capacity trail. Finally, for travelers, side cases and top box are available. The latter offers a clever half-opening, allowing quick access to the content.. 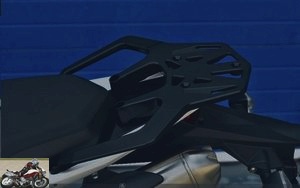 Husqvarna advertises 3.2 liters / 100 km at a constant speed of 90 km / h and less than 4.3 liters for 120 km / h. We were unable to verify these figures but they are in line with the values ​​measured for the GS 650 unit. Consumption, in view of the mechanical and dynamic improvements, should increase slightly.

With these two models, Husqvarna offers simple but serious access to the light trail of everyday life. Targeting city dwellers "commuters" or residents of less urbanized places, the TR 650 Strada and Terra are an effective response to the needs of bikers looking for a light and pleasant ride without sacrificing minimum mechanical convenience. The strong point of these models is, in fact, their pepy engine. Their single-cylinder mechanics must, however, avoid excessively long journeys at constant engine load..

Another good point is their price: € 6,690, ABS as standard, for the Strada, € 6,290 for the Terra. The latter is therefore less expensive than the G 650 GS, which is equivalent in price to the road model. On the Asian side, the Yamaha XT 660 R claims only € 5,990 but its lower performance could not make the difference. Ditto for the Tenere version burdened by a sluggish engine and requiring € 6,999.

If the French market, sacred land of the roadster, seems to lack passion for these light machines, the Husqvarna sisters could well glean the hearts of fans of the genre and seduce a few undecided. Their seductive dresses dispute it with the scathing repartee of the heart which animates them. Succumb to the mischievous Italians?

The technical sheet of Husqvarna TR650