I’m just telling you, and some won’t want to giggle anymore. There will be one before and one after the FTR 1200.
Why ? Because it will radically change the way we see American motorcycles. The image of Peter Fonda and Denis Hopper in Easy Rider in a chopper full of freedom, the thickness of a Terminator on a custom Fat Boy or the stereotype of the bearded man on his bagger…… All of this will be swept away by this flat-track. Because American motorcycles are also sport. Without brakes and while sliding on rings of speed.
So yes, the USA-style motorcycle is a heavy cruiser; and it is now also a roadster that is both hard-hitting and sporty. Unthinkable before the rebirth of Indian. On the road in 2019 !

Not entirely implausible indeed. Harley gave it a go with the XR 1200 X. An … interesting draft … Indian goes much further, with the same discourse but a much more accomplished reality. The idea is to transpose the spirit of the FTR 750, a machine that won the American AMA Flat Track Championship, into a perfectly shameless road bike. The Springfield manufacturer could have been content to change the fork, the handlebars, the toe clips and put a nice decoration. But no, too simple, too commercial. The FTR 1200 is a real novelty, a model that owes nothing to others, using only the engine of the Scout. And again – with a nice dose of mods.

The twin got bigger and by lengthening the piston bore from 99 to 102 mm, the engine manufacturers inflated the airspace to 1203 cm3. A good dose of magnesium to contain the weight, an optimized intake via an airbox above the engine, a strongly increased compression ratio up to 12.5: 1, high flow cylinder heads, twin throttle bodies and a crankshaft with reduced inertia change the dimension of this carton. On hand, 120 horses are ready to tumble, supported in their tracks by a peak torque of 11.7 mkg. It is not yet the ardor of an Italian or Japanese production, but we are witnessing a real new approach to power. Decades of torque and pounding at low revs will now coexist with watts and high revs.

This time, we have enough to weld in the right hand. It is also necessary that the chassis is ad-hoc. This is where Indian is strong: a whole new part-cycle. It was out of the question to imagine any hint of disconnection with a custom base. So, we put away the hack, we heat the gray matter, and voila that the FTR 1200 is given a new tubular steel trellis frame. At its stern are installed a swing arm and a suspension drawing similar to those of the FTR 750 racing. Striking! The tank is hidden under the saddle to lower the center of gravity. The upstream anchors a 43mm inverted fork complete with 4-piston Brembo radial calipers.
Sportsman the FTR; but not radical. A still wise wheelbase of 1524 mm (a 1200 Monster is at 1485 mm), a caster angle of 26.3 ° and a dry weight of 225 kilos prevent it from appearing as a sulphurous machine … but already sacrament sassy for an American. Playing, putting on gas and attacking the provocation are clearly in the specifications.

‘Note, the FTR is not a pure road roadster as befits the regular. Its pneumatic mounting differs from the guns of the category. The shoes display a 120/70 – 19 for the front and a 150/80 – 18 for the rear. With moreover a suspension travel of 150 mm, there would be almost something to feel in the guibolles of a road trail. Confusing ? Not that much. Let us remember that this machine is a road interpretation of the Flat-Track machine, therefore a machine eyeing on gravelly tracks. Suddenly, we seize this choice, we consider crosses on clay, and we validate the profile of specific compounds. Dunlop supplies Indian DT3-Rs with large cobblestone tread, inspired by the world of rican racing.

Let’s go back for a moment to the basics, to the look, to the first glance. This Indian calls out with its style. She doesn’t want to stay calm, and her only regret is the imposition of a huge exhaust. A certain style allows him to save face. The left side of the machine is much more airy.
The FTR 1200 is stripped down in the cockpit. A ProTaper aluminum handlebar, a circular tachometer and a digital window, that’s it; and that’s enough.
It is much more alluring on the lighting side. The rear light manifests a beautiful identity with its illumination. The front optical unit is completely anti-establishment. Round of cover, it houses all in set of LEDs with an assertive visual signature.
And then, no question of forgetting a little additional pleasure in driving. A USB port allows you to connect the GPS or recharge the smartphone. A cruise control will allow you to switch to cruising if you opt for the road rather than the dynamism in virolos.

Falling in love with the Flat-Track, the FTR 1200 copies the codes for a very special road experience, brand new for a production of Uncle Sam. The machine is singular, intriguing (in a good sense), and clearer a new clientele.
The FTR 1200 will also be available in a 70 Kw version which can be clamped for the A2 license. As well as in the S version with better suspensions, more shimmering colors, adapted Ride Command instrumentation, three engine maps, stability control, traction control and anti-wheeling. 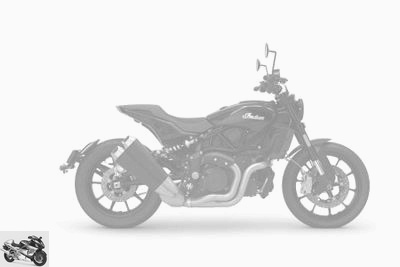 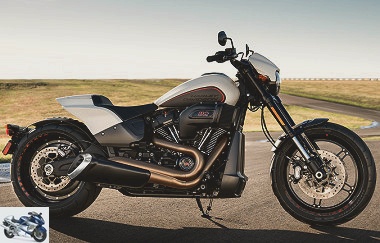 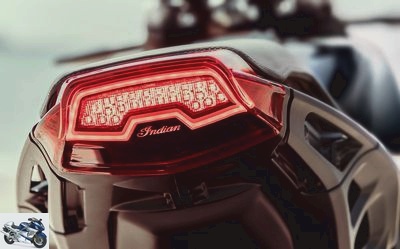 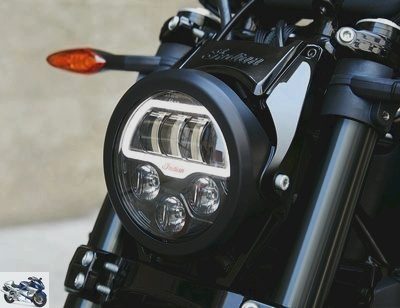 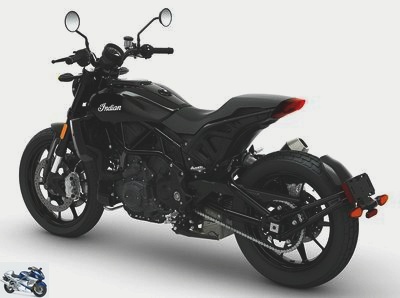 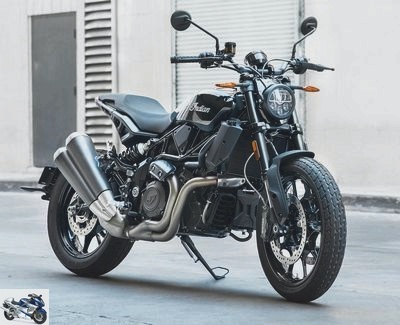 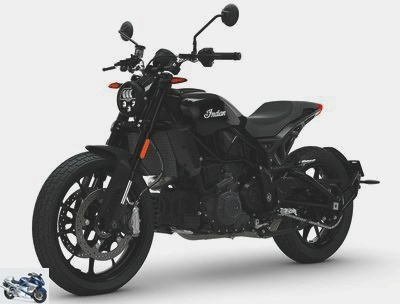 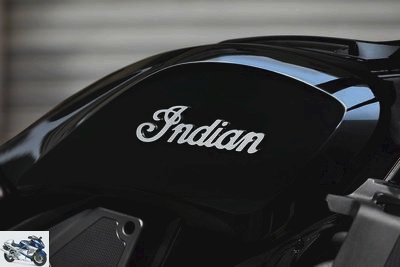 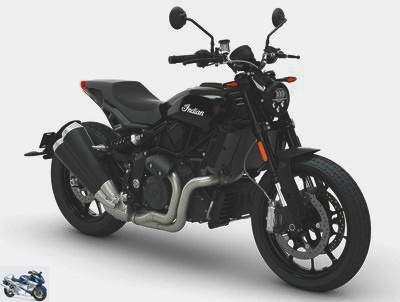 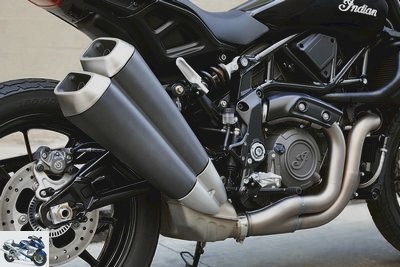 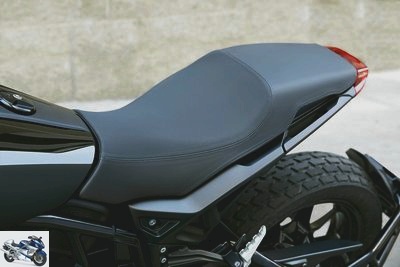 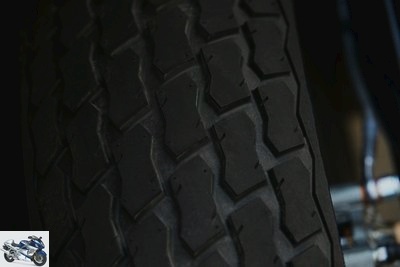 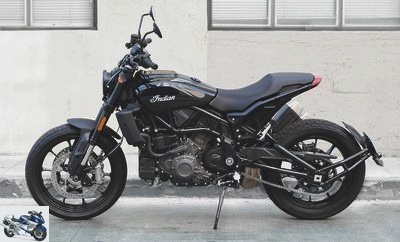 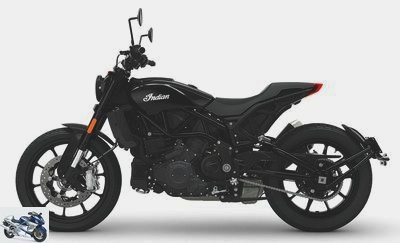 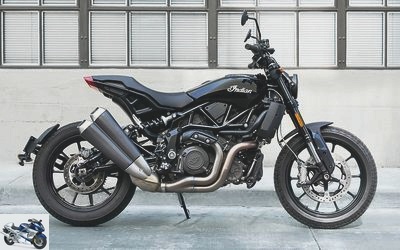 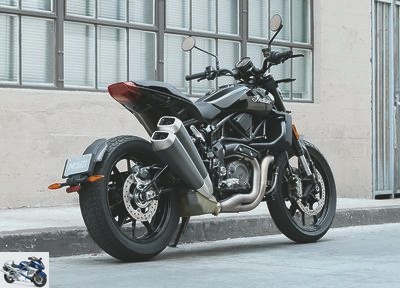 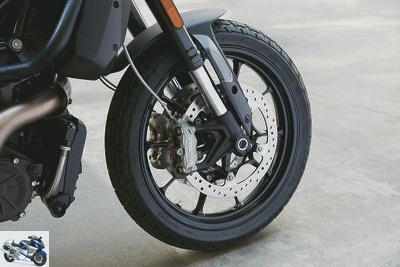 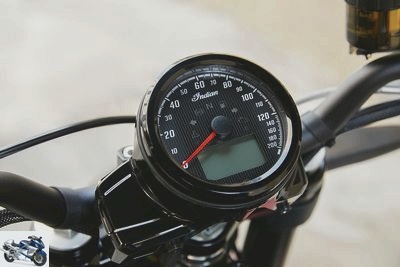