At the crossroads of genres

In November 2018, our colleague Alan Cathcart tried exclusively for lerepairedesmotards.com the pre-production version of the Indian FTR 1200. This time, a few days before the introduction of this novelty in France (around May 15), we were invited to test the final models of FTR 1200 and 1200 S in the United States.

To begin with, remember that Indian, the oldest brand of American motorcycles (1901), has been owned by Polaris Industries since 2011. A company which, after making the difficult decision to discontinue the Victory brand in 2017, has chosen to focus all of its know-how and financial resources on the Indian brand. The revival of this legendary brand could only be achieved by a return to competition. A daring bet but crowned with success since it has been involved in the AMA Flat Track championship since 2017, Indian has quickly established itself as the undisputed leader in its category with the FTR 750. History therefore seems to be starting off on the right foot for Indian, who intends with this model to find its place on the European market against rivals like the Ducati Monster 1200, the new Triumph 1200 Scrambler but also its compatriots Harley-Davidson Sportster. 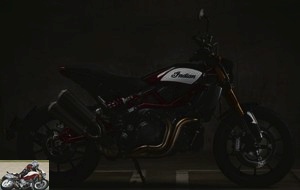 Directly inspired by the Flat-track FTR 750, the FTR 1200 inherits like it a fully tubular chassis, with an integrated motor as a supporting element. The tank is positioned under the saddle to free up space above the engine and accommodate the air box. The overall look is downright successful, with an atypical look halfway between a roadster and a scrambler. Three versions are available: the standard FTR 1200 without traction control and digital dashboard (€ 14,690), the FTR 1200 S with traction control, TFT dashboard and fully adjustable Sachs suspensions (€ 15,990) and the FTR 1200 Race Replica, based on the FTR 1200 S, but equipped with a superb Akrapovic exhaust silencer (17,290 €). 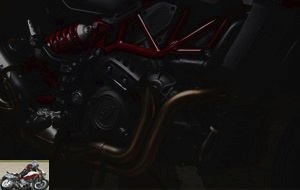 All these versions benefit from a limited slip clutch, cruise control, 100% LED lighting, a USB socket, front braking with double Brembo discs with M4.32 radial 4-piston calipers, as well as a Bosch ABS. Developed specifically for this model and mounted on beautiful 10-spoke aluminum rims, the 19-inch (front) and 18-inch (rear) Dunlop DT3-R tires are reminiscent of the Flat-Track DT3s and effectively contribute to the look of the machine. . The customization possibilities are extensive, with 4 distinct ranges of accessories (Tracker, Tour, Sport and Rally) comprising in all about forty elements. 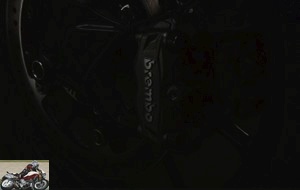 Relatively high saddle (840mm), the FTR 1200 overlaps easily for the 1.80 rider, but will not allow the 1.70 rider to put both feet on the ground. From the cockpit, we appreciate the style and shape of the Pro Taper aluminum handlebars which offer good leverage to steer the bike. The footrests are set back slightly, which encourages the torso to tilt forward, but without pronounced pressure on the wrists at the handlebars. On this FTR 1200 S model, the 4.3-inch TFT dashboard has the particularity of being tactile. A real plus for those who do not want to fiddle with the many controls on the handlebars. 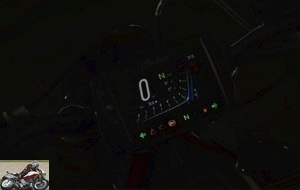 You can thus take advantage of 2 distinct dashboard styles and access the various parameters such as the choice of driving mode (rain, standard, sport) in just a few clicks, as well as deactivate ABS and traction control if desired. These parameters are of course accessible from controls on the handlebars, a small joystick and well-thought-out buttons. On the left hand side, there is also the cruise control command, which is very easy to use. The system can of course be combined with a smartphone via Bluetooth in order to enjoy your favorite music and telephone functions.. 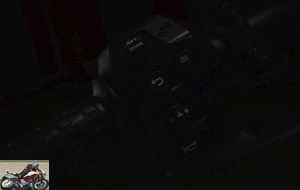 Arranged under the TFT screen, the Neiman contactor could be more accessible but it remains functional. With the ignition on, the dashboard lights up in the brand’s colors, followed by a screen warning you of possible dangers in the event of lack of attention. It is necessary to validate to go to the next screen, which can be tiresome in the long run. The default dashboard is then displayed, consisting of a central dial with tachometer, tachometer and gear indicator engaged, surrounded by small dials (fuel gauge, temperature, mileage and a compass indicating the direction taken. On the right edge, we find the clock, the driving mode reminder and traction control. The second display actually offers the same elements, but arranged differently on either side of a large account- digital revolutions A brief press on the starter button and the American V-Twin finally reveals its pleasant sound. Nothing too deafening, don’t worry, the Euro 4 standard has passed by…. The melody relayed by the exhaust 2-1-2 remains however pleasant to the hearing, especially on the Race Replica version equipped with the Akrapovic silencer. 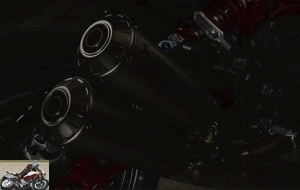 Natural and docile, the FTR 1200 quickly gives its user confidence. Well balanced, it benefits from a turning radius for easy maneuvering and quick U-turns. Very stable, it allows to wind on a trickle of gas in the urban cycle thanks to the consequent torque of its twin cylinder (120 Nm at 5900 rpm) and the assistance of its limited slip clutch which facilitates gear changes and minimizes the effort required on the lever. It is possible to cruiser around 2000 rpm in sixth gear while still retaining a smooth cranking capacity when you put the gas back on. Reports are linked and locked in a precise manner, without false notes. 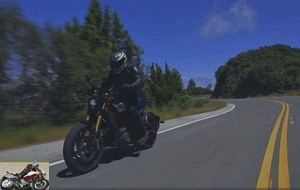 The Pro Taper handlebars, for their part, offer a very good grip on the bike and promote angle grip. Against all expectations, given the particular profile of the DT3-R tires, the angle takes place in a round and progressive manner. The same goes for the quick angle changes, thanks to the good lever arm of the handlebars but also to the chosen wheelbase of 1524 mm and the column angle of 26.3 degrees which obviously give the FTR 1200 a good compromise between agility and stability. The Sachs fork and shock absorber, fully adjustable (preload, compression and rebound) on this FTR 1200 S, perform their role perfectly by effectively absorbing surface imperfections such as larger shocks. 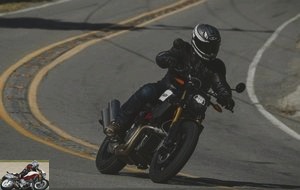 Angle taking is easy and progressive

Stalled at constant speed on the fast track, the FTR 1200 S finally delivers some vibrations at the level of the accelerator and the footrests. Nothing prohibitive, don’t worry, especially for a large twin-cylinder 123 horsepower at 8250 rpm. Even at a faster pace, this bike retains excellent stability. The lack of protection for the driver’s chest, as well as the discreet but very real presence of the local police, do not, however, encourage playing the accelerator for too long on this Pacific Coast Highway limited to nearly 90 km / h…. However, this is a good opportunity to test cruise control. Its implementation is easy and very intuitive. Pressing the button dedicated to the left stalk to activate the system and another on the minus control to engage it with the current speed. Simple presses are then enough to increase or reduce the speed, an action on the brakes deactivating it immediately. 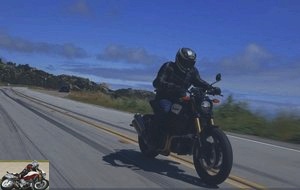 By approaching relief more favorable to the analysis of the road behavior of this FTR 1200 S, we have to recognize that the machine shows a beautiful homogeneity and a surprising agility. The only point of reluctance at the start of the course on roads dampened by the morning fogs, the relative confidence in this pneumatic ride certainly reminiscent of the Flat Track spirit but a little too flat and lacking a shoulder on the rear for my taste. It is in this context that we appreciate knowing that we are assisted by on-board electronics, in particular traction control and ABS when cornering…. However, as the road gradually dried up and confidence was reborn, the FTR 1200 S was finally able to demonstrate its full potential.. 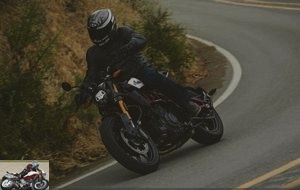 One thing is certain, the chassis geometry is perfectly suited to winding roads. The machine fits very naturally on the angle, swiftly from one turn to the next and holds its course perfectly in turns. The manufacturer announces an inclination angle of 43 °, a value that I am not sure I have reached because at a certain angle the rear tire begins to announce that the limit is no longer very far by frequently initiating small slips. . The suspension works in perfect harmony with this chassis, withstanding the biggest shocks without overreaction and significantly contributing to driving pleasure. 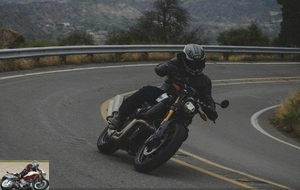 The Indian twin is very comfortable in this context. Powerful, full of torque and endowed with low revving inertia, it responds to the slightest demand, even when under revs. The response to acceleration is straightforward and manly, but can be disrupted by the preventive intervention of the traction control on bumpy roads, generating some micro power cuts in this context. By changing the driving mode, from Standard to Sport, the observation remains more or less the same on this point. As the miles go by, confidence in the FT3-R pneumatic rider improves to the point of allowing yourself a few decent angles, but not without a little bit of trepidation. With good reason, no doubt, since a colleague driving with all assistance disabled unfortunately paid the price by reaching the tilt limit of these tires. Fortunately without damage for him (thank you for the airbag). 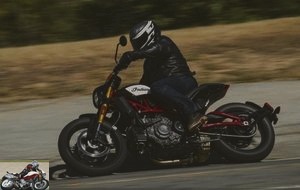 The Twin of the FTR always responds

Easy to access despite its saddle height of 840 mm, the FTR 1200 benefits in this final version from a much more comfortable saddle than the pre-production version. The arch in the crotch is a bit wide, however, but you get used to it. On the other hand, the possible passenger will have to deal with footrests located far too high and a lower seat than that of the pilot. 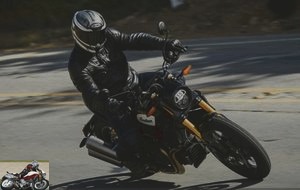 The saddle perched at 840 mm is quite comfortable

The braking provided by the Brembo 320 mm double front disc with 4-piston radial calipers is very effective, both in power and in progress. Easy to dose, it has good bite and does not lock the steering too much when used in curves. At the rear, the 265 mm disc with 2-piston caliper perfectly complements the front brake and allows the bike to sit on a curve if necessary, without the risk of inadvertent blocking because both front and rear are assisted by Bosch ABS (can be deactivated). 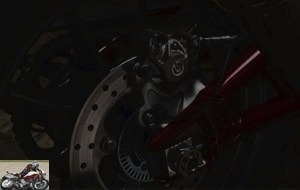 The rear brake of the Indian FTR 1200 S Race Replica

Testing on the other side of the planet is good, but we have not had the opportunity to verify a real measurement of consumption. However, Indian announces a real range of 200 km with the 13 liter tank, which gives an average consumption of about 6.5 l / 100.. 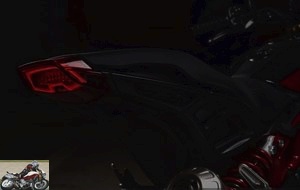 The FTR 1200s all have a fast-charging USB socket, handy for powering your GPS or recharging your smartphone. At this price level, on the other hand, we would have appreciated elbow tire inflation valves, which are more practical than the straight valves used. On the other hand, only owners of an FTR 1200 S will benefit from the digital touch screen, hyper functional and practical for use by many biker geeks.

This Indian FTR 1200 S is a nice surprise. Superbly designed, with a tubular chassis that is as aesthetic as it is rigorous in action, as well as a modern V-Twin, powerful and full of torque, this bike is a priori ready to face the European competition, Ducati Monster 1200 in head. It remains to be seen how European bikers will receive this American brand, which is admittedly old, but which has a still small dealer network in our regions.. 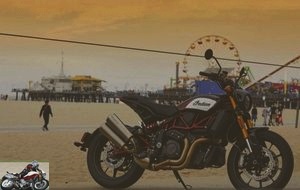