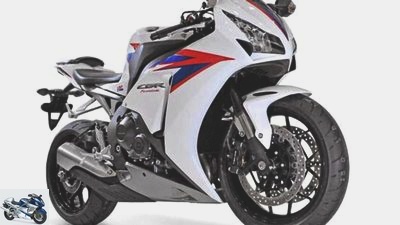 Innovations: the future of super athletes

Innovations: the future of super athletes
Where are you running to??

The racing replica segment is in a state of upheaval, which the Europeans in particular are promoting. In 2012 they will keep the initiative. However, a strong reaction from Japan is preparing.

Innovations: the future of super athletes
Where are you running to??

The market development cannot be reduced to the question of vehicle concepts alone. The overall economic situation led to a noticeable reluctance to buy among the mostly younger Supersport customers, especially in the 600 segment. Where are the vehicle concepts headed? We believe that there is no longer any need for significant increases in performance.
Weight reductions in individual components are to be expected – for example in the chassis control systems. They have already significantly improved the drivability in everyday use. In the area of ​​chassis technology, there are still possibilities to further improve drivability. In addition, the suitability for everyday use can be increased. The possibilities offered by innovative design are also far from exhausted. Super sports engine-
bikes with their proximity to racing have lost none of their fascination.
Simon Warburton,
Product manager triumph
I think the decline in the popularity of super sports bikes is due to the economic environment. In total, this market is now less than a quarter of what it was five years ago. Back then, motorcycles were extreme, and all the signs indicate that people will continue to want them. They just can’t or won’t pay them in the current economic climate. I’m not sure whether we’re really close to an absolute limit in terms of driving dynamics, but future registration regulations will make it more difficult to get ahead with classic means. The integration of intelligent electronic systems for control
engine and chassis will probably make the biggest difference between today’s super sports cars and those in five years.
Romano Albesiano,
Aprilia Head of Development
It doesn’t help: Part of the character of a super athlete is that the performance continues to grow and the motorcycle becomes more and more radical. This inevitably leads to the segment narrowing continuously. Nevertheless, I am convinced that the super athletes will survive: On the one hand, they are the flagships of many manufacturers,
on the other hand, there will always be fans who want to drive and own such motorcycles. The radicalization of super athletes also gives rise to the opportunity to develop new motorcycle categories that present the sporty approach in a different way and thus make it accessible again to a larger group of motorcyclists. There are examples of this, also in the areas of enduro, supermoto or cruiser. There are numerous ways to improve the driving dynamics of super athletes. We still have a few innovative ideas – but we guard them jealously.
Diego Sgorbati, Ducati Marketing Director
Super athletes have to fascinate and convince. They are still the icons among motorcycles and make fans dream. For us, the development guidelines are top-class performance data, a breathtaking design and technological innovations. With them we aim on the one hand to improve driving dynamics, but also on the pure joy of owning one of these great creations of modern mechanical engineering. When it comes to technological innovations in particular, we have a lot up our sleeve. But to find out more, you have to wait until November.
Paul Rowney, Suzuki
International Europe
Certainly the current sports bikes have reached their limits, especially those of our imagination, but that has often been the case. My observation goes in a different direction – including the streets-
motorcycles have perpetually
in terms of engine power, braking power, and chassis quality, and the limits of what can be achieved have already been reached in many cases. They just got better and better and have ousted the sports motorcycles in the favor of many buyers. Future supersport motorcycles must offer an approved basis for simple, modular conversion for the racetrack. There will be two variants here:
1) Entry-level motorcycles with proven driver assistance systems. A good base that the hobby driver chooses to have fun.
2) Premium motorcycles that
Can be made suitable for the race track in just a few simple steps
are. With all the refinements for
very dedicated drivers.