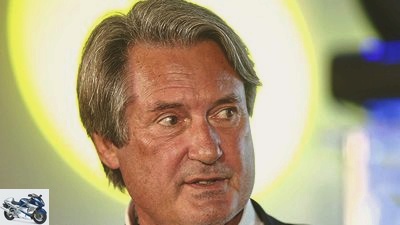 Interview with ADAC Motorsport President Tomczyk
“Platform for the young”

The 2016 Superbike IDM season began under difficult circumstances. The German motorsport federation DMSB didn’t seem to be particularly interested in the national motorcycle road championship. That made the work for the promoter MotorEvents more difficult, as did the withdrawal of the ADAC from the IDM. MOTORRAD asked what the ADAC’s ideas about the function and format of the top series in national motorcycling were.

Interview with ADAC Motorsport President Tomczyk
“Platform for the young”

Mr. Tomczyk, how do you assess the current situation of motorcycle street sport in Germany?

The situation is difficult, since it has apparently not been possible in the past two years to put the Superbike IDM as the German motorcycle road championship on a platform that those involved in the IDM would like. This also applies to the ADAC, which was represented in the IDM with its Junior Cup.

Do you think it is important that we have a well-functioning national road championship in Germany?

I am convinced that it is very important to have a decent platform in order to be able to train the next generation. Where else would a Markus Reiterberger have found the stage from which he has now advanced to the Superbike World Championship? Or a Matthias Meggle, who has now made it into the Red Bull Rookies Cup?

Basically yes. With the understanding that we now have to do something with the Moto3 class. And that the German market is apparently too small for such a Moto3 project and therefore needs to be Europeanized. With the Northern Europe Cup launched by the ADAC, we are trying to make Moto3 a topic for youngsters that is interesting for young starters with as many Grand Prix tracks as possible.

Last year the Northern Europe Cup and the ADAC Junior Cup ran as part of the IDM, this year the ADAC has dropped out. What was the reason for leaving? Too high financial demands of the IDM promoter MotorEvents or dissatisfaction with the current form of IDM?

I will not criticize anyone who does their best to get the IDM up and running. We have fundamentally different ideas about some topics. The assessment of whether an IDM pool partner pays too dearly for a certain service or not is rather irrelevant. We took on the Moto3 series when the class was no longer advertised and held on to it even after initial difficulties – that would not have been possible in the IDM. But in the end it is not about having the highest possible number of starters in all classes.

Because the ADAC is withdrawing its Junior Cup and the Northern Europe Cup from the IDM, the IDM promoter lacks well-staffed racing classes and thus the income from their entry fees. So this does not help stabilize the IDM. How can this problem be solved?

Good question. But during the time when I was responsible for motorcycle racing at both ADAC and DMSB, there were several decisions that initially looked unreasonable or unpopular, but later turned out to be the right way to go. Where did motocross stand eleven years ago in Germany? Back then it wasn’t popular that we took the International German Motocross Championship to the ADAC, redesigned the classifications and installed the juniors as a substructure. None of this work, they said. But it works quite well. Perhaps as time goes on, whether they are popular or not, you have to break new ground.

With this in mind, should a new format for the national championship, the Superbike IDM, currently be found? To get more people interested in the sport and to lure them to the racetracks?

Basically – and this applies to all of motorsport in Germany – you have to constantly put everything to the test and ask whether everything we offer is still the right thing. I don’t presume to say: Do it this way and that in motorcycle racing, then it’ll work. The average number of starters in motorcycle races is problematic. When I drive on beautiful racetracks like the Nurburgring or the Hockenheimring, the costs are much higher today than they were a few years ago – whether that’s the track rental, security or insurance costs. An IDM event according to the current format on the Nurburgring can no longer be refinanced for a normal organizer. This is why motorcycle specialists have to think about new ways. As the DTM has tried with the IDM Superbikes – maybe there are more favorable schedules for such a weekend, with which the costs can be contained a little. In my opinion, the races themselves are extremely interesting, especially in motorcycle racing. So it can’t just be the quality of the show or the drivers. Nevertheless, one has to ask oneself whether something can be done differently to make it work better.

In your opinion, is there too little going on at the Superbike IDM? Maybe because MotorEvents has its hands full with making ends meet financially?

I honestly don’t think so. Nobody should believe that if you do everything that is good and beautiful, things will work out the same. I still remember the time when the DMSB did the IDM. It said: We need television, we need this and that in the paddock, we need large hospitalities. I believe that sport itself doesn’t need any of that. They need a platform that is so attractive that spectators come – whether they are pure racing fans or whether these will be family events in the future.

Does motorcycle sport in Germany have the problem that, compared to automobile sport, it has a much smaller industry behind it, with smaller budgets for supporting motor sport?

That is certainly a basic problem in motorcycling, because money is much tighter. That is why the question must also be allowed as to whether the IDM is to be set up from scratch and then rebuilt until one has reached a high level again.

You and the ADAC are of the fundamental opinion that a national championship should be there so that German talents can prepare for a future on an international level there. The manufacturers and importers who are currently saying where to go in the Superbike IDM, however, have little interest in such youth work. Is it disturbing that the industry is such a big influence?

How much space do you have in your exercise book? This is a huge topic that should be discussed again separately. If young people cannot race with us at a competitive level that shows what their performance looks like in an international comparison, it doesn’t make sense for the boys either. So far it has been the case that someone who won the IDM 125 three times here and started in Spain for the first time then drove in the back third. We have to have a strong national team in a sensible competition. There could possibly be fewer and larger classes or simpler regulations.

In principle, the IDM is in good hands at MotorEvents. But there are also such big problems that MotorEvents could no longer be available as a promoter for the future of the IDM. The ADAC would be willing to step in as the organizer?

We’ll first watch the season. First of all, however, I hope that our two series will continue as well. You don’t have to hide the fact that the ADAC Junior Cup could be more crowded. We are working on that, but we cannot carry the possible participants onto the motorcycle. Paying everyone their full stake would be the wrong development. So we have to see to ourselves how we can get the Junior Cup back to a better place. If the ADAC Northern Europe Cup goes as it is now, it would be a good start. And if the IDM, which this year also has extremely strong classes with good drivers and teams, is more or less at the previous level, nothing speaks against thinking about doing one or the other together again for 2017.

Possibly with the ADAC as a promoter, if someone should be sought for 2017?

At the moment we do not have the impression that it is desired that we take on the promoter role. There is a promoter – so this question does not arise for us.