On paper, we imagine that the Kawasaki Ninja 250 R, with only 33 horsepower, will only appeal to the young drivers. After a week of testing, this mini Ninja turned out to be much more than just a starter, capable of performing all tasks and delivering real driving pleasure, all for (all the same) some sacrifices ….

The Ninja 250 R appeared very opportunely here in 2008, marking the return of (very) small sports machines in France.. However, this machine is not strictly speaking a novelty since it is extrapolated from the old GPZ 250 which appeared on the Japanese market in 1983. In 25 years, this sports microphone powered by a vertical twin has nevertheless undergone 4 major evolutions and It is therefore this fourth iteration that has landed in France. “Strong” of 33 horses, it has already made the happiness of several hundred young first-time buyers of the motorcycle license, placing itself in double alternative of the slew of scooters which make up the majority of the 250 cm3 offer today and of the big ones. roadsters bridled with 34 ponies …. 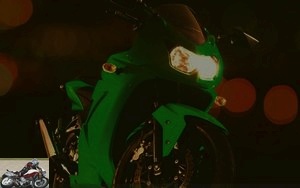 Set on its kickstand, this Kawasaki catches the eye with its unusual proportions. Slimmer than a 600, while offering the size of a "real motorcycle", it is ultimately the size of its tires that hints at the small displacement of our mini-Ninja. Of course, the rims are 17 inches, but the socks of this Kawasaki, from the Japanese manufacturer IRC, are limited to 110/70 at the front and 130/70 at the rear (the equivalent of a front tire of a 600 cc). 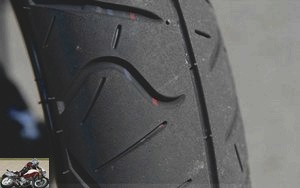 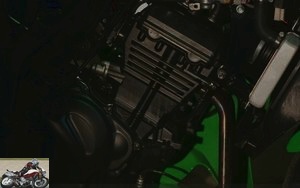 Despite this small frail side, the measurements of the Ninja 250 R are harmonious with an integral fairing with an aggressive design and a rear portion with a design lightened by a double-stage saddle. And without taking up all the stylistic codes in force on the brand’s big sports cars, we know that we are indeed in the presence of a Ninja, even if it was pocket-sized…

Under this modern dress, we find simple, solid and proven: the steel frame is of the “diamond” type, the classic 37 mm diameter fork is devoid of adjustments and the rear shock absorber mounted on a rod ( almost a rarity these days….) is entitled to a five position preload adjustment. The vertical twin injected with super square dimensions (62 x 41.2 mm) develops 33 horsepower at 10,500 rpm and 22 Nm of torque at 8,200 rpm. Braking is provided by a single 290mm “petal” disc clamped by a caliper with two parallel pistons at the front. A more modest 220mm element mated to a dual piston caliper officiates at the rear. 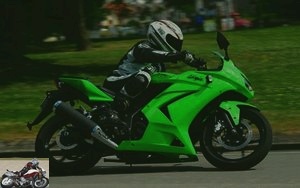 Overall, the finish is good, even very good: painting to Japanese standards (the machine is assembled in Thailand), fine-tuning of the bodywork components, well-hidden wiring, anodized castings, rubber-coated footrests, etc..

The space under the passenger seat even hides a space designed to accommodate a specific approved anti-theft device. There are still some “cheap” details. We can easily forgive the choice of a swingarm with a square section, very basic. But the dashboard designed by Playskool is definitely from another age, as are the old roller odometers, vestiges of the last century.. 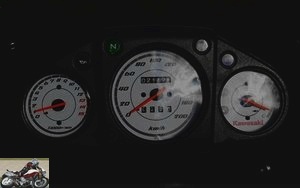 On the color side, Kawasaki has abandoned the very attractive two-tone black / white version that appeared in 2011, the 2012 versions returning to the black or green classics offered since 2008 …. 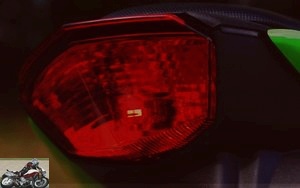 Unless you’re a garden gnome, getting on board is no problem. The saddle, very narrow in its central part, is only 790mm high and a 1.70m rider will have both feet firmly planted on the ground while keeping the legs flexed. A good point for beginners, short legs, girls or all three at the same time…. And if the technical sheet announces 169 kg all full (the equivalent of a KTM Duke 4), the movements of the machine at a standstill suggest that it is at least ten less.

Let’s continue with the good news with the saddle handlebar footrest triangle which offers a very natural riding position, tilted slightly forward and which will suit most people. On the other hand, no adjustment of the levers is planned. And for the information distilled by the dashboard, it will be necessary to be satisfied with the minimum vital: speed, revolutions / minute, engine temperature, a trip, a warning light of passage in reserve and basta. 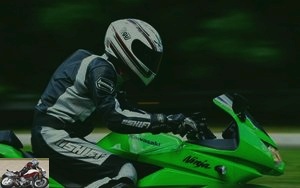 In use, the Ninja 250 R is particularly comfortable in urban settings once you have learned how to use the engine. Lacking flexibility under 2,000 rpm, the vertical twin is relatively soft below the 5,500 rpm mark. And to get the full essence of 33 horsepower, you have to stay between 8,000 rpm and the red zone, with thrust remaining constant up to 12,000 rpm despite a maximum power announced 2,000 rpm earlier. In fact, after a few days spent riding this 250, we instinctively maintain the engine around 5,000 rpm. Admittedly, the engine accepts to resume in sixth at 2,000 rpm, but an octogenarian riding a Velib "will humiliate you on a repeat test…. Once the mill is kept in the “right” range of use, we can then take advantage of all the qualities of the chassis.

Thin, lively, nimble, the Ninja makes it easy to squeeze through traffic, aided by a narrow fairing and half-handlebars that are much narrower than conventional handlebars. The nose gear, neutral at the angle, quickly inspires confidence and the turning radius is more than enough to make a U-turn without maneuvering. Finally, special mention to the suspensions which have adapted wonderfully to holes, bumps, connections and other retarders, largely making up for the thin foam devolved to the rear of the pilot.. 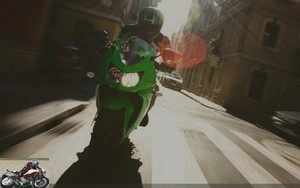 Despite its modest power, this 250 is far from being a ninja turtle (sorry). In sixth gear, stalled at 130 km / h, the engine purrs at 9,000 rpm, far from the red zone and then consumes barely 4 liters / 100 km. At this pace, the fairing sides effectively protect the legs. For my small build, the bubble properly deflects air from the bust up to 140 km / h, leaving the shoulders and arms exposed. But to "eat the kiosk", and take advantage of the more than 400 km of autonomy offered by the 17-liter tank, it is better to opt for the adaptable bubble available in the catalog of house options. 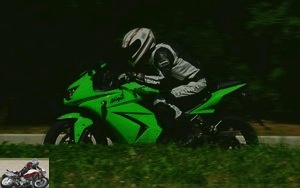 On an open section, the odometer climbed to 170 km / h despite a Cx which was quite degraded by a large backpack. During its presentation to the press, colleagues managed to block the counter at 180 km / h (nearly 160 km / h in real speed). But whatever the conditions, be aware that, with small displacement, the quality of the gasoline has a direct influence on performance, notably with a significant gain during high speed pickups when the twin carbides to the SP98. The weight also changes things quite a bit…. With a passenger, the Ninja loses much of its splendor, even forcing several downshifts to attack a hill that is a little too steep.. 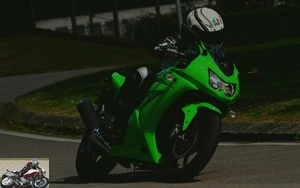 On tortuous paths, the fun capital of this Ninja is surprising. The lightness of the cycle part and the good suspension tuning allows many fantasies and the metallic howls of the twin in the last third of the tachometer are a feast for the ears. Certainly, in absolute terms, the thrust is nothing short of mind-blowing in the face of the 100 horsepower of a 600 roadster. But the acceleration is more than enough to excite the throbbing one and we start to tickle the red zone by passing the gears to the fly to extract the quintessence of the last canassons. Especially since the grip offered by the tires allows you to twist the accelerator without a second thought. By pushing the cap a little too far on an open road, it is even possible to come to the end of the ground clearance without making a cold sweat…. in the dry. Because on wet asphalt, that’s a whole different story. The IRC tires originally fitted to the Ninja 250 R then seem incapable of heating up and are terribly lacking in grip, even going so far as to suddenly stall on certain concrete sections. In short, unless you change tires, it is better to drive carefully in the rain.. 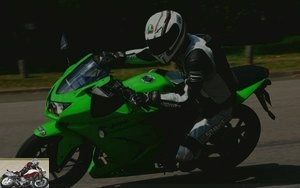 The single disc does its job very well, with a progressive attack and a power largely sufficient for the performance of the little green. Well, the lever lacks feeling on very high decelerations, but simply replacing the original hoses with aviation type models should improve things a lot. The rear element correctly fulfills its dual role of stabilizer and additional braking but can indulge in a few unexpected lock-ups in the event of strong deceleration in the wet, always due to the tires …. 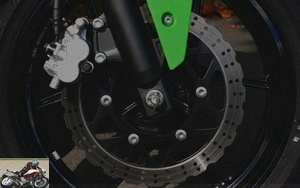 You don’t need a crystal ball to guess that the passenger seat will only be useful for troubleshooting…. Small and thin, it will tan the rear end of the sandbag long before that of the pilot, and the too high footrests impose a position as racing as it is uncomfortable. 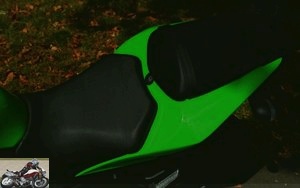 Do not expect to put anything under the saddle, or a mini disc block. 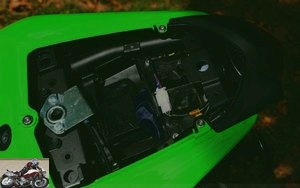 Apart from the high screen mentioned above, the Ninja 250 R can also be fitted with various cosmetic accessories such as micro-indicators, wheel trims, tank protection…. Two exhausts, including a non-approved model, are also available in the manufacturer’s catalog..

Small displacement often means low consumption and indeed the Ninja consumes on average less than 4 liters / 100 km. The 17-liter tank then offers no less than 400 km of autonomy. When you think that some big guys are struggling to exceed 150 km of autonomy, the Ninja gives them a real thumbs up. 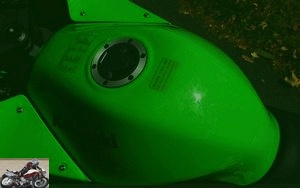 The smallest of the Ninja perfectly fulfills its contract as the first motorcycle for young drivers and can even appeal to experienced bikers looking for a "good horse" to transport them on a daily basis. Because under this sporty appearance hides a machine with obvious handling coupled with reassuring handling, all for the lowest cost of use (consumption, maintenance, consumables, insurance) compared to a classic roadster, even restrained. Moreover, this power deficit in the face of the latter has never proved to be a real handicap during the week spent on his handlebars. Better yet, the 33 horsepower twin is capable of handling all conditions (except duo) while delivering a good dose of fun. On the condition of course of adhering to the very sharp character of this twin. It is also on this last point that it stands out from its only real competitor, the Honda CBR 250 R. The latter, powered by a single cylinder, is certainly less powerful (26 hp) but requires instructions for use. less demanding. There remains the thorny subject of the tariff. This Ninja 250 R is officially priced at € 4,999, i.e. € 1,000 more than the Honda and € 1,000 less than its other potential rival, the ER-6n ….