The sun is setting in 1988. It has been a few years since Suzuki left a racing mark on the road with its 750 GSX-R. As for prestigious sports cars, the explanation rages between the Honda RC 30, the Yamaha FZR 750 R, the Ducati 851 and the Suz GSX-R 750 R. Beautiful linen … which does not suit Kawasaki’s business. Its aging GPX 750 has neither the means nor the philosophy to compete (although it does pretty well in Promosport). Unbearable for the Akashi brand, with a glorious sporting past (750 H2, 900 Ninja, etc …) and whose competition ZXR-7 is very competitive.

Here is the answer of the Greens, and the birth of a fantasy for all Kawasakists. As the regulations in Endurance and Superbike limit the displacement of the 4 cylinders to 750 cm3, the new sports car from Kawa will be a 3/4 liter. And not just any! Kawa only takes its engine from the GPX, seriously reworks it, and creates a whole new machine around it. Thus was born the ZXR 750 STINGER. An equivocal first name, a long line, a threatening face; this machine does indeed smell the surface-to-surface missile at full nose. Take a combarde, a racing helmet, choose the color green-white-red and you will have the impression of being at the start of the 24 hours of Le Mans with the factory ZXR-7 (it finished 2nd in 88).

Question look, we are not disappointed. Nervous double optics, long sporty fairing, triple-spoke rims painted in the dominant color, reinforced swingarm, and the must: 2 pipes drawing air through fairing vents to dive directly into the tank. Damned! Are we facing a prototype? No, a production machine; and even if the role of these ducts is limited to … bringing fresh air to the cylinder head (the breath goes directly to the carbs on the ZXR-7), the little magic side and the racing illusion operate.
Let’s undress this Stinger and see what she’s hiding under her tricolor combarde. Exposed, the sportswoman cannot cheat. Does she tremble? Not at all, because its chassis and guts testify to the importance Kawasaki places on its new spearhead. Imposing, the new frame follows the trend of modern sports cars: a perimeter assembly made up of two aluminum spars welded to foundry plates. Called E-BOX FRAME, it also uses two removable lower cradles for a double mission: a little more rigidity and to support the fleet and oil radiators..
As for the wheels, no need to worry. The fork, which is not encumbered with an anti-dive system of more than doubtful effectiveness, finds at the end of its travel 2 discs of 275 mm and 4-piston calipers. Braking has good, consistency and power, and a certain firmness in the control. In terms of adjustment, the front has hydraulic preload and rebound. The shock absorber is only adjustable in preload. But the link it anchors on has a handy competition trick. The binding is mounted on an eccentric, which makes it possible to vary the attitude of the machine without interfering with the settings. No doubt, no ambiguity, this 750 wants the track. A very legitimate feeling for this renewal of the Ninja spirit. But once on board, you realize that the beast is not that exclusive. The driving position is sporty, without excess, the handlebars placed not too low, and the surprisingly easy handling would make it almost an everyday sportswoman. In town, it remains bearable, although the 230 kgs have difficulty in being forgotten. Normal, this is not the environment in which a future Superbike will express itself. It is in the big curves that she lives, where she makes a good demonstration of her stability at high speed. Homogeneous and more accessible than its racing design would suggest, we could only blame it for a certain stiffness. A little more agility on the menu and she would be on top.

A growl, a muscle, teeth escaping from the lips, punch, needles that go all the time to the right: we expect that from a Kawa mechanism. However, there is no question of developing a crazy mill like the V4 of the RC 30 and announcing a stifling price – Kawa wants his Ninja to be accessible, that we can drive without making a 1,000-year credit. By recovering the block of the 7 and a half GPX, the engine manufacturers had to do a big job to make it as exciting as the machine that was to welcome it. First, let’s breathe. A good 36 mm (+ 2 mm) carburetor manifold arrives on intake ducts straightened by 45 °, resulting in a more straight gas flow. The cylinder head is brand new, with valves actuated directly by the cams (ciao the latches). In the cylinders, the compression increases a chouïa from 11.2 to 11.3 to 1. The low engine hardly changes but there is a lightened vilo and a modified clutch equipped with an automatic disengagement system in the event of too much torque. returned by the rear wheel on deceleration. A new stainless steel pot takes care of the song of the boiler – in 90, the 4 in 2 in 1 is replaced by a 4 in 1, as in endurance. Suddenly, the oil filter moves from its ambiguous position to find itself attached to the oil pan. The engine recovers some of the parts from the factory kit, overhauled camshafts and larger valves. The swingarm changes shape, the carbs gain 2mm in diameter, the radiator is bigger, and, as a bonus, the mirrors are painted in body color. At the exit of the gas, the soundtrack keeps its score and its vocalizations. And what a song! A rattle coming from the back of the throat and bubbling from the towers. In the exercise of approval and potency, this 750 has no lesson to be learned. No need to wait the 10,000 tricks for him to start the demonstration. The horses begin to tumble with envy towards the mid-range, dragging the cavalry up to 8,000 revs where the big potato arrives with vigor. It may be civilized, the mechanics unrestrainedly distributes a sacred character, to stick the banana until you are thirsty. From the top of its 107 horsepower, the Stinger tumbles at over 240 km / h. This is enough to calm a lot of people and build a reputation.

Exciting, conveying a strong image and a provocative name, efficient, homogeneous and impactful, much more accessible than the fantastic Honda RC 30 or Yamaha FZR / R, the Kawasaki ZXR 750 Stinger combines many qualities. It allows the manufacturer to reconnect with a definition of essential sports: driving pleasure and a distinct character as well as sharp..


on 20 opinion
users
Read the reviews 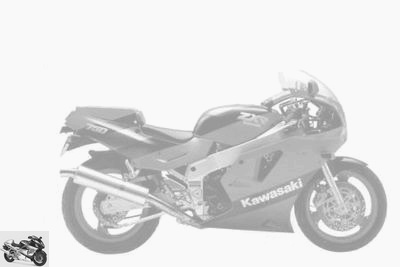 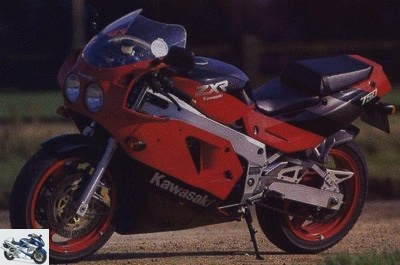 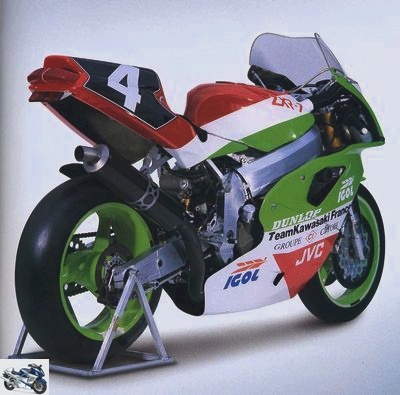 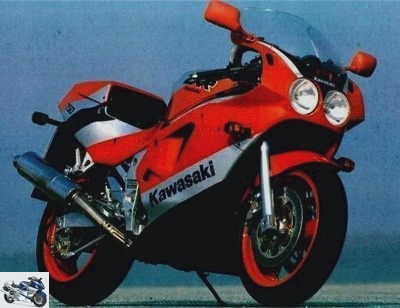 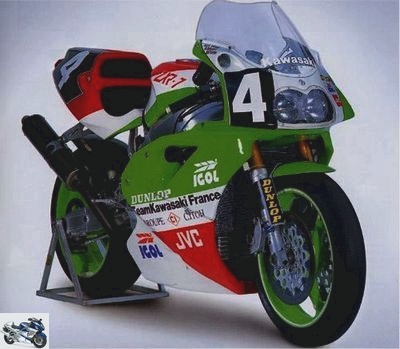 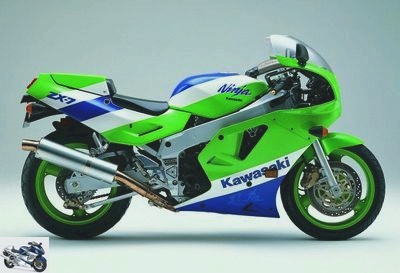 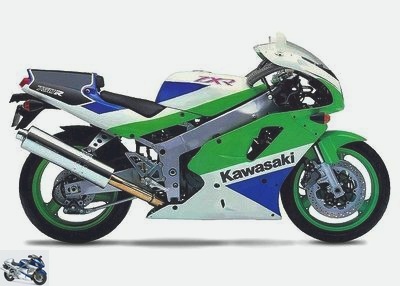 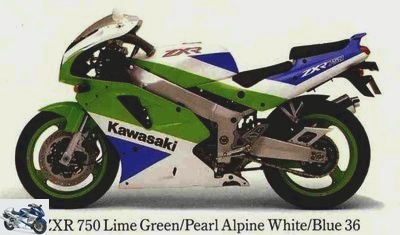 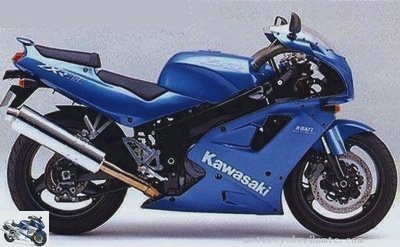 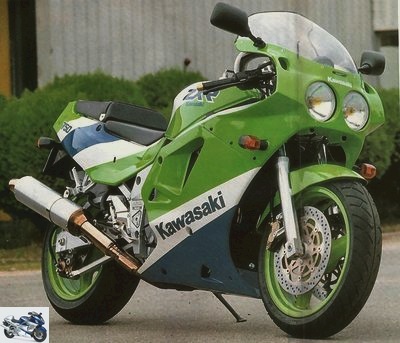 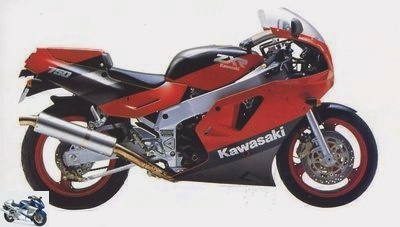 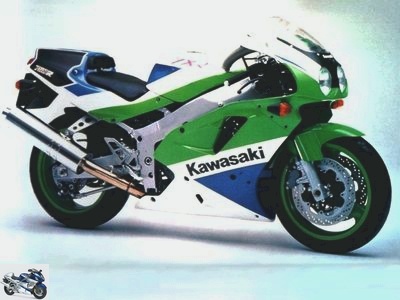 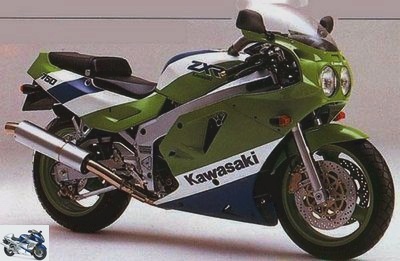 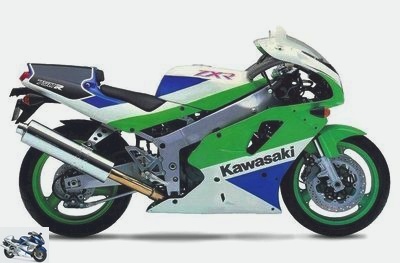