Test carried out during a "Track ‘N’ Test" day on the Bresse circuit.

Beyond the displacement and the power, the RC8R gains a longer wheelbase, a reinforced clutch and an optimized gearbox supposed to improve the precision of gear changes. On the look side, the ‘R’ adopts a carbon front fender, black anodized treatments and Marchesini forged ten-spoke rims (against cast rims). 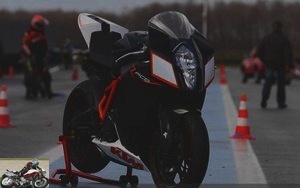 The RC8R first impresses with its prominent lines, truly cut with a billhook, a complete break with the more curved lines of the Japanese models. Between the vertical front optic and the tapered rear, the taut lines accentuate the aggressiveness and sporty aspect of the model, confirming a look unique to this superbike. We admire the swingarm in cast aluminum parts.

In its tricolor dress, dressed in a mat black, an orange tubular frame, a back shell and a white shoe, the RC8R stands out from the RC8 which looks almost sober on the side! Even up close, the finish is impeccable, at all levels.

The settings are in the track position: suspensions, position of the footrests, of the saddle, of the attitude to the highest, the position is as far as possible forward to favor maneuverability. The preparation of this standard RC8R (but in free version) – a model without its indicators, mirrors, license plate holder and passenger footrests – takes the pilot directly to the pre-grid. 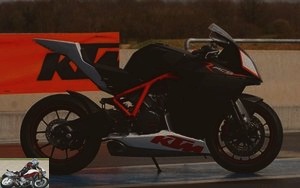 The first impression on board is almost comfortable. The saddle offers a good seat with a well-thought-out shape and is less hard than it might have suggested.

The driving position is almost natural, especially for a sportswoman, without too much support on the wrists. It is also possible to adjust the driving position at several levels: 4 positions for the footrests, 2 for the saddle height, height of the handles adjustable, trim adjustable via an eccentric axis on the rear shock absorber…

Saddle and trim set to the highest, the RC8R on the other hand is relatively high. The 1m80 pilot will hardly be able to put his feet on the ground, even if it is possible to gain a few centimeters by adjustments on the rear loop of the frame. 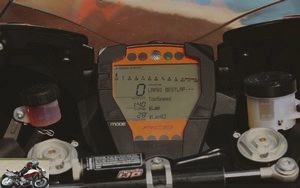 By actuating the switch, the huge instrument panel lights up and displays all its information in digital form, multiple, varied and complete even for the track (too much?): Speed, engine speed, shift light (flashing, then fixed) , temperature and a special "chrono" frame counting the number of laps made, the best time, the last time, the maximum speed.
A button on the handlebars allows you to change the menu and another allows you to start the stopwatch at each lap.

Starter…. the RC8R gives off its enormous twin-cylinder loudly; a hoarse sound fills the space. In the towers, the sound is reinforced and emits an angry sound without being too powerful..

If the box of the RC8R has been revised, it lacks flexibility and has some false dead spots. The dead point itself is not always easy to find. 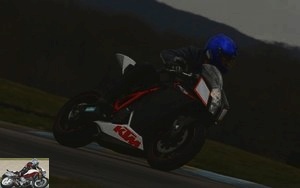 The first turns of the wheel are "easy". The RC8 can be driven by being almost smooth even on the first reports. If the 170Cv are present, they are still easy to dose.

The V-twin boosts force up to 5,000 rpm. From 5,000 to 8,000 rpm, the pilot hangs on. Above and up to 11,000 rpm, the engine pushes so hard that it gives the impression of driving a superbike machine … overwhelming! And yet, the RC8 behaves with the finger and the eye, diving naturally and directing with the gaze. It comes out of bends just as easily, without straying from the lane, even on tough hits. The rigidity of the chrome-mobylaine tubular trellis frame is impeccable here and contributes to offering a precise and manoeuvrable machine..

Despite the steering damper, the RC8R shows slight guidance on strong acceleration. 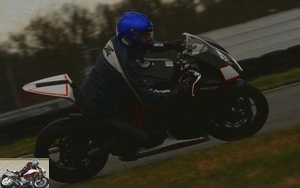 With its 320mm discs fitted with Brembo four-piston radial calipers, the front brake offers bite and power, plus a feel for easy dosing. Everything is reassuring in the dry as in the wet.

The rear brake, despite its small size of 220 mm and its fixed two-piston caliper, is not very progressive and tends to block the rear wheel very easily. The RC8R’s enormous engine brake further contributes to that quick rear locking of the rear wheel. 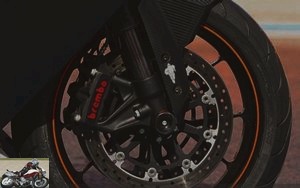 Standard fitted with Pirelli Supercorsa (almost slick), the RC8R is formidable on dry ground, really sticking to the track.
Counterpart for these Supercorsa, the behavior on wet ground is catastrophic: the rear tire slips at the slightest rotation of the right handle when exiting a curve, not enough to reassure the pilot and dare to take an angle..

The machines for the “Track ‘N’ Test” days are fitted with Michelin 2CT. These tires, which are more mixed, were much more reassuring in the test conditions (alternating rain / hail / snow / sun).

A summary table of the settings available under the saddle, indicates the different suspension adjustment points for different profiles: comfort, road, track, duo.

This table greatly facilitates the settings, especially for the pilot, who will not waste time testing all the possible combinations. All this allows the machine to be adapted both on the road and above all on the track to all possible configurations in order to extract the best settings.. 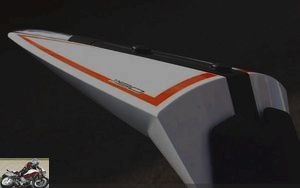 The RC8R is for a machine of this category almost comfortable, thanks in particular to very efficient White Power suspensions. The bike is also less demanding than it seems and much easier than its competitor Ducati. The machine can be guided without surprise and does not require special attention. Even the position is almost natural and results in less fatigue.
In town the RC8 will surely prove to be more demanding and tiring because the machine requires to play the clutch under 3000 revs and is unable to drive in the last gear below 70 km / h (or even 80 km / h). 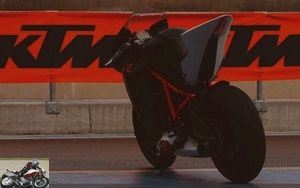 The passenger seat could have been an option, but it is not.
The RC8, on the other hand, does without a seat cowl and places the passenger seat directly on the rear shell, instead of the 2 visible plugs, which can be removed by operating a small lever housed under the driver’s seat..

The RC8R is clearly a trail bike, disdaining all practicality. No location can accommodate the slightest anti-theft device. The rider seat is impractical to open (the key hinders opening). The side stand is not very intuitive and requires attention before being unfolded. 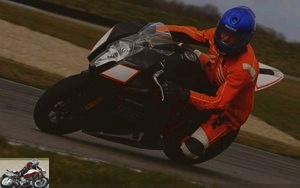 Efficient, and even almost comfortable with a driving position that is not too radical, the RC8R is an exceptional superbike accessible to – almost – everyone…. because of its ease of handling compared to its possibilities and the necessary budget. Because if the services are more than up to the price, it will still cost 20,590 euros to afford one of the 27 machines in concession. Above all, it will be necessary to accept to ride on an open road with a bridle castrating the 170 original cannons. And for those tempted by (illegal) unlocking, they will have to be attentive to exploit the 12.3Nm of torque and the 170 horses … impossible to exploit on the open road. For the track, KTM offers an additional racing kit for some 3,000 euros in addition. On the other hand, there is also the possibility for the less fortunate rider to fall back on a "simple" RC8 for 4,000 euros less..