Like all species, the Monster 1100 evolves and keeps only the best in the irresistible race of evolution that began in 1993 with its appearance. The new 1100 Evo is no exception to the rule and is adorned with an ABS as an anti-slip system to contain the unprecedented power of its twin in L. The two-valve crosses the symbolic and exciting milestone of 100 hp. 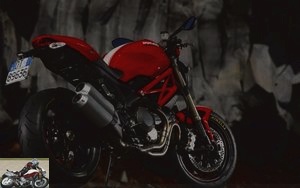 Like a lava flow, the horde of red motorcycles hurtle down the slopes of the foothills of Mount Etna. It is in this setting where nature constantly reminds man of its superiority that Ducati presented “the ultimate evolution of the Monster 1100” as Pablo Quattrino, product manager of the Bologna firm likes to say. It is indeed the first machine of the brand to cross the 100 horsepower mark in the L-twin family, fed by two valves per cylinder and cooled by air. An ancestral architecture that was believed to be doomed to extinction, given the very restrictive anti-pollution standards. It was without counting on the pugnacity of the engineers "house".

However, by the way, the performance of the 1100 is nothing exceptional with regard to the displacement power ratio developed in the 696 (80 hp) which still cubs 400 cm 3 less. It seems that the 1100 still has some reservations under its belt. 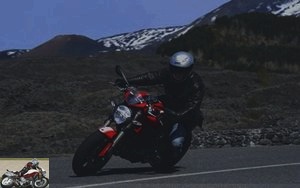 For the time being, and with its 100 horsepower, the machine seems perfectly suited to the French market where an 1100 can be exchanged for "full" against € 11.690, provided it is part of the list of 700 customers for as many units planned. in production for France. A good budget which places the clientele in a range of 35/40 years, the heart of target of this new motorcycle. These quadras in the making, often fathers of families, will no doubt be interested in the new electronic crutches supposed to contain the power of the new twin. For the occasion, this popular variation of high-cost technology (for anti-skating) has been called the “safety-pack”. It includes an ABS for braking, an anti-skid system whose finesse can be chosen from four positions as well as another technology tumbled from the GP paddocks: Pirelli Diablo Rosso II dual compound tires with less soft tread that the ends. 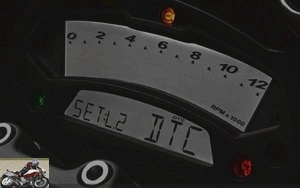 Engine underway, the new 1100 Evo has no content so far. The sound of the double silencer called Cannon style is enticing to say the least and immediately refers to the consequent displacement of the beast. The twin slams with a low rumble into the 45mm tubes. A real volcano ready to wake up.

On the saddle stitched with red, the pilot then seeks his place. The cushion is hardly higher perched than on a 796, 810 mm against 800 mm, and bombs the gap with a very accessible 696 perched at 770 mm. To compensate for the rise, the handlebars have been raised by 20 mm. But the position remains tilted forward, the pilot engaged towards the road and the front axle. The controls that fall under the hands are adjusted as on a sports car.

Clutch or front brake, we adjust the levers to the millimeter. And the time to travel on the connecting road which winds between manhole covers and coating rinsed by the rain and the sun, we quickly find our position on this new machine, which is just waiting to rumble.. 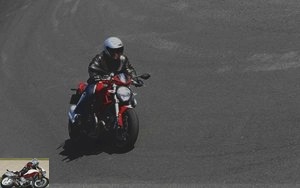 What immediately shocks is the comfort of this Monster that we were not used to being. The 43 mm diameter Marzocchi fork and the Sachs rear shock contribute to this flexibility which allows you to absorb holes and bumps without tiring the rider. Ready to climb Etna at last. The road is gray, clear with regard to the anthracite slopes which culminate at 1,800 m. The Black version with a matte band would have been tone on tone in this lunar setting. Ducati red lends itself better to contrast and finally decides to let go of the horses. Flexible after 4,000 rpm, usable on intermediates after 3,000 rpm, the maximum torque of 105 Nm arrives gradually as we approach the maximum set at 5.750 rpm. Thus mapped, the twin seems to like the draw, the passages between 6,000 and 8,000 rpm to take advantage of the typical sound, and finally give up control when approaching a bend. Because if it is soft and progressive, the 1100 Evo does not forget to be efficient and propels the whole at very high speeds without appearing to be so.. 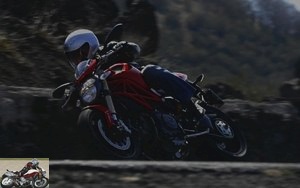 Between two switchbacks, 160/180 km / h are commonplace. In a gut of bends, you hesitate between the second and the third. Perhaps too discreet in this exercise, the torque perched at almost 6,000 rpm lets us prefer the second. It is quite new to use this report on a twin of this displacement rather than the third stage of the box, but it is more efficient to restart the machine. Ducati will slip us that a pinion of 14 out of the box will reveal the true face of this Monster which had, once again, to sacrifice to drastic anti-pollution standards to continue to exist on the market..

In the meantime, the Monster is forgotten in its smooth operation. The very soft box allows you to take full advantage of the desired range of use. Between 6,000 and 8,000 rpm from heavy braking on restart. Always comfortable therefore, the cycle part is stopped by radially fixing calipers whose efficiency is above all suspicion. Power, attack and progressiveness are part of the game. We almost forget that the whole is equipped with ABS. 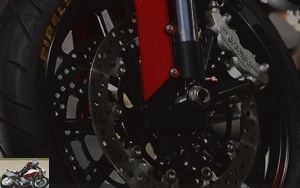 A little ash deposited by the aerodynamics of the Norman cabinet of a tourist coach and the anti-blocking system catches up with a drift of the machine. Confidence returned and throttle in full force, the DTC is responsible for sweeping the last grains of ash carried a little further by the traffic, and prevents the rear wheel from slipping by derailing the engine. We will end up provoking the phenomenon, just to find its limits. Not easy.

The more athletic can choose to modify the DTC by changing it from position 4 to 1, the least interventionist, or disconnect it completely. Like ABS for that matter. Everyone will benefit from a motorcycle that is easy to take, quite instinctive in the sequences. And which does not require any particular commitment from the pilot to be entered on a curve. 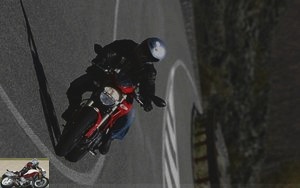 To stay in the logic of assisted sport, Ducati has chosen to equip its Monster 1100 Evo with Pirelli Diablo Rosso II. A bigomme whose edges of the carcass are loaded with softer rubber than on the tread. After the electronic crutches, it is the equipment that directly places the pilot in safety without compromising his pleasure of attacking. Positioning very far from the machine that appeared 18 years ago and of which 246,483 units have been purchased since March 1993. 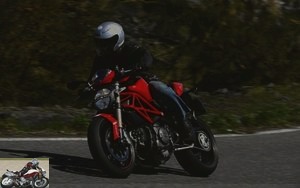 If at the time, the engine performance tended to come out of a too modest framework, and this participated in the hairy charm of the Monster, today, the chassis as the chassis largely dominate the ardor of a more powerful engine. but also more exploitable. It is because the Monster has progressed on many points since its genesis. It now has a real rear brake, a long time a pitfall for the brand, which contributes to the serenity of the pilot who can at leisure close an overly optimistic trajectory by using the 245 mm element clamped by two pistons. On this point, the silencers could give rise to fear, as on the Streetfighter, that the metal protuberances did not interfere with the pilot’s heel, forcing him to place the foot at an angle. If the discomfort exists when the sole of the foot is resting on the footrest, it evaporates as soon as the pedal is used and the foot advances on the controls.. 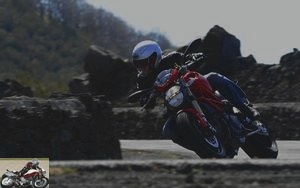 Handles and it steers

If during this test the machines were adorned with a shell referring to the exclusive use of the Monster, it is nevertheless possible to accommodate a second passenger on the saddle. Once the single-seater shell has been removed, handles profiled in the lines of the rear loop are attached to either side of the machine to secure the passenger. 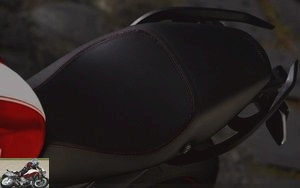 This will be the only practical element to note as the space under the saddle is inexistent. On the other hand, like its little sisters, the 1100 Evo allows completely acceptable U-turns without pinching your hands against the tank. She points. 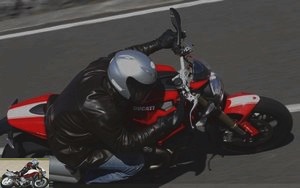 With this evolution and the 100 horsepower bar passed, Ducati is polishing the face of a flagship model that appeared just 18 years ago. Now brutality has been replaced with the contained power of a motorcycle that has never been so usable and efficient. And who forgives, thanks to its electronic crutches, many errors of appreciation, moments of inattention or simply the vagaries of the road. Without losing any of its sex appeal, the machine is now in the running to compete with the very serious BMWs, effective in daily transporting quadra wishing to move on two wheels without putting either their life or their timing in danger. With the new Monster, it is now possible to do the same by sending a much more sporty image of himself. A real business card.