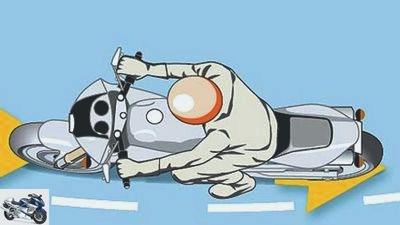 About centrifugal forces, three phases of a curve and the Kamm’s circle
Basics: lateral and circumferential forces when riding a motorcycle

Wherever great forces are at work, it has to keep the bike in line: a tire should implement decelerations and accelerations, and also defy centrifugal force. But which forces are involved and how does it work? Here are the answers. 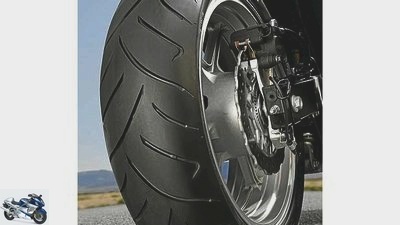 The magical one “Grip” only comes into play at the very end of this story. First, we take care of the forces that the two tires, as the only connections between the motorcycle and the road, have to withstand: When the driver accelerates, the engine picks up speed and pulls the chain on the rear wheel, the tire transfers a force to the tire via its contact patch Street that acts in the direction of its perimeter – hence the name Circumferential force – and the motorcycle accelerates.

And why should these automatisms even interest the driver? Quite simply: He is responsible for ensuring that the forces do not overwhelm the tire. Overstrained tires spin or slip – with sometimes ugly consequences. 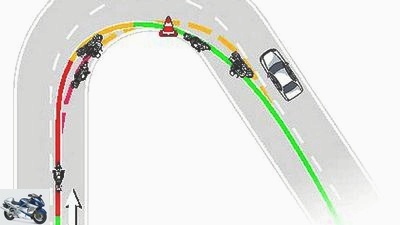 When braking on straight route (A) the circumferential forces are high, the cornering forces zero. When entering the Curve (B) the lateral forces grow; the driver keeps the rear wheel slightly under tension.

From the apex of the driven line, the driver straightens the motorcycle up again and accelerates (C): The lateral forces decrease, the circumferential forces increase.

Braking and turning:
Most motorcyclists use the front brake to slow down; accordingly, circumferential forces act primarily on the front tire before a curve. From the moment you turn in, centrifugal and cornering forces occur. 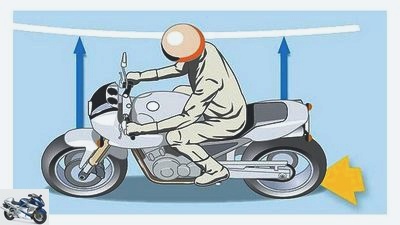 Cornering: In an inclined position, the lateral forces that keep the motorcycle on track predominate. Slight acceleration stabilizes the motorcycle, and low circumferential forces then act on the rear wheel. 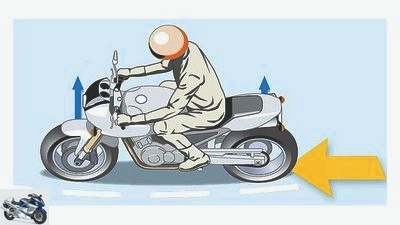 Stand up and accelerate.

Righting up and accelerating: At the exit of the curve, the radius driven and consequently the cornering force decrease. The motorcycle accelerates; circumferential forces act on the rear wheel.

The area that a normal motorcycle rear tire has available to implement all the circumferential and lateral forces is hardly larger than the back of a hand, and not even half the size of a postcard. Surface wear, incorrect air pressure, moisture and traces of oil make this task unnecessarily difficult.

So: check regularly to see how the rubber is doing. He will thank you with reliable power transmission. 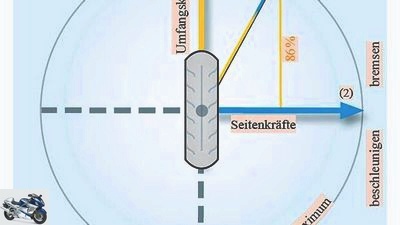 No tire story without the Kamm circle: It describes the grip limit of a tire as a function of the forces acting. If a power arrow ends within the circle, there is liability; outside the tire slips away.

If a motorcycle is decelerated or accelerated in the absolute limit range, the tires must call up all circumferential forces. Every degree of inclination would now provoke a slide (1). Also the other way around: In a maximum lean angle, a braking or acceleration maneuver would allow the tire to be lubricated (2).

The area in between is more interesting: If a tire requires 50 percent of its possible lateral forces, it can also transfer 86 percent of its possible circumferential forces at the same time (3). The size of the circle, i.e. the total force a tire can transmit, is determined by external factors – primarily the coefficient of friction between the rubber and the road surface: on cobblestones it is only about half as high as on normal country road asphalt, on ice it is less than a tenth from that.

Wetness, dirt, leaves, lane markings and combinations thereof make the circle smaller and require the driver to be more careful. So that the tire is not overwhelmed.