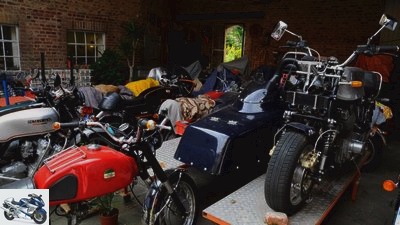 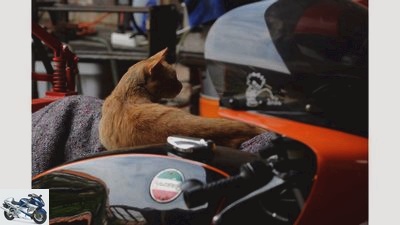 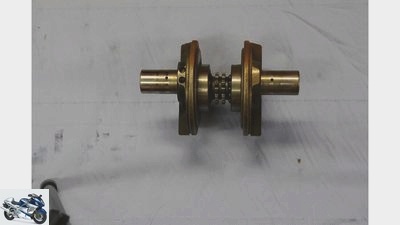 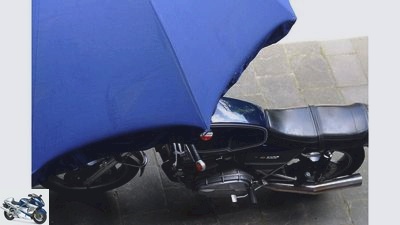 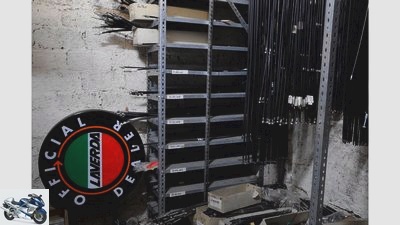 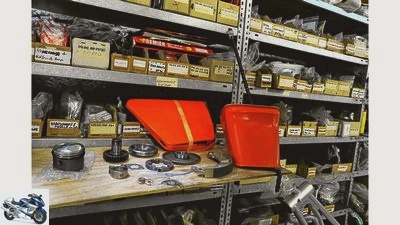 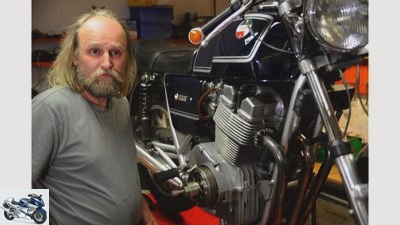 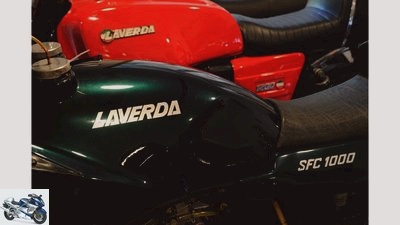 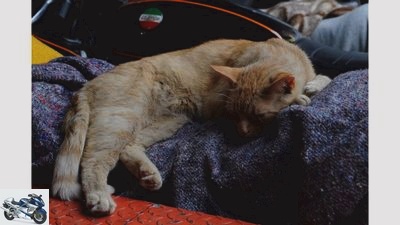 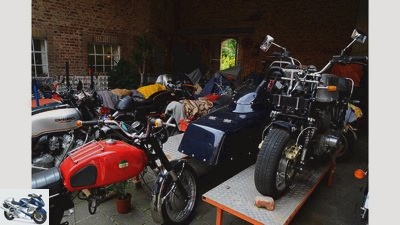 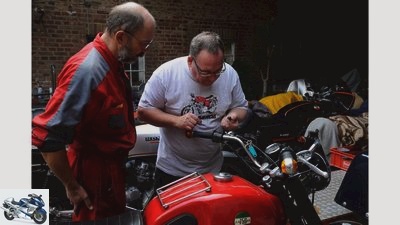 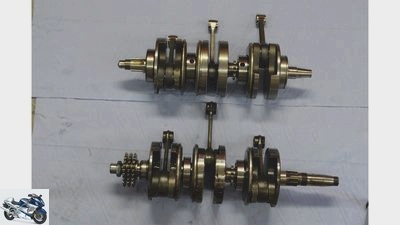 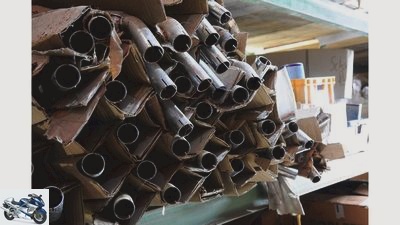 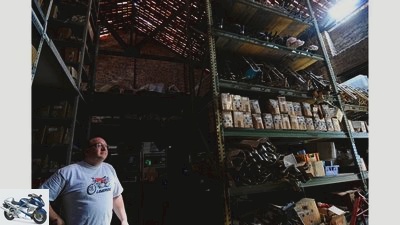 13/24
A picturesque homestead in the Voreifel houses everything that friends of a very special traditional brand desire: the great workshop in the stables, the huge spare parts store in the barn. 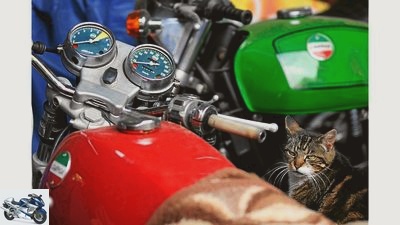 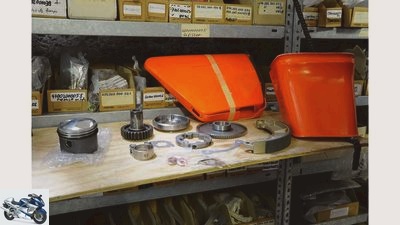 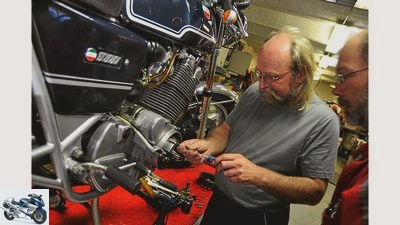 16/24
… This is another reason why Piet Herrmann has very good career prospects. 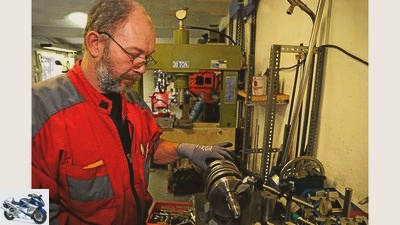 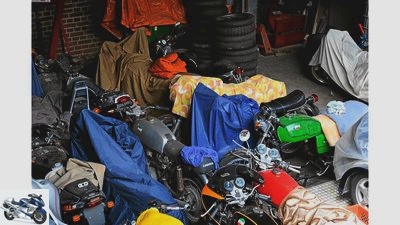 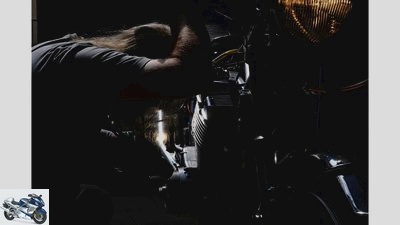 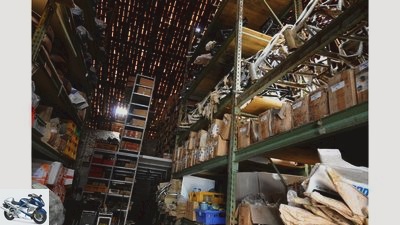 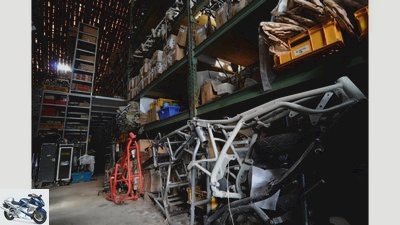 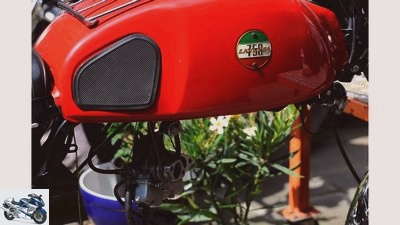 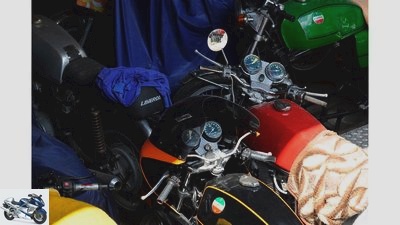 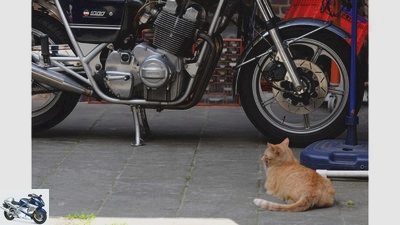 A picturesque homestead in the Voreifel houses everything that friends of a very special traditional brand desire: the great workshop in the stables, the huge spare parts store in the barn. The brand name? Laverda, it was clear.

The second use of former farms is usually taken over by well-paid townspeople who need space for their wife’s stallion and their own wine cellar.

This waste must be stopped, because an ancient square farmstead in Dom-Esch, a nice hamlet in the haze of the easternmost Eifel heights, illustrates what a worthy continued existence of such walls should look like: under the protruding canopy of the old tobacco barn, a colorful gathers Laverda stoves from 1000s, 750s, 1200s awaiting repair or restoration. Behind the covered courtyard entrance is the well-equipped workshop on the left, in front of which a three-cylinder barks warmly for the test drive. Opposite the table and chairs invite you to linger. The boys are busy right now, but coffee is ready.

A customer christened this farm Mototop, and in fact, even paying larger bills in such an atmosphere strengthens the connection between man and machine. An exemplary model not only for Laverda, which, as is well known, sprang from a side branch of the agricultural machinery manufacturer of the same name from Breganze, which was driven out in 1949.

Dirk Schreiber hurries over from the office – it is on the ground floor of the residential wing facing the street – to the barn. He is the businessman here and is also responsible for ordering spare parts. It is extremely reassuring that the silencers, frames and mudguards are stacked in their high shelves up to almost seven meters high. Small parts are stored in the rooms above the workshop – Dirk calls the spare parts situation for all two and three-cylinders comparatively relaxed.

Roger Viehl, the farmer on the farm, so to speak, and Laverdista for over 30 years, deserves special praise for this. The master car mechanic had promised himself and some friends at the end of the 1990s that he would send the strong Italian women out on the streets for as long as possible.

In February 2000 he gave this promise a framework and founded the Orange Cycle Team. He had acquired his craftsmanship in the workshop of Moto Witt in Cologne, a German Laverda importer for a long time. A small part of the hoarded spare parts also come from there, as well as from other dealers. The majority, however, came directly from Laverda in 2002 because the company’s inventory was lying around in the way after the takeover by Aprilia.

Roger wanted to take care of all two and three-cylinder cylinders, which at the time meant that he also had to deal with new vehicles: After the bankruptcy at the end of the 1980s, the brand rights were sold, and from 1995 the 650s appeared on the well-known 500s -Twin from 1977 superstructures. Later the cubic capacity increased to 750 cm³, instead of air cooling there was water cooling, 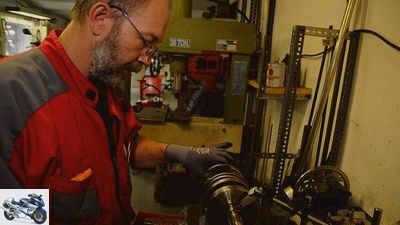 Roger Viehl checks the concentricity of a three-cylinder crankshaft. A look at his parked yard reveals: He’s not doing this for the last time.

2002 was the end of the day. The scene names these late-borns after their Venetian place of production, and normally nobody lumps Zane-Laverda together with the classic Breganze models. Which really upsets the OCT guys, because they like these highly bred and not particularly gentle twins, all of whom look quite sporty and thanks to their excellent chassis they correspond to this impression.

Perhaps their affection also stems from the fact that the Zane-Laverda are part of the normal business at OCT. In Dom-Esch a lot has been improved and worked out to make the engines stable, meanwhile there is no other specialist far beyond Germany. Roger estimates the proportion of Zane models to be almost a third of the approximately 4,000 Laverda in Germany. After all.

Lovers don’t have to be contaminated with Italy

Which of course still means that the Breganze three-cylinder as well as twins with 750 cc and less displacement – in that order – make up the majority of the OCT business. The half-liter four-valve engine and the 600cc Enduro are far from being classics, the large models have been known for ages. The 750 cc, built until 1977 and the three-cylinder produced from 1973 to 1987, thanks to their robust and hearty nature, even conquer enthusiasts who do not necessarily have to be considered irradiated from Italy.

People like Peter Herrmann, for example, whom everyone calls Piet and who has just returned from a test drive in the 1000 series. The precision mechanic and mechanical engineer has already tried his hand at American cars, and like most Ami sleds, he holds any old one Laverda basically repairable forever. “Unless you drive them through the wall.” 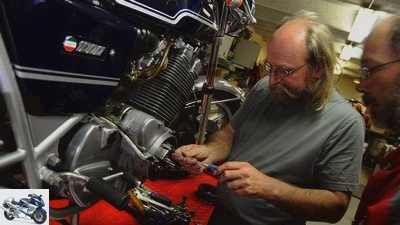 In the meantime – often on behalf of OCT – spare parts for the Laverda classics are being produced. This is another reason why Piet Herrmann has very good career prospects.

Without glorifying the technical virtues of Massimo Laverda’s works, he believes in their healthy substance and could list a number of customer motorcycles, two- and three-cylinder, with more than 100,000 kilometers on the clock. Most of them have enjoyed a single owner for a long time, most of them are used for sports and tourism.

That doesn’t change the fact that, of all things, a rather radical piece of sports equipment delights the community the most: the SFC was created in a total of 500 copies to announce sporting successes in the long-distance races, which were extremely popular at the time. This 750 series appeared for the first time in 1971 at the 24-hour race in Oss, Holland. She won. At the request of the Dutch importer, so the legend goes, they were painted in the national color of their country. His wish had far-reaching consequences. Until today, until Dom-Esch.

What makes Laverda so fascinating??

Viehl: Big motorcycles were only produced in Breganze for a few years, but at least the first two model series were very remarkable: First, the 750 series with the almost British but modern twin in the frame open at the bottom. And then the 1000 series, in 1972 the first real superbike alongside Kawasaki’s Z1, but with a three-cylinder. Both models still stand out, and they’re pretty rare. And finally, in terms of their basic substance, they are definitely one of the more robust youngtimers.

Viehl: No, no, Massimo Laverda has definitely not borrowed anything. But he was already into solid constructions and as a small manufacturer could only insist if his team designed carefully and delivered quality. He did it, you can really say without exaggeration that a well-adjusted and well-maintained three-cylinder usually covers 150,000 kilometers, the 750 not much less. Of course, care also includes changing both the timing chain and the primary chain every 25,000 kilometers. Or remember that Laverda stipulates at the RGS, for example, that the pistons should be changed every 65,000 kilometers because the upper ring groove has then usually widened.

Are there typical weak points?

Viehl: Until the introduction of the BTZ ignition in 1977/1978, it was definitely the alternator with its meager 100 to 120 watts. There is room for a larger Lima if you convert to a modern electronic ignition, but we recommend that anyway. Above all, the 1000s then developed noticeably more running smoothness. And then the 750 is no longer in danger of dying from heat due to a burned-out breaker and a weakened ignition adjuster. But so that we don’t get it wrong: Basically, the electrics of the 750 series are among the best there was at the time. The three-cylinder is less of a concern in this regard than many other Italians. Mechanically it looks very good, and the transmission and clutch also cause very few problems. When drilling with the 120-degree crankshaft, however, you should know that it creates enormous pressure on the crankshaft bearings, which can then press into their bearing seats.

What else does a buyer have to pay attention to??

Viehl: The motorcycles in both model series are quite old, so a lot depends on the care taken by the previous owner. The 750er, for example, reacts offended to constantly excessive oil change intervals. Once the mud has covered the oil baffles, the connecting rod bearings are extremely endangered. If a motorcycle is left standing for years, oil control rings and cast iron bushings, among other things, can be damaged. And if, after adjusting the valve clearance by means of shims on the three-cylinder, the camshafts are not correctly positioned in their brackets again, it will also wreak havoc.

Viehl: Nobody has to worry when it comes to wearing parts. So far we have also repaired every motor, even if we have to resort to more and more used parts for the housings. The three-cylinder cylinder heads are also becoming rare. It looks even better with the 750. We now get some body parts as reproductions, but some do not meet our quality standards. If you want an original restoration, you have to spend a long time looking for turn signals for 1000 SFC or RGS, for example. Or pay a lot. It is the same with some small parts of the 750 series. You can hardly get the Bosch light switch from the early models. But I still find the overall situation very reassuring compared to some Japanese motorcycles in particular.

What role do the models with the small four-valve engine play?

Viehl: The 500 and the resulting 600 enduro are exotic for us. The engine is very interesting and also solid, but it never developed the flair like the bigger twins. Nevertheless, the sporty special models such as the 500 SFC are gradually gaining collector status. Of course, the little ones are all fun. Anyone who accesses here, however, must know that the spare parts prices are already at the level of the 750s.

And what about the Zane-Laverda?

Viehl: Could be, they’ll become cult. Or they never will. We like them because they have a clean chassis and – appropriately improved – push their engines properly. We also came up with a few ideas to make these machines more durable. Now they’re an integral part of our business, it’s simple.

How are the prices for the Breganze models developing??

Viehl: The most coveted Laverda will probably always be called the 750 SFC, because of its sporting history and the low number of units. 549 originals have been built, making it clear that they are now being traded at prices that are similar to those of a Ducati 750 SS – good specimens from 25,000 euros. As is well known, there are many replicas. They cost between 10,000 and 12,000, but you should be very careful because only a few of these replicas justify such a price. A driving-ready 750 SF can be found for 3,000 to 5,000 euros, a nice one costs around 7,500. However, it should be noted that engine overhauls – regardless of whether it is a two- or three-cylinder – can quickly devour 3,000 or even 5,000 euros. With the 1000 SFC you get a reasonable restoration basis for 6000 euros, it gets good from 10 000. The RGS is cheaper, the well-preserved early 1000s are more expensive. And an original and very good iota can easily cost 15,000 euros. Basically and clearly the trend is towards the original condition.