The sport maxiscoot aimed at touring

Kymco, what is he saying? Kymco! The Taiwanese manufacturer discreetly arrived in France … leaving the small-displacement sector when Kawasaki decided to release its J300 based on Kymco and when BMW entrusted the manufacture of its maxi-scooters to the brand. It was at the same time that the Taiwanese began to review its offer to release 125cc with larger engines and above all to carry out more European research in terms of design. At EICMA, Kymco is turning a page in its history by unveiling the Like and especially the AK 550, naturally Euro4. Farewell to the MyRoad700 and welcome to the direct competitor of the TMax which trusts the sales of maxi-scooters in France. So, has the anvil 700 been forgotten and do we have a credible proposition against the Japanese flagship? Test drive on the small roads of Corsica. 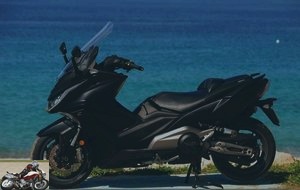 AK, that sounds like a Soviet submachine gun. But no, it’s just theTObirthday Kymco, 50 years of the scooter manufacturer and the arrival of the new CEO, grandson of the creator because Kymco remains a family business. 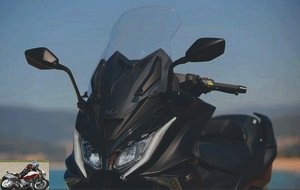 Indeed, the AK breaks with the traditional lines of the brand and borrows largely from the lines of sports maxi-scooters. Kymco nevertheless presents the AK as a touring model. But if we take the benchmark of touring maxi-scooters – the Burgman – and the sport benchmark – the TMax – the lineage in terms of lines is unambiguous: sporty. The front is signed Kymco but with sharp lines in the line of the maxi-scooter sporti, which are distinguished by the two facial mandibles underlined by the LED light signature..

We then have a classic architecture with a large central beam and an aluminum frame to end with a specific light signature, with LEDs, as at the front. The finish is up sharply, including in details such as the transponder now equipping the two-wheeler. There is no longer any need for a key to start it or even open the saddle. 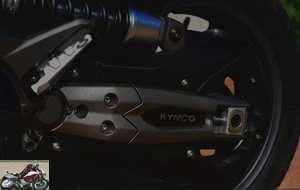 550 cm3 is more than 530 cm3! It seems to be the obvious, but the displacement indicates the competition. And it also makes it possible to offer more power and torque than the competition, with nearly 8 horsepower better announced, but almost 1,000 rpm higher and 2 Nm of additional torque. With a length and a wheelbase close to the competition, we are almost on the same dimensions, until the use of the belt for the transmission. Only the weight which takes here nearly 30 kilos (242 kg all full facts against 213) marks a difference. On the other hand, we appreciate the original heated grips, the adjustable seat backrest or the tire pressure indicator.. 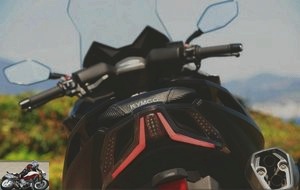 Maxi-scooters are getting higher and higher. If the X-ADV tested last culminates, the AK 550 is not left with its 795 mm of saddle height. Suddenly, the driver of 1.70 will have just the tip of the feet on the ground. However, the scooter is well balanced and allows easy U-turns, while managing to maneuver noticeably with the feet. 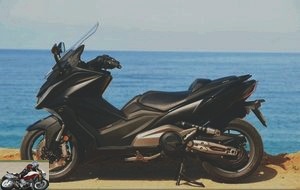 The position has nothing to do with the old models where the knees went up in the chin. Finally, we find a natural ergonomics where the hands rest well on the handlebars and where the knees are relaxed. We are waiting for the comparative test but we find ourselves in familiar territory.

Under the handlebars, there are two small, handy glove boxes with USB charging. In front of us, we have above all a fully digital dashboard, from the tachometer on the left to the counter on the right, duplicated in the center with the Noodoe system. The information is plentiful and comprehensive. 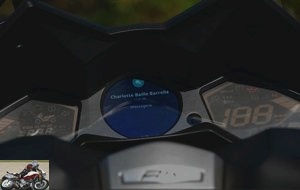 On our pre-production models, on the other hand, the display was difficult to read under the sun; in question a cell which makes it possible to adapt the luminosity of the meter according to the day and the night. The previous series was too bright at night. There, it is no longer enough for the day. As this is only an electronic setting, Kymco assures that this should be set for the first deliveries in May..

Crutch folded, the scooter snorts in a slightly hoarse sound and significantly improved in the Akrapovic version. 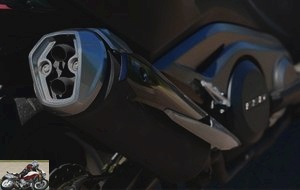 No more unnecessary revving of old Kymco models that screamed but did not advance, with this lapse of time between revving and real advance. The right grip finally reacts immediately to the request of the gas grip, without roaring but with efficiency. Suddenly, the sensitivity to the throttle is dynamic in standard mode and could almost make you prefer rain mode, the smoothness of which on acceleration is more pleasant in urban mode..

The dynamic is there. Nervousness too. Red light departures are immediate and drop off all categories of scooters. The engine is dynamic and even makes the twin-cylinder feel in terms of roughness. Slender, we slip easily between the lines. The mirrors mounted on the front fairing provide a good view. The braking is in keeping, offering rather a good feeling and an immediate and effective reactivity, at the height of the inclinations of the machine. If you had started in rain mode, you will then be happy to switch to normal mode. You just have to stop or be at very low speed to switch from one mode to the other. U-turns are easy and worry-free, although the AK requires a little more effort than its competitor on very low-speed maneuvers, making you feel the almost 30 kilos of difference.. 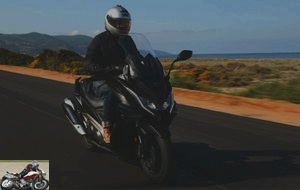 The AK sets off dynamically and quickly on the motorway, quickly accepting totally illegal speeds on our French network. It seems that it even tickles the 170 km / h on the circuit. It then accepts long curves at maximum speed without flinching, even if it remains sensitive to pressure on the handlebars. With a relatively high bubble, we appreciate the protection provided, which does not cause any eddies or noise in the helmet.. 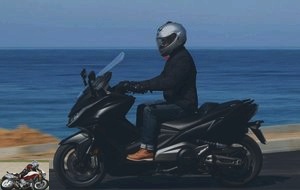 The AK naturally finds small roads, with clear climbs and clear reactions to the throttle. As much as the steering is sensitive on the motorway, it becomes a strong point on small roads, making it possible to rectify a trajectory which closes a little faster than expected. The reminders are dynamic and allow to chain particularly quickly the virolos which follow one another. There is nothing to complain about except a feeling of weight may be superior to the competition. It is also a little more brutal on the go-around and therefore a little less fun. In fact, while its direct competitor disconnects the neurons almost immediately, we remain reasoned and reasonable on the handlebars of the AK with a more thoughtful driving and on a daily basis, it is much better for the license. 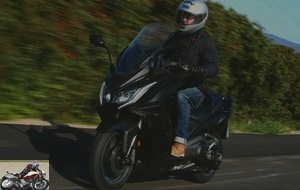 Double Brembo disc at the front, single disc at the rear but of 260 mm, the AK brakes well, hard and well, offering a good feeling and all the necessary power.. 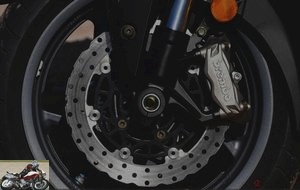 The saddle is quite comfortable at first glance. Behavior is healthy regardless of the condition of the road. But after the test, the buttocks showed the limits of comfort. The AK reinforces its sporty character here more than touring and is much closer to a TMax than a Burgman in terms of comfort.. 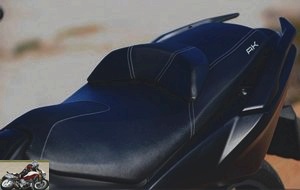 The chest appears large. In fact, we only place an integral and reversed. However, there is still room for a handbag and a rain jacket or a jacket.. 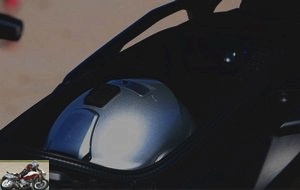 The on-board computer indicated an average consumption of 4.4 liters per hundred during the test, at a leisurely pace. Consumption exceeds 5 liters when you shoot it. What is needed is not to be disturbed by the 7 liters advertised in instantaneous consumption at times. With a generous 12.5 liter tank, we can therefore count on a maximum possible autonomy close to 300 kilometers at a leisurely pace, which the two-wheeler can also do.. 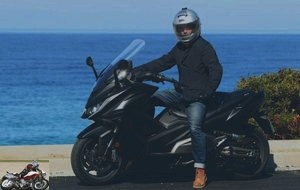 Forget everything you’ve ever thought of or experienced with a Kymco. AK has nothing to do with anything the brand has produced so far. With this maxiscooter, the brand arrives with real arguments on the market and arguments that are not just price. The AK is powerful, homogeneous, well finished and up to what you would expect from a sports maxiscooter, especially at this price of 9,890 euros, or 1,700 euros less than the competition, which positions it. clearly as the cheapest in the category. The icing on the scooter, there is also an A2 license version, the switch from one mode to another is free (except for labor).