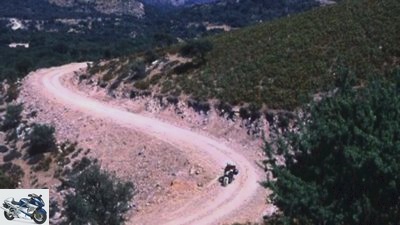 Enough of the gray sky and moderate temperatures ?? Josef Seitz didn’t want to wait any longer for spring. He spontaneously fled to the Greek island of Lesbos to feel the sun on his neck a little earlier.

Stop, restricted area! ?? The young soldier’s gestures are clear. When I speak to him, he excitedly turns the crank of his field phone and throws it on the floor with enthusiasm. His superior, who arrives shortly afterwards, seems to have the better nerve, apparently doesn’t see me as a serious threat to the peace of the island, just another curious tourist. He politely, but very firmly, points out to me that this is the end of my journey in this part of Lesbos. There would be nothing to see behind the barrier, just rocks ?? It’s a shame, because I wanted to see exactly those stone formations up close.

I am forced to retreat and drive to Mandamados. From there further north and finally turn left after Klio onto a gravel road, which is criss-crossed by deep water grooves. The fork knocks through a few times, and a herd of free-running horses rushes away in alarm. Seven kilometers later I am standing under the top of the Vigla ?? at 968 meters the highest peak in the Lepetimnos Mountains. The view is fantastic: In the north I can see the Turkish coast on the horizon, in the east wooded hills sway down to the sea, and in the south the Gulf of Kalloni shines in the sun. Snow, rain and cold in my Bavarian homeland? Long forgotten. Already in spring, the temperatures on Lesvos are almost summery. Simply ideal to bring the start of the season a little forward. It’s just astonishing that apart from me, no other motorcyclist seems to have come up with this idea. 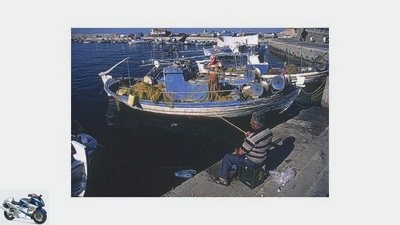 It drives me a little further north, to Skala Sikamineas. A little nest that has long been dedicated to tourism. Nevertheless, Skala Sikamineas can still be called a fishing village with a clear conscience. In the harbor the boats rock like colored nutshells on the waves, on the quay the fishermen sit in the shade and prepare the fishing lines, which are each two kilometers long and hooked every few meters. Right next door is a restaurant. Freshly caught squids are dangling on the line to dry, and one of them is grilled and ends up in my stomach. 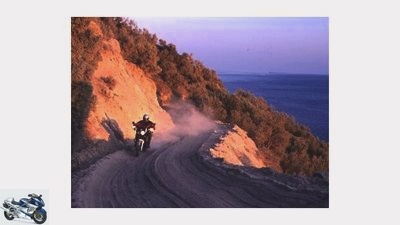 I’m on my way west. On a road that winds through the landscape as if it were an eel, I turn to Mithimna, which is simply the tourist destination on Lesvos because of its location: the old village is impressively situated on the slope, overlooked by a mighty castle, a legacy the Genoese from the 14th century. The perfect postcard motif.

Between the foothills of the Lepetimnos Mountains and the Skoutaros Hills, I get to Kalloni, but shortly before the city I turn to Limonos Monastery, the largest on Lesbos, where one of the most important libraries in Greek church history is kept. A man’s world: women are still not allowed into the main church or the square in front of it. And the Orthodox monks are plagued by worldly worries? Maintaining the imposing complex is becoming increasingly difficult due to a lack of money. 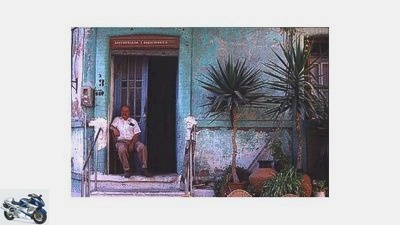 The next day we go out to the beach at ancient Andissa, to the tavern of Dimitrio Kotsini, who once worked in Germany and is now happy to be able to dig out the language skills he acquired back then. His tavern is always well stocked and is also a popular address among the locals. Sirtaki can be heard from the speakers? Greek music that is able to express the joy of life, but also sorrow and sadness at the same time.

An older man gets up, moves a few chairs aside, and begins to dance as if he were Alexis Sorbas. People spontaneously clap along at the next table. After the song, life resumes its normal course. A scene like opening a door through which I can take a look into the Greek soul.

The Greek islands are a truly worthwhile destination when it comes to feeling the summer already in spring. The only problem: the long journey.

getting there
The easiest way to get to Greece is by ferry from Venice, Trieste or Ancona with the destination port of Patras. From there it is around 200 kilometers to the port of Piraeus, from where the ferries to the Aegean islands leave. Alternatively, there is the possibility of taking the ferry from Italy to Igoumenitsa in northern Greece and going over the Karerpass to Thessaloniki, where ferries also operate to Lesbos. Tickets are available directly at the port. However, there may be bottlenecks during the main season. Departure times and reservations for the ferry connections within Greece can be found at: www.gtp.gr/RoutesForm.asp. Information and timetables about almost all European ferry connections can be found at www.ocean24.com.

Travel time
Motorcyclists who are tired of winter can expect pleasant temperatures on Lesvos from the end of March. In midsummer it gets very hot; September and October are better for driving again. The winter months are often wet and cold.

accommodation
On Lesbos, there is a good range of accommodation options, especially near the beaches and bathing coasts. Mostly these are apartments that are equipped with cooking facilities for self-catering. Prices vary depending on the time of year; a double room costs around 25 to 60 euros in the main season. Single rooms, on the other hand, are rarely found. There are only campsites at Mithimna and Vatera. Wild camping is officially prohibited.

Catering
In addition to lamb from the grill, gyros, souvlaki and bifteki are served everywhere. This includes a salad with sheep’s cheese and olive oil. On the coast, of course, the fish dishes taste best. The tip: the Anemaessa restaurant, which is located directly on the tiny port of Skala Sikamineas.

Enduro trails
Lesbos offers a lot of dusty slopes for knights of the tunnel. The best area to let off steam on the Enduro is in the corner of Agiasos, Plomari, Vatera. The mountainous area between Parakila and Vatoussa is also criss-crossed by a network of slopes.

literature
The travel guide of the same name published in 2003 by Michael Muller Verlag deals exclusively with the island of Lesbos for 15.90 euros. “Island divers” receive detailed information in “Greek Islands”, also from Michael Muller Verlag for 22.90 euros (www.michael-mueller-verlag.de). Especially for motorcyclists there is a volume from the Unterwegs edition by the author of this report, “Greece”, published by Motorbuch Verlag. It costs 16 euros and can be ordered at www.motorradonline.de. The card »No. 212 «from the Athens publisher Road Editions is the best there is about Lesbos. Even the smallest gravel roads can be found on a scale of 1: 70000. ISBN number: 960-8481-92-9. Freytag’s Lesbos map is easier to get hold of & Berndt, ISBN 3850845842, for 7.50 euros.