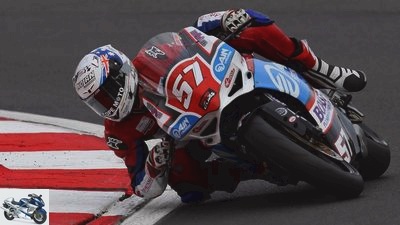 Christian Stange is not yet fit again, but Weber Motos Racing’s Supersport 600 Kawasaki is no longer orphaned. The Australian Levi Day takes over the ZX-6R and celebrates its IDM premiere.

After his scaphoid fracture in the spring, Christian Stange is back on the road without a cast, but not yet fit enough for a race distance.

Levi Day steps in for him. The 27-year-old has been touring Europe for some time and has been in the British Championship on 600cc motorcycles for the past four years. From next weekend the Kawasaki ZX-6R and the IDM Supersport 600 complete his resume. He is following in the footsteps of Damian Cudlin, Gareth Jones, Jed Metcher and, most recently, Kane Burns: They are all drivers from the other end of the world who fought for points in the IDM.

“We’ll just see how things go in Assen”, explains team manager Evren Bischoff. “Only then do we decide how to proceed.” Day finished 29th in the British Championship.