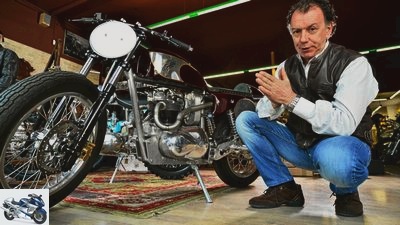 He’s causing a sensation with the friendly little Multiuso. But the Italian Umberto Borile has even more idiosyncratic self-builds in store for breaking out of everyday life.

The Persian carpets are real. And rare one-offs, just like the motorbikes that park on them. It is naked bikes, cafe racers and enduros, all with a classic look and all built by Umberto Borile, which are located here in the sales room in the small village of Vò south of Padua, casually distributed between antique glass cabinets and valuable chests of drawers. The whole thing doesn’t look like a shop at all, but rather like the living room of a motorcycle-obsessed with the cozy leather dining furniture and the many bookshelves. And that’s exactly what it is: “I’m here every day, so I want to feel good. With nice furniture, nice pictures and nice motorcycles. What does an oil stain do on the Persian? ”Says Umberto Borile with a laugh.

He calls his sales room “Bottega”, which in Italian refers to a craft business with an attached shop. That fits perfectly, because behind the shop is the well-equipped workshop, where the 61-year-old trained furniture and painting restorer and his mechanic Gianmaria forge the right framework for various single-cylinder units. And that is to be understood literally, because Borile makes frames, tanks, mudguards and numerous other individual parts by hand, ironing, milling and welding. Strictly according to his style, of course: “I’m from the old school,” he says mischievously. “A motorcycle has to be built simply, with no frills. But I am very demanding when it comes to the material, because my motorcycles should be as light as possible. ”Modern electronics are therefore in vain, but there are plenty of parts made of aluminum and Ergal.

A furore about the Multiuso 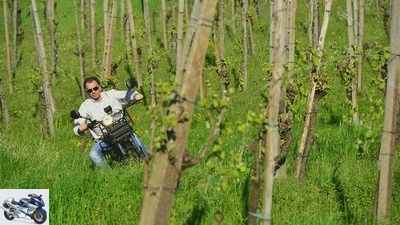 Umberto Borile with his favorite Multiuso motorcycle, which is perfect for relaxed enduro hiking.

Umberto Borile is currently experiencing a kind of hype in Italy. Lifestyle and men’s magazines report on him, students from the University of Venice recently even made a short film about his small motorcycle company – as an example of how one can defy even fat economic crises with initiative and energy. The reason for the sudden fame is the Multiuso, a smart mix of road, enduro and trial machine with 230 cm³ and 15 hp. Originally, Borile had built it just for himself, for his trips on and off the roads in his native Euganean Mountains, a small range of hills in the middle of the Po Valley. But the concept hit a nerve, and the Multiuso secretly developed into its biggest best seller. Last year 200 units found a buyer, this year it will be 500. In addition to the 230, a 125 is now also available, a model with 350 cm³ is in preparation.

The imaginative northern Italian has been designing motorcycles since 1988. To get started, the off-road rider built a competition enduro with a 400cc Husqvarna engine, followed by cafe racers and enduros, all with air-cooled single-cylinder engines. But as long as the majority of motorcyclists were only concerned with top performance, Borile’s underperforming singles looked rather bizarre and outdated and found only a few well-to-do customers, because manual labor had and has its price. Today, however, since retro and slowing down are socially acceptable, the demand is increasing. Visually and technically, all models are based on classic British motorcycles. “In our Veneto, off-road sport was widespread in the 1960s, especially with English machines that were converted into crossers and enduros,” says Borile. A Matchless G80, which he saw and heard for the first time when he was 16, became a key experience for him: “Just metal and chrome, a simple, elegant shape and this incomparable, gnarled single sound. That really got under my skin. ”Capturing and expressing such emotions is still his declared aim in his designs to this day.

Out of a deep depression 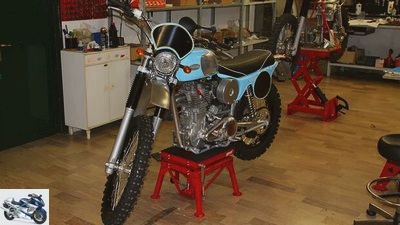 The Borile B500 Ricki: Borile’s homage to the deceased son. Limited to 20 pieces.

Due to the success of the Multiuso, he had to abandon the plan to do everything himself. “I can’t handle 500 pieces a year, after all, there are only two of us here.” That is why the Multiuso models are manufactured in a small factory near Verona and then delivered to Vò, where Borile checks them meticulously and stamps the serial number into the frame . He has little to do with the sale itself; The Bassi entrepreneurial family from Milan is taking care of that, and in 2010 they suggested working together and brought him out of a deep depression. Because in the summer of 2009 his son Riccardo was fatally injured in an accident with a rifle. “I didn’t see any meaning in my life at all,” says Borile today. “I will never get over the death of Ricki, but at least I have found my interest in motorcycles again and thus still goals in life, even if no more dreams.”

Soon he was building a retro enduro with a tubular frame made of light metal, which he named “Ricki” after his son. He used a modified 500 cm³ speedway engine from GM, which is also used in other motorcycles, such as the Cafe Racer B500 CR. Finding the right engine is not always easy, however – a topic that Borile can get excited about: “I originally wanted an Italian engine for the Multiuso. But at Minarelli in Bologna they told me that I had to buy at least 1,000 pieces and pay cash in advance. ”An impossible thing for a small business owner. That’s why he signed a contract with Zongshen in China, now gets the engines in lots of 100 and only has to pay on delivery. “They are a huge corporation, but, unlike Minarelli, they weren’t too smart for a small job.” 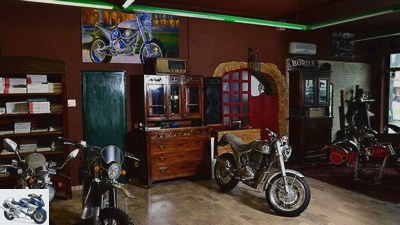 His sales room in Vò, so Borile, only houses beautiful things: antiques and motorcycles.

Borile has hardly solved this problem to his satisfaction – “The engine is extremely reliable and economical”-, the next one awaits him: the Scrambler, a replica of the Ducati of the same name from the 1960s. Their 450 single is to be built from engine parts from the Ducati Monster 1100; Borile has already completed several roadworthy prototypes. But during the development the boss changed at Ducati and with Audi even the owner, currently the delivery of the parts is stalling. As always, Borile takes on the problem without hesitation. “We have to talk again. And if that doesn’t help, I’ll come up with another solution.” As is well known, necessity makes inventive, and that Umberto Borile is not at a loss for ideas is sufficiently proven by his idiosyncratic self-made buildings.