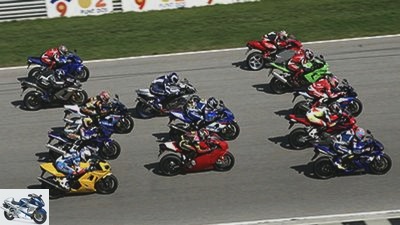 15 drivers, 13 motorcycles ?? At the annual showdown of the best sports motorcycles, this time World Championship driver Max Neukirchner was supposed to go hunting for lap times for MOTORRAD. It turned out differently.

Supplied for the masterbike 2005
Michelin all bikes with the Power Race. There are three different mixes
Medium, Medium Soft and Soft. Depending on
The tire is mixed in what is called
2CT process (Two Compound Technology), a development based on the
MotoGP sport comes from. The lap times of the Masterbike were exclusively on the
Medium Soft, a single-compound tire with just one mix of front and rear wheels. This one has on throughout
works perfectly on all bikes. It gave the drivers an optimal feeling for the limit area. Slides were very easy to control,
the guidance of the front wheel almost perfect.
The Power Race made an excellent impression, especially with the extremely strong braking maneuvers in an inclined position. In addition, it shone with its neutral, manageable steering behavior and enormous grip.

Max Neukirchner takes the reader with him on his round

At the end of the start-finish, there are around 290 km / h, hard braking, then 180 through the first left, the fastest corner there is on this circuit. Because Valencia is actually a stop-and-go course. Brutal braking on the Doohan corner (1). She is approached sharply? Highsider danger. In the following slight left bend
hold inside by the curbs. The following applies to the narrow right (2): drive in late, get up very early ?? if you can, you should then take the curve in drift. She is ideal for that. Take a lot of momentum into the long left turn that follows? Drive in late, accelerate out sharply. Otherwise there will be no momentum for the straight. the
The following links (3) are marked with approx
Drive through 160 km / h. At the end of the straight, professionals arrive at around 260 km / h and stay inside. The following sector (4) actually consists of three different ones
Radii, but is passed through in one. Because: Who here several times
erects to correct course, loses time. Attention: hilltop ?? Risk of front wheel slides. In the middle of the next right bend, take the gas back slightly and then enter the tight right bend (5) late.
Let it drift very far to the outside and then drive out again very sharply. Do not stay too long in an inclined position, but straighten up quickly and then accelerate. Lots of speed on the straight
take, prepare for the long left-hand bend (6) in the following right-hand bend.
It’s insidious, has a crest where you can slide quickly over the front wheel and has very little grip on the rear wheel. Now it’s a little downhill, very sharp
Take the last left before the start and finish to take all the momentum with you on the straight.