The most emblematic microcars tested at Le Repaire, for Christmas !

Ach, war, groβwoe! And this, for many reasons: already, killing people is bad (yes, yes). Then the winners still pay dearly and the losers pay just as dearly for their surrender. No geopolitical considerations: still it is that in 1945, on the one hand, the Europe of the victors must be rebuilt while the German industry is under close surveillance.

In the 1950s, the various governments came together around a common strategy: to provide the majority of the population with access to individual mobility. This is how priorities emerge regarding the use of steel and factories. Renault launched the 4 CV (1946), Citroën replied with its 2 CV (1948), followed by the Dauphine (1956) then the 4L (1961), while on the other side of the Rhine, Volkswagen had its famous Beetle ( presented in 1938, but actually mass-produced from 1948). Before that, it was simple: it was the motorcycle, possibly associated with a sidecar or even a simple trailer, which served as a family vehicle of the working classes..

In spite of the political will, the step between the motorbike and the car was a little high to cross for some: there was thus room for an intermediate machine. This is where the microcars appeared, which took advantage of the advantages linked to their small displacement (less taxes, reduced insurance rates and lower running costs) to contribute to mobility and which in the 1950s a good decade of growth before the democratization of automobiles became massive and made them disappear, the fault going to cars not much larger, not much more expensive but clearly more efficient, such as the Fiat 500 (1957) or the Mini (1959). History repeats itself, if we remember the Cyclecars of the 1920s, usually driven by motorcycle engines and not having to exceed 350 kilos to be exempt from taxes..

The definition of microcars is subject to various interpretations, but the displacement should not exceed 500 (or 700) cm3. Germany and the United Kingdom (with the Peel or the Reliant Robin) were big producers of microcars, but France too, even if most of the brands are now forgotten. In this universe, there is no doubt that our Messerchmitt is the most emblematic machine of this period ! 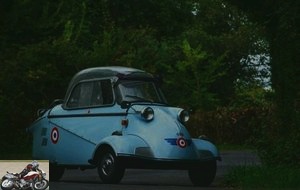 With its cockpit and fuselage-shaped cockpit, the Messerschmitt KR looks like some kind of wingless airplane. No wonder, because the machine comes from Messerchmitt, a company known to have given a hard time to the English Spitfires in the Norman skies. After the war, Messerschmitt obviously no longer had the right to build military equipment: plotting the ways of running the shop, Fritz Fend, in-house engineer, developed this machine which he called KR, for "Kabinen Roller", or roughly "bodied scooter". It will be produced in different versions from 1954 to 1964. Fritz Fend is not at his first attempt: in 1947, he had already designed a machine that moved using hand levers, in order to allow soldiers injured legs from being able to move twice as fast as a bicycle. In 1948, Fend reached a milestone by installing a small 38 cm3 engine, which developed 1 horsepower and allowed the machine to be propelled at 40 km / h. The movement was launched. 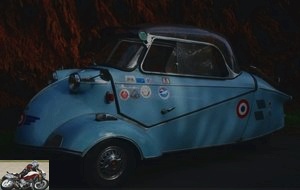 The KR 200 amazes with its lines and dimensions: as wide (1.22 m) as high (1.20 m), it also impresses with its absence of overhang (length of 2.82 m for a wheelbase of 2 , 02 m). The body is made of a steel monocoque body and the screen is made of plexiglass; legend has it that the machine recycled parts of the Me 109, the most built German fighter with more than 30,000 units. The KR 200 remains extremely light: 230 kilos, that’s remarkable. Willy Messerschmitt had a motto: "everything that doesn’t break is oversized". He therefore calculated the resistance of the materials used at the right level.. 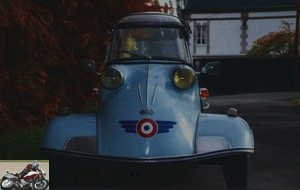 The large bubble is articulated and we take place quite easily (a minimum of flexibility is necessary anyway, if only not to press like a nag on the body panels at the risk of deforming them) on a seat. At the rear, a seat and a half is available, with a small folding seat. In front of you, the downward curved handlebars serve as a curiosity and we cannot say that we are disturbed by the richness of the dashboard. A meter, a clock, a fuel gauge and a few indicator lights, you’re done. The unique wiper is activated by a control placed directly on the motor, at the base of the windshield. 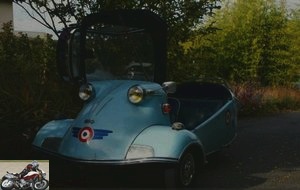 First born with a 175cc 2-stroke Sachs scooter engine (developing 9 horsepower), the KR quickly grew to 200 (in fact, 191cc, 65 x 58mm) and developed 9.7 horsepower. It is associated with a 4-speed gearbox controlled by a small lever placed on the right and whose grid takes the logic of that of motorcycle boxes. The clutch is on the floor, you pull towards you to go up the gears and you push to downshift. The final transmission is made by lubricated chain and in a sealed casing. The general feeling of the transmission is quite "dry" and you can feel the jolts through the bodywork when changing gears.. 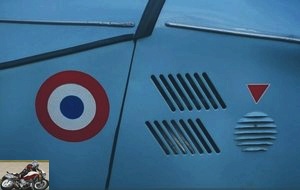 Among the many peculiarities of this engine, we note the two directions of rotation of the crankshaft: roughly, we can also have four speeds in reverse. And besides, that makes the maneuvers a bit long, because you have to turn off the engine, activate the directional system and then restart it and benefit from the gearbox which operates in the other direction. You might as well get off and push the KR by hand to park it…

There are pros and cons: if you want to make a splash, do not take a loan to buy yourself a Lamborghini Aventador S, because it is sure that you will attract even more attention with this KR 200. And you can take advantage of your popularity rating, because the glass roof provides, as the real estate philosopher Stephane Plaza says, the "triple exposure". 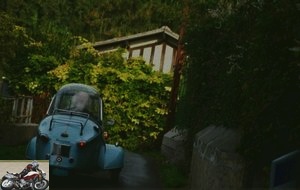 In addition, the small Sachs single-cylinder is rather punchy: despite the reduced displacement, the acceleration is not lymphatic. The 400 meters from a standing start is covered in 27 seconds (compared to the 9 seconds that a modern sports 1000 takes), but if we put this in perspective with a car of the time, like Renault Dauphine, which took almost 30 seconds. to reach 100 km / h, this allows the KR 200 to hold its rank in retrospect. 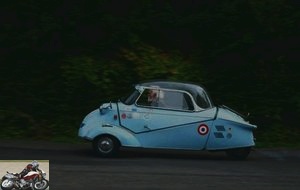 On the other hand, the machine shines very badly and the maneuvers are painful because of the operating logic of the reverse gear..

Admittedly, Messerschmitt broke in its time world records for speed in its displacement (category less than 250 cm3) by covering, on August 29 and 30, 1955 on the Hockenheim circuit, 24 hours at an average of 103 km./h . This is not enough to make it a great road, but the machine is given for a top speed that is close to 100 km / h. 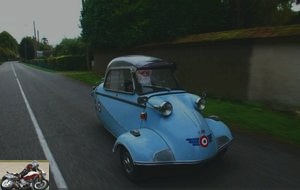 Let’s say that the engine, although limited, is quite voluntary and allows to hold a good 80 km / h cruising. In fact, we will favor the secondary network where, in the hills, we will pass the third to climb to 70 km / h.

This is obviously where we appreciate it the most. Especially since, against all expectations, the KR 200 holds the road very well! It takes little body roll and its steering is very precise: it only takes a little push on the handlebars for the machine to hold onto its small 8-inch wheels and take turns almost like a karting. That is a real source of pleasure on the handlebars. 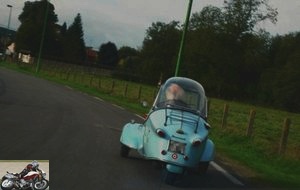 In a KR 200, we relive a little "Back to the future". The very short journey turns into a journey through time, the slightest "Mini by BMW" takes on the paces of 38 tons, nothing is important except the intensity of the present moment and the happiness that one gives to people, so much this KR 200 has an ability to amaze children and establish contacts with the greatest. 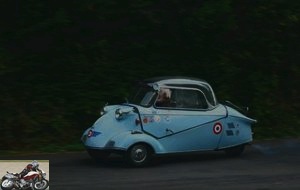 Three cable-controlled drum brakes. Obviously, no ABS or distributor. But once again, the braking is very correct, sufficiently powerful and easy to dose. At 50 km / h, it is able to stop in about ten meters, while the cars of the time often required twice as much.. 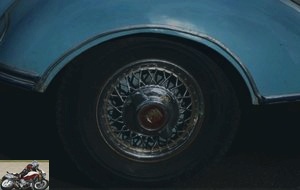 Note that on the basis of this steel hull, Messershmitt produced several bodies in addition to our panoramic bubble coupe, there were convertibles, roadsters and even an astonishing speedster with a shortened windshield. Likewise, towards the end of its career, the KR 200 evolved into the Tiger 500, with a larger engine and the addition of a fourth wheel. A false good idea, since the machine was more expensive than a VW Beetle or an NSU Prinz. Less than 500 units were built.

If the prospectuses of the time praised the quality of the suspensions, we must look at this argument with the indulgence of history. On the other hand, the seats are more than correct and the canopy is waterproof in the rain, which is not nothing. Admittedly, it is hot there under the sun, but the glass panels open up and let a little air pass. Still, for the family who came from the motorcycle, the KR 200 offers incomparable comfort ! 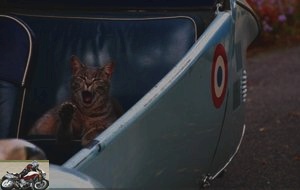 The tank holds 14 liters and consumption ranges from 4 l / 100 in ride mode to 6 l / 100 in more rushed or heavily loaded use. In any case, the range goes from 200 to 300 kilometers, which is very reasonable. We will not forget the 2-stroke oil, of course, just to be followed by a little deliciously fragrant aroma while dispensing with the Crit’Air sticker, collection status requires. 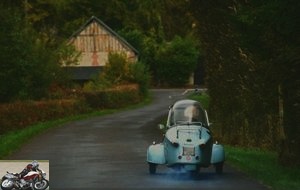 The machine is not rare because it has been produced in more than 40,000 copies. The good news is that it’s not fussy, the quality of its construction allows it to withstand the ravages of time and overall reliability is one of its qualities. The 2-stroke engine requires a segmentation repair every 30 to 40,000 kilometers and the mechanical accessibility is quite good, once the rear panels have been removed. Electricity in 12 V is not capricious, if not hacked. 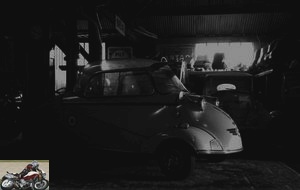 Now let’s come to the bad news: if parts are found to rebuild the engine, rebuilding an original interior or redoing a canopy will be significantly more complicated, as the specific parts no longer exist. And the aura of the machine allows it to hold a solid rating, around 30,000 euros, while transactions remain quite rare.

This KR 200 did not need to appear in the films Brazil by Terry Gilliam (1985) or The Adams Family by Barry Sonnenfeld (1991) to enter the history of mobility. If its lines make it the ideal machine for a sci-fi film from the 1950s, the quality of its construction and its great reliability have shown that it does not have only the mouth. This machine is a real arm of honor to the greyness and uniformity.

Today, it’s hard not to fall under its spell, to say that we would take the luxury of thumbing our noses at the passing of time and savoring this art of living of driving differently. And in the event of a hypothetical next road limitation to 80 km / h, the KR 200 would become more modern than ever. ! 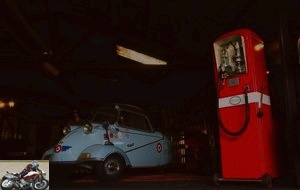