A tire that is not cold in the eyes.

Successor of the Roadtec Z 8, the Metzeler Roadtec 01 is a 100% new tire that claims a real technological breakthrough with its predecessors. We were able to discover its manufacture in the Breuberg factory and try it, on the road as well as at the Bosch test center in Boxberg… Exciting!

We were waiting for the Roadtec Z10, but finally, the 01 is coming. A name that does not follow the logic of the range, for a tire that is more of a revolution than an evolution. The objective of the German / Italian manufacturer was to improve the longevity of his new foal as well as his behavior on poorly adherent ground. Let’s see how he did it. 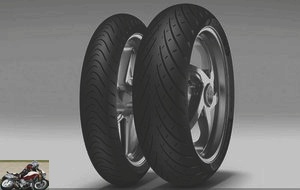 Draw me a sheep

Visually, the 01 avant is distinguished by its design made of transverse grooves, which evoke the Michelin slats, in much wider and much more marked. Like his competitor, we immediately see that we will have to deal with a serious candidate on rainy days. 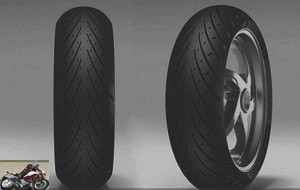 The aim was to improve mechanical grip on slippery surfaces. A quality reinforced by the use of a mixture of gums very heavily loaded with silica for optimal resistance to cold, which often goes hand in hand with a slippery ground. The rear tire is equally remarkable for its high notch rate and the width of its designs. For optimal longevity, it is a bigomme, which uses a mixture close to that of the front on its shoulders, while the central band is also reinforced with carbon black, in addition to silica.. 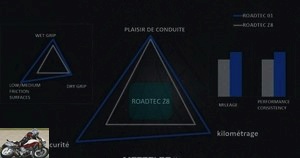 The structure of the roadtec 01 consists of a 0 ° belt, which according to Interact technology is distinguished by variable tension zones. They allow the rubber they support to work in different ways depending on the area, while ensuring comfort and stability. For heavier motorcycles, Metzeler has developed an "HWM" version, for Heavy Weight Motorcycles. It is distinguished by a two-ply carcass, compared to only one on the basic version. The "HWM" front tire is also reinforced, but to a lesser extent. It is satisfied with a single ply, but has more rigid sidewalls and a different mixture of gums..

Finally, to reduce the natural wear associated with micro-slips in the tire / ground contact zone (due to the sagging of the tire), the length of the contact surface has been reduced, while its width has increased. to maintain sufficient area. Better still, the overall contact surface has increased by 5%, with the added bonus of better pressure distribution.
Questions and above all answers. 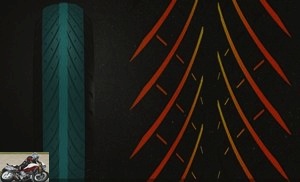 When you discover this tire that looks like a rain tire, you immediately wonder about its lifespan, its stability at high speed, or its resistance in the dry. On these points, Piero Misano, R&D director at Pirelli Metzeler reassures us.

LR with such a badly notched tire there is no risk of both rapid and irregular wear?

PM: We paid special attention to the orientation of the tread patterns and the rigidity of the paving stones, so that their edges do not attack the ground suddenly. This is what the small non-opening cavities are for. They allow homogeneous deformation in all directions. We also used a silica reinforced gum which improves longevity and cold resistance. The silica nanoparticles have a huge contact surface with the rest of the gum. On a 190 tire, the silica / rubber mixture bonding surface is 142,800 m2 (you read that correctly!). This intimate mixture is extremely resistant. However, it is also very flexible when cold, thanks to the addition of liquid polymers which allow it to perfectly follow the exact profile of the soil. So we made enormous progress on highly slippery surfaces and we managed to do 10% more km than the Z8 M / O which was already a benchmark in its segment (5 comparative test wins in a row!).

It has a lot to do with the rigidity of the carcass, the quality of the connections between the different layers of the tire and the distribution of pressure on the ground. It also depends on the front / rear interaction. The center strip of the rear tire is smooth, as it takes advantage of the drainage from the front, so it is stiff. You can also test the stability at very high speed.

PR: it’s a collection of things. There is the nature of the rubber mixture, loaded with polymers, the orientation of the treads, perpendicular to the tensile forces and of course the rear bigomme structure. You can also test it on a track, as on the road. 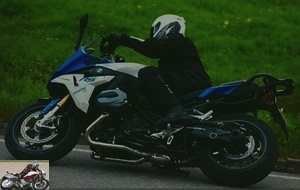 From theory to practice

After a series of Iberian trials under hail or downpours, we had to go to Germany to find a blazing sun and mild temperatures!

On the Germanic departmental roads, we discovered a very neutral and extremely reassuring tire once on the corner. Easy to swing, it does not straighten up when braking when entering a curve and gives good feedback to its pilot.

With the handlebars of very different motorcycles, such as BMW S 1000 R, R1200 RS, R 1200 GS, Kawasaki Versys 650, we are quiet whatever the pace, without having the feeling of piloting a thin blade, as can be the Pirelli Diablo Rosso III. The liveliness is a little less, but what could be more normal, we are on a GT sport tire which offers an incredible wide spectrum of use, as we will be able to see throughout our day..

To be clearer, we can say that we find the same differences between a Diablo Rosso III and a Roadtec 01, as between an S 1000 XR and an S 1000 RR, which are each benchmark in their segments. The universes are different and so are the expectations! 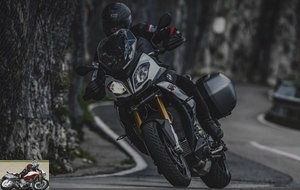 With such a profile, we suspected that the Roadtec 01 would be like a fish in water and it did not disappoint. Tested on a track that alternated wet and dry areas, he went from one to the other with incredible ease, always seeming to be in his element. No apprehension on the handlebars, when or entered the wet, no more than when putting the angle and gas, just at the entrance of the dry zone, with tires still saturated with water. Here again, we had a wide range of motorcycles: BMW Nine T, S 1000 XR, Yamaha MT 07 and 09 or Honda CBR 1000 R. 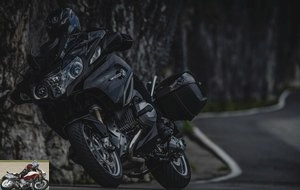 If you hit the brakes, you’re a coward

It was a bit like the theme of the following exercise, which consisted of driving as fast as possible on a short circuit, without touching the brakes. A good way to test the grip in the dry when you entered a little too hard in a curve, for lack of misjudging the engine brake, for example. It is clear that the Z 01 accepts beautiful angles without flinching and that it readily forgives excess optimism. Who says short circuit says turnstile and therefore maneuverability. Here too the Metzeler did not disappoint, swinging easily from angle to angle. A new sign of its versatility! 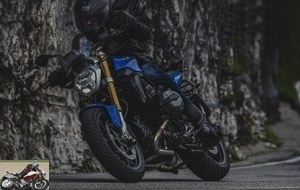 Under the paving stones, the beach

After these little appetizers, the Metzeler representatives who really didn’t want us to be bored, took us to wet cobblestones to do comparative braking tests, with the Roadtec Z8, which, let’s remember, was a reference in the category, before the arrival of 01.

Our weapon, a good old 1200 Bandit ABS, which is certainly not the last cry in terms of suspensions, braking and management of its ABS. But this will only make our test more demonstrative.

Launched at 60 km / h, we enter with a little apprehension on a paved area, copiously watered, with the mission this time to brake as short as possible. The coefficient of adhesion, oscillates between 0.4 and 0.5, which makes little!

To carry out this test, we had three tests per tire. Verdict, an average braking distance of 20.5 m with the Z8, for all the journalists present, which drops to 18.8 m with the 01, i.e. a difference of 1.70 m, almost the length of a motorcycle, with an accuracy of 20 cm on all measurements. Beyond the numbers, the sensations are clearly in favor of the 01, which brakes well in line, while with the Z8, you have to fight with a motorcycle that heckles, to manage to stay in line and on its wheels. Know that I spared no effort for this perilous exercise since with better braking at 16.77m, I even taxed the Metzeler tester! Once is not custom… 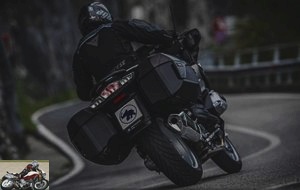 Last celebration of the day, a few laps on a 3 km ring with banked turns, to judge the stability of 01 at very high speed. Due to the lack of unsuitable rider equipment (we thought we were only driving on the road), I gave up the deal at 280 km / h, while the S1000 RR still wanted more, but it did not budge a bit. When we tell you that this tire has a wide spectrum of use, we are certainly not lying to you.

Small detail which is not one, we did not ask for the inflation pressure for this test, but be aware that after three passes, the tires were so hot that we hardly put our hands above! With the support of the banked turns and the speeds reached, the tires were very stressed.! 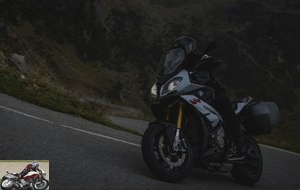 The latest from Metzeler flaunts impressive qualities. In addition to a very high level of grip, whatever the nature of the ground, it is imperial at high speed and, let us remember, a longevity increased by 10% compared to the Z8 M / O, which was already a big roller. In short, with the arrival of Dunlop Roadsmart III we can say that the sport GT category has made yet another spectacular leap in performance, whether driving in the dry or in the wet. You can go there with confidence, now you have no excuse to leave your motorcycle in the garage, no matter the time or the distance. Go ride!!!

News on the novelty