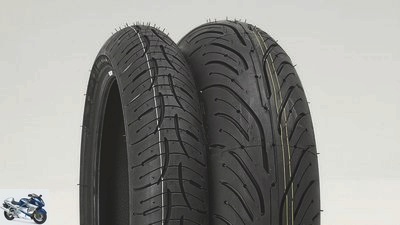 Michelin Pilot Road 4 in the test

4th place: rain? Road 4. This has been the essence of our touring tire tests so far. In the meantime, however, some guys have intervened and even pushed their way forward. The bottom line is that the Michelin remains a good all-rounder for every day.

With its fast response behavior and comfortable set-up plus good self-damping, Michelin has set up the Road 4 to be very suitable for everyday use. The handiness is also pleasing, so that some stoic goats can be given a small but fine dynamic cure by changing tires. With a sporty pace, the touring rubber of the French falls slightly behind with slight flexing movements on the hindquarters. This means that you have to accept small compromises in terms of steering precision and behavior at the limit. The pitching impulse when braking in an inclined position can also be felt.

The Michelin Pilot Road 4 in the wet test

For a long time the Road 4 was the authority in the touring league when it came to optimal performance in the rain. And as before, the non-slip rubber can be steered confidently through wetlands. However, competitors like Conti and Pirelli have now drawn level.