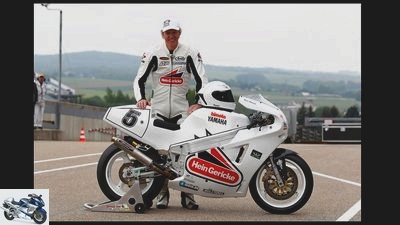 Peter Rubatto has passed away
Mister Superbike was only 62

Peter Rubatto, born in 1955, shaped the German motorcycle racing scene as Mister Superbike in the 80s and 90s. Peter Rubatto got his nickname in 1984 when he won eleven of twelve races in the German championship.

The trained car mechanic has won countless races in the course of his career. Rubatto drove in the Superbike DM, where he became champion in 1984, in the Superbike World Championship as well as on the Isle of Man, in Macau and Daytona. In 1991 he was the only one to win the Pro Superbike against Udo Mark, whose team boss he became in 1995. Mark won the Thunderbike Trophy at the Motorcycle World Championship under Rubatto.

On the Isle of Man, he was the last German to score points in Formula TT. On the course of the old Sachsenring he broke Agostini’s record with an average speed of 189.22 km / h and set a new record that he will probably keep forever.

Rubatto later became involved as team principal and driver manager. Peter Rubatto also maintained good contacts with the PS editorial team and repeatedly grabbed the handlebars for the journalists to conjure up fast times on the asphalt.