3,500 kilometers of tests on the road, in Rally Roads and even at the Nurburgring !

Efficiency and longevity: probably the best kept secret of motorcycle tires for less than € 200 per train !

It is thorny, the question of tires, for all bikers who have high-performance machines, who know how to use them and who are also asking for a minimum mileage longevity.. Knowing that in this matter, having the butter and the money of butter is just impossible. On the other hand, the dairyman, if she likes racy machines, it is negotiable.

Stef is one of those bikers looking for the best compromise. He likes sport bikes (he owns a Kawasaki 650 Versys for everyday use, March Moto Madness and sometimes Road Rally, as well as an Aprilia Tuono V4 for debauchery) and he rides. Many. All over. Holidays, road trips with friends (all as happily lit as he is), road rally as an enlightened and demanding amateur and even time laps on one of the three most dangerous circuits in the world, the famous North Loop. of the Nurburgring (with the Isle of Man TT and the Macau GP, we have to hold the podium). Not bad as a motorcycle vision, no ?

Last year Stef and his happy band of friends went on a road trip. On the program, the Alps and 8 hours of motorbike per day to make a maximum of passes by rolling like, to use their words, "morons". Far from us the idea of ​​condoning this kind of asocial practices, but as professional journalists, we owe it to ourselves to transcribe the information as it is.. 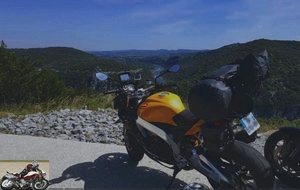 In short. Riding their war machines (two Tuono, a KTM 1290 SuperDuke, an MT-09 and a Ducati Monster 821), Stef and his friends set off with a perky and brawling soul. Late braking, big trickle of gas on the angle, drifting out of a curve, they filed down the asphalt and took only a short time to look at the landscape. At the same time, the Alps are overrated.

And what had to happen happened: our beautiful bunch of idiots found themselves running out of the rear tire, having smoked it cleanly in just 2,000 kilometers out of the planned 3,500 kilometers. Our friends had to buy tires in Switzerland, discovered that the local prices are twice the French prices and that the availability is quite uncertain in the middle of summer. In short, continuing the journey cost them an arm and a leg (and not to mention the few Swiss radars that they panicked on their way) and, so that the experience is not just a light that only serves to illuminate behind you, Stef decided to do a little research so as not to experience the same mishap during the 2016 road trip..

When you drive hard on a sports car or a radical roadster, no one wants to compromise on safety. And this is where the premium brands put forward a strong argument, at the height of their price: their reputation. !

Stef agrees: "before taking part in the March Moto Madness (the guy who jumps in Versys with top cases and side cases, that’s him!), I would not have imagined that the Czech brand Mitas could make good tires. But there were a lot of guys on R 1200 GS who had them and they were happy ". 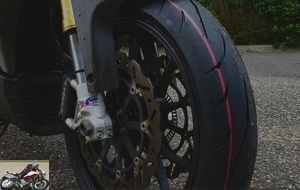 Like a good geek, Stef goes around the forums, especially foreign ones, because in France the notoriety of the brand remains weak or even non-existent. And he realizes that some communities find them quite well, these Mitas. Reassured by the diversity of the testimonies and the concordance of their positive tone, Stef takes the plunge and rides a SportForce + train on his Tuono V4. A clever operation since the train cost him less than 200 € the complete train with 190 mm at the rear, compared to the more than 250 € that he should have paid for a premium brand, or even almost 300 for the Metzeler M7RR . And by looking a little, we regularly find specials at 150 euros per train in 190 mm. Financially, it’s unbeatable. 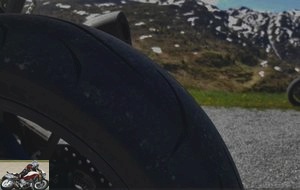 The other participants in the 2016 road-trip made a close choice, but less "economical", by fitting more road tires on their sporty roadster, such as JC the king of wheeling at the exit of a curve, with Pirelli Angel GTs on his KTM 1290 SuperDuke, or Max on another Tuono V4 with Bridgestone S21s, before leaving for a big trip in the South of France,

Qualities close to the best

Stef has a long experience and has mounted different types of tires on his bike: he has good practice and excellent feedback on Dunlop SportSmart ("front axle with a particular feeling and very sensitive to pressure"), Michelin Pilot Power 3 ("terrible behavior after mid-life"), Bridgestone S20 ("very good grip but ridiculous lifespan") and Metzeler M7RR ("very good, nothing to say").

As we can see, opinions are decided. Well, the folks at Mitas will blush with pleasure because Stef simply compares his Mitas to the Metzeler! "I mainly ran it on drying asphalt and there is nothing to report compared to the other tires, I did not notice any unusual reactions. And, as a bonus, it is very easy to fit", specifies Stef whose tire consumption made him buy an assembly machine. Mitas do not have a paraffin coating and are therefore easy to break in. 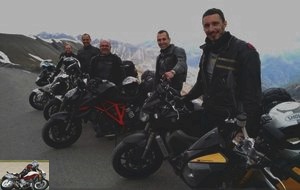 "Subsequently, the confidence building is immediate and I did not notice any parasitic reaction on the angle, no more than a stall". During the road trip, the Mitas SportForce + were completely satisfactory: "I drive dynamically with lots of big raises on the angle, full in the torque and the grip was there, the bike swayed well and remains lively".

The best moment ? "In the Var, under the flood, I was able to follow JC and Angel GT, even if I find that the Mitas lacks a little feedback in these conditions.

Excellent on the road, a little less in extreme use (8’28 at the Nurb, anyway!)

The advantage of Stef is that when he tests, he really tests! Thus the Tuono V4 + Mitas SportForce + pair found itself involved in the Rallye du Dourdou. "I kept a very good feeling, even doing things that were not very clean, like putting the first one in full on the brakes and on the angle; the Mitas then emits a little squeak but it immediately regains the grip".

In Road Rally, you do not really use the maximum angle, on the other hand you make big raises and the beginnings of sliding are late and considerate. Especially since with the bumps I cut the traction control of the Tuono; I was even able to try trapper braking with the warm tires. Well, I put one on and ended up in a ditch, but it’s my fault, I was coming really too hard ". 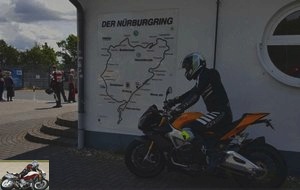 The level of requirements is raised still a notch: Stef has gone to confront the infamous north loop of the Nurburgring, in Germany, the famous Nordschleife, with its 21 kilometers of track, its 180 turns, its 300 meters of vertical drop. .. There, the Mitas was less royal … even if it is necessary to put into perspective because Stef turned with 8’28 in the traffic, which starts to go strong !

"I drove at the Nurburgring with M7RRs and Pirelli SuperCorsa and there, the Mitas is not level. It is really below the Pirelli and a little below the Metzeler. There is no problem with it. the front which heats up quickly, on the other hand the rear did not appreciate my 167 horsepower in go-around with the fast pull on the angle. With the SuperCorsa, I put the APRC on the third of the eight levels and it hardly ever ignited, whereas with the Mitas, I often had ignition cut-offs, so I lowered the traction control level and there, the bike began to slide gradually when exiting the curve , it remains healthy, but it does not drive well. It is really crippling on the raises ". 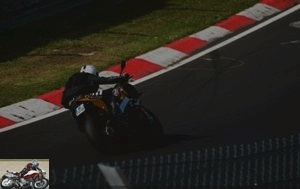 Let’s not forget that the Mitas SportForce + is not specifically a track tire.

One last quality? "Just like the M7RR, even at the end of its life, the Mitas is royal". 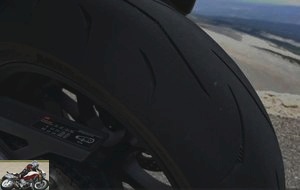 The price remains the major advantage of this Mitas SportForce +, especially for large consumers of gum, who accumulate changes. Those who drive mainly in the dry on the road will have no problem with a tire that shows its limits, especially on the track..