The mythical Mandello V11 having bowed out, the transalpine brand has been entrusting its performance image to the 1200 Sport, since the end of 2006. Boosted by the evolution of the twin cylinder called Ottovalvole, 4 valves per cylinder in early 2008, this more dynamic version of the Breva differs only slightly. A little more powerful and torquey on a different gear range, the Sport is also adorned with a seat cowl, a windshield and a specific exhaust. 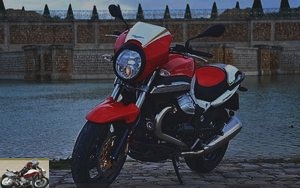 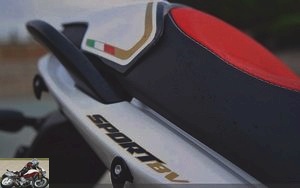 This sporting eagle is an imposing machine. Its broad build, however, mixes styles with elegance. Thus, classic in appearance, the large round optic has multiple reflectors. 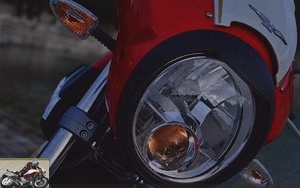 Around the steering column, air intakes dress the inside of the long side scoops. Flanked by chrome, they frame the large 23-liter tank (including 4 reserve) and cover the engine block. 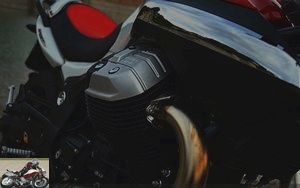 The respectable 1200 cm3 twin and its universal joint impose and underline, with their matte black finish, the red and white Corsa bodywork highlighted with a gold border… 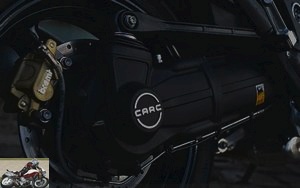 Only the frame plates, tubular steel, are visible and extend to support the passenger footrests. Very beautiful metal parts that protect two plastic inserts. The large-diameter collectors flow into an aesthetically pleasing satin silencer. Its end takes up some aeronautical codes, a logical choice when you know the sound of the Guzzi bomber. The superior quality of the general finish is particularly rewarding.

Surprisingly, the front suspension is entrusted to a simple telescopic fork. Signed Marzocchi, and equipped with 45 mm stanchions, it is adjustable only in rebound. The Sachs rear shock offers adjustment in preload, via a dial on the left side, and in rebound.

To slow down the ardor of the pilot and the 240 kg dry of the machine, two Brembo four-piston calipers pinch the front 320 mm discs. A 2-piston assembly brakes the 282 mm rear wheel. This Corsa version comes with an ABS system as standard. 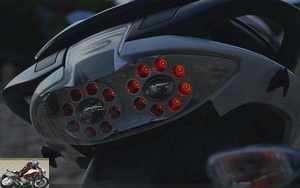 The design of the rear loop is particularly successful, incorporating pretty LED lights. There are also four attractive tie-down hooks and two large passenger grab handles. Another practical aspect, once raised, the saddle reveals a small space to accommodate a disk unit. 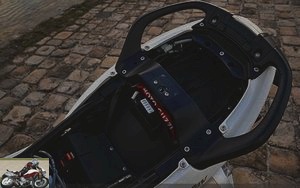 We also note the easy access to the battery and fuses.

Comfortable and spacious, the seat, embellished with stitching, is 800 mm from the ground and is easily spanned. Fortunately, because the weight is noticeable to straighten the machine. We immediately take the measure of Mandello’s road roadster. The long tank plunges towards the wide flat hanger with variable diameter overhanging a vast dashboard. 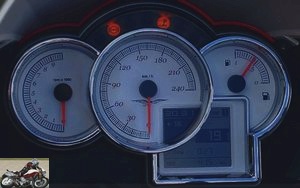 Bringing together no less than 3 counters and an LCD window, the whole offers improved readability. Both the number of information, its dispersion and the fineness of the graduations make it difficult to read them.

Analogue, semicircular tachometer, central tachometer and fuel gauge are displayed on a white background. The digital unit groups together, in the upper left corner, clock and outside temperature. Other functions take up the rest of the space and can be selected from the left-hand controls in 3 modes. The first two each group together partial odometers, journey time, average, instantaneous consumption, maximum and average speed. The third allows the user to start a stopwatch, check the battery voltage and access various parameters (choice of maximum speed for the shiftlight, display language, etc.). The appearance of the upper triple tree is sober but also of quality. There are the ABS warning and disconnection commands. 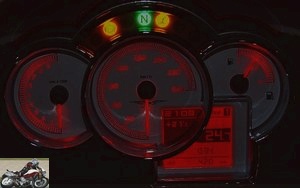 The kickstand tab, with a deployment indicator, falls perfectly under the heel. Just like the footrests. The position is, for adults, rather straight, and the hands fall on the handlebars. The mirrors give a good field of vision and, despite the energy of the twin cylinder, vibrate little.

Pressing the starter wakes the big twin, which coughs and growls, seeking its slow-motion breath. 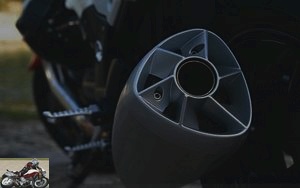 Ample vibrations and overturning torque sway the crew and capsize the hearts of connoisseurs … The softness of the controls is exemplary and the Guzzi Sport takes off quickly, carried by a large torque already very sensitive. 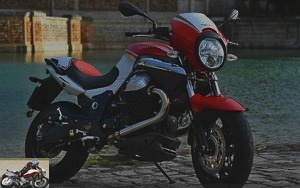 The feeling of weight fades, giving way to an astonishing balance. The cheerful roar of the machine is a pleasure on the boulevards. We catch ourselves slowing down and then relaunching the bike, for the pleasure of the senses. A giant’s hand then seems to push the pilot behind the back. Stalled on the third report, in the middle of the urban flow, we also appreciate the flexibility of the Italian twin. Even in 4th gear, it can resume at 30 km / h and 1,500 rpm. Comfort follows the same trend. Shock absorber as fork are, basic, adjusted for a travel pullman. 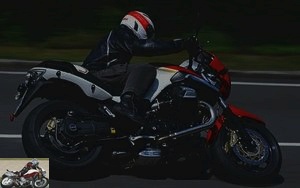 The box, although precise, is not very straightforward. But this Sport Corsa only had about 20 kilometers on the clock … a break-in is called for. No miracle, however, for the turning radius inspired by an English machine, no doubt … It is above all the height of the fork that is troublesome during maneuvers. The heat given off by the Italian bloc is also noticeable in the city. Pleasant in cool or cold weather, the extra calories are less pleasant to endure in summer, in the middle of traffic.

Resuming forcefully in intermediate gears, the racing bird squeals in a bewitching revival. After 5,000 laps, the thrust is even stronger and sends the crew to high speed. Enthusiastic at a good pace to take advantage of the coupleuses raises, the limited protection however encourages to reduce the throttle. The small fork crown quickly shows its limits, forcing the rider to lie down in order to avoid, in addition to the points, losing his mind. Lower triple trees would tip the rider more forward. Wind resistance would thus be better. 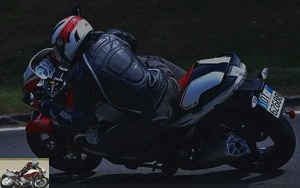 Like a real roadster that it really is, the 1200 Sport Corsa purrs at just 4000 laps, in 6 ° at 130 km / h. This report is quite long and, on the road, we will rather stay in 5 ° to benefit from the best of the engine. The air pressure is then bearable, much more than the endless strip of straight asphalt.

Cut out for the long road, of course, the Transalpine is much more charming on the secondary network. But no sport in her. The long passenger footrests spread the heels of the pilot, hampering his position. Which, coupled with a fairly prominent reservoir, makes any swaying even more difficult. In the old way, we tell you ! 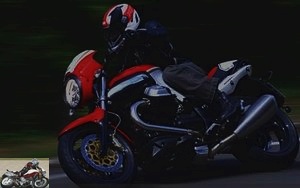 And with happiness. Because the significant torque available from low revs makes it possible to get out of bends energetically. The 10.7 m / kg of maximum torque delivered at the rather high speed of 6,750 rpm, however, testifies to a more sophisticated mechanical behavior than the rest of the range. Maximum power also arrives barely 300 revs higher … Everything is perfectly transmitted to the rear wheel by the efficient cardan shaft, with performance at least equal in quality to those of the German cousins.

This engine profile does not affect the pleasure and performance of its engine, which can be tasted in 3 ° or 4 °, with a coiled pilot. But above all, well-tuned suspension! Too soft, the front / rear suspension tuning is not the best when the pace increases. The 1200 Sport can even be tricky to take along… 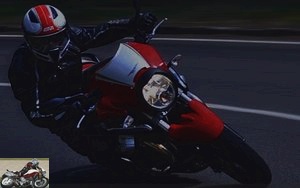 It’s neither the most alert nor the liveliest, of course, having a natural tendency to widen its trajectory slightly in curves. But once the hydraulics are closed and the preload seriously hardened, we finally discover a road savvy. We regret all the more the lack of a better quality, inverted type fork like that of the Griso. Lacking rigor, the front axle is its weak point and its consequent weight requires careful attention to the trajectories.

But its balance, the large lever arm of the handlebars and generous ground clearance give a lot of pleasure. At the sound of his rocky and full voice. The Guzzi throws itself into every corner with a fierce growl, assured of the excellent grip of its Metzeller Interact M3 tires and progressive, powerful braking. It’s not the easiest to take, but not the easiest to follow either…

Each deceleration then causes the exhaust to gurgle. A pleasure that is renewed by gorging on a burst of torque each time when accelerating, before cutting back on the throttle… 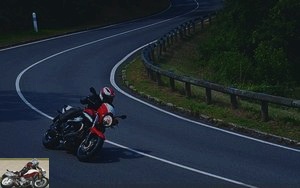 The suspension is, to a certain extent, the weak point of the 1200 Sport Corsa. For a road, and once adjusted hydraulically, the damping is very good. So homogeneous and comfortable, you can cut the miles on your handlebars. We would still like to find Sport, see the Corsa side of this 1200…. The brand’s ultra-confidential sports car, the MGS 01 does not find any offspring there. 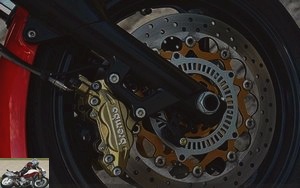 No particular criticism on this point, apart from a slight lack of bite from the front calipers. Again, a better fork would be beneficial. The rear allows the machine to be seated in bends and is easy to control.

Like a good traveler, this big road roadster offers a special place for the passenger. Measured leg flexion, comfortable grab handles and a soft seat. Without forgetting a safe curved tank to put your hands on…. Of course, don’t forget to remove the pretty seat cowl. The optional luggage storage will convince a long-term companion.

The pilot is also rather well accommodated. Only the wind deflection is insufficient on long journeys at sustained speed. 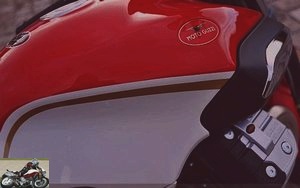 True overdrive, the last report allows cruising while sparing the consumption of explosive liquid. The average, solo, is 6.6 L / 100 km. It is possible to achieve between 330 and nearly 400 km with a full tank on a mixed route. In faster, and especially urban, use, the beauty of Mandello requires up to 7.3 liters of gasoline per 100 km. 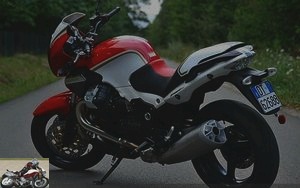 The Moto Guzzi 1200 Sport 8V ABS Corsa hardly gives any illusions about the skills that its name lends to it. Comfortable and dynamic road, it will satisfy lovers of large comfortable and torquey roadsters, with a flattering finish. Pleasure for the senses, it reveals its pleasure over the miles. The powerful flexibility of its engine, the excellence of its cardan transmission make it a powerful and engaging road. Able to bring her crew along or to dawdle along the roads, the Italian wants to be a faithful companion rather than a frivolous mistress. Its neat plastic contributes to its charm. Beautiful from all angles, welcoming and demonstrative, the 1200 Sport suffers only from slightly flexible suspensions.

Available at a price of € 12,790, this Corsa version, with ABS as standard, is at the same price as the standard versions (Guzzi black and titanium gray). If we refer to the competition from the roadster segment, the Yamaha XJR 1300 at € 9,889 and Honda CB 1300 S at € 10,990, without ABS however, will be tough, not to mention the Bandit 1250 N, at € 8,249, the cheapest but without the same level of equipment and finishes. But the Sport cannot be bought on a simple roadster criterion.

The Guzzi relies on its characterful twin-cylinder, its ABS and its efficient and practical gimbal, to make a difference and seduce aesthetic backpackers..