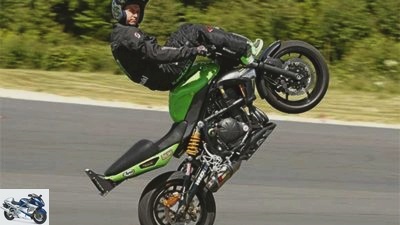 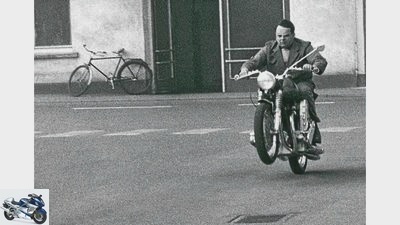 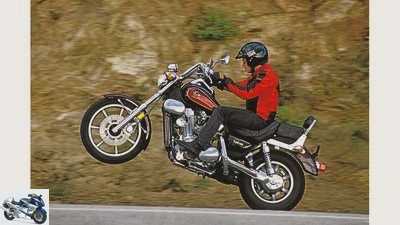 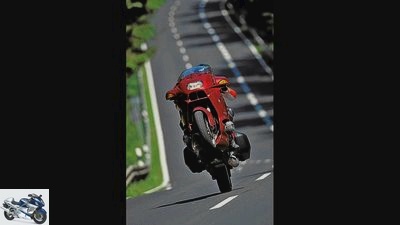 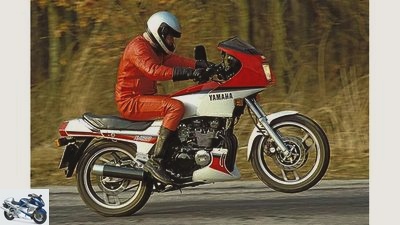 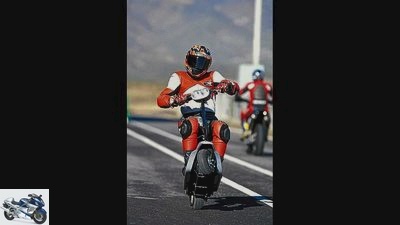 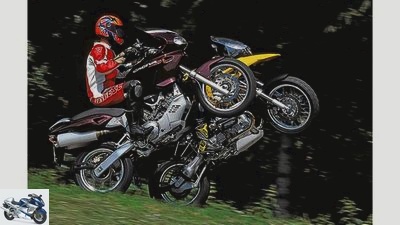 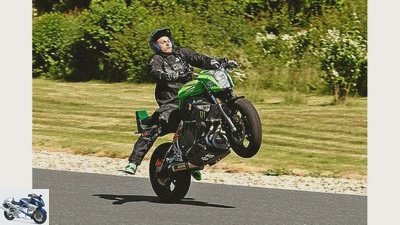 7/8
A few more tips for the perfect wheelie:
Not like that: Too much gas, tearing on the handlebars – the motorcycle drives with the driver who is sitting too far back, cannot properly reach the levers and has no feet on the pegs and therefore has no control over the motorcycle. 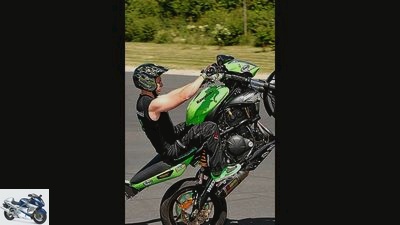 8/8
That’s right:
Arms slightly angled (therefore without jacket for the photo), the hand levers must always be easy to operate. The foot always (!) Belongs over the brake pedal, because everything is balanced by the rear brake.

Motorcycle wheelie in theory and practice

Finale: Wheelie in theory and practice
The spectacular motorcycling on just one bike clearly explained

Ever since humans have dealt with technical equipment, they have tried to explore its limits. This isn’t always sensible, sometimes ends up on the back wheel, and can even be fun. Provided that the person has mastered the technology. If he does not do this, the matter can turn out to be fatal. In the worst case, with a subscription cancellation.

Of course, what you (have to) see here is unbelievable nonsense, late-pubescent showing-off and completely crazy anyway. And it is deeply human, because perhaps it is precisely the sometimes irrational leisure activities that distinguish Homo sapiens from, for example, Proteus anguinus. While the European grotto olm is almost exclusively concerned with looking after food and procreation, motorcyclists at least have the chance to get off the front wheel from time to time to compensate for their daily struggle for survival. So to ride a wheelie. A research trip lasting several hours into the MOTORRAD archive unearthed incriminating material that clearly proves that the senseless unicycling was already practiced in the early days of motorcycles. The wheelie, which at that time was still called Hochstart or had no name at all, is mentioned for the first time in the MOTORRAD edition 7/1966. Of course, there were already pictures showing the front wheels in the air in the years before, but these were exclusively trial or enduro riders who had lifted the front wheel for purely practical reasons. The honor of being the first person to get off the front wheel out of pure joy in MOTORRAD belongs to NSU employee Werner Sautter. The German off-road champion in the 250cc combination class from 1955 to 1957 did a few brisk laps on the NSU factory site in Neckarsulm with the first Munch Mammut 1000 without a helmet (!) Before the four-cylinder block with Ernst “Klacks” Leverkus on a MOTORCYCLE test drive could go.

Finale: Wheelie in theory and practice
The spectacular motorcycling on just one wheel explained in an understandable way

The review of the image productions of the following years and decades shows that the test driver colleagues let themselves be carried away by many stories about wheelie insoles. The pictures were rarely published. On the one hand, the manslaughter club worked as a role model, on the other hand there was now the sister paper “PS Das Sport-Motorrad Magazin”, which was allowed to engage in such mischief with impunity. Nevertheless, even at MOTORRAD, impressive photo documents were created that prove, for example, that chopper or cardan can be combined with the subject of wheelies. And even in combination, as the pictures of a wheeled Kawasaki VN-15, which are intended for internal use, impressively show. 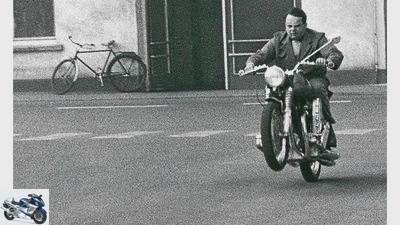 Since there is of course always the danger that a few contemporaries will be seduced into hedonistic hustle and bustle by such images, MOTORRAD let the full-time free and fun rider (he hates the term “stunt driver”) show Oliver Ronzheimer on a closed route, which is reserved exclusively for professionals should stay. But the Kawasaki man also has a few tips ready for the wheelie novice: “Driving a wheelie has nothing to do with power. You can also do this by bike or scooter. It is very important that the rear brake is always and everywhere accessible, because everything is balanced in interaction with the clutch, and less with the throttle. Tugging and tearing on the handlebars might blow the front wheel up a bit, but that has nothing to do with a controlled wheelie.

High speed is also unnecessary – just roll up slightly, pull the clutch, accelerate vigorously, but not digitally, let the clutch come on in a flash – but don’t let go – and hold it at the pressure point. Always pull the clutch when the front wheel rises too much. The rear brake supplements the clutch work, but does not step on it with a gross motor. Important: Don’t do anything with the front brake! ”So much for a bit of theory, which you don’t necessarily have to put into practice. And if so, then only away from public traffic and with a lot of space around it. Even better: Marvel at Olly and colleagues at their completely pointless and crazy shows. Not so good: cancel your MOTORRAD subscription now – because of “role model function”.