Atlas … Titan of ancient Greece, forced to have his back smashed because carrying the world. Then the mountain range of North Africa. Above all, emblematic Norton model, preceding the Commando of the 60s in the saga of the manufacturer. Today is a trip to the scrambler clan. More than that even, because this machine is presented as an accessible model, almost inexpensive compared to the 961 Commando and 1200 V4. But a Norton is not an Englishwoman who lets herself be coaxed like that. Even at the entry level, the bike knows how to be desired, and its appetite to trudge does not mask its good manners.

The Atlas has character, and a split personality. Rather road in this Nomad version, more rural in its Ranger version. Whatever the version, the Englishwoman asserts her presence, a precious side, a desire to certify a coat of arms more than a reason. Both the form and the details are in the vein of fine machines. We do not see on most scramblers such perforated triple trees, an exhaust protection grille of this ilk, such attention paid to all the constituent elements. The front axle leans squarely in excess, like its alter ego from Moto-Morini. Fearsome, almost imperial, this enormous inverted 50mm fork supported by 320mm brake discs and 4-piston monobloc Brembo calipers. A beautiful tool; but except for the show, what’s the point of putting hypersportive gear on this kind of bike? On the other hand, it is undeniable that the owner will get his money’s worth, and that it will be difficult to take the faulty bike with such a bow..

Roll in the middle of the autumn leaves, feel the spring while seeing the freshness of the trees reflected on the chrome housings, evict the puddles after a summer downpour, that’s a bit like Atlas Nomad; except that we will not really want to dirty the beautiful spoked rims and the minimalist mudguard, also chrome.
Certainly more ready for a biting ride, taken more than happily with this brand new engine. To put it simply, Norton cut in half the V4 of its hypersport, then established a displacement at 650 cm3. We find the same bore for the cylinders but a longer stroke. This parallel twin with 270 ° setting promises great performance with an advertised power of 84 horsepower. Not bad, not bad at all for this kind of mechanics. A bi MT-07, however more generous in cubage (689 cm3), already sends a very fun 75 horses. The torque is within the values ​​of the category with a 6.6 mkg.

The suspensions are also of a higher level. The ‘Roadholder ‘fork is adjustable from anywhere. The shock absorber, from the same claw, will only have the preload.
For a more road-like machine than the Ranger, we would expect to see a 17-inch tire rise … Lost, only the rear displays this dimension, with a large 180 / 55-17. The front wheel is 18 inches, with a gommard of 110. The Ranger differs with more trekking shoes.
Norton chose to offer it a greater suspension travel than on a standard roadster. 150 mm on both sides. This allows some pranks, and results in a somewhat high saddle height, at 824 mm.
More playful than the Ranger, the Atlas 650 Normad benefits from a shorter wheelbase, 1446 mm, while sharing an identical weight (178 kilos) and frame. A new tubular steel perimeter structure encloses the engine while holding a steering column inclined at 24.2 ° and a remarkable aluminum swingarm. The bi-material saddle with stitching also deserves to be appreciated for its overview.

A tempting approach that this Atlas, with an undeniable need to differentiate itself, to be admired. Norton being far from the production capacity of his compatriot Triumph, and out of scope of most manufacturers, the 650 Nomad will be produced only 250 copies, for a price of 9,995 pounds. This will give us approximately 11,500 euros for the copies that will arrive in Europe. Add to the bill a nice dose of taxes and this scrambler will be much less accessible than hoped. But it will remain the least expensive of the range, and rather a nice way to invest the Norton dynasty. 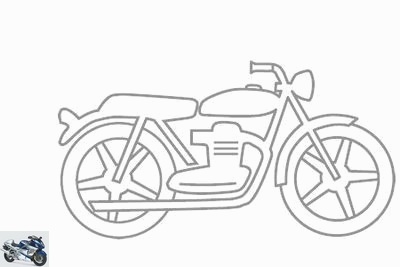 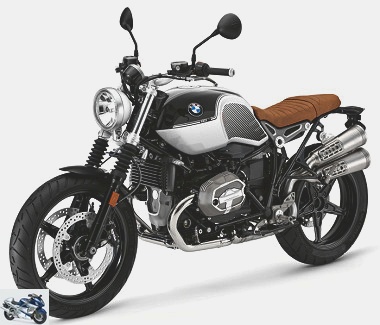 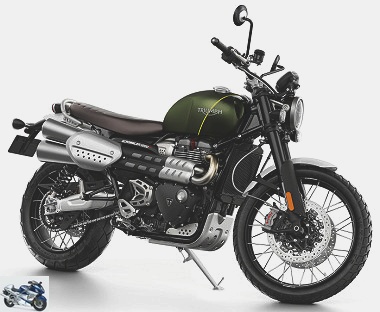 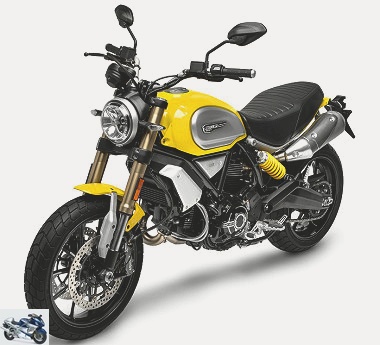 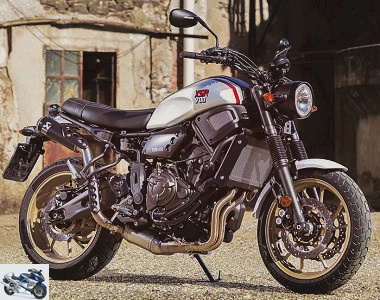 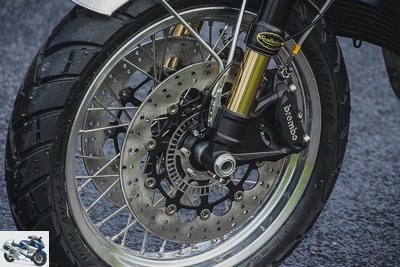 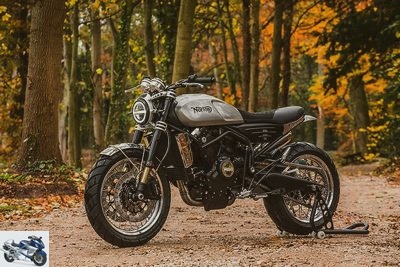 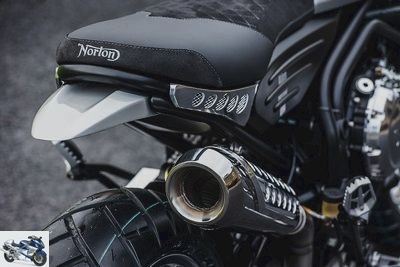 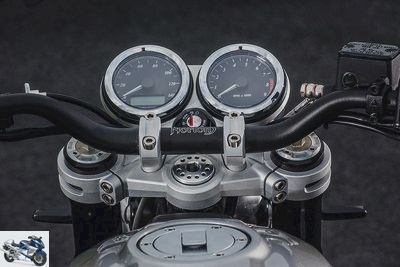 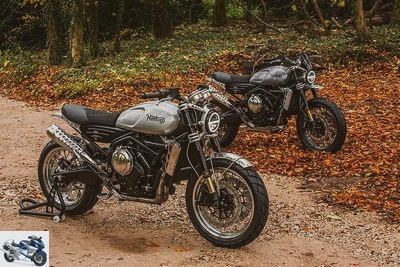 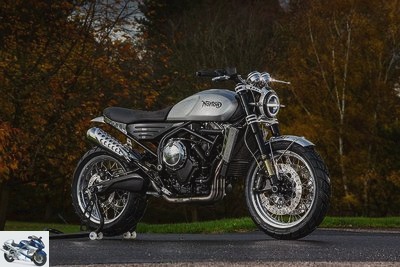 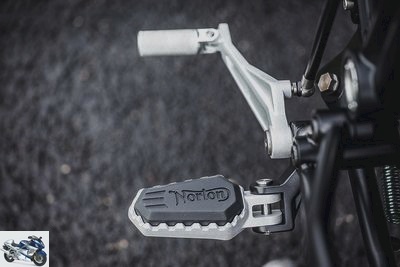 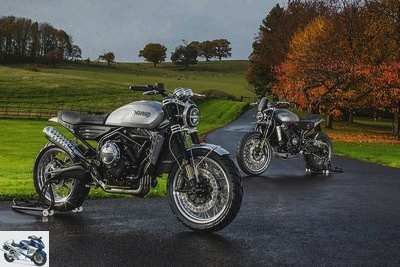 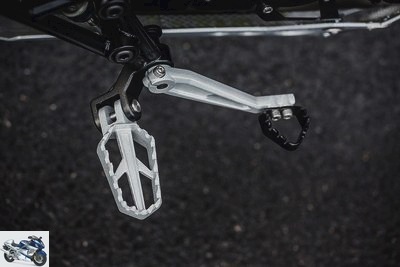 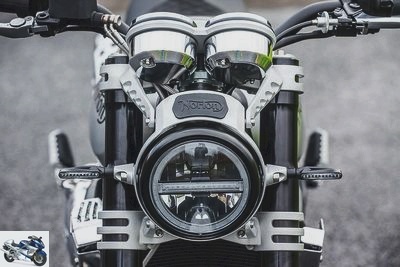 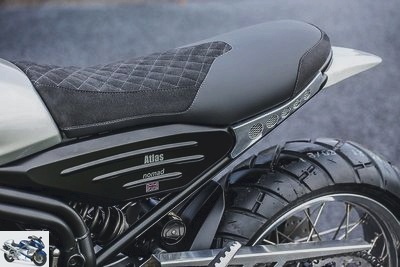 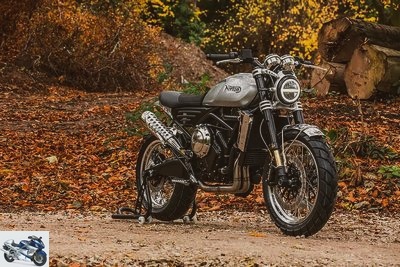 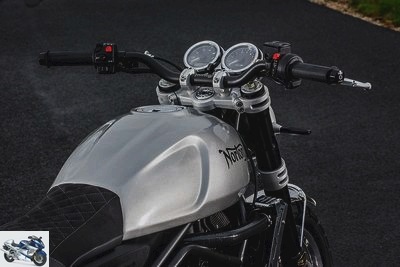