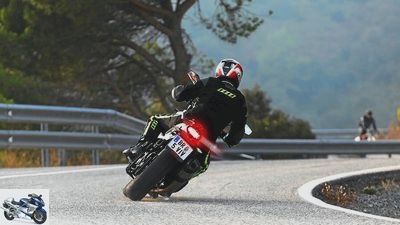 MSC cornering ABS in the test in the KTM 1190 Adventure

Confused terms are certainly the smallest problem with a startle braking in an inclined position. That is why Bosch, together with KTM, has developed an ABS that is suitable for banking on the 1190 Adventure.

It has been on the market since December 2013. A first test.

It was a lonely roundabout in the hilly hinterland of the northern Spanish city of Cambrils where this test began. With a generous radius, guardrails set back far and the road sloping towards the outside, it offered a good opportunity to convince some skeptical MOTORRAD testers of the functionality of the Motorcycle Stability Control (MSC). This name stands for the first ABS for motorcycles that can be used on lean angles. So the skeptics threw themselves on that KTM 1190 Adventure into the circular path, felt their way up to the grinding limit of the footrests and uprights, took a deep breath and pulled the handbrake lever with all their might.

The following remained unspectacular. the KTM nodded into the springs of her upside-down fork, decelerated, was straightened to the same extent as the speed decreased and came to a stop after a few meters from about 40 km / h. Sometimes a control process of the ABS was visible or audible through a rattle in the drive train, sometimes not. The steering reactions, especially a tendency of the front wheel to fold inwards, which was felt at the first moment of braking, could not be seen from the outside. Its cause, a locking of the front wheel, was literally eliminated by the intelligent brake force distribution and the modulation of the brake pressure. Again and again, photographer Markus Jahn “filmed” the process at twelve frames per second in the hope of catching the KTM with the front wheel clearly turned on a lean angle. 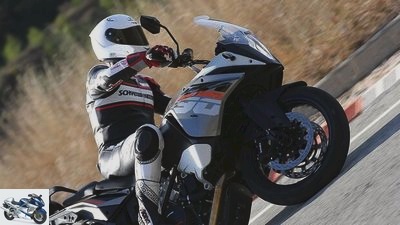 The shortened perspective of a telephoto lens suggests a lower angle than the actual tilt. In reality, the KTM is still around 40 degrees here, but the brakes are still fully pulled, the fork is compressed and the front tire is pressed flat. The road slopes outwards. No problem thanks to MSC.

It didn’t work because it couldn’t; Even in all subsequent attempts, sometimes at twice the starting speed, the system controlled so precisely and quickly that its work could only be made visible with a high-speed film camera.

This confirmed what was already evident when the MSC was presented: anyone who has come into an inclined position without falling can use it to brake fully on an even road surface. In the classic accident-prone situation of a panic braking in an inclined position, the MSC prevents the driver from falling. This also works under difficult conditions such as an outward sloping carriageway. It even worked when transitioning from dry to wet roads, although it must be added that the track was superbly paved and the wet areas offered almost as much grip as the dry ones. Unfortunately, a test site with a slippery circular path that could be irrigated was not available at the beginning of January.

Panic braking without an MSC leads to an immediate fall

So far so good. But what about the notorious righting moment when braking in an inclined position? How justified is the fear of many motorcyclists of having to leave the curve on a tangential line when braking in an inclined position and crashing into a crash barrier or a rock face? To clarify this question, the MOTORRAD testers marked out a narrow pylon lane in the Omega of the Calafat race track. Again, the car was fully braked in full banking, this time at a speed of around 70 km / h. In the course of dozens of braking operations to a standstill, none of the four testers had to leave the pylon lane. The KTM lined up with full deceleration, but because of the sharp drop in speed it was also necessary to reduce the lean angle so as not to tip inward. Unfortunately, this cannot be measured, only estimated, but compared to the line of uninterrupted cornering, the driver and motorcycle came to a stop about 75 centimeters to a maximum of one meter further out during the tests. This shows the advantage of the narrow front tire with a large diameter – it only produces a relatively low tendency to pitch. 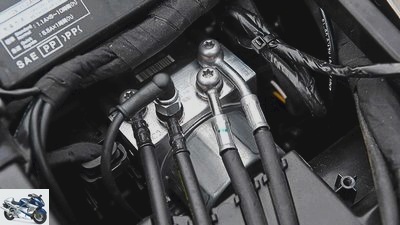 The pressure modulator of the two KTM. The other hardware components are also the same with and without the MSC. The software makes the difference.

If you have to brake so close to an obstacle in an emergency that the aforementioned 75 to 100 centimeters are not sufficient, you can first reduce speed with a short, courageous braking maneuver, then release the brake again and complete the curve on a narrower radius. Such maneuvers have to be practiced, but this is recommended when dealing with any ABS and the MSC anyway.

The test track in Calafat was also used by MOTORRAD for comparative measurements with an Adventure without MSC, but with ABS. By the way: the components of the braking system are the same for both; So MSC can buy any of them at the KTM dealer for 399 euros 1190 Adventure be played. First of all, this comparison showed that an experienced driver who planned to brake on a reliably non-slip track can come to a standstill without the MSC at least as well from a full incline as with. Traffic educators, KTM or Bosch employees won’t like reading this, but it’s true.

On the other hand, panic braking in an inclined position without the MSC would immediately lead to a fall. The testers simulated this situation by briefly pulling the handbrake lever with all their might. According to the data recording, this lasted for about 0.3 seconds, then it was high time to release the brake in order to set the front wheel, which had already slipped and collapsed, back into rotation and thus stabilized the motorcycle. Only three tenths of a second, brief but informative. The standard ABS built up the brake pressure almost brutally, and the shifting of the braking force to the rear was hardly noticeable. Because of the more severe deceleration and the stronger vehicle reactions, the tendency to pitch also seemed stronger in the first tenth of a second before the tire began to slip.


Cornering ABS MSC from Bosch in the test

Braking in an inclined position without falling? 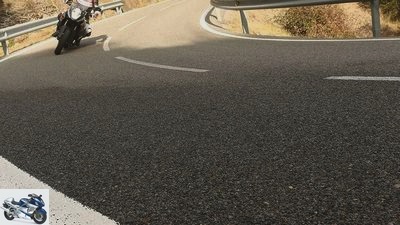 The MSC also mastered the aggravating situation of cornering braking with a transition from dry to wet road surface. However, it has to be stated that the surface still offered very good grip even in the wet passages. Unfortunately, a test site with an irrigated, slippery roundabout was not available.

The MSC’s strategy is to do what even an experienced driver can do in panic situations when he is prepared for his task. It builds up the brake pressure sensitively and nevertheless quickly, but by no means hastily. It brakes at the rear right from the start and uses both brakes to a standstill. It brings you to a standstill faster than briskly shooting over the limit, followed by a startled release of the brakes or even a fall.

The comparative measurements also revealed that an ABS of the control quality of the Bosch system in the KTM allows a lean angle of 35 degrees and less and less full deceleration, at least on a road with normal grip. The Nissin ABS of the Honda VFR 800 achieves similar values. In the case of a slight to moderate lean angle, you don’t need an MSC for emergency braking on these motorcycles. Like any good assistance system, it doesn’t take anything away from you if you have it.

A small downer remains: There is no display in the cockpit and no other reference to the MSC. You don’t necessarily have to be in the special situation of the MOTORRAD tester, with two motorcycles of the same type, of which no one knows exactly which one has the system on board, to find this situation a bit strange. After all, not all motorcycles are always driven by the same rider, and it is not always clear to everyone which machine is equipped with what. Acting discreetly in the background corresponds to the character of the MSC, but a short I-am-ready message when switching on the ignition would still be desirable. 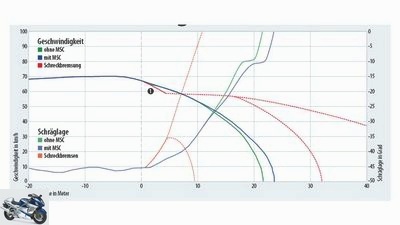 At first glance, it doesn’t seem easy to read this diagram. But not so difficult on the second either. The lower bundle of lines shows the lean angle, the upper one shows the speed when braking in a curve. Green shows braking without MSC, blue with. From an incline of around 30 degrees and less, the standard ABS of the KTM obviously allows higher deceleration values ​​than with MSC. This is due to the fact that the stability control for braking on slippery road surfaces leaves an even greater safety reserve. Attention: Braking on the green line is only possible if the driver is trained and prepared and the route has a good grip.

Not in the case of a real panic braking. The solid red line shows such a sudden emergency stop without MSC at an incline of around 45 degrees (1). Unfortunately, it can only last a few tenths of a second. Then there are two possibilities, which are illustrated with fictitious and therefore dashed red lines: Either the driver falls, then the speed slowly decreases and the lean angle quickly goes towards 90 degrees. Or he releases the brake, stabilizes the machine and then decelerates further. But he loses in the process
considerable time and braking distance.

Tips for braking on an incline without an MSC 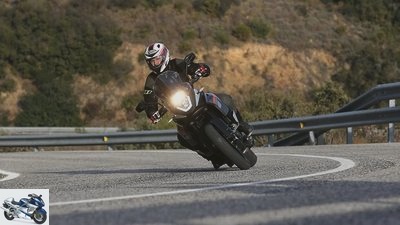 Here are the most important tips for braking in an inclined position without an MSC.