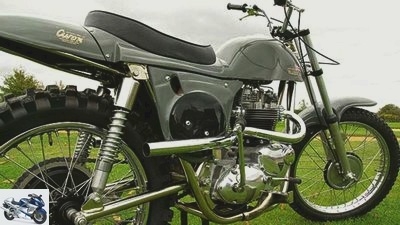 the rest is still waiting! Steve McQueen was not only a movie star, but also a racer and biker. His passion is rooted in his enthusiasm for a special bike.

Hollywood legend Steve McQueen owned an impressive fleet of vehicles? about 200 different motorcycles were owned by the famous American.

He was particularly taken with one of them: a slim off-road bike called the Desert Racer, powered by a Triumph TR6 parallel twin and built with a Metisse frame, which he had bought in 1966. McQueen was known for making excessive use of his motorcycles ?? so also this one, to the clear displeasure of his film producers. He competed in numerous grueling enduro races in California and other western US states, garnering top placements and a high level of recognition, not just from his own fan base.

An article in the American magazine "Popular Science", which appeared in November 1966, describes why he was so enthusiastic about this Metisse triumph. McQueen enthuses: “The motorcycle is years ahead of its time. It's a revolutionary bike that no longer needs an oil tank. The oil circulates through the tubes of the frame, which keeps it cool. That is important in tough racing. And the power ?? the machine is faster than the sound! ?? McQueen knew enough about the subject, he knew exactly what he was talking about: “I prefer the big four-stroke engines, especially in bikes as light as this. The fiberglass fenders and tank help keep the weight down, and the Ceriani fork gives you a casual ride. The BSA fork clamps are the most stable there are. This is really important for me, because I have hit some bumps or bumps so hard that I bent the handlebars! ?? This shows the commitment with which the actor competed in his races. Steve McQueen died in 1980 at the age of 50 of a heart attack after cancer surgery in Mexico. And his Metisse Desert Racer no longer exists either, at least nobody knows anything about its whereabouts. It was probably destroyed during one of the numerous missions. The fact that McQueen's favorite bike is now being reissued in a small series of 300 in England near Oxford is mainly thanks to one man: Sir Anthony Bamford, manufacturer of construction and industrial machines, motorsport enthusiast, non-motorcyclist, but an ardent admirer of the American actor he met at car races.

A piece of personality 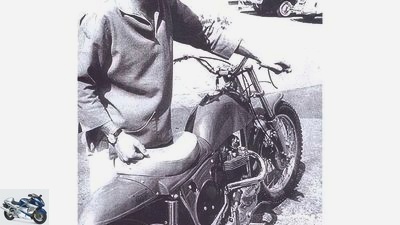 McQueen owned 200 bikes, the Mètisse was his favorite.

About three years ago, Bamford got Gerry Lisi of Metisse / Rickman to build a replica of the exact machine Steve McQueen bought in 1966. This faithful copy was soon to be found in Sir Bamford's London sales rooms, and within a few months the Metisse / Rickman company could hardly save itself from buying inquiries. Since McQueen's son Chad is also an enthusiastic motor sportsman, he quickly became enthusiastic about the small-series project. And so the signature of the famous father is now emblazoned on all replicas. The greatest difficulty in realizing the 300 Desert Racer was to get the original Triumph TR6 two-cylinder in sufficient numbers.

The rear hub from BSA is also an old original part, which engine builder Bill Thompson from Cheshire helped to acquire and, with his five scouts, raised the rare parts in sufficient numbers in the USA and Canada. Thompson also undertook the complete overhaul of the robust, 650 cubic centimeter tall, characterful twins with a 360 degree crank pin offset. All other parts were produced from scratch. Gerry Lisi had the light but very stable scrambler frame brazed from high-strength Reynolds tubing in the best Metisse / Rickman tradition (Metisse was a brand of the famous English frame building brothers Rickman). Then the pipe works got a protective and noble shiny nickel coating. Like the original, the 35 millimeter thick telescopic fork comes from Ceriani and has 190 millimeters of spring travel. The BSA fork clamp, the seven-inch Triumph drum brake, the Hagon struts and the Avon plastic parts are true-to-original copies of the McQueen scrambler at the time. The only concession to modernity is the contactless CDI ignition, as used by Triumph on the machines of the 1970s. The vintage crosser is assembled in the almost 400 square meter Metisse factory hall on the grounds of an elegant English country club. 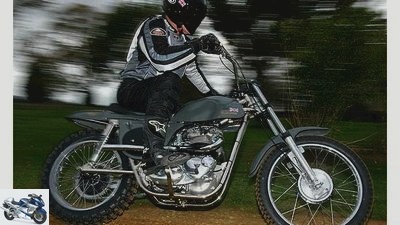 You can still feel today that this motorcycle was ahead of its time. Only the start procedure assumes this. Since there is no cold start enrichment, the centrally mounted Amal carburetor must first be well flooded with fuel before the engine comes to life with two or three kicks on the kick starter. What escapes from the gracefully curved, short and silencerless exhaust pipes will wake up even the sleepiest country club? a sonorous, spicy trademark. The dry off-roader, which weighs 135 kilograms, pushes forward with full torque, the easily shiftable four-speed gearbox does not have to be overburdened. It is astonishing how smoothly the twin runs, since it completely lacks the achievements of modern times such as balance shafts. For a parallel twin bike, the replica shows sensitive handling, which makes handling it much easier, even under adverse conditions. Steve McQueen would still enjoy the bike, which is why he would surely agree with his son Chad's decision to have this bike bear his signature. 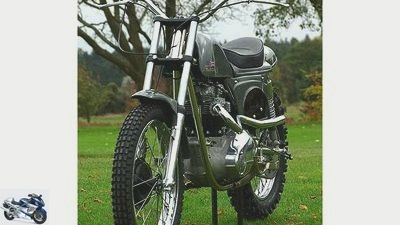