Between 1966 and 1972, the mecanica Verghera (MV) won six world titles with three cylinders 350 and 500. It is to celebrate them that the Italian brand is now marketing the 675 F3. Meeting with a somewhat capricious star…

Breathtakingly beautiful, both literally and figuratively, as it is thin, the MV stands out as much for its shapes as not for its technology.. Its "mini F4" style inspired by the master Tamburini gives it an incredible grace. Sensual at will, the F3 is a bit like a pretty girl who moves you at first sight. 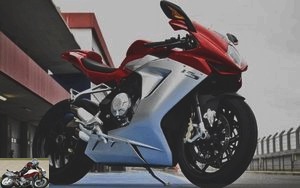 Discovery (or rather meeting)

Once you have passed your heart, provoked by its sculptural forms, we focus on the details that make up its personality. Its undersides suggest wonders, which the black does not highlight as well as the gold of the “Oro” version. But all the same, the superb trellis frame connected to beautiful molded plates, the magnificent single-sided arm, the elegance of the rims, every detail counts and frankly, we never tire of scrutinizing the beast, as it is beautiful (and not the contrary). 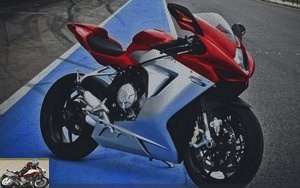 In this magnificent case, nestles a three cylinders, no what am I saying, a three pistons (it’s written on it!) Incredibly compact.

It claims 80 mm less width than its famous competitor from across the Atlantic! Coming second in this segment MV spared no effort in concocting exceptional mechanics. Judge instead: titanium valves, forged pistons, double injector per cylinder and ultra short stroke (79 X 45.9) against (74 X 52.3) initially for the Triumph 675, increased to (76 X 49.6) on the last version to grab 3 additional horses. It must be said that the MV making flow as much ink as saliva, the English decided to review their copy in 2013. 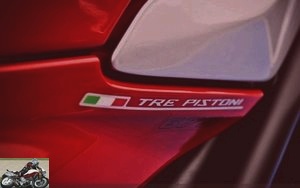 Result the Triumph announces today 128 ch at 12,500 rpm, while the MV in “spits”, the term is adapted, 126 to 14,400, or almost 2000 rpm later. However, for the maximum torque, it is the opposite: 7.24 mkg at 10,600 rpm for the MV, against 7.5 mkg at 11,900 rpm for Triumph. Beyond the numbers, it is of course the appearance of the torque and power curves that counts. We will talk about it again in use. But that’s not all ! For good measure, MV took over the concept of counter-rotating crankshaft, dear to the Yamaha M1s of Valentino Rossi and Jorge Lorenzo. Using the balance shaft as an intermediate shaft, MV turns the crankshaft in the opposite direction to the wheels, with the aim of reducing, by reciprocal compensation, the gyroscopic effect. Thus the motorcycle becomes more manageable. Finally, the Italian manufacturer has equipped its beautiful with sophisticated electronics, hoping to make the most of the engine and the chassis. It starts with a "wireless" accelerator, then it continues with 4 adjustable maps and ends with an 8-stage traction control! As an option, you can have an inclination sensor to better manage the assistance, a starting aid, an anti wheeling and a shifter. In short, the total. An extremely rare fact on a supersport, 600 or 675 therefore, which also knows how to remain reasonable in price. The icing on the cake is the cassette gearbox and its original selection system, with the forks positioned and articulated directly around the barrel..

What surprises at first glance is the size of the machine. This 675 is really small and for those under 1.70 m, it is a treat to get on board. Fortunately the older ones will find their place there too, even if obviously they will no longer feel the impression of having nothing between their legs. The riding position is very sporty, with very high (non-adjustable) footrests, but the saddle is lower than on the Triumph. On board, we feel good, we form one body, totally embedded in the motorcycle. The featherweight is immediately felt as soon as you move the bike. It almost feels like a 250! The full-featured dashboard captures the eye … and even the attention to decipher it! Ouch, it’s hardly readable. Particularly the rev counter, in bargraph mode, but also the speed indication, which is too low. Too bad because it has a chrono, a shiftlight, a gear indicator engaged and a remote control on the handlebars. With the left stalk, we manage the traction control. On the right, it is the starter button which is used to select the mapping. There is no gauge, but a reserve witness. 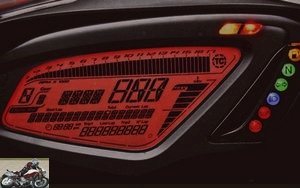 The time for takeoff has finally come. The three short tailpipes make their vocalizations heard. The sound is hoarse, rough, metallic. With its short stroke, the motor has little inertia. He climbs very quickly in the towers with each gas stroke. Surprising for a three-cylinder. It looks very promising. 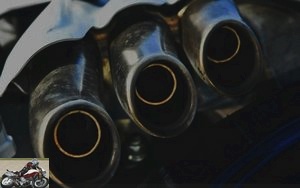 The passage of the first, like the clutch, does not call for any particular comment. Obviously, the selection has been improved compared to the first test machines. One could indeed fear that the system of selection, where the barrel acts as axis of forks, is naturally hard. But here, with speed boots, no real problem to report. On the other hand, the shifter seems "nervous". No sooner has you touched the selector than the ignition cuts out, causing unexpected jerks. It is therefore advisable to be vigilant and not to bring your foot too close, as soon as you have not decided to change gear..

During the first laps of the circuit, we are lost. Indeed, the mechanics, both noisy and "sensational" will fill your ears. We have the impression of always being at very high speed, failing to navigate the tachometer as a bonus. When you’re used to the Triumph 675, it’s a different world. The Englishwoman seems almost placid! But when it comes to turning the handle, too, things change. If the graceful subject of his majesty responds present from low revs, on the MV, it is hollow, much hollow. Thus at 6000 rpm, the Triumph already has 50 good horsepower, while the MV has just 40. An additional 25% in favor of Triumph, which is felt all the more than with the ambient metallic noise. , we would gladly tend to stay in low revs. But it is quite the opposite that it is necessary, because this three cylinders hyper-square has everything of a 4 legs! For comparison, the round and easy 600 GSXR already develops 45 hp at 6000 rpm! And if past 10,000 rpm, the MV spits its venom, it delivers its maximum power at the same speed as a Yamaha R6 (14,400 rpm), i.e. 1,000 rpm after the 600 GSXR and 2,000 after the old Triumph version. Moreover, its times are of the level of a 600 Kawasaki, very worked for the couple it is true, but without comparison with "the 675". On the other hand, those who blame its lack of English extension (which won 500 laps in 2013) will appreciate the howls of the MV! Of the pili-pili spicy sauce certainly that this engine, which does not miss any flavor besides! 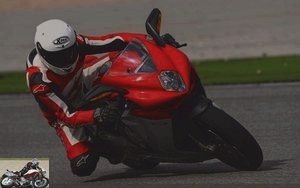 Electronic support, for better … and for worse

But it’s not just the hollow and furious engine that surprises, there’s also the electronics. Indeed, it is very difficult to measure the power on the gas net. It is better and more natural in the N mode than in S, but all the same, not very "natural". With all that, at the beginning, we do not know where we are with the speed and the load (opening of the throttle). In short, one wonders how the bike will react and if we are not enough in the laps, we come out of the corners “like an anvil”. Without having had time to try the "custom" mode, which allows personalized programming of the throttle, we regret a good old cable control, very natural, as on the Triumph, or even the 1000 GSXR, another reference of ease, little equipped with electronics. Sometimes it quivers and you wonder if you are at the switch, if you have touched the selector or if it is simply the accelerator that is doing its own. A hardly comfortable situation when one seeks the limits. Too bad, because over the turns we gradually assimilate the user manual and we no longer use the engine in its ideal operating range. We then discover a precise and rigid frame, a very manoeuvrable machine, stable on its trajectory, in small corners, as in large curves. The front is extremely sharp. The counter-rotating crankshaft seems to keep its promises. A real treat ! Obviously the Michelin Power Supersport on our test bike suited him very well. Remember that the original equipment is Pireli Diablo Rosso, which is probably also suitable for the F3. Finally, it should be noted that the position is very pleasant on the track and that you move very easily on the bike. 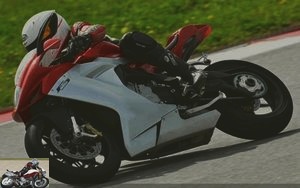 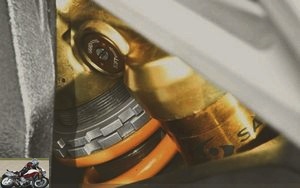 This is another subject of satisfaction that gives us the cycle part. This Brembo set is really of the best level. Powerful, dosable with two fingers, it has just the right bite, without being aggressive. You can enter hard in a curve, the bike does not stand up on the brakes. This front end is really perfect. The rear brake does not call for any particular comment on this kind of motorcycle. He does his job. 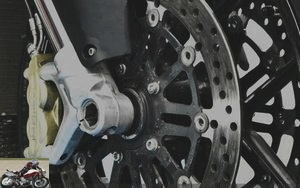 We were only able to use the Diva on the track. However, this nickname reflects his personality well. With it, everyday life will be more nuanced. Without minimizing the pleasure of waking up with such a gem in your garage, it will take a driving position hardly suited to the city and no more to the road. The fault is mainly due to its very high footrests. You will have the neck broken to look far ahead, because here the reference position is rather the dab to look for the last kilometer hour, the nose in the bubble. After a few tens of kilometers, or minutes in town, the vocalizations of the mechanics may become tiring in the long run. Finally you will have to deal with a hollow engine like that of a Yamaha R6, forcing you to go down 2, or even 3, gears for an express overtaking. In short, your daily life will not be easy. But it is the price of glory. It is likely that Brad Pitt’s life with Angelina Jolie is not as rosy as it is in the movies. But the candidates for the "takeover" are very numerous. You too with your F3 will be envious, even if you secretly have the right to dream of a scooter when you face traffic jams, like a toad on a matchbox.

Sold at a very competitive price, this F3 seduces, captivates, but also disappoints in certain aspects. Those who saw her bury the 675 Triumph will get their money’s worth. In chrono the English series fly the MV and all the competition elsewhere, setting the bar very high. However, the F3 is certainly well born, very well born even, as evidenced by its first results in the race. They demonstrate and confirm that both the chassis and the engine are of excellent craftsmanship. Related to electronics, behavioral problems are simply about the tune-up. The advantage with IT is that it is a simple update. In fact, those who would like to afford an F3 should not be put off by these little flaws which will be resolved soon at the dealership. The factory, aware of this, is doing everything in its power to make it easy for dealers to do in-store. Sold for € 12,500, the MV 675 F3 is an exceptional, prestigious motorcycle, a future collector, well worth a detour. Keep an eye on his next outings on the track, you will be pleasantly surprised: Roberto Rolfo was fourth in the first round of the world supersport for a long time before having to retire, his tires having betrayed him. He finished 9th in the second round on the very fast Aragon track. An exceptional place, facing models that already have many years of racing experience. As the saying goes, damn it can’t lie ….

The technical sheet of the MV Agusta F3 675

Test conditions: on the track at Magny-Cours