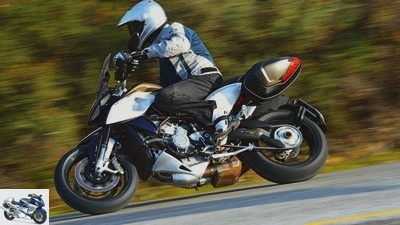 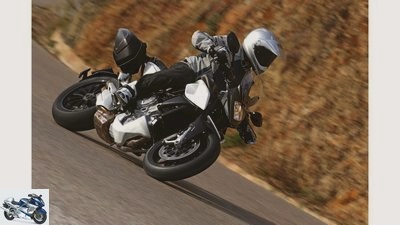 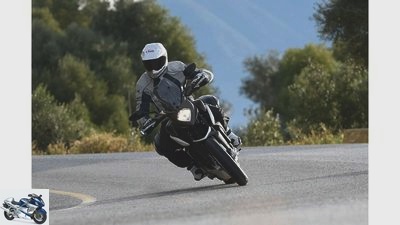 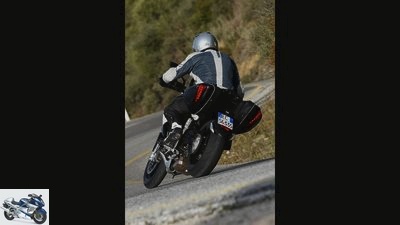 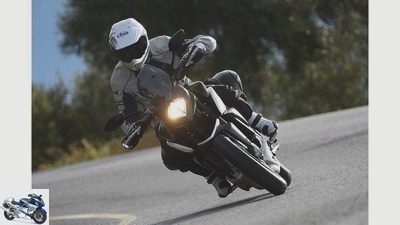 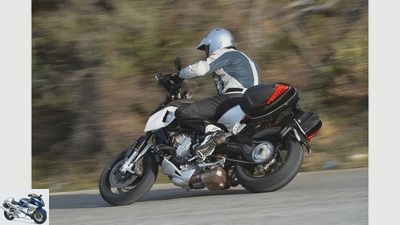 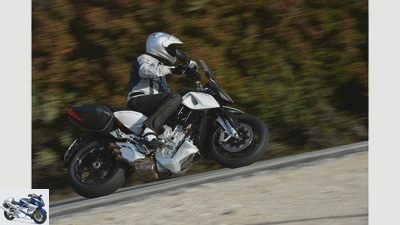 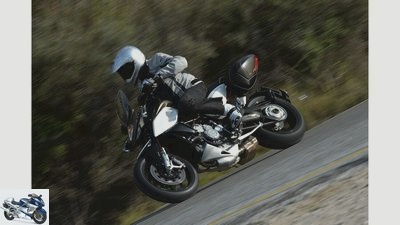 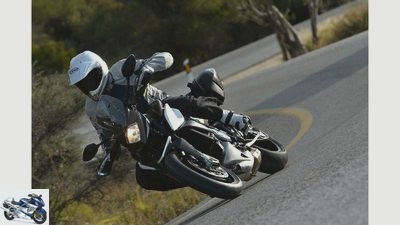 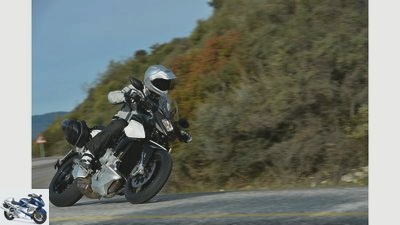 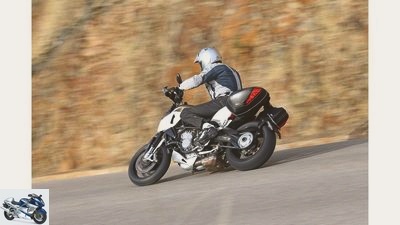 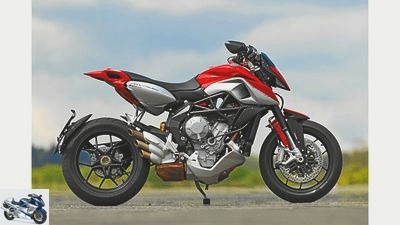 11/22
Rivale 800: The Funbike: Major changes to the frame geometry and the plastic parts are features of the Supermoto fun device, the Brutale engine remained unchanged. 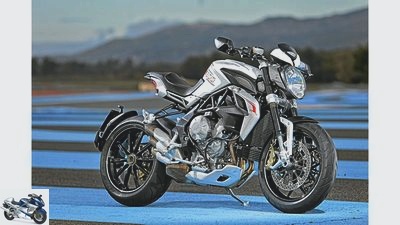 12/22
Dragster 800: The Spurtler: The Dragster is largely identical to the Brutale, with a stubby tail and number plate holder on the swingarm that distinguishes it visually. 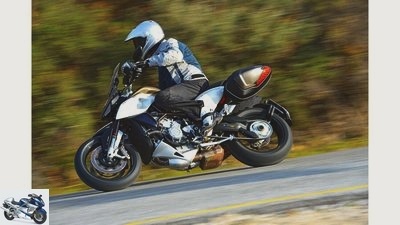 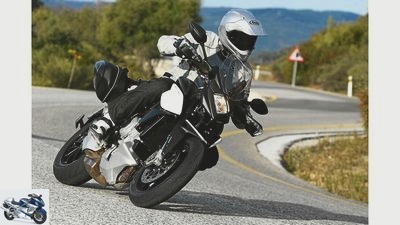 14/22
Brenn-Stoff: The Stradale delivers a high level of entertainment on winding roads, but, like all MV three-cylinder engines, requires an active driving style with a lot of physical effort. 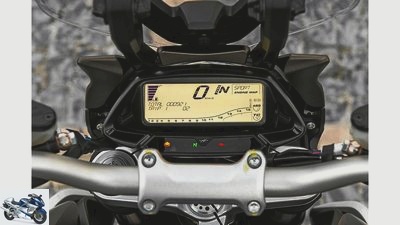 15/22
Compression diagram: heavily compressed flood of advertisements in the new display, at least easy to see in the sun. 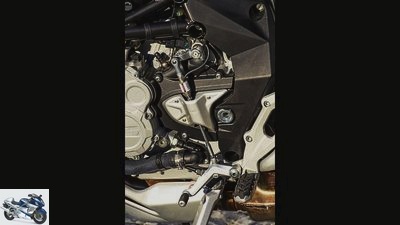 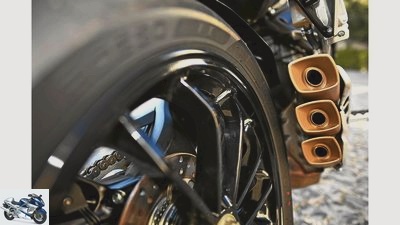 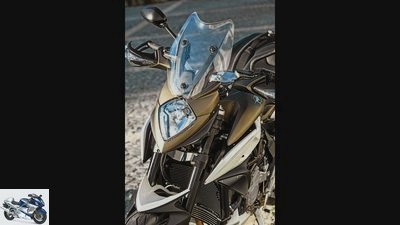 18/22
Wind deflector: The narrow disc can be swiveled up five centimeters, but with fiddly knurled nuts. 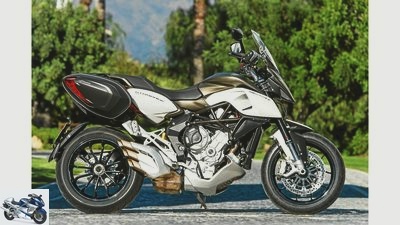 19/22
Bau-Werk: The Stradale is based on the Rivale, small suitcases and the higher disc should make the fun bike an all-rounder. 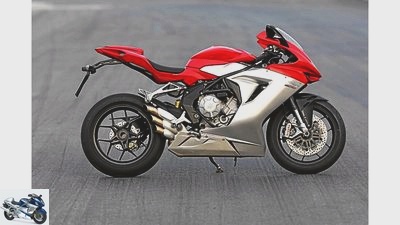 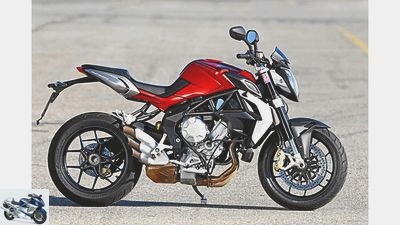 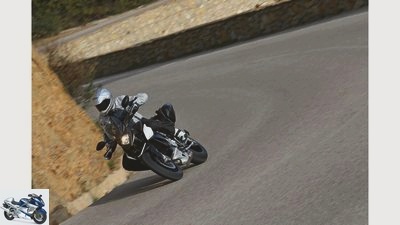 With the MV Agusta Stradale 800, the Italian motorcycle manufacturer wants to take a cautious first step into the tourist segment. If it ignites only a short flash in the pan or it can keep the flame burning permanently?

An engine, a motorcycle – that is practically nonexistent these days. The magic word is modular system. And so has MV Agusta Based on the fiery three-cylinder presented at the end of 2011, a whole 800 family gathered in just three years. Whether disguised as a super athlete or stripped as a naked bike, whether as a cheaper basic machine or an exclusive RR variant: all of them are sparkling sports machines with a fairly radical expression. The latest addition is the MV Agusta Stradale 800, which is intended to open up new target groups in the tourism segment to the MV portfolio. Can an Arab become a carriage horse? Here are the first answers to burning questions.

Not at first glance, it looks more like a rival with a window pane and suitcases. In fact that is based MV Agusta Stradale 800 on this (test in MOTORRAD 1/2014), but there was a lot of tinkering and filing. Here are some excerpts from the catalog of measures: Frame with a degree flatter steering head angle, swing arm extended by 30 mm, wheelbase increased by 46 mm, rear 20 mm more spring travel, tank capacity increased from 13 to 16 liters, newly shaped seat.

There were other changes to the engine, but 93 percent of the parts remained unchanged. The peak power was reduced by ten to 115 hp (in sport mode) or 90 hp (normal and rain mode) in favor of a better torque curve, and the maximum speed was cut by 1000 revolutions. For the first time on the three-cylinder, which incidentally only weighs 52 kg, the clutch is operated hydraulically. Also new is the silencer on the MV Agusta Stradale 800, which with 2.8 liters more volume was already designed for the Euro 4 standard. The electronics package from the Italian supplier Eldor was again upgraded. Their Nemo EM2.0 engine control combines ride-by-wire, ignition, engine mappings, traction control and shift assistant. The latter also works as a blibber, so it allows downshifting without the clutch. In custom mode, the driver can configure power, throttle response, rev limiter, engine drag torque and traction control himself.

Good things need to be in a hurry

Is the concept novel?

No, two years ago Ducati created the Hyperstrada, an almost identically designed offshoot of a fun bike. Here, too, the idea: to broaden the area of ​​application without reducing driving fun and watering down the basic focus. In addition to the modifications mentioned, the main focus of the touristic direction is represented by the 50 mm height-adjustable window and the standard, integrated softbags. Since these cover the flanged rear lights on the side, the MV Agusta Stradale 800 additional lights integrated in the case. An original idea that, especially in the dark, in combination with the turn signals at the bottom of the license plate holder, ensures a very special illumination.

Is the Stradale as compact as its sisters?

In any case, the lengthening measures on the chassis do not change that. On the contrary, there is even less space for the driving staff, because the molded seat does not allow any freedom of movement and the handlebars, which are raised with long risers, extend even more towards the driver. Long people find it difficult to stow their bones on the MV Agusta Stradale 800, especially since their knees also bruise on the edge of the frame cladding. But there are colleagues with a smaller body size who like this compact sitting position.

The effort to get calm in the framework is definitely to be noted. As manoeuvrable as the touring fun bike is on tight bends, straight-line stability at high speeds on the motorway remains surprisingly stable, as far as it was possible to test it on Spanish motorways around Marbella. The rival offshoot tends to remain, however, that is in his blood, the agile speedster. And one who makes demands. Because nothing works on its own, the driver always has to play along and really has to work hard to get driving fun. This is especially true on uneven, bumpy slopes. Every bump tries successfully to bring the MV Agusta Stradale 800 off course. It takes time for trust to build up between man (or woman) and machine.

No. Ten horsepower and 1000 revs less change the angry character of the Italo triple hardly anything. The 800 still loves the fast sprint through the wide rev range, less the lazy shifting around. It hisses a little less loudly from the now angular tailpipes, but it still clicks into the limiter with enthusiasm. At the bottom, the drive of the MV Agusta Stradale 800 is already developing solid thrust, then increases noticeably in the middle and pushes forward so vehemently at the top that every now and then the front wheel hovers a few centimeters above the ground. Switching is pure joy with such a characteristic. Especially since it works great: up or down, both work smoothly and precisely in every load condition without a clutch.

Is the tiresome MV subject of engine tuning done?

Yes, definitely. The times when MVs were annoying in everyday life and on tours with angular, delayed throttle response are a thing of the past. Even in sport mode, the MV Agusta Stradale 800 hangs aggressively, but easily dosed on the gas. In normal mode it responds almost gently to gas commands, finely controllable. There is no longer any trace of the hiccups from previous MV triples. Later tests will show whether this was bought at the price of high gasoline consumption. The suspicion is obvious, that was the case with the rival.

In any case. The fact that it is already prepared for the Euro 4 limit values ​​with an enlarged exhaust volume does not detract from the rough character. The MV Agusta Stradale 800 certainly delivers a little less acoustic spectacle, but the typical MV feeling remains. And not only for the ear, there is also a lot for the eye. Beautiful details in every nook and cranny, wonderful.

Does the chassis have the tough tuning of the MV athletes?

Not quite. More suspension travel generally means more comfort. The Marzocchi fork and Sachs shock absorber of the MV Agusta Stradale 800 are of course fully adjustable and respond cleanly, only on rough ground occasionally comes into play with a bit of hardness from behind.

What about the tourist qualities?

Moderate. There is primarily a lack of space for this. So space for driver and passenger, storage space for luggage. Not much goes into the cute softbags, not a helmet anyway. The comfort is limited, the equipment for a tourer sparse. Even a simple on-board socket is missing on the MV Agusta Stradale 800, not to mention integrated navigation solutions. The wind protection is of course also limited. The disc can be adjusted by 50 mm, but it is simply too small. And the driver has it right under his nose. You can’t duck behind it at all, rather hit the upper edge with the visor.

Who should buy the MV Agusta Stradale 800?

The MV Agusta Stradale 800 is certainly not mass-compatible. It is a sharply tailored device for aesthetes, for connoisseurs and for people who are looking for a challenge. A knockout criterion is surely the height, because only a test sitting helps. The requirements with regard to driving characteristics are similarly selective. Anyone looking for a problem-free, easy-to-drive vehicle is wrong. And finally, you still have to be on the high edge: Almost 14,000 euros are a lot of wood for an 800. Quality and exclusivity have their price.

The 800 series of the MV modular system

MV Agusta F3 800
The super sports car: Derived from the 675-F3, the three-cylinder, which incidentally rotates backwards in all models, has a nominal 148 hp at its peak.

MV Agusta Dragster 800
The Spurtler: The dragster is largely identical to the Brutale, stubby tail and license plate holder on the swing arm distinguish them optically.

MV Agusta rival 800
The Funbike: Major changes to the frame geometry and the plastic parts are features of the Supermoto fun device, the Brutale engine remained unchanged.