Neo-retro in the right tempo

Concept bike adapted in an ultra exclusive limited series, the Superveloce 800 has finally been entitled to its standard version in series. But while its price has been reduced by nearly a third, has the MV Agusta been able to retain what made its appeal and its specificities? ? Is she just an F3 dressed up in classic inspiration? Or on the contrary is it as efficient as it is charming? Test… 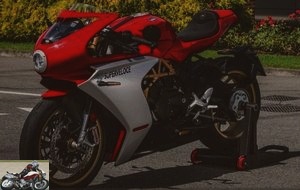 The arrival of MV Agusta under 100% Russian ownership, after the Sardarov family completed their acquisition last year, was marked by the arrival of two new models designed by the brand’s former owner, Giovanni Castiglioni. There is no doubt that the most anticipated model is the alluring Superveloce 800, a unique blend of old and new, retro and avant-garde, classic and modern. It’s a grand finale for its creator Adrian Morton who spent 16 years as design director for MV Agusta. In a career spanning the last three changes of ownership, from the Castiglioni family to Harley-Davidson, then back to the Castiglioni and now the Sardarovs, Morton has always kept the company at the forefront of design innovation. and the Superveloce is presented both as a farewell gift and a model for posterity.

Based on the F3 800 supersport platform, the Superveloce was presented for the first time as a concept at the Milan show in November 2018. It was then voted the most beautiful motorcycle of the show by more than 16,000 visitors against the others. novelties like the Ducati Panigale V4 R, the BMW S 1000 RR or the Aprilia RSV4 1100 Factory. MV Agusta was then invited to exhibit the bike in May at the prestigious Concorso d’Eleganza in Villa d’Este where it won the first Concept Bike prize. That same weekend, MV opened its order book online to allow customers to reserve the 300 copies of the Serie Oro limited edition, at a price of 27,990 euros in the unique red and silver livery..

According to the American director of R&D Biran Gillen, all the copies are then sold in six days. Production of the Serie Oro, nearly indistinguishable from the award-winning concept model the year before, began in February 2020, but was slowed by the ten-week shutdown due to the health crisis and has just ended. . But at the 2019 EICMA show, MV Agusta also unveiled a production version with an equally attractive look and sold 20,300 euros VAT included with a three-year unlimited mileage warranty. Available in MV’s traditional "racing" colors (red and silver, as well as black and gray, production has now started). 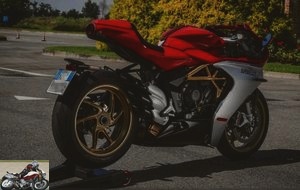 By reducing the price of the Serie Oro by a quarter, MV has sacrificed some of the more obvious bling-bling elements on the bike, without this impacting the lines of the model, with the slightly convex sides of its fairing devoid of visible screws giving the impression that the Superveloce is ready to leap forward. This feeling is accentuated by the long, finely drawn nose which culminates in a round and domed headlight which, like the rear light located in the slender rear part topped by a small pad for the passenger, is LED. The license plate has been lowered along the wheel so as not to mar this light rear. In addition, there is a small spoiler at the front of the screen which seems curious at first glance, but which does not impact visibility when lying behind it.. 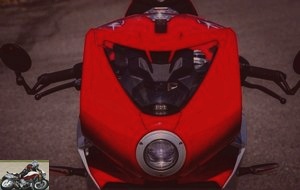 The fuselage of the Superveloce gives it a real visual identity

The casing is now made of fine plastic rather than carbon fibers as on the Serie Oro which only adds an extra weight of 1.5 kg for this bike which retains a dry weight of 173 kg, exactly. like the F3. The single-sided swingarm in cast aluminum is painted in bronze on the Oro, in black on the standard. The Oro’s retro-styled E-motion spoked wheels are here replaced by more conventional 6-spoke aluminum rims taken from the F3. 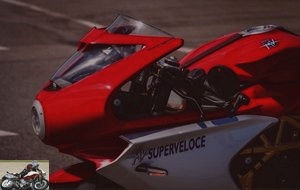 The Oro’s triple SC Project exhaust also leaves room for a 3-1-3 line with the famous silencer designed by Morton. However, this does not impact the performance of the three-cylinder engine which remains identical to that of the F3 800 with a power of 148 horsepower available at 13,000 rpm for a maximum torque of 88 Nm at 10,600 rpm. Engine components remain the same except for the modified valve timing while the Eldor ECU has been remapped to deliver sharper acceleration and more torque at mid-range, in line with the lowered 4-tooth final transmission ratio on the rear sprocket. 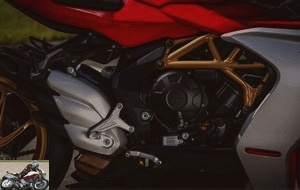 The Superveloce is fitted with a 43mm Marzocchi inverted fork open at 24.5 ° with 99mm drag and 125mm of travel. It is associated with a Sachs shock absorber offering a travel of 123 mm. The suspension is fully adjustable at the front and adjustable for compression, rebound and spring preload at the rear. 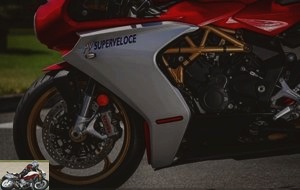 Braking is provided at the front by two Brembo 320mm discs bitten by Brembo 4-piston monobloc calipers and actuated by a Nissin radial master cylinder. At the rear, we find the same 220mm disc and two-piston Brembo caliper as on all three-cylinder MVs. The aluminum rims are here fitted with Pirelli Diablo Rosso Corsa II tires in 120/70 at the front and 180/55 at the rear. 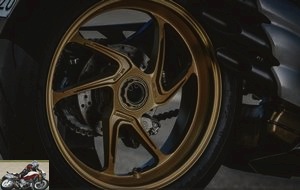 17 "aluminum rims are painted in bronze

I had the chance to drive one of the first Superveloce to roll off the production lines on a hot summer day (36 ° C!) On Italian roads. Here is the opportunity to answer the most important question: Is the Superveloce just for show off or is it as fun to drive as it is beautiful to watch? ? 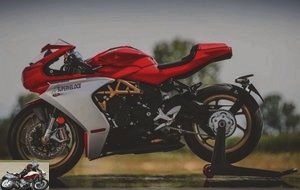 The bike is fitted with a second generation 5 inch TFT color instrument panel with a specific display derived from the element used on the Brutale 1000 Serie Oro. The menu is accessible via a multifunction joystick on the left stalk. The device manages incoming calls, messages and music through a Bluetooth connection for smartphones. Navigation can be accessed through the MV Ride application which also provides access to data relating to motorcycle use and routes. All the electronic parameters of the Superveloce can be modified from the application, such as engine modes, traction control … On the other hand, the Serie Oro tracking function is no longer part of the game.. 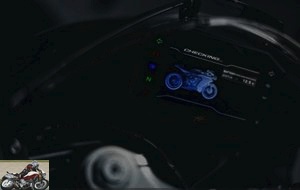 Climbing aboard the Superveloce immediately reveals a driving position that is subtly more welcoming, if not comfortable, than the track-oriented position of the F3. The handlebars have been raised 18mm and moved back 6mm to the rear. The saddle is also lower, the rear section having been lowered by 15 mm to make the rider feel more seated "in" the bike. These little things mean a lot, as there is less weight on the wrists and shoulders compared to the F3, making the Superveloce a motorcycle suitable for everyday use, less drastic than the F3 designed for the circuit.. 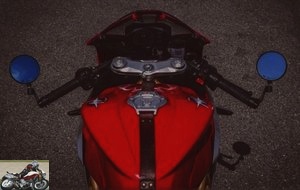 The driving position is still sporty, but less radical than on the F3

This is also explained by the new mapping which makes the Superveloce more accessible, even softer, in the way it delivers its performance. Although the two-way powershifter works great, although it is not as sensitive as some, it is not necessary to use the gearbox as much as on the F3. The Superveloce drives very well from 5,000 rpm. At low speeds, however, there is some heat on the left side of the bike, although given the ambient 36 ° C, this is not necessarily a problem with this particular bike…. 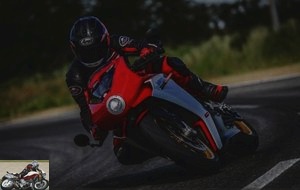 The engine is quite flexible and picks up from 5,000 rpm

But run the engine to the sound of this iconic exhaust and the Superveloce pulls hard from 7,000 rpm. We then have 72 Nm of torque. Halfway through maximum speed, we are therefore already at the top of the torque curve. It’s a delicious yet smooth motor that lifts the front wheel easily, however, especially if you shift gears around 11,000 rpm, which brings you right back to the middle of the torque curve when you opens the throttle on the upper gear. It’s really tough for a mid-displacement three-cylinder. The result here is significantly improved performance and enjoyment over the already impressive F3, backed up by a deep melodic soundtrack enhanced by intake noise. It offers truly impressive acceleration, but also better precision when the throttle is partially open. Another point that contributes to making it so pleasant to drive. 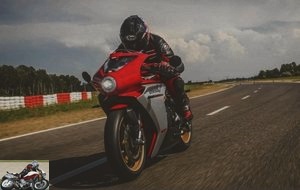 MV has prepared a customizable, track-focused Custom Riding Mode. But I don’t like it because it is both abrupt on the throttle opening and more violent on the engine brake. Race mode is what it promises: even more direct to the throttle response, which actually promotes understeer and forces me to continually correct my line out of a corner. It is ultimately the Sport mode which is ideal, making it possible to take advantage of the frame’s appetite derived from the F3 for turns and curves where the bike remains completely on its trajectory while the Marzocchi fork devours the defects of the asphalt with aplomb. 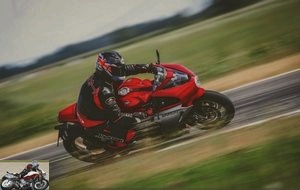 The Superveloce is a motorcycle that rewards clean and precise driving. It doesn’t require you to hang on to get your knee to the ground or use the Brembo brakes and the torquey engine to accelerate hard between turns. She likes to be one with her and to use her body weight subtly to change direction, aided by the precision of the composite frame. I hate to say it, but although it’s not a Norton Manx, the Superveloce is a bike that rewards more traditional riding, it’s all the more relaxing and rewarding to ride on it.. 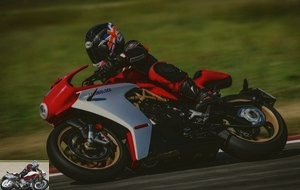 With its thin, but grippy Pirelli 180 rear tire and relatively nimble steering geometry, the Superveloce is eager to shift from angle to angle in the series of turns tackled in third gear. The whole is very agile. Using Sport mode with reduced engine braking and smoother throttle response helps maintain a good pace in the faster corners, where the bike truly lives up to its name, while maintaining the trajectory. that I had chosen for her. She really inspires confidence. 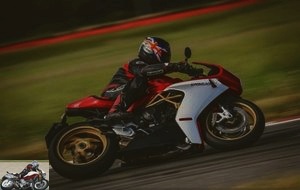 The rear suspension has been subtly revised to provide a smoother initial response in the first part of travel. And it does its job perfectly when you pick up the accelerator always on the corner and pass over a bumpy road. In spite of everything, comfort remains relative, the Superveloce remaining a sports bike. But the ride quality is excellent in every way, not just considering the nature of the beast.. 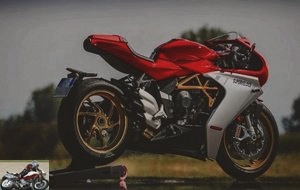 Associated with the single-sided swingarm, the rear shock absorber perfectly fulfills its role

The excellence of the controllable and super efficient Brembo brake package has repeatedly saved me from getting too carried away by my momentum without the ABS being felt. 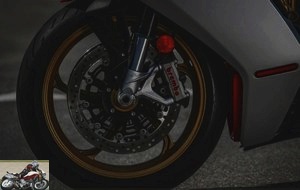 Braking is provided at the front by a 320 mm disc and a 4-piston Brembo radial caliper.

MV Agusta’s slogan is "Motorcycle Art". The Superveloce 800 embodies this motto. While living up to its name and looks, it is also fun and rewarding to ride. It’s a smart motorcycle, both stylistically and dynamically. It is very unlikely that anyone who buys it will be disappointed with the experience of riding. Lucky guys… 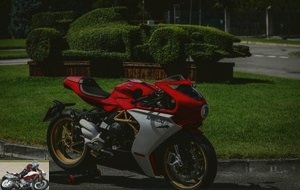 Definitely, the Superveloce is aptly named

The technical sheet of the MV Agusta Superveloce 800