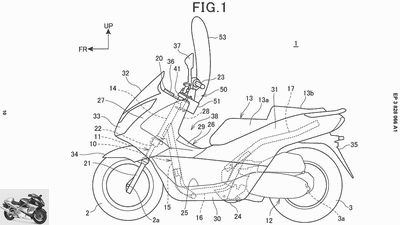 A Honda motorcycle with an airbag has been around for years – the Gold Wing. In order to equip other two-wheelers with airbags, Honda is further developing its airbag technology.

In September 2006, Honda deployed its first motorcycle airbag in the Gold Wing 1800. It cost 3,000 euros extra at the time, 15 years of development preceded the security feature. And the Gold Wing is still the only production motorcycle that can be equipped with an airbag. Honda would like to change that in the future, as can be seen from three recently published patent specifications, describing three new airbag variants.

According to Honda, almost 70 percent of those injured in motorcycle accidents can be traced back to head-on collisions, in which particularly the impact on a car, on the road or on another object causes serious injuries. In such a situation, an airbag could inflate in front of the driver and prevent him from being thrown forward over the motorcycle.

Nevertheless, the Gold Wing – since 2006 – is still the only production motorcycle that can be equipped with an airbag. Why actually? The big challenge with an airbag for two-wheelers is that it is much more difficult to predict the position of the driver than it is for a driver with a seat belt. The Gold Wing is with her “armchair” Designed for the driver, the seating position and the fairing in such a way that the driver’s posture is somewhat similar to that of a car driver.

While the airbag of the Gold Wing has a classic balloon shape that fills the space between driver and handlebars when inflated and is held in position with straps, the new designs show a kind of wall that covers as large a part of the possible impact area as possible To mitigate impact injuries and not – as with the Gold Wing – to hold the driver in his seat like in a car.

The new Honda designs focus on the positioning of the airbag. In the first variant, the airbag is positioned directly in front of the handlebar. It is folded up in a C-shaped housing that encloses the cockpit. 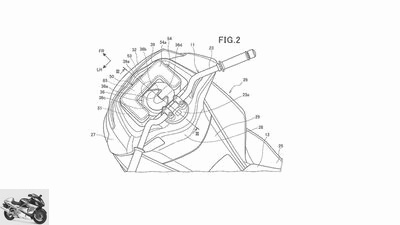 In the first variant, the airbag is positioned directly in front of the handlebar.

In a second design, the airbag is placed further forward, under the windshield. With this construction, the entire pane should fold forward in the event that the airbag unfolds. 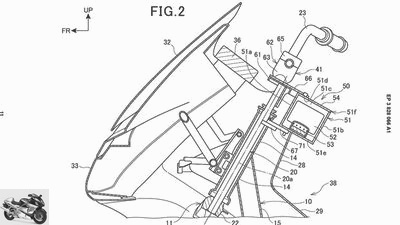 With this construction, the entire window should fold forward in the event that the airbag unfolds.

The third design shows an airbag that is mounted directly on the handlebar. To prevent the explosion from directly in front of the driver’s face when an airbag is deployed, elements of the unit should be mounted at the bottom of the steering head, with a flexible tube running to the airbag mounted on the handlebar. In the event of a fall, the explosive device should then be triggered as usual, whereupon the gas is then passed through the pipeline to the airbag and inflates it. 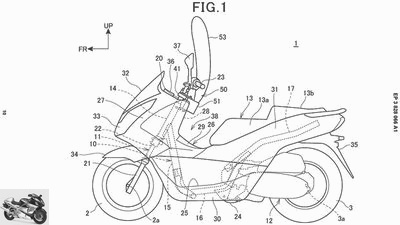 The third design shows an airbag that is mounted directly on the handlebar.

All of the designs seem to make sense. It is still completely unclear what it will be in the end, or whether Honda will use different airbags for different models.