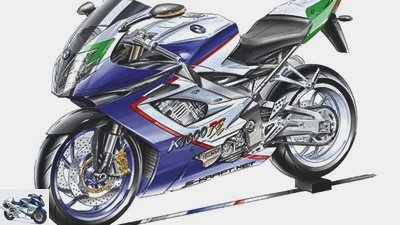 This is what the upcoming BMW super sports car is called internally and unofficially. The numbers stand for power and weight.

Aprilia has similarly ambitious goals for the 1000 V4, and also for Buell there is breathtaking progress in the house.

At the premiere of the endurance boxer in Le Mans, Max Neukirchner received an initial offer from BMW. He was offered to drive the machine in the 24-hour race in Oschersleben. But in truth it was probably about something completely different: a race in the Superbike World Championship, on a 1000-series BMW. It should be ready for a test in October of this year.

This early date is the real sensation. MOTORRAD had already heard rumors that BMW had applied to the international motorcycle sport association FIM and the American AMA for the 2008 Superbike racing series, but did not attach much importance to this year. What was in circulation about the super sports car, which was in development, suggested a later date. All snippets of information became explosive in one fell swoop, and they also seem to attract new clues in a kind of magnetic self-reinforcement.

The image of the BMW super sports car, let’s call it the K 1000 RS, is gaining in shape. And shows that BMW is going a completely different way here than in off-road racing. While a motorcycle that is unusual in many details is used there, the Bavarians rely on modern, but conventional technology for road sports enthusiasts: four-cylinder in-line engine, aluminum bridge frame, upside-down fork, chain drive. But BMW wants to put itself in front of the Japanese super sports car, which is continuously being developed in every detail. If the goal of 190/190 is actually achieved, Bayern will do it too.

At the moment, however, the level still seems to be 160/190, with 160 not referring to the weight. As the photo of a converted Suzuki GSX-R 1000 next to Stefan Kraft’s drawing shows, the BMW engineers did not simply opt for tried-and-tested technology, but only after lengthy tests with other concepts. The GSX-R does not have a conventional steering head, but has been converted to a Tele or Duolever front wheel suspension. In the end, it probably did not meet the requirements and was discarded. But the BMW-Suzuki shows another abnormality in the area of ​​the transmission output. This is reminiscent of the strange hose and pipe installations of the 990 three-cylinder that Oral-Engineering designed for BMW. MOTORRAD therefore suspects that the new Supersport BMW, like the Yamaha FJR 1300 AS, will be equipped with a hydraulically or pneumatically operated, semi-automatic gearshift, possibly even an automatic clutch. ABS and a further developed version of the ASC traction control system should also be part of the high-tech equipment of the K 1000. The position of the rear silencer to the right of the motorcycle is also relatively safe.

Its development has meanwhile reached beyond the racetrack. As recent evidence suggests, individual
Prototypes have been tested in normal traffic for a few weeks. Nevertheless, it does not seem plausible that the series BMW will be launched in spring 2008. A date at the end of August, after the works holidays, is more realistic. In any case, it could be worthwhile for BMW and super sports fans to keep their eyes open in the near future.

Buell fans won’t have to wait that long anymore. In August at the latest, the veil will be pulled from the motorcycle, which the Americans have already invited to present on the Laguna Seca race track. Without telling more about the machine. Then the more about the new must come from an unofficial source.

It will have a newly developed engine in cooperation with Rotax, a water-cooled 1200 V2 that is supposed to deliver around 150 hp. In any case, enough to accelerate the athlete to 280 km / h. The 1200 will not have much to do with the previous Aprilia V2 from Rotax. Instead of the “Aprilia cylinder angle” of 60 degrees, the engine builders probably chose the 45 degrees typical for Buell and placed two balance shafts in the engine to improve the smoothness. The engine and swing arm can do without the rubber elements previously required for damping, which promotes the stability of the chassis. For less sporty models, there should be an air-cooled variant of the unit.

No revolutionary innovations are to be expected in the construction of the frame. As a sideline, it will act as a gas tank, the swing arm as an oil container. At most the chassis geometry changes; A flatter steering head and more caster must promote straight-line stability. The racing Buell XB RR presented for the Daytona Speedweek last year provides the template for the design of the new sportswoman. Computer retoucher Guerin only allowed himself to make the misshapen seat hump a little more delicate. Certainly in the interest of most interested parties.

For the computer-generated image of the new Aprilia V4, Guerin even had a highly authentic, albeit terribly coarse pixelated template: the mobile phone photo of a design model. It proves that a new era is indeed dawning at Aprilia. While the RSV-1000 models tower quite high, the 1000-series V4 appears low and long, similar to a Ducati Desomosedici, only more angular. However, it is questionable whether the paintwork of the production motorcycle will actually be kept in variations of friendly stone and mouse gray. Here and there a stronger color accent would be nice.