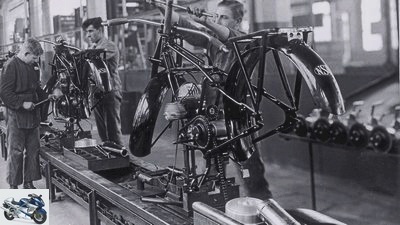 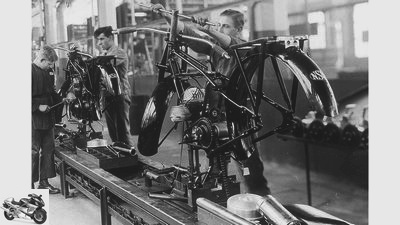 1/10
What happened to you Biographies of German motorcycle brands. 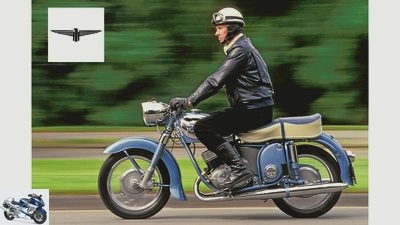 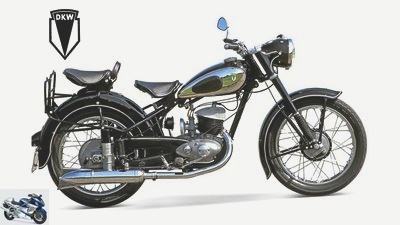 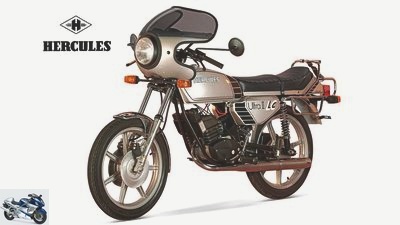 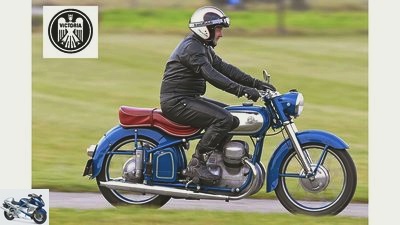 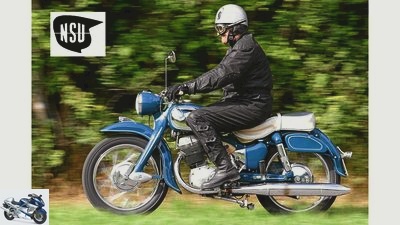 6/10
Superbike back then, available as “Standard”, “Special” or “Supermax”. 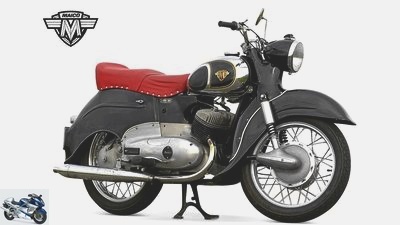 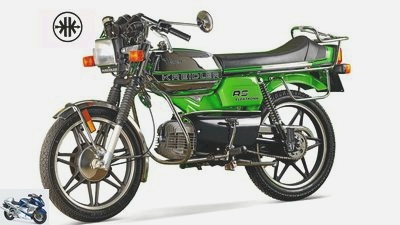 8/10
At its peak: Florett RS from 1978, very well preserved and slightly modified. 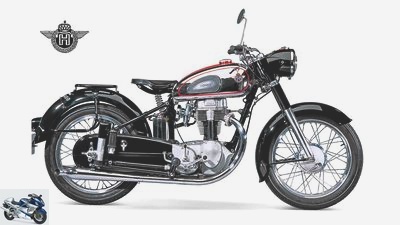 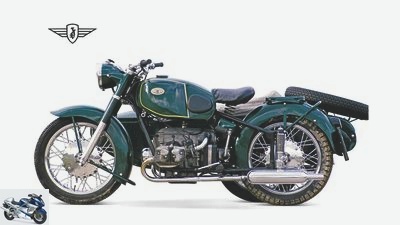 BMW and MZ are in the headlines – the Bavarians because they are doing well, the Saxons because unfortunately it’s over. But what about other German brands? History in nine short biographies. 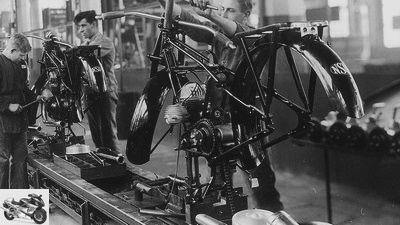 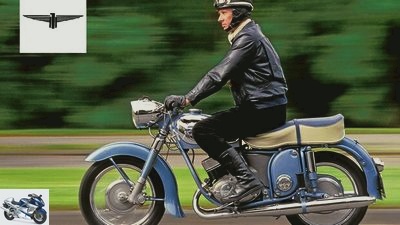 The Frankfurters experienced a short but glorious history of motorcycles.

In the beginning there was the typewriter. As is so often the case, the transition to the motorcycle is via the bicycle. The first motorized two-wheeler with a De Dion engine left the Frankfurt plant in 1901, three years later the company made its own designs. The Adler mastered a trip from Stuttgart to Kiel in 1904 with flying colors, but in the recession of 1907, motorcycle production was over again. Instead, the focus is on automotive engineering; In 1914, every fifth car sold in Germany is an eagle.

Motorcycle production only started again after the Second World War. Initially with the M 100 with a single-cylinder two-stroke engine. The Frankfurt-based company is consistently expanding its range up to the two-cylinder two-stroke engine with 247 cc and 18 hp. The Adler is so well made that Yamaha takes inspiration from it. Unfortunately, at this time, things were no longer running smoothly at Adler. 1958 Grundig takes over the Adler works. Typewriters will be produced there again until 1998.

1886 Founding of Adler Fahrradwerke as Heinrich Kleyer GmbH 1901 Motorcycle construction, 1903 own engines, 1907 Motorcycle construction discontinued, 1949 Resumption of motorcycle production: M 100 with 98, 123, and 147 cm³, then two-cylinder M 200 with up to 250 cm³, 1956 Production of the sports models Sixdays and Motocross, four gold medals in the six-day race, 1957 Sales community with Hercules and triumph, Grundig takes over Adler 1958. 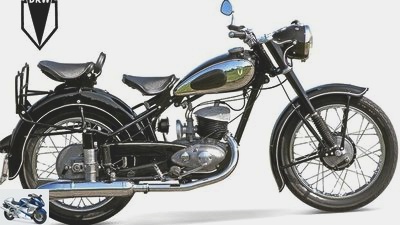 DKW RT 250 from 1952: in the economic boom years a motorcycle for climbers.

Two-stroke engines – and nothing else.

In the 1930s, DKW was one of the world’s top motorcycle manufacturers with a diverse, inexpensive range of models. When the company based in Zschopau, Saxony, was merged with various car manufacturers to form Auto Union AG in 1932, it was the consortium’s strongest economic partner. DKW only built motorcycles with two-stroke engines that were known for their reliability.

Racing machines with charge pumps spread the brand’s good reputation internationally. In 1938, Ewald Kluge became the first German to win a TT race on a 250cc DKW. After the war, the DKW tribe drifted in many directions; The Zschopau (MZ) motorcycle factory was established in Zschopau in 1952; production in the west began in Ingolstadt in 1949. In addition, the RT 125, constructed in 1939, became the most copied motorcycle in the world in many countries. Today Audi has the trademark rights. 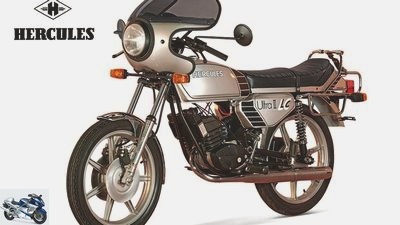 Nuremberg was the cradle of the German motorcycle industry. Hercules was there from the start.

In-house production, what for? When it comes to engines, the Nuremberg team of the early bicycle manufacturer Hercules relies on the skills of specialists such as JAP, Ilo, Villiers and of course Fichtel & Sachs. This is the way to produce excellent motorcycles for many years – especially in the 50s in the 1970s. But in the mid-1990s, the traces of the glorious Nuremberg motorcycle manufacturer, which had been sold all over the industrial landscape since 1956, end.

1956 owned by Grundig, Hercules was secretly incorporated into the Sachs Group in 1958, which took over Zweirad Union in 1962. Mannesmann later bought the Fichtel & Sachs Group, then the Dutch Winning Wheels Group in 1998, the motorcycle division, in 2001 former Hercules managers bought it back. So-called Sachs bikes have been manufactured in China with licensed Honda engines since 2004. The company is now called SFM GmbH; the name Hercules can be found today on Accell Germany GmbH bicycles. Probably the only relationship between Hercules and SFM GmbH: Sales and development are located in Nuremberg. 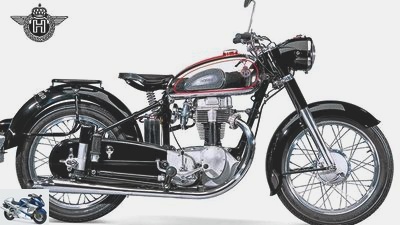 Past Horex models enjoy cult status. But what does the future hold??

Set sausage indicators and give way to marzipan – Horex fan Werner gave the brand a new boost when its legend slowly began to fade. In the reality of the 1950s, the 350 Regina and the 400 Imperator (later 450) were considered fast, elegant motorcycles. From the 60s to the 2000s, the rights to the brand are passed around like a challenge cup.

In 2009 she bought Clemens Neese, who revived the brand with an ambitious six-cylinder machine and wants to make it profitable. This spring the VR6 Roadster was delivered to the dealers, and with one of these machines MOTORRAD test boss Gert Thole went incognito for a very pleasant test drive (see driving report MOTORRAD 11/2013). Werner’s sausage indicators are not to be found in the surcharge list for the VR6.

Pre-production copy of the six-cylinder Horex 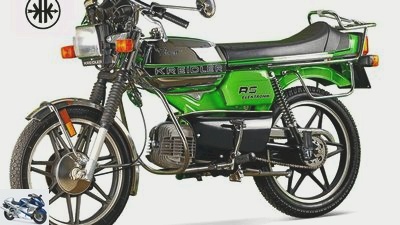 At its peak: Florett RS from 1978, very well preserved and slightly modified.

At the forefront in racing, then overrun by the Japanese.

May Allah be with you! May your bones not bleach in the desert. ”Good wishes from an Arab gas station attendant to Gunter Markert before he gets away from the two-wheeler newcomer on his 50s Kreidler rattles in the desert. The expedition succeeds, after 14 months on a long journey, the circumnavigation of the world is completed in 1955. Ten years later, Kreidler set the speed record for 50s motorcycles with 210.63 km / h.

The pilot will continue to make a name for himself, in 1976 Rudolf Kunz won the German championship for the fourth time on a 50cc Kreidler. The basis for racing is provided by mopeds, mopeds, mopeds and mopeds, which are particularly popular with young people. In 1977 the Stuttgart company cracked the magical limit of one million 50s produced. Kreidler’s bankruptcy in 1982 came as a surprise. In 2008 Kreidler presented nine new models at the Intermot; The 50s and 125s are built in China. Kreidler’s historical roots are of course long gone. 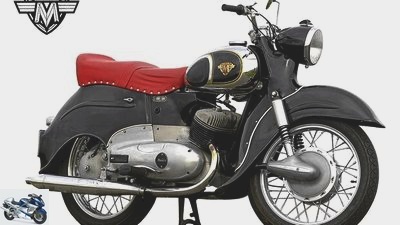 Stormy: the Taifun with parallel two-cylinder, two-stroke with 348 to 398 cm³.

The Maico Zeppelin sits enthroned on the mudguard. The pretty accessory adorned the bicycles from Maico in the 1930s, which are one of the roots of the brand. The motorcycles know how to please even without a figurehead. One of the prominent enthusiasts is the off-road rider and future motorcycle outfitter Heino Buse, who describes his Maicos as the most beautiful machines in his fleet.

The Swabians don’t shy away from it when it comes to the nitty-gritty: Maico owes its reputation mainly to the off-road victories from the seventies. Unfortunately, the brand was unable to translate its successes or major orders from the Bundeswehr into a solid financial situation. After the second bankruptcy in 1983, an odyssey of changes of ownership follows. The Koestler brothers have been managing the inventory in Leverkusen since 2000 and are the most important point of contact for maintenance and restoration. 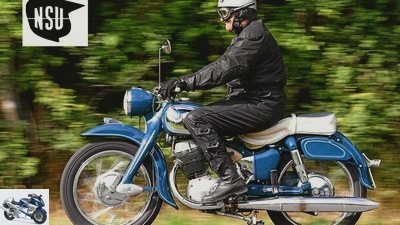 Superbike back then, available as “Standard”, “Special” or “Supermax”.

The Neckarsulm plant flourished in the mid-1950s. But then things go downhill.

The holder of the “eternal record” starts small: In 1993 Helmut Dahne drove the legendary lap on the Nordschleife on a Honda RC 30. However, he made his first attempts at driving on the NSU Quickly. Many also have vivid memories of Max. With 126 km / h it was the fastest production 250 in those years when NSU was the largest motorcycle manufacturer in the world.

The NSU machines are also fast on the racetrack. The double victories in the 125 and 250 road world championships in 1953 and 1954 are among the greatest successes. Off-roading is also going like clockwork: in the 50s and 60s, 23 NSU drivers are at the end of the Season at the top. Nice memories, but that’s about it. At least as far as the NSU brand is concerned. Half a century ago, the last NSUs left the Neckarsulm plant. Today Audis roll off the assembly line there, the rights to NSU are in a drawer at Audi. 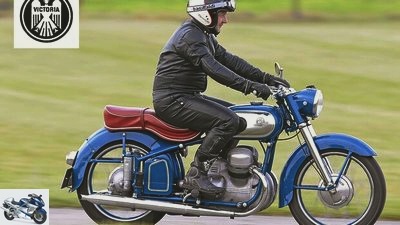 A representative of Nuremberg motorcycle culture who stood for creative constructions and unusual technology.

Victoria moved from bicycle construction to motorcycle production at an early age. From 1904 there seems to have been a notable series production. From 1920, the Nuremberg-based company built the KR I, which was powered by the same BMW boxer engine that was used in the BMW R 32 from 1923 – but here with the cylinders not longitudinally, but transversely to the direction of travel. Up until the Second World War, Victoria made a name for itself with an enormous technical variety that arose from its own designs and the purchase of built-in motors.

In 1932 the KR VI won the European Hill Climbing Championship in the 600-class sidecar and became the first “mountain champion”. The name became famous from 1953 through a newly designed 350 with V2. The last Victoria were built in 1957 with a 175 Parilla engine. Under the current owner, Victoria has found its way back to the beginning – the company produces bicycles.

1886 Foundation of the company Frankenburger und Ottenstein Nurnberg, 1899 Victoria Werke AG, 1901 first motorized two-wheelers 1920 Production of the KR I with a 7 hp boxer engine from BMW, later followed by the KR II and KR III with their own 12 hp ohv boxer, 1925 first compressor motor in Germany,1958 Victoria, Express and the DKW two-wheeler division merge to become Zweirad -Union AG; she will 1966 taken over by Hercules, 1995 the Victoria trademark rights belong to Hermann Hartje KG. 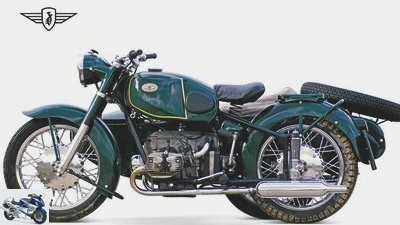 They just wanted to build motorcycles. And despite bankruptcy, the company is still present in the scene today.

The motorcycle as a commodity. The “farmer’s motorcycle”, made in 1927 by Zundapp developed. It thus nourishes the needs of customers – two years after its market launch, 75,000 so-called standard models have been sold. Numbers of this magnitude catapult the Nuremberg-based company into the ranks of the most important two-wheeler manufacturers of the time. In contrast to the competition, motorcycles have been the core business throughout the company’s history.

This ends in 1984. A Chinese company buys and ships the production facilities to China and produces Zundapp motorcycles for the domestic market. This concludes the Zundapp chapter for German economic history. But not in the motorcycle scene. Zundapp is alive – for example at the elephant meeting, which every year attracts motorcyclists from all over Europe in winter.

Top of the class for light motorcycles