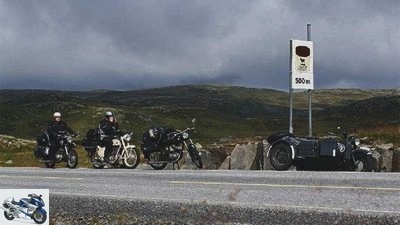 Four young people dare to tour Norway on motorcycles that are otherwise admired in museums. Shoo their puffs over high passes, through deep trenches and prove: It works! It wasn’t just the trolls who were amazed.

Sitting upright with your bum nestled in a comfortable rocking saddle, it has been going straight for hours. We are just before the Norwegian border. I only recognize Jens and Stefan driving behind me when I see the vibrating rearview mirror of mine MZ hold tight. Bernd, on the other hand, cannot be overlooked. With his BMW Wehrmacht team, he drives ahead and cuts a swath in the wind for us.

With the vehicles that have carried us 1000 kilometers through Germany and Sweden in the last two days, most of them would probably only dare to go to the next restaurant on Sundays. We, on the other hand, have bigger, more distant and higher things in mind. Our adventurous entourage consists of the said, sidecar-equipped BMW R 75, built in 1942, my Emme RT 125/3 from 1959, Stefan’s chic, ivory-colored Sport AWO from 1956 and Jens ‘1961 MZ ES 250.

With a constant speed of 85 km / h we are no longer far from the rush of speed and make good progress. Thanks to Bernds wind shadow, my RT is satisfied with a phenomenal three liters of fuel per 100 kilometers. His thick 750er consumes almost three times as much, and when fully loaded it weighs around 600 kilograms and almost falls into the lower car class. We are a little relieved when we hit the tent pegs in Norwegian soil for the first time that evening.
Our travel project started months ago. We were nervous and heard the fleas coughing while our machines were being set up. Doesn’t the crankshaft have too much air after all? Is the valve clearance correct? How long will the igniting spark reliably jump over? And then, as with Stefan’s AWO, a small fork repair two weeks before the start of the trip almost ends in a complete disassembly of the motorcycle or a strange noise on the ES engine turns out to be crankshaft bearing damage and escalates into a complete engine overhaul.

Nevertheless, we four Saxons set out to explore the land of the trolls. Trolls are suspected of doing all sorts of mischief, but according to information from other travelers to Norway, they can be bribed: they should seldom refuse a schnapps. In return, they keep the Norwegian rain clouds off the traveller’s neck. You can think what you want, but the facts speak for the schnapps victim. In any case, we only drove about 50 of the 5500 total kilometers in the rain.

Unfortunately, the first contact with these long-nosed Norwegian natives is rather bumpy. Everything starts harmlessly with a stop under boulders, which we clearly identify as a troll castle. I get down to photograph Bernd during his act of bribery. Only ten meters separate me from the Emme, when it slowly begins to lean towards the roadside and with an elegant 320-degree turn it disappears into a waist-deep gravel ditch. My heart beats up to my neck, but I am lucky in bad luck. The excessive luggage, which I as a woman cannot do without, acts like a gigantic airbag that protects the RT from major wounds. So she just escaped the pushing trolls.

The shock is quickly forgotten. In the evening in Lysebotn by the Lysefjord, the original Norwegian nature takes over and captures us completely. The small piste, which branches off from road 9 towards Lysebotn and crosses a treeless high moor landscape, has everything a real motorcycle route needs: steep serpentines down to the fjord, vast unspoiled nature and above all no other road users who could possibly disturb the enjoyment . However, this shows that the fuel reserves of our classic cars are often seriously scarce in the sparsely populated areas of Norway. Bernd did have an emergency ration in the form of a reserve canister on the BMW, but once even that wasn’t enough and we had to roll eleven kilometers to the next gas station without power. Fortunately, everything is downhill.
Well-known Norwegian sights are on the agenda for the next few days: The Predigtstuhl is climbed and the tunnel system towards Hardangervidda, Bergen and Flam is explored. Over 40 tunnels in one day ensure a higher pulse, there is neither a second lane nor breakdown bays. Although the windy six volt alternators on all vehicles have been replaced with modern 12 volt systems, such an oldie is good for surprises in every situation. Fortunately, apart from the obligatory cleaning of the carburetor, there are no major repairs to be done.

Everywhere our tour group is admired by locals and other travelers. Once, in the Jostedalsbreen area in the direction of Geiranger, for once someone is not primarily interested in Bernd’s BMW, but in my little two-stroke engine. This Norwegian apparently owns an RT and is a proud member of a German MZ club. Nice side effect when you travel with old technology: The people are open-minded, interested and always helpful, which is confirmed a few days later on a lonely country road.
So far we had spent kilometers of sunny days, climbed the Dalsnibba with an altitude of 1467 meters, fished in the Geiranger, climbed the serpentines of the Trollstiegen and reached Kristiansund via the Atlantic road. Now we are on the way south again when Bernd stops in front of a lonely mailbox near Andalsness in the direction of Jotunheimen. His front brake is no longer working properly, and he thinks dirt is the cause. So get out your bike and clean! To make room for screwing, Stefan wants to move back a bit behind him, unfortunately overlooks the overgrown ditch and suddenly disappears with the AWO at a depth of one and a half meters. Jens, who wants to help, does not pay attention to his own machine in the hustle and bustle, so that the ES goes down too.

At least the AWO with the footrest and oil pan got caught on a protruding stone and therefore did not quite reach the bottom of the trench. The ES also remains relatively intact. Nevertheless, everyone can see that not everything is going smoothly, as we are laboring there on the side of the road. And when the tool was spread out over a large area around the vehicle and mechanic, the heavy rain immediately set in. Class! But suddenly the Norwegian woman who belongs to the mailbox stands next to us and asks how she could help. It’s not that easy to make it clear that a grease gun is missing, of all things. Who still knows something like that? But the friendly lady turns out to be a classic car connoisseur and a few minutes later presents what she wants. Incomprehensible. We return the favor with a bottle of German high-alcohol. Great thing in a country where spirits are more expensive than four-star menus.
The journey continues and we climb the highest mountain in Northern Europe on foot with the Galdhoppigen. Then it goes through the magnificent Jotunheimen National Park, the Rijukan Mountains, over the fairy tale route and to the stave church in Heddal. Norway at its best.

We finally make our long journey home via Oslo and Denmark. Stefan’s manifold has been hanging on a wire for 1000 kilometers, and the ES ignition lock, which was repaired with crown caps and silicone at some point along the way, should urgently be replaced. Nevertheless, we have proven that even more than 50-year-old motorcycles can still pack the most demanding journeys and look forward to our next projects, which, as always, will be tackled without an escort vehicle, spare parts and hotel rooms, but with a good portion of naivety. What is supposed to go wrong??

navigation
A map from Cappelens bought in Norway served as a rough guide. Otherwise, a Garmin navigation device did a good job. Frequent ferry passages were accepted. If you don’t want that, you should get detailed maps to avoid the fjords, which often means long detours of more than 100 kilometers. Kummerly + Frey, for example, offers maps of Norway for 9.95 euros each in a scale from 1: 250,000 to 1: 400,000, covering the south, center and north.

overnight stay
In Norway the so-called everyone’s right applies. Means: Anyone can camp where it is not expressly forbidden and does not bother anyone. However, if you want to take a shower from time to time, you will be delighted with the many beautifully located campsites (www.camping.no). Between 100 and 150 Norwegian kroner is charged per tent and night, which is the equivalent of twelve to 19 euros. You also have to reckon with the fact that there is no reception. At some point, however, someone always shows up relaxed to check out. Those who do not like camping can rent one of the numerous huts, which are mostly designed for four people and are available from 45 euros per night in the off-season. The equipment is usually not very modern, limited to bunk beds and simple cooking facilities.

Finances
Money can be exchanged in any major bank, but an appropriate exchange fee is charged. Since this is independent of the amount, it is worth swapping together. At the ATM you can get a maximum of 2000 kroner (250 euros) at a time.

Refueling and motorcycles
The petrol station network is not particularly dense. A credit card is important, as many petrol stations in remote areas only have fuel terminals. Despite the Norwegian oil reserves, the price of fuel is the highest in Europe. While the 26 hp 750 series BMW and the 14 hp AWO 424 Sport with 250 cubic centimeters of displacement work according to the four-stroke principle, the two-stroke machines MZ ES 250 (14.2 hp) and the MZ RT 125/3 (6.5 PS) when refueling with petrol, an admixture of oil at a ratio of 1:40. We have had good experience with Motorex two-stroke oil, as, unlike other products we tested, it got along best with the additives that are mixed with gasoline in various countries.

Travel time
In terms of weather, June and July are the most suitable months for a trip to Norway. However, we were out at the end of August / beginning of September and still had the best weather. So don’t skimp on schnapps for the trolls. And pack absolutely weatherproof clothing.

getting there
For travelers to Norway, there are ferries from Germany to Sweden or directly to Norway. The Kiel – Oslo route takes around 20 hours and costs 634 euros there and back in the high season, for example with Colorline, per person, motorcycle and comfortable cabin space (www.colorline.de). Ferry trips from Sassnitz to Trelleborg in Sweden take four hours and cost from 43 euros per person and motorcycle, depending on the travel time (www.scandlines.de). There are also ferries to Sweden from Rostock (5.5 hours) and Travemunde (7.5 hours).