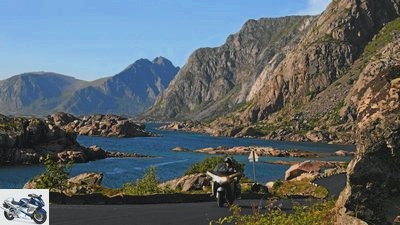 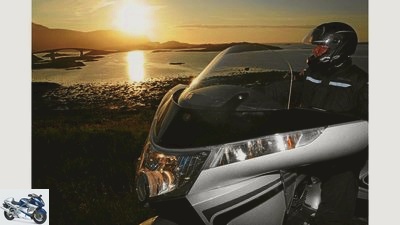 1/12
With a motorcycle through Norway in midsummer. It burns here for weeks “eternal light”. 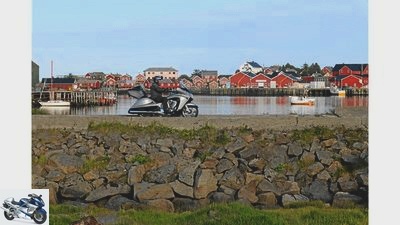 2/12
On the way to Å, the gigantic US twin flies through a colorful model railroad landscape. 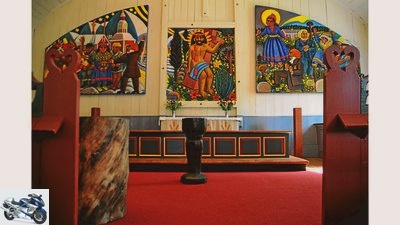 3/12
A matter of faith: In the Lappen Church in Jukkasjarvi, the world was once over for the monks in the Middle Ages. 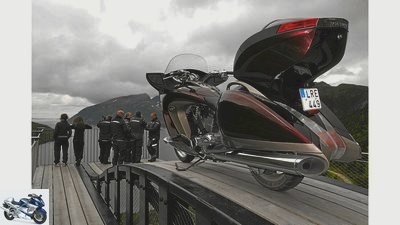 4/12
Vote of confidence: spectacular parking on the Skywalk with an unobstructed view of the Ersfjord from the island of Senja. 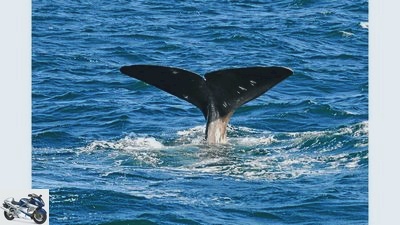 5/12
Power games: Encountering a sperm whale on a whale safari through the North Sea gives you goose bumps. 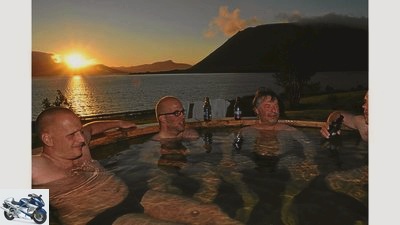 6/12
Time out: shortly before midnight with a cold beer in the hot “hotpot”. The sun will rise again in five minutes. 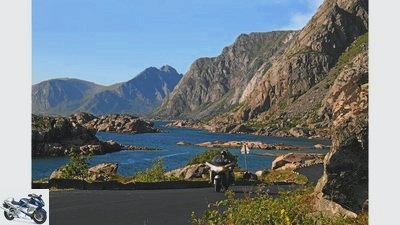 7/12
Shortly before the fishing village of Henningsfær, the Victory glides on lonely roads on a wildly rugged coast. 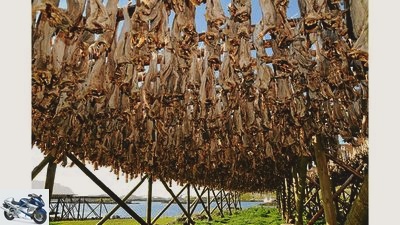 8/12
Parched: Tørrfisk is a specialty. The fish, dried in the salty wind, is exported all over the world.

9/12
Exhausted: Ole is impressed by the vision. His Volvo marine diesel has a mere 15 hp. 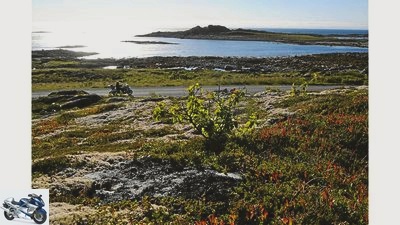 10/12
Maxed out: Behind Andenes, it goes out onto the North Sea. This is where the motorcycle world really comes to an end. 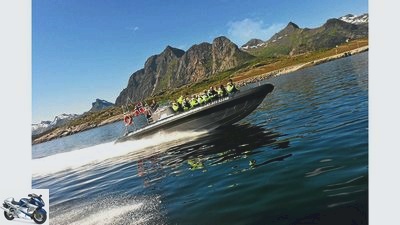 11/12
Turned out: With a light “Ribboat” and 700 hp, the trip into the Troll Fjord becomes a winding pleasure. 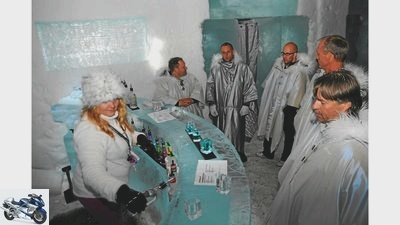 12/12
Frozen even in midsummer: the Icehotel in Jukkasjarvi with its ice-cold bar.

Norway in midsummer by motorcycle

On the go: Norway in midsummer
Discover Norway by motorcycle

Sun-seeking motorcyclists shouldn’t seek their luck in southern Europe. The course leads up north. Beyond the Arctic Circle, it burns for weeks “eternal light” of midsummer. Let’s go on a wonderful trip through a gigantic fjord and rocky backdrop.

Admittedly, the travel plan initially did not spark any enthusiasm: on fat USA cruisers through Norway’s barren north. That already sounded like a hackneyed tour à la Route 66. Then the starting point was the world-famous “Icehotel” in Jukkasjarvi, Sweden. Do you know French ski areas off-season? One imagines a completely thawed hotel in the Scandinavian summer to be just as tingling. The landing in Kiruna doesn’t exactly lift the mood. Northern Sweden is overcast on this day. The SAS pilot sees to it that the handful of passengers – a bearded mixture of hunters and anglers – quickly leave the Airbus. The new passengers are already waiting at the gate, more than one large-capacity aircraft seldom gets lost on this gloomy mini-airfield every day.

Kiruna itself is as attractive as an Ikea convict camp: streets swept empty, an unadorned center with gray prefabricated buildings. In fact, however, life pulsates underground. Thousands of kilometers of tunnels crisscross the ground in order to dig the iron ore, which is dearly traded on the world market. Huge spoil heaps frame the small town on European route number 10. Let’s get away. Our escape vehicles wait just a few kilometers further on a desolate, football field-sized gravel area: in the frosty winter, the foundation for the breathtaking, but always ephemeral “Icehotel”, which is built every year from mighty blocks of ice.

On the go: Norway in midsummer
Discover Norway by motorcycle

But now the mighty 106 cubic inches of the Victory Vision and Cross Roads take your breath away. The V2, which is sensational even in this deserted wasteland, swing northwards on the broadly curved E10. And all of a sudden the gloomy prelude is blown away, the trip takes on operatic features. The landscape becomes a gigantic stage, bathed in a light that shines here, 200 kilometers north of the Arctic Circle, for a short eternity. 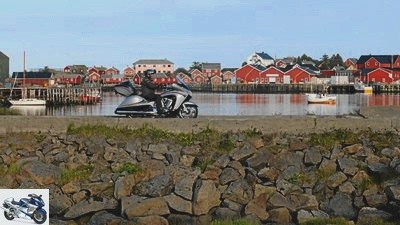 On the way to Å, the gigantic US twin flies through a colorful model railroad landscape.

But the sun is still hiding behind tough bands of cloud. Instead, rugged mountain ranges suddenly emerge from the flat, green infinity, increasing in size and violence. Lapporten, the gateway to Lapland, is crossed. According to legend, a troll sat down on the ridge and created this striking valley floor between the two mountain peaks Tjuonatjåkka and Nissuntjårro. In general, the giant mystical figures will be with us from now on. Behind the shiny silver Tornetrask Lake, the European route winds its way up, without stopping it goes over to Norway. The road becomes narrower, the air salty, the wind stronger. The proximity to the sea literally melts on the tongue.

First we leave Narvik in the south, at Fossbakken we turn off the busy tourist routes with E-license plates and swing on winding country roads with three-digit sequence towards the North Sea. 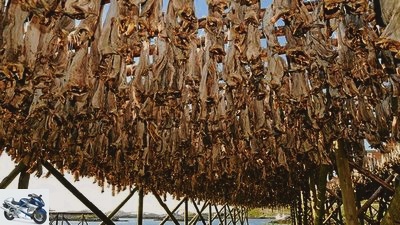 Parched: Tørrfisk is a specialty. The fish, dried in the salty wind, is exported all over the world.

The big pots don’t mind the variety. They sail with us from one fjord to the next with a pleasant bubbling. It is shortly after 10 p.m. when the wind finally tore up the clouds completely. But even if the sun comes out late, we don’t have to fear its downfall at this time of year!

The golden yellow light falls on a road that hugs the landscape like an endless carpet runner. In this constantly new, varied world of curves, the highway pilot as well as the curve-addicting alpine fan get their money’s worth. Scattered red, yellow or blue houses cling to the coastline, Norwegian flags flutter proudly in the wind. Behind the lush green of the meadows, which gently tap into the sea, rise black, shiny rocks from which the water sweats. Waterfalls plunge into the depths without stopping, the northern slopes are covered by numerous fields of snow. Solitude surrounds us until we reach Tromsø. Life pulsates in the port city 365 days a year: seafarers and students shape the largest city in northern Norway with 70,000 inhabitants. Hunger drives us to Yona’s pizzeria on the Hurtigruten pier. We hastily stuff the food that is not typical of the country into us, while the US flails cause a small crowd. But we soon felt lonely again when we left Tromsø via a tunnel system that was unique in terms of road construction and had a cellar under the entire city. Almost 360 kilometers above the Arctic Circle, we turn south towards Vesterålen.

On the archipelago north of the more famous Lofoten, the picturesque narrowness of the fjords breaks open. The closer we get to our stage destination Andenes, the more enormous the landscape becomes: Huge, tens of kilometers wide, green valleys, which are surrounded by gigantic, cuboid boulders, form the northern tip of Vesterålen. Did the trolls work here too? The storm blows over the Riksvag 82 from the open sea, and the Victory crews have their hands full to keep the steamers on course. Half an hour later you have to keep the sumptuous pizza food with you: on board a whale watcher, you go out into the North Sea. Waiting in the heavy swell is a huge blow to even seaworthy amateur captains. But the nausea is suddenly forgotten when the huge hump of a sperm whale rises from the sea within reach. There is reverent silence as the animal’s fluke disappears in the 1000 meter deep water. 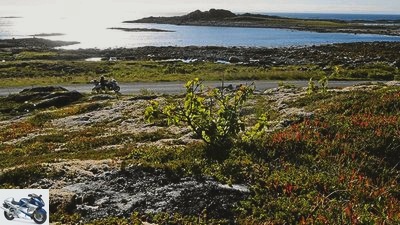 Maxed out: Behind Andenes, it goes out onto the North Sea. This is where the motorcycle world really comes to an end.

We saddle up with shaky knees, drifting on to the Lofoten Islands. Here, too, travelers are overwhelmed by the diversity of mountains: sometimes rugged and smashed, then smoothed again and polished to a mirror-like finish as if by an oversized troll’s hand, the misty raised bogs covered with a carpet of moss. The windscreens capture the panorama in Cinemascope. Green and blue blaze in all shades when the light wanders over land and sea for 24 hours. An overkill of endorphins sets in as the seascape turns into liquid gold on the way to Å. And one thing is clear to us: we will continue driving all night. 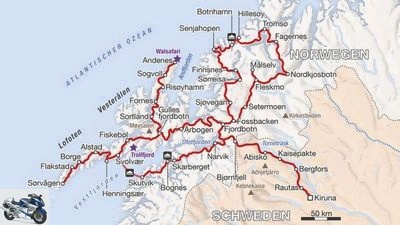 Enjoy breathtaking fjord landscapes in the “eternal light” of the polar sun: Away from the major tourist routes to the North Cape, Lofoten and Vesterålen are a corner paradise.

Getting there:
The starting point of the tour is the Swedish city of Kiruna. The city of 17,000 inhabitants is located around 200 kilometers north of the Arctic Circle and is characterized by iron ore mining. If you want to travel with your own motorcycle, you should choose the ferry connection Kiel-Oslo (Color Line, approx. 19 hours) or Kiel-Gothenburg (Stena Line, approx. 14 hours). Bookings can be made on the shipping companies’ websites (www.colorline.de or www.stenaline.de). From Oslo it is another 1400 kilometers by land, and from Gothenburg 1600 kilometers. If you want to rent a motorcycle directly on site (see item “Organized travel”), you can fly from Germany to Stockholm and from there on to Kiruna with SAS. Flight details and bookings at www.flysas.com

Sightseeing features:
Going on a whale safari in Andenes is an absolute must. The Arctic Ocean is up to 1000 meters deep on this stretch of coast in Norway – a popular area for sperm whales, which hunt octopuses here and come up to take a breath. With the ships of the Hvalsafari AS you can get up close and personal with the mighty animals. Information at www.whalesafari.no, prices from approx. 150 euros. With plenty of speed we continue south with 700 hp rubber dinghies through the fjords and archipelago of Lofoten. The starting point is the port of Svolvær, the two-hour trip leads, among other things, to the remarkable Troll Fjord, which is also used by the large Hurtigruten ships. Information at www.lofoten-explorer.no, prices from approx. 100 euros. 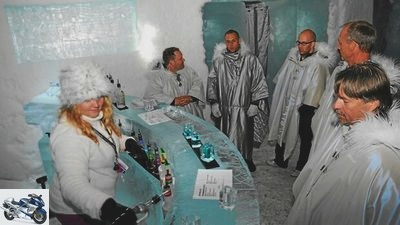 Frozen even in midsummer: the Icehotel in Jukkasjarvi with its ice-cold bar.

Organized trips:
The tour described above is offered in different variants directly through the Icehotel in Jukkasjarvi. You will ride with a tour guide on various Victory motorcycles (Vision, Cross Roads or Cross Country). The tours last five to six days and some of them lead to the North Cape or Finland. The price of the above-described tour over the Lofoten and Vesterålen archipelagos including a one-day ferry passage on a Hurtigruten ship with tour guide, accommodation and breakfast is 25,995 Swedish kronor (around 2940 euros). If you want to go on your own discovery tour through Lapland on a rental motorcycle from the Icehotel, you have to pay 13,950 crowns (approx. 1580 euros) including overnight stay and half board in the Icehotel for four days of driving. A GPS with already programmed route suggestions is provided by the Icehotel. In the summer season, accommodation is in comfortable log cabins in the hotel complex. Information and bookings directly through the Icehotel, Tel. 00 46/9 80/6 68 00, www.icehotel.com. Inquiries can also be made by email to the MOTORRAD action team: info@actionteam.de