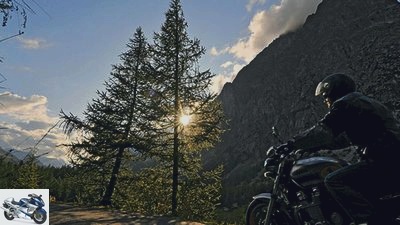 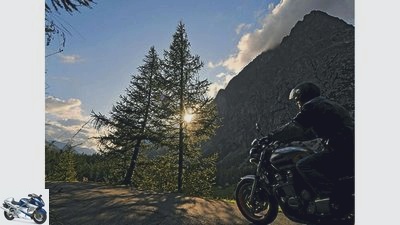 1/17
Instead of taking the busy main routes across the Alps, it is worth taking a look at the secondary routes that are a bit out of the way. Here the smaller Val Ferret. 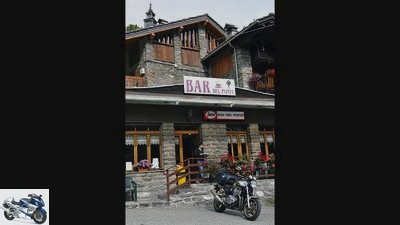 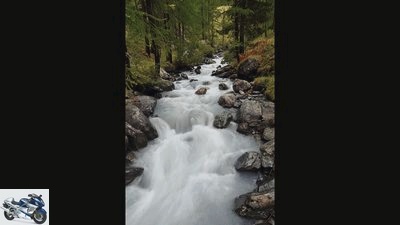 3/17
At Saint-Jacques (Val d’Ayas) everything goes down the drain. 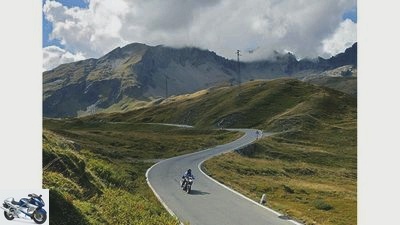 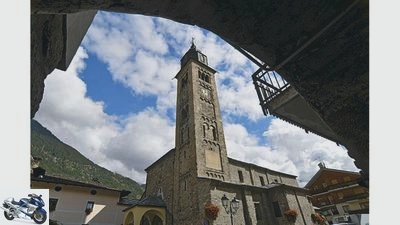 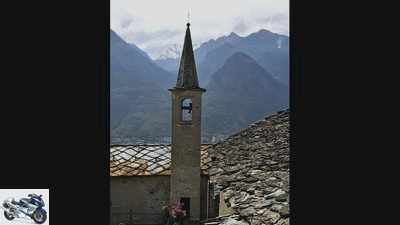 6/17
In Paye (municipality of Verrayes) the church is left in the village. 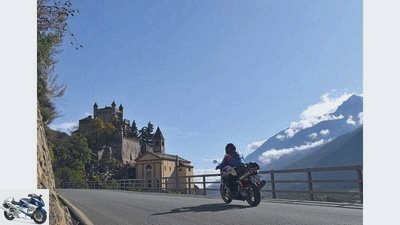 7/17
Saint-Pierre attracts with churches and castles. 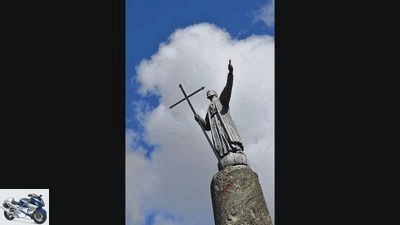 8/17
Brave guy on the summit of the Kleiner Sankt Bernhard pass. 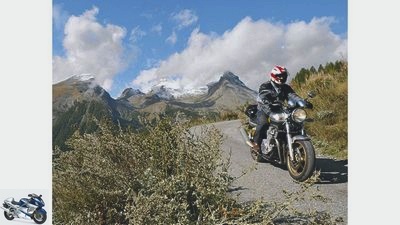 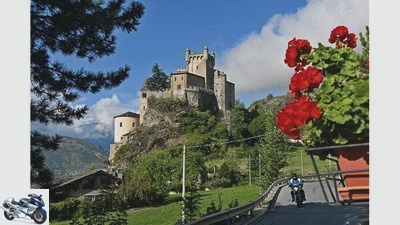 10/17
There are castles along the way like those on the Middle Rhine: close together within shooting range. 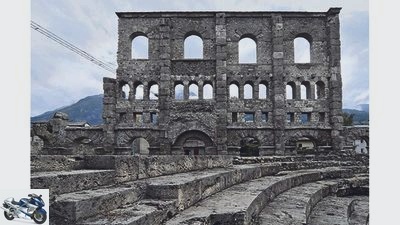 11/17
The Roman amphitheater in Aosta is rarely sold out. 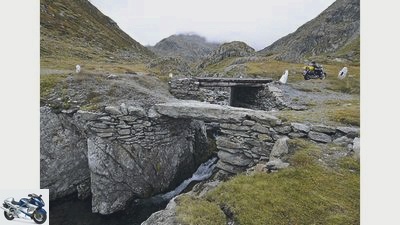 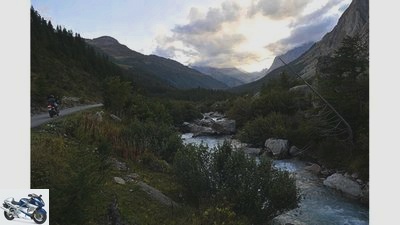 13/17
The Val Ferret in the north-western tip of the region is worth a detour. 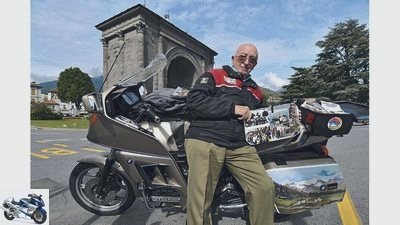 14/17
Otello, the man with the BMW and the topcase treasures. 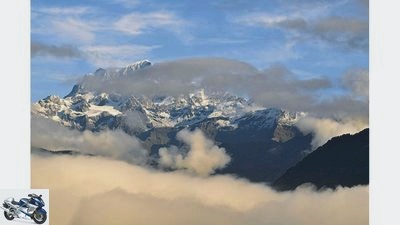 15/17
The view from Saint-Pierre is worth stopping once. 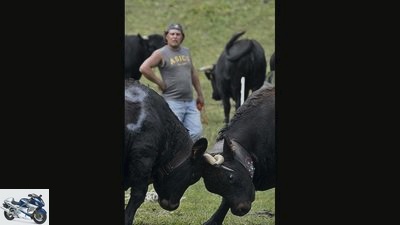 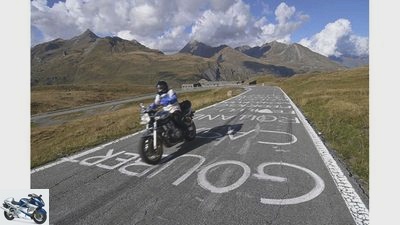 17/17
In the footsteps of the cyclists you wind your way up the pass road.

On the way: Aosta Valley

On the way: Aosta Valley
An alpine trip away from the main routes

The northern Italian Valle dAosta with its sixteen secret side valleys is framed by the four-thousand-meter peaks around Mont Blanc and Matterhorn as well as the Great and Little St. Bernard passes – away from the main routes, alpine fans who are addicted to curves won’t keep an eye dry.

Domenico knows everything. The 49-year-old Grauschopf is an inspector at the police in Aosta and at the same time president of the local motorcycle club – so the ideal contact for the question: What are the ten best motorcycle routes around the Aosta Valley? Even Domenico’s first tip turned out to be a direct hit, the family Hotel Monte Emilius (in Aosta towards the Pila ski area) as an inexpensive base camp for the tour. Mille grazie or merci beaucoup.

The Valle d ?? Aosta is the smallest region in Italy and enjoys a special autonomous status. It once belonged to the Kingdom of Savoy, so the second official language is still French today. Important traffic routes in the western Alps have crossed here since ancient times, as evidenced by the Roman amphitheater and the Arch of Augustus in Aosta. The many side valleys created by glaciers and torrents are more attractive than the central valley, through which the Dora Baltea and trucks rush to and from the Mont Blanc tunnel. Which doesn’t seem particularly appealing when looking at the map (“Always dead ends”), guarantees undiluted pleasure. No through traffic disturbs the Tête-à-tête with the grandiose nature, often narrow cul-de-sacs lead up to mountains and clouds.

On the way: Aosta Valley
An alpine trip away from the main routes

The road from the mining town of Cogne winds its way up to Gimillan like a corkscrew. Weathered slate roofs, roughly plastered natural stone facades, lush flower pots and above everything an open bell tower where Django could wait for visitors – what an idyll. Above Gimillan there is a hiking trail for the Yamaha XJR 1300 Ende Terrain. After all, the eye can wander into the distance, up to the majestic peaks in the Gran Paradiso National Park, as if decorated with white ermine collars. Nomen est omen.

In addition to the Val di Cogne, number 6 on Domenico’s list of the top ten, there are three other valleys, like the bent prongs of a pitchfork, reaching deep into the pristine mountain landscape around Italy’s only four-thousand-meter peak, the Gran Paradiso. Describing the different characters of Val Savarenche, Val di Rhêmes and Val Grisenche (together in 10th place) would go beyond the scope of this article, so I can only say this here: There are plenty of curves, albeit rarely as a spectacularly tangled ball of spaghetti – which makes them slightly stiff at the hips Boliden are written on the body. When night falls in the surprisingly graceful Val Grisenche, the headlight cone ghosts disoriented through the high-altitude fog and does not even hit the Lac de Beauregard, it is time to hurry back to the set restaurant table in Monte Emilius. 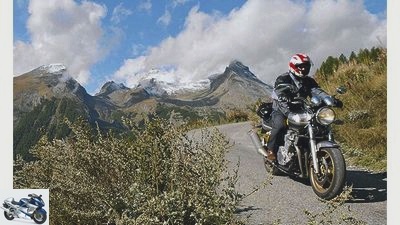 Gran Paradiso – the name sums it up.

The next morning, the trip to Valpelline (9th place) turns out to be quite a wet pleasure. Forests, meadows, villages, rocks – everything is blurred behind a gigantic curtain of water. H2O in its most beautiful form, on the other hand, at the end of the street, where the Place Moulin reservoir – one of the largest dams in Europe – lies embedded in the valley, as if someone had lost a turquoise brooch. After only 94 kilometers, the motorcycle is parked again in front of the home port, when did that ever happen? And when should I have half a liter of red wine for lunch? Picobello then the weather the next morning, so let’s go, rough direction: Mont Blanc.

As on the Middle Rhine between Koblenz and Bingen, one old castle chases the next in the Valle d ?? Aosta. They were mostly built close to each other within firing range and certainly didn’t deserve to be used as a photo backdrop instead of being viewed en passant. Bard, Verrès, Issogne, Ussel, Fenis, Sarre, Introd. But the mountain road from Saint-Pierre to Saint-Nicolas is even more attractive! Nine kilometers of appetizingly prepared asphalt (5th place), plus apple orchards and the highest vineyards in Italy. Cafe Quinson in medieval Morgex, which is ennobled with a Michelin star, also promises the highest levels of enjoyment. Alternatively, gourmets in a hurry can get a few sandwiches in the Alimentari opposite, thickly topped with Prosciutto di Bosses or Fontina cheese. The right refreshment for numbers 2 and 4 on Domenico’s list, because they now encourage people to collect altitude meters. From Morgex, the road climbs a good 1000 meters to Colle San Carlo, from there plunges 500 meters down to the winter sports resort of La Thuile, and then climbs another 750 meters to the summit of the Little St. Bernard Pass (2188 meters).

As seductive as it is to start from the Little Saint Bernard to France on the Route des Grandes Alpes, it is just as dutiful to return to the Valle d ?? Aosta – also a curvy pleasure – and past the noble Courmayeur directly to the glaciated Mont Blanc massif . Like a stranded Moby Dick, the colossus blocks the end of the valley, leaving only the option of being swallowed up by the mouth of the Mont Blanc tunnel – or at the last moment to turn the oar around, turn right into Val Ferret or left into Val Veny. Even if the two pretty ones didn’t make it into the top ten, they are worth a flying visit. An absolute must on other days is the Col di Joux. The pass road between Saint Vincent and Brusson is the undisputed number one on the list, and when the footrests more or less gently caress the asphalt, it becomes clear why. If you prefer to slow down, drive from Brusson through Val d ?? Ayas to St. Jacques, where at the end of the road a mountain stream gurgling through the forest invites you to meditate. 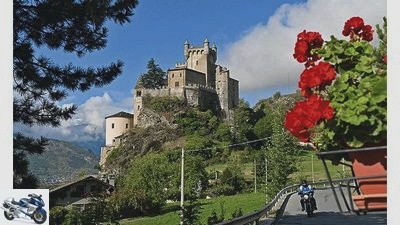 There are castles along the way like those on the Middle Rhine: close together within shooting range.

The neighboring Gressoneytal (place 8), enclave of the German-speaking Walser and with the Castello Savoya and the Alpine Fauna Museum in St. Jean, offers the opportunity to show your feet in a culture-conscious way. Maybe you book your next skiing holiday right away, because the areas here on Monte Rosa are among the most beautiful in the region. The weather conditions in Breuil-Cervinia fit well: the thermometer shows six degrees, no trace of the Matterhorn, literally the crowning glory of the Valtournenche (7th place).

Anyone who has counted knows: Of Domenico’s ten favorite routes, the number 3 is still missing. And that can only be the Great Saint Bernard. Thanks to the tunnel, heavy traffic turns off at Saint-Rhemy-en-Bosses. While the serpentine road on the Italian side has a brand new surface, on the other side of the border in posh Switzerland it is wrinkled like the skin of an old orange.

Last day, meeting Otello, who was 78 years old and second eldest in the local Motoclub delle Alpi. His great love comes from Bavaria: the BMW K 100 LT, a champagne-colored gem from 1987 with around 200,000 kilometers on the square clock, has a highly individual touch thanks to the artistically painted mountain landscapes on the case lids and an extensive collection of photos and music cassettes in the top case. Photo session with seniors at the Arco di Augusto of Aosta, the Roman triumphal arch from 25 BC, and then “Ciao Otello and Domenico”, to complete the collection of mountain landscapes on a final tour.

First in a rapid slide on the SS 26 through the Aosta Valley to Pont-Saint-Martin and there a few scoops of ice cream from the Italian. In order not to be stoned as a cultural banause, another lap of honor around the town’s landmark, the old Roman bridge over the Lys, then on to the Finale Grande. The Val Champorcher has what it takes to be a champion of hearts. It starts with a couple of lush hairpin bends and ends 1000 meters higher and 15 kilometers further at Bataille de Reines. What looks like a scuffle between bulls from a distance is the traditional fight of the “Milkmaid”, who compete against each other from March to October in many places in the region and even wear start numbers sprayed on their fur. You have to be urged to push something, but that doesn’t detract from the pleasure. But even those who don’t like cow fights are guaranteed to find something else in the Valle d ?? Aosta. As Domenico said so aptly: “Everyone will find something different here to be beautiful.” Incidentally, he didn’t like the route from the Hotel Monte Emilius up to Pila that much, because there was hardly anything to see, except for serpentines. a matter of taste. 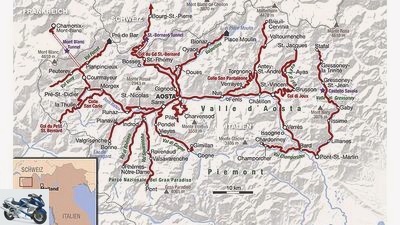 Anyone who only knows the Valle d’Aosta in the far north-west of the Italian Alps from speedily passing through on the motorway or state road will experience their silent miracle in the many side valleys. Don’t forget your hiking boots!

getting there
Even if there are many beautiful paths to your destination, especially in the mountains: the most direct one leads here on the toll Swiss motorways to Martigny and from there on over the Great St. Bernard Pass or tunnel to Aosta.

Travel time
After or before winter with its mountain roads that are impassable due to snow and ice, i.e. from May to October, this is how the motorcycle season in Valle d ?? Aosta could be briefly described. Since the roads in most of the side valleys end at around 1700 meters, only the Great and Little St. Bernard passes are well over 2000 meters high, the snow-free time window is at least somewhat larger than next door on the French Route des Grandes Alpes.

Worth seeing
At least one paragraph should be devoted to them here, the castles and palaces of the Aosta Valley, which are so neglected in the text. Examples are the massive Bard Fortress, Fenis Castle with its towers and frescoes, Issogne Castle with its pomegranate fountain, the cube-shaped Verres Castle and Ussel Castle with contemporary exhibitions. And that there are also evidence from Roman times, the amphitheater in Aosta is the most impressive, but not the only example. Detailed information can be found on the website of the Tourist Information Office (see addresses). If you are not a culture freak, but rather a mountain fanatic, who also has all-terrain equipment, look for the “Great Alpine Road Guide” von Denzel for gravelled delicacies; As word has got around in the scene, the Bontadini lift as the highest accessible point in the Alps (3332 meters) is now officially closed.

Literature and maps
Recommended as a travel guide “Piedmont & Aosta Valley” from Michael Muller Verlag for 19.90 euros. A suitable road map is “Italy 1, Piedmont – Aosta Valley” by Marco Polo on a scale of 1: 200000 for 8.50 euros.