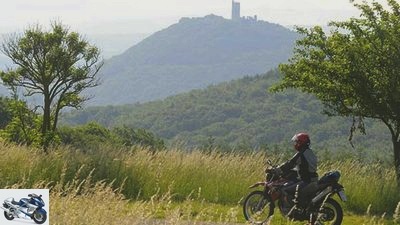 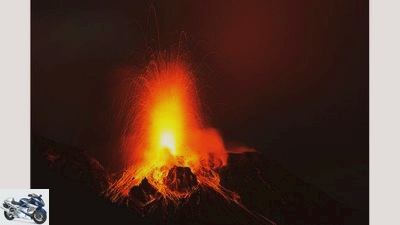 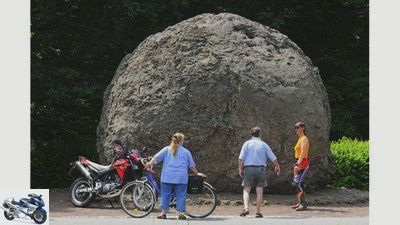 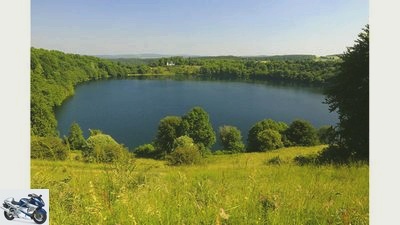 3/11
The Schalkenmehrer Maar near Daun is one of several crater lakes in the area. Swimming is allowed. 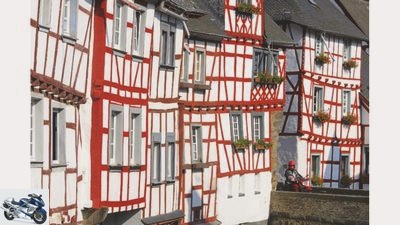 4/11
Monreal is one of the most beautiful Eifel villages. 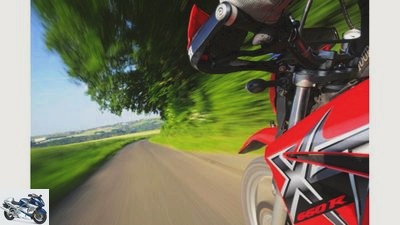 5/11
In the Eifel you drive through curves as if in a frenzy. 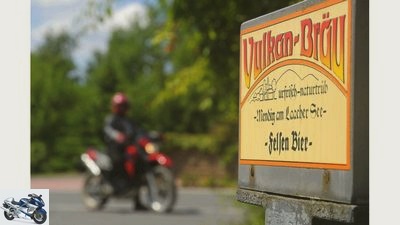 6/11
Volcanic traces can be found everywhere in everyday life in the Eifel. 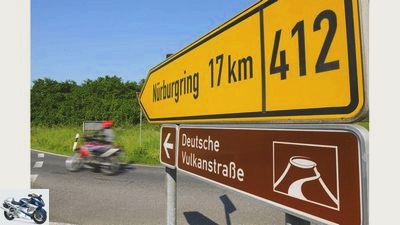 7/11
In addition to volcanoes, curves and motorsport dominate the Eifel. 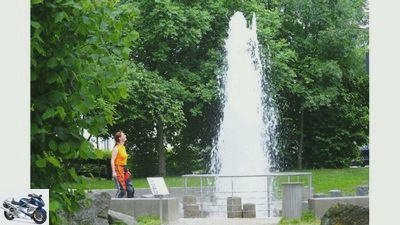 8/11
The fuel of the Wallenborn geyser “Hubbub” is carbon dioxide, not heat. 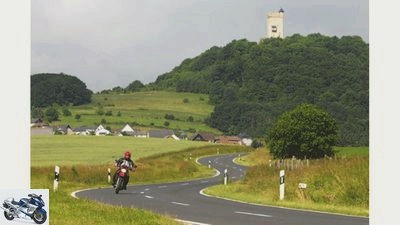 9/11
The last volcano erupted in Germany 11,000 years ago, leaving behind a wonderful landscape. MOTORRAD went on the trail of the eruption in the Eifel and found something worth seeing. Here Ohlbruck Castle near Niederzissen, which stands on a volcanic cone. 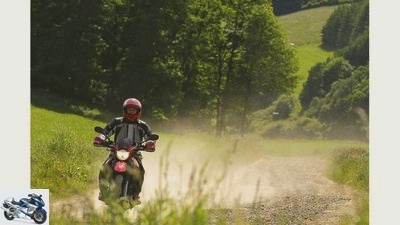 10/11
Beautiful reality in the Eifel: secret gravel passages or detours on the smallest streets without traffic. 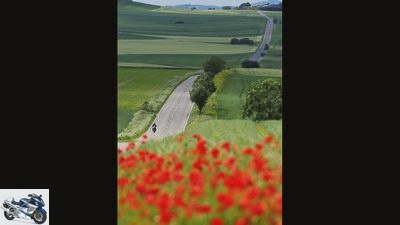 11/11
The landscape of the Eifel inspires with its raw charm.

Out and about on the volcanic road of the Eifel

On the way: Vulkaneifel
Out and about on the Eifel volcano road

The last time a volcano erupted in Germany was 11,000 years ago. In the middle of the Eifel. The traces of the huge eruptions can still be clearly seen on a tour along the German Volcano Road.

The disaster began harmlessly, invisibly and underground. Magma rose from the earth’s interior for months. Until the 1200 degrees hot liquid rock hit groundwater, which suddenly evaporated. A huge explosion tore open the earth, ashes, pumice stone and lava hurled out of the brand new crater. Iceland in April 2010? Not at all, because the eruption of Eyjafjallajokull was only a slight gas compared to the inferno that broke out in the Eifel a good 11,000 years ago.

The volcano drove its ash cloud 30 kilometers high into the atmosphere, even in Sweden and Italy it rained black powder. The lava rolled down to the Rhine, dammed the river into a 40 kilometer long lake, until the water power was so strong that it broke through the scorching dam. The tidal wave sloshed into the North Sea. After two weeks of continuous fire, the magma chamber was empty, it collapsed and filled with water, the birth of the Laacher See. Today the German Volcano Road begins here, which provides a surprising insight into the history of the Eifel over a length of 280 kilometers.

On the way: Vulkaneifel
Out and about on the volcanic road of the Eifel

We start the XT on the shores of the Laacher See, where sailboats rush across the water in an adventurous slope, and roll to Mendig. Many houses in the small town are built from basalt lava, the black gold of the Eifel. The lava is still extracted in quarries, used as hard basalt for houses and paving, or as porous foam lava to stabilize foundations. The local breweries also knew how to use the lava; they stored their beer for a long time in underground basalt caves at a constantly low temperature.

Around Mendig, the traces of volcanism can hardly be overlooked, be it the old, lush mountains of fire like the Krufter oven, the 50-meter-high Wingbertsbergwand made of pumice and ash or the long-abandoned quarries near Ettringen. Today climbers are climbing up the smooth, vertical basalt columns, finding routes up to the upper levels of difficulty, a unique and extraordinary training area.

Nothing for me, I’d rather let the XT climb over the hills. South of Mendig, the landscape loses its volcanic character, the road lays dead straight into the gentle waves of the Maifeld. A few white clouds are sailing westwards, the strong wind brings movement into the glowing poppy fields. Time to cruise, time to dream, of course about spectacular volcanic eruptions. The places in the Maifeld have little worth seeing, their simple construction testifies to the lack of prosperity in the 19th century. 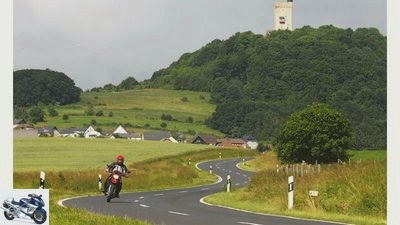 Ohlbruck Castle near Niederzissen, which stands on a volcanic cone.

At least the place names are original: Ochtendung, Ruber, Mertloch and Alzheimer. But then, after a couple of adrenaline-filled corners, Monreal. Off the volcano road, but definitely worth a visit. Wonderful red and white half-timbered houses, the oldest have been in the framework for about 500 years, right on the banks of the Elz. And two medieval castle ruins high above the town.

We stay on the bumpy country road to Ulmen, the site of the last German volcanic eruption long ago. The eruption could not keep up with the force of the Laacher See explosion, but at least it created the Ulmener Maar. The maars are known as the blue eyes of the Eifel, there are 75, eight of which are water-filled. At Daun we can admire three right next to each other, the Gemundener, Schalkenmehrer and Weinfelder Maar. Circular lakes, framed by green crater walls. A sightseeing flight from the nearby airfield promises the most exciting look at the blue eyes. Today, however, no plane takes off, it is too windy. It’s a shame the XT can’t fly.

Then we stay down to earth and swing south to the Strohn lava bomb. Lava bomb – that sounds dramatically like the war of the volcanoes. In fact, we read about spindle bombs, breadcrust bombs and cylinder bombs on the information board. The giant stone soccer ball has a diameter of six meters and weighs 120 tons, but it was created quite harmlessly, collecting ashes and stones like a snowball as it rolled down a mountain until it simply stayed where it was. Amazing how creative volcanoes can be and what they do with the landscape.

We stay true to our mix of driving fun and volcanic surprises, looking for the small, winding roads, often decorated with generations of tar patches as is typical of the Eifel, and whizzing to the next attraction. How about a geyser in the middle of the Eifel? If we previously thought that geysers were a specialty of Iceland or Yellowstone, the travel guide now brings us to Wallenborn geyser, the Brubbel. The Brubbel can’t keep up with its famous namesake, but at least it regularly splashes up to four meters high. However, fuel is not the volcanic heat underground, but carbon dioxide. Sweet Brubbel even has a big brother. At Andernach am Rhein, the world’s largest cold water geyser jumps up to 60 meters high. It is also fueled by carbon dioxide.

We keep mumbling, enjoying the perfect summer day and the almost traffic-free side streets of the Eifel. We know most of them by heart from countless day trips. After all, those who live in the Eifel have one of the best motorcycle areas right on their doorstep. It is all the more astonishing that so far we have mostly driven past the traces of the hot era without a clue. Only the volcano guide opens your eyes to the details along the way. 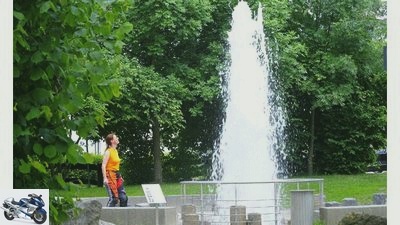 The fuel of the Wallenborn geyser “Hubbub” is carbon dioxide, not heat.

Shortly after Pelm, we suddenly think we are discovering an active volcano. Black smoke stands over the forest, but it is moving strangely fast. A traveling volcano? Something like that, because fire and water provide a lot of steam here, too, but not in the crater but in the boiler of 52 6106. Every Wednesday the old freight steam locomotive of the Vulkaneifel Museum Railway thunders with its wagons from Gerolstein to Ulmen. A visual and acoustic treat. The pompous visual appearance of the amusement park at the Nurburgring, which was concreted to the legendary racetrack with extremely dubious financing, is less successful. On weekdays there are dead pants here, only on the Nordschleife do test drivers do their laps in automotive prototypes, sounding out the limits of tires, engines and chassis.

We can still hear the screeching of the tires as we climb the summit tower of the Hohe Acht, at 747 meters the highest of all the Eifel mountains. The view is awesome. We even discover the tops of Cologne Cathedral. And many of the 350 Eifel volcanoes. Wouldn’t be bad if one of them broke out now. An absurd thought? Not at all, because geologists have long since agreed that the Eifel volcanoes only allow themselves a break. The earth’s crust is much thinner here than anywhere else. And just one kilometer below the Laacher See, the ground is almost 70 degrees, a clear sign of magma in the depths. So it is almost logical that the geologist Ulrich Schreiber expects another fireworks display from the University of Duisburg: “Maybe it won’t start for thousands of years. Or in a few years.” In any case, it simmers permanently under the Eifel earth crust. But volcanoes have a long breath: the pause before the last eruption of the Laacher See volcano lasted 100,000 years. It is by no means possible to rely on the fact that it will take so long again. So until the next outbreak, drive as much motorcycle as possible on the winding Eifel streets… 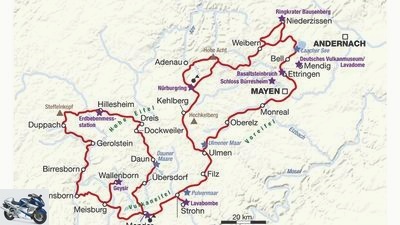 Travel time: one to three days – Distance covered: around 300 kilometers.

These are just a few of the many reasons for a trip to the Eifel: roads with little traffic, the Nurburgring, castles, varied landscapes and traces of explosive volcanic activity.

Geology:
Volcanism in the Eifel has existed for around 40 million years. The last eruption phase, in which the maars also formed, began 30,000 years ago. The eruption under the Laacher See was the strongest, producing about as much volcanic material as the eruption of the Philippines volcano Pinatubo in 1991, the most powerful explosion of the 20th century. Only in the last two decades have researchers devoted themselves more intensively to the Eifel volcanoes and located a so-called plume under the Eifel, a bubble of hot rock, a sure sign of a magma chamber deep in the earth. The conclusion from this discovery is clear to the geologists: The Eifel volcanoes are by no means extinguished, but only rest, only to erupt one day again. However, when and where this will happen is impossible to predict. From a geological point of view, the period of rest is only a moment since the last eruption around 11,000 years ago.

The route:
The German Volcanic Road is around 280 kilometers long and has been connecting 39 remarkable testimonies of volcanism for four years. It leads to the scenes of the hot era as well as to exhibitions and museums. As interesting as the volcanic history of the Eifel is, the motorcycle tour is worthwhile even without this topic, because the Eifel roads are wonderful. Arrival via the A61 to the Mendig exit. Information at www.deutsche-vulkanstrasse.com.

Worth seeing:
The lava dome in Mendig offers the best insight into the volcanism of the Eifel. The exhibition, information center, museum and multimedia show get in the mood for the hot topic. Open daily except Mondays, admission 6.50 euros, www.lava-dome.de There are further information points in the Niederzissen town hall and in the center of the Rauschermuhle volcano park: www.vulkanpark.com, www.geopark-vulkaneifel.de. Also worth a visit are the volcano museum in Daun (www.eifel-vulkanmuseum.de), the Maarmuseum Manderscheid, the lava cellar in Mendig, the Bausenberg ring crater near Niederzissen, the Meerfelder Maar, the geyser near Andernach, the Benedictine abbey Maria Laach and the volcano house in Strohn. Motorsport enthusiasts naturally head for the Nurburgring.

Literature:
Compact and informative: German Vulkanstrasse travel guide, Gorres-Verlag, 12.80 euros. 250 pages of everything you need to know along the road. Together with the “Geotourist Map National Geopark Vulkanland Eifel” on a scale of 1: 100,000, all destinations can be found safely.