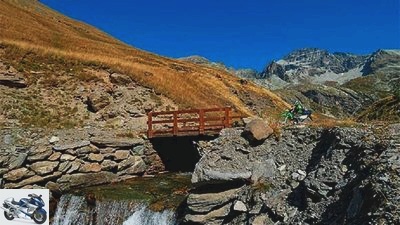 On the way: Hautes Alpes / Piemont (with GPS route)
Off-road excursion to the Italian-French border area

That is unearthly!” Ronny looks impressed. At 3050 meters above sea level, when we arrived at the highest point of our tour, huge rock formations dominate the small high plateau. The fact that we have one foot in Sarkozy State and the other on Berlusconi’s stage, that the Italian gravel road is named after a French engineer, is just as irrelevant at this moment as the two 250cc Enduros with which we are currently on the Colle Sommeiller have conquered.

The overture: quarter to
“Can you really travel seriously with a 250cc??” Visibly amused, the BMW driver at the Hegau autobahn petrol station looks at the delicate R 1200 GS Adventure, which is not only decorated with aluminum suitcases Yamaha WR 250 R. I could tell you about relaxed cruising in the right lane at a speed of 120, could mention that after driving 100 kilometers, only three and a half liters of fuel passed the injection nozzles, could add that the narrow seat does not fold in even after eight hours of driving the buttocks (additionally padded with cycling shorts) or that the backpack and roll offer enough space for the (necessary) luggage. Instead, I continue the two-day foreplay, which has been adapted to the 250cc: I arrive in Lanslebourg at the same time as Ronny, his Kawasaki KLX 250 put in the van, took the direct route and covered 728 kilometers from Baden to the Maurienne valley in seven hours.

On the way: Hautes Alpes / Piemont (with GPS route)
Off-road excursion to the Italian-French border area

The first act: gravel for beginners
With a cafe au lait and chocolate croissants in our stomachs, we start the Kawa and the Yamaha on a cool Sunday morning. Getting there and everyday life are forgotten for the first few kilometers towards Lac de Mont Cenis. Curve by curve, confidence in the grip of the cleat profiles grows, and with each serpentine we focus better on the ultra-sharp handling of the two motorized mountain bikes. Big arches? Nothing there, we head straight for the inside of the curve, push the enduros in and then give full throttle again: the sheer lightness of being on two wheels.

We will warm up on the way to the 2167 meter high Colle delle Finestre at the latest. Short straights, tight hairpin bends and a 50 percent share of gravel ensure high spirits. Bella Italia: With the approval of the authorities, you can still accelerate on many off-road slopes (despite some route closures). As on the “Strada dellAssietta”, which even advertises its own website. With success, because on the more than 40 kilometers between the Colle delle Finestre and Sestriere we encounter hikers, mountain bikers and a scattered racing cyclist, dust us with XTs, Africa Twins, GS, quads, but also scattered small cars.

Heavy construction machinery shows that the former military road is being kept in a passable condition. It lines up the 2000 peaks like the peaks of a ridge: Colle and Testa dell’Assietta, Colle di Lauson, Colle Blegier, Monte Genevris, Colle Costa Plana, Colle Bourget, Colle Basset and Colle di Sestriere. From which even inexperienced Assietta day trippers benefit, at least as long as no rain falls and the surface does not take on the consistency of soft soap. 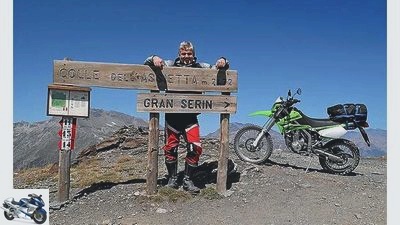 The second act: Descent and tunnel vision
For years I carelessly rushed past the small, inconspicuous sign in La Condamine de Chatelard: Tunnel du Parpaillon. At this moment just a guide, hours later an experience, forever linked to memories in 3D. A few kilometers of asphalt, a bumpy passage through a forest, and the curtain rises for the second off-road act.

The stage in front of us is grandiose: to the left and right, mountains tower up, covered with brown turf thirsting for water and bare, gray ridges under a steady blue sky. We are the only motorcyclists who screw our way up the dusty gravel road to an altitude of 2632 meters. The imposing staging of the natural scenery, the loneliness, the unknown pass and the light-heartedness with which the 250s even plow through loose gravel and rock ground into fine dust make every meter an experience. Including the 500-meter-long, pitch-dark tunnel with its parquet made of puddles lined up in a row. On the other hand, only a few grazing cows notice us. In contrast to the quiet Parpaillon, the Assietta looks like a lively Italian market square in retrospect.

The entrance to Lac de Leuzet, 25 kilometers away, can only be found by those who seek it intentionally and, for example, in “Denzel leafed through the bible for alpine tourers. 16 kilometers of fascination are offered, the full range of narrow asphalt bends, forest and meadow paths, upbeat steep sections and small and large rocks as well as a small mountain lake caressed by the last rays of the setting sun.

The third act: aim high
The last day starts with a tip: Cedric, the personable owner of the hostel “Gîte le Passe Montagne” in Chantemerle, tells us about the possibility of approaching gravel roads from the nearby Col de Granon from Nevache. A seductive thought, the blemish of which is only revealed to us at the top of the Col: The military road that starts from the large parking lot for hikers is disfigured with a clearly visible prohibition sign. A strolling soldier smiles mischievously as he walks by “You just can’t get caught” with on the way. So in second gear we toddle along the mountain flank with all due restraint, promptly miss the junction and end up on a hiking trail of the Maultierpfad brand. “Non, non, impossible, you can’t go any further here”, means to us a French couple who come to meet us. Instead of the expected sermon, we receive friendly helpfulness. We are willingly shown the way to Granon with the help of a hiking map. “Mais oui, you can take it, our son also rides it on his mountain bike.

“Below the Col de lEchelle we pass the border to Italy and follow the signs to Rochemolles in Bardonecchia. The adrenaline level rises, ahead of us are 23 kilometers, two thirds of which are unpaved, 2000 meters of altitude and a 3050 meter high destination. But numbers cannot even remotely reflect the dimensions of the Colle Sommeiller. It’s a never-ending endorphin trip into the high mountains that pushes the climax out again and again. Whenever you think you have already reached your destination, the mouse-gray mogul slope has an encore in store. High valley follows high valley, bend after bend, walls pile up, from which water fountains fall into the depths, while the tunnel tires in the powdery serpentines above the Refugia Scarfiotti stir up mighty fountains of dust. The air becomes noticeably thinner, but with the decreasing oxygen content, the fun on the summit only increases. The Colle Sommeiller is the highlight of the three-day border traffic and the accolade for the little enduros, who never overwhelmed us and therefore gave us constant pleasure. And reminded of a time when the gray rag was still stuck in the Belstaff jacket like a freshly starched shirt collar and the importance of displacement and power was inversely related to the size of passion.

epilogue
As we leave the parking lot on the Sommeiller, a sweat-soaked GS rider puts his BMW on the side stand and breathes heavily. I hold back the question of whether you can really seriously ride Enduro with the fat German. 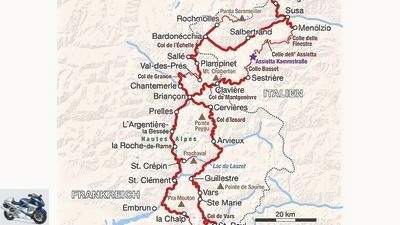 Worth seeing:
The region between the Maurienne Valley in the north and the Mercantour National Park in the south is one of the most famous curve meccas for alpine tourers. It is not for nothing that passes such as Col de l’Iseran, Col du Galibier, Col du Lautaret or Col d’Izoard are regularly included in the stage plans of the Tour de France. The much slower and at the same time quieter alternative to immersing yourself in the high mountain world between Hochdauphine and Hochprovence are many gravel roads that are still legally passable, mostly former military roads. A driving style that is adapted to the sensitive nature of the vehicle goes without saying, even if there is no need to provide any arguments for further closures. In dry conditions, the routes presented can also be tackled stress-free with heavier enduro bikes, but caution is advised when it is wet.

motorcycles:
Even if long stretches of motorway are not the strength of the Kawasaki KLX 250 and the Yamaha WR 250 R, both turn out to be absolute fun bikes in the Alps, especially off-road. Even more difficult passages can be mastered well on the handlebars of the lightweight. A range of 200 kilometers is more than enough, but you should reduce your luggage as much as possible. We have had good experience with the robust 32-liter backpack “Skull” (79.95 euros) and the 50-liter trekking roll (29.95 euros) made by Louis.

Stay:
The starting point is the Hotel La Cle des Champs in Lanslebourg, phone 00 33/4/79 05 94 10, www.hotel-lacledeschamps.com. If you arrive by car / van, you can park your vehicle here without any problems. The Hotel Les Barnières is five minutes’ walk from the center of Guillestre, phone 00 33/4/92 45 05 07, www.hotel-lesbarnieres.com. A simple but charming hostel is Gîte le Passe Montagne, run by a young family, phone 00 33/4/92 24 06 66, www.gite-lepassemontagne.com in Serre-Chevalier, not far from Briançon. It is advisable to reserve a room here even in the off-season.

Addresses / cards:
The starting point for planning alpine tours, whether on asphalt or unpaved roads, is the 624-page Bible “Great Alpine Road Guide” by Harald Denzel, the 24th edition of which is now available. On the Internet at http://alpenrouten.de there is information on 1601 Alpine passes, approachable peaks, high points and high valleys, including GPS data and current comments. You can find out which slopes in the vicinity of Bardonecchia are accessible at www.bardonecchia.it (News / Z (ona) T (urista) L (ibero) Montana). The Colle Sommeiller, for example, is closed from July 1 to August 31, Friday to Sunday between 9 a.m. and 5 p.m. There is a separate website for Strada dell’Assietta: www.stradadellassietta.it. The popular Kammstrabe is also temporarily closed in July and August, on Wednesdays and Saturdays from 9:00 a.m. to 5:00 p.m. Maps: Michelin 333 Isère, Savoie and 334 Alpes-de-Haute-Provence, Hautes Alpes, both on a scale of 1: 150,000. Map: Claudia Werel / MAIRDUMONT