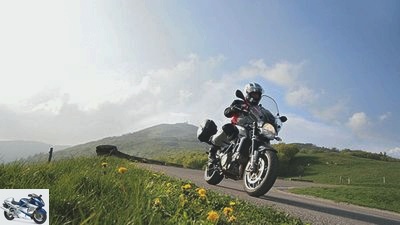 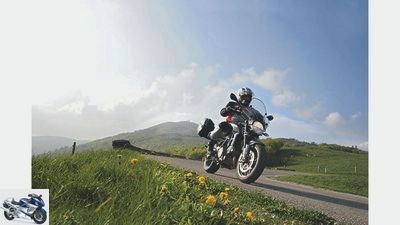 1/14
Why always go to the Alps? The closer Alsace in France also offers beautiful landscapes and winding roads that don’t have to hide. 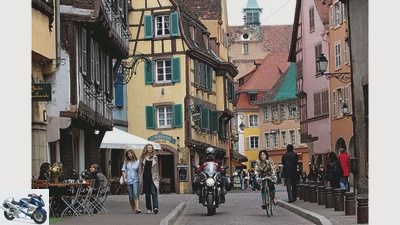 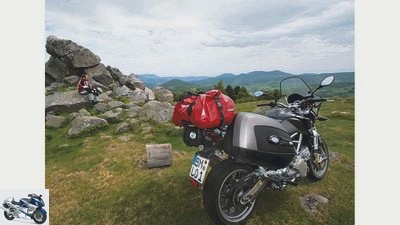 3/14
The wild Alsace heights in front of Munster invite you to take a break and look at everything in peace. 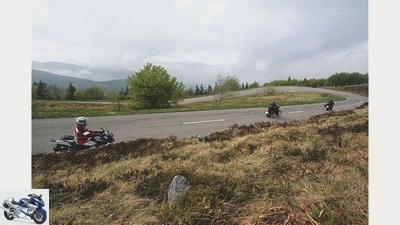 4/14
Eating curves on the Grand Ballon, one of the many mountains in Alsace. 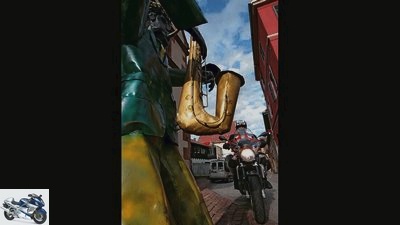 5/14
Munster: Not only storks and cheese, but also art is loved. 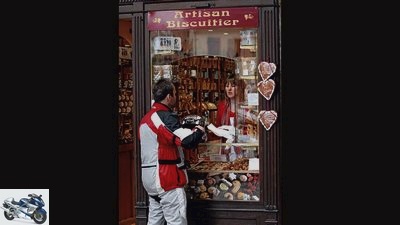 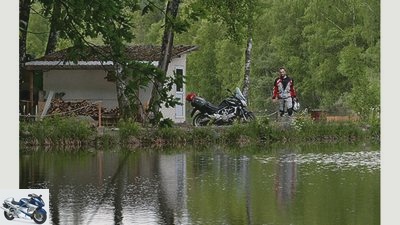 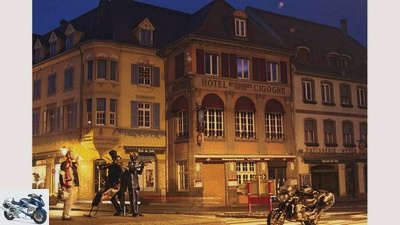 8/14
The basis for sparkling pleasure in curves: Hôtel de la Cigogne in Munster. 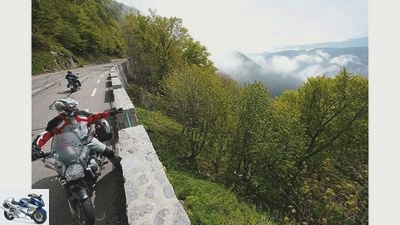 9/14
Col panorama between the gorge and Hohneck. 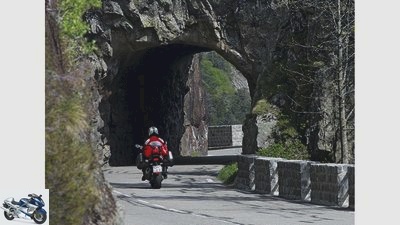 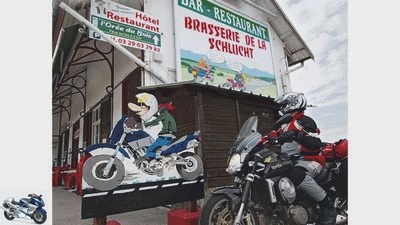 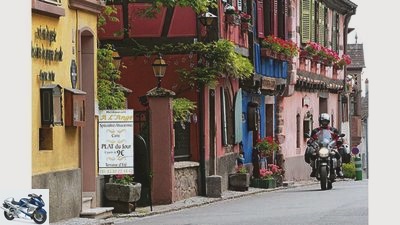 12/14
Obermorschwihr is a typical Alsatian place with good restaurants. 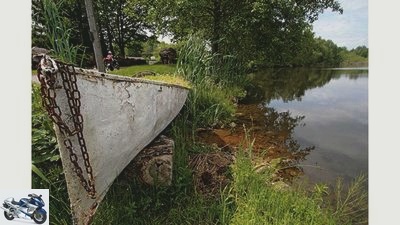 13/14
At the same time you find yourself back in the idyll of a thousand lakes. 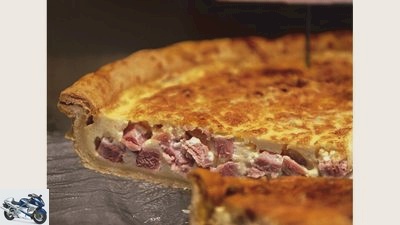 14/14
Like God in France: enjoy intact nature and culinary delights.

If you can’t make it into the Alps, Col du Bonhomme, Col de la Schlucht, Grand Ballon and other peaks in nearby Alsace promise pure cornering happiness. In addition: Flammkuchen at its finest and a wildness that can only be explored by bike.

Weather-beaten face, blue eyes, blond curls clinging to the skull. It is not sweat that drips from the pores, but gasoline. That’s how Steve stands before us. Behind them his seven buddies in oil-smeared leather, all of whom thundered from England to Munster in Alsace with toothbrushes and credit cards. The members of the British Aprilia Club point to our Aprilia Mana, who shyly ducks between refined RSV and Tuono. “How is the automatic transmission?” We try to pack 700 kilometers of mana experience into two minutes of speech. As the British start their two-cylinder engines, the conversation revolves around curves. It is agreed that Munster in Upper Alsace, famous for its soft cheese, is the best base for dynamic wandering over the mountain ranges of the Vosges.

A rattle reaches our ears. Valves? No, a stork colony has resided in Munster for over 30 years. The Adebare are not disturbed by the rumbling of the departing Italo-Boliden. Steve closes his helmet and says the Aprilia Club England has 1,000 members. The guys regularly pop through Europe and want at least some comfort for the nights.

This is how they came across the long-established Hotel la Cigogne (Zum Storchen). The menu features a sparkling Rose d‘Alsace Turckheim, an excellent tarte flambee with Munster cheese and the best creme brulee in Eastern France. Inspired by such pleasures, Claudia and I recapitulate our previous route: After a stroll through the picturesque old town of Colmar, we discovered the D 11, which meanders steeply to Les Trois Epis and on to Orbey. There the D 48 and the banks of Lac Noir and Lac Blanc, both lakes embedded in wild mountains, beckon. It goes without saying that we paid a visit to the Col du Bonhomme, just to see what motorbikes are there. 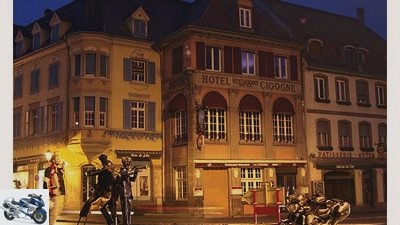 The basis for sparkling pleasure in curves: Hôtel de la Cigogne in Munster.

Via one of several Routes des Crêtes (D 148, D 61), the Aprilia then pulled us over rough altitudes and moss-covered forests directly to the Col de la Schlucht, where a swarm of motorcycles could be seen cornering. On the way into the valley we slipped past lush cows. The raw material des is stored in their udders “Munsterkas”, which is made from raw milk and is now slightly melted into an intimate connection with the tarte flambee.

Anyone staying at the Hotel la Cigogne should like the clatter of storks. The tower on the south side of the Place du Marche serves as a nesting place, as does the roof of the neighboring former bishop’s palace. The animals live in their own world up here, they are just as uninterested in traffic noise as they are in sub-zero temperatures or heat.

This prevails the next day on our course, which leads in a serpentine direction towards the Grand Ballon. The small D 40 winds over the Col du Firstplan, then into the vineyards and small wine villages such as Voegtlinshoffen or Gueberschwihr. The life of the people revolves around the production of wine, one cares about the welfare of the still young vines. The soil is well drained, builds up on lime-rich conglomerates and marl from the Rhine Graben and produces aromatic Gewurztraminer, Riesling or Muscat wines. At some courtyard entrances, watchdogs practice calf snapping. 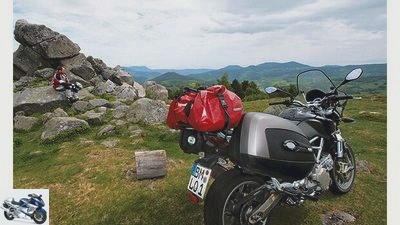 The wild Alsace heights in front of Munster invite you to take a break and look at everything in peace.

The Aprilia sniffs out the tiniest of streets, soon it is rolling again on the D 40, this time via Soultzmatt to Lautenbach. A piece of the D 430, then D5 and the ascent to the highest peak in the Vosges at 1424 meters, the great Belchen (Grand Ballon), a challenge for racing cyclists. The balloon protrudes like a gigantic bald head from the surrounding forest. On the bald head a hotel, a restaurant and a radar station that helps aircraft approach Basel and Strasbourg. There is also a memorial. It is reminiscent of that “Diables bleus”, the “Blue devil”, an elite French mountaineering battalion that fought here in World War I..

Memorials from this war already accompany the ascent to the balloon. The Hartmannswillerkopf rises to the right of the street, too “Man eater” called because it was fought for as the eastern summit of the Vosges, especially in the winter of 1915. On the left the Col du Silberloch with the Monument National, a memorial that contains the bones of 12,000 soldiers.

Finally: emerge from the jungle-like green and in the last bends draw furrows in the asphalt again, then the summit. In the distant past, this was the place of worship of a Celtic sun god named Bel, who gave the mountain his name. His spirit is still there: the sun sends apocalyptic rays through black banks of clouds, it thunders.

So better accelerate and keep going. The Route des Crêtes leads in a north-westerly direction and after seven kilometers of tire-eating asphalt snakes reaches the Markstein, a matt-covered saddle with a beautiful view. Then the mana rushes downhill in wild loops. Cyclists come towards us and remind us of the 1997 Tour de France drama, when Jan Ullrich, who had a cold, struggled on the balloon and had to let his adversary Richard Virusque go. Teammate Udo Bolts is said to have yelled at Ullrich at the time: “Torment you, you pig.” Which he then took to heart until his triumph on the Champs-Elysees. 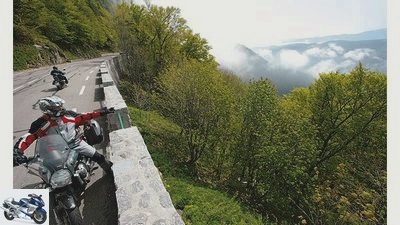 Col panorama between the gorge and Hohneck.

Our sense of achievement is again the Col de la Schlucht and its brother, the Hohneck. A breathtaking panorama, especially the view of the Lac de Longemer. The restaurant on the Hohneck summit serves as a fixed point for entire BMW squadrons.

The Vosges heights appear rough, like Scottish high moors. Rusted lifts stand around like a skeleton. The touristically souped-up ski resorts of La Bresse and Geradmer radiate melancholy in summer, after all you can still hike or paraglide from here. Or wagging up passes like the Col du Haut de la Côte on a motorcycle and following white streets into nowhere.

Curiosity drives us across the Col des Croix towards the Plateau des Mille etangs, the area of ​​1000 lakes. Forest areas are thinning, mountains are becoming flatter, houses are poorer. We roam the lake area on the smallest of roads after we have felt our way from Melisey to La Lanterne et-les-Armonts. A Moselle glacier reshaped the southwestern edge of the Vosges 12,000 years ago. After it melted, it left behind countless streams, peat bogs and wild vegetation. The mana slips, we throw the head left and right. Large, small, dark, light lakes, hidden or open, raise the question of how they were created. The owner of the campsite in Fresse reports that in the Middle Ages monks dug numerous fish ponds in the damp depressions. Since then, the area has been providing horror stories due to the haze that rises from the ponds and the self-distilled that fog the brain.

We are reluctant to leave this treasure of the Southern Vosges, which has not yet been discovered by tourism, and drift further south until we reach another gem: the Notre Dame du Haut de Ronchamp church on the Bourlemont hill near Ronchamp, built in 1955 by the star architect Le Corbusier. It could go on forever with corner robbery and discovery, but unfortunately we have to go back to the hamster wheel of everyday desk life. But we are still here and are looking forward to the beautiful cols and balloons that spice up our return route. Speaking of seasoning: You can’t just rush past the Tarte flambee Munster, even in a northerly direction. 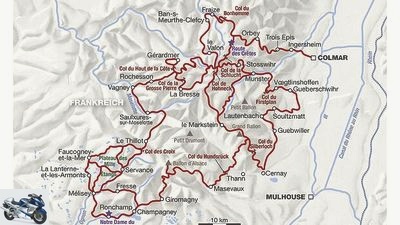 Arrival / travel time:
Coming from the north, you can already familiarize yourself with the region at Wissembourg, otherwise the entire A 5 from Baden-Baden to Basel is a good eastern entry line. Colmar offers the fastest connection to Munster, which is ideal as a base for exploring Alsace and Vosges. In contrast to the climatically not so harsh Black Forest, the ridge roads are not cleared of snow in winter, so that the first tours over the “Route de Crêtes”, which runs on the west side of the Vosges ridge just below the summit, can only be undertaken in spring from around mid-April. In autumn, due to the weather, the curtain often falls towards the end of November for a hearty Vosges tour.