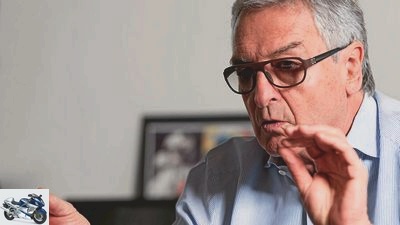 Interview: Lino Dainese
“I want to measure the adrenaline”

Who invented it? No, for once not the Swiss. Rather, the protectors for motorcyclists come from Italy, from Dainese. Now the company wants to set standards again: with the airbag for motorcycles and a new type of helmet from sister company AGV. An interview with Lino Dainese, the man behind the two renowned brands.

? You have been making protective clothing for 41 years. In your opinion, how has motorcycling changed during this time?

Interview: Lino Dainese
“I want to measure the adrenaline”

! The motorcycles have become much safer, but also much faster. Clothing has changed accordingly. At the beginning of the 1970s, when I started in the industry, full-face helmets were only just emerging, today they are a matter of course. Likewise, most of them now wear a complete suit, not just a leather jacket and jeans like back then. But driving itself has basically not changed. The joy in it has stayed the same, at least for me. The experience of motorcycling was just as intense on my first big trip to London at the age of 18 as on the alpine tour to Zermatt, which I did last.

? But the motorcyclists themselves have changed a lot.

! Yes, that’s right. In the past it was the boys who were enthusiastic about the motorcycle, but now they have different interests. Today, most of the motorcyclists you see while traveling have gray or white hair – or they don’t have any more. But the boys will come back, I’m sure of that. A motorcycle conveys a completely different freedom than this sardine can from a car. We’ll probably need a different type of motorcycle. In my opinion, high-horsepower sports machines have no future because it has simply become too dangerous on the road, and a scooter does not convey the spirit of discovery. Maybe we need to go back to the types of motorcycles that have fascinated us. In any case, I was enthusiastic about my Bultaco Matador, actually a pretty simple motorcycle that you could ride on as well as off the asphalt roads. But I can’t decide what new, really exciting models might come up, after all, I’m not a motorcycle manufacturer.

? But a major clothing manufacturer. What is the most important innovation for you in the last few decades??

! Of course, that the protective function has improved so enormously. For our two companies, Dainese and AGV, safety always comes first, then comfort, and only then comes design. But if you ask me personally: I’m particularly pleased that modern clothing protects so well against moisture, because I like driving in the rain, as unbelievable as that may sound. You have to drive very harmoniously on wet roads, rely entirely on yourself and the motorcycle, practically become one with it. If you get wet feet and cold hands and an icy drop trickles down your back, it’s of course no fun. With the right clothing, however, it is. On my last alpine tour from Jaufen over the Reschen Pass to St. Moritz, I was out and about in continuous rain, and I enjoyed every moment.

!(smiles) Yes, adrenaline is something that has been on my mind for 20 years. We are always on the lookout for innovations when it comes to protective functions, and that’s where you come up with unusual ideas. In critical situations, the adrenaline level rises suddenly, as every motorcyclist knows. Therefore, in my opinion, this would be a good indicator to trigger protective functions that are in clothing. And that’s exactly why I want to measure the adrenaline in these moments. Unfortunately, this does not work out the way it would be necessary for these purposes. With our airbag for motorcyclists, we used other means, namely a complex algorithm that processes the information from various sensors on the motorcycle and on the clothing and then triggers the airbag. That works very well, as various tests have shown and the TuV certifies us with a seal of approval.

? But motorcyclists still don’t seem to really warm up to the airbag. Does that disappoint you?

! But no, not at all, that’s normal. Motorcyclists tend to be conservative, it takes time for a new idea to convince them. We know that from the back protector, nobody wanted it back then, especially not the racing drivers who were under contract with us, neither Kenny Roberts nor Freddie Spencer. It wasn’t until Spencer fell on his back while racing in Kyalami that he was finally convinced. From then on there was no more discussion.

? Your airbag is very popular in other areas, such as ski racers. Does that mean Dainese is moving away from the motorcycle industry?

! No, absolutely not. But there are very different uses for the airbag. I recently went to the Massachusetts Institute of Technology (MIT), which we’ve worked with for years. There are station wagons for astronauts, soldiers, elderly people, all with our airbag functions. Soldiers can be better protected in the event of explosions, and an airbag in a training suit can prevent older people from breaking their bones in the event of a fall. And then there are of course the skiers, a very dynamic sport, where falls can be as dangerous as when riding a motorcycle, and then there are also the mountain bikers. We are working on all of these projects, for which of course you have to modify the airbag. But the basis is always that it triggers so quickly, namely in a few milliseconds. And I am delighted that people from other industries who previously viewed us motorcyclists as crazy are now coming to us to learn from us. 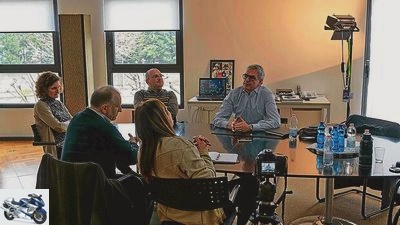 Discussion in Vicenza: Federica Marti, Vittorio Cafaggi and Lino Dainese (from left, all Dainese), in the foreground Michael Pfeiffer and Eva Breutel (MOTORRAD).

? What can the station wagon of the future look like??

! We will move away from the station wagons, which are based on the armor of the Middle Ages and provide good protection, but are also stiff and heavy. For me, the future is in the air, like with the airbag. It weighs nothing and protects better and faster than anything else. Of course, it would be best if you could ride a motorcycle in your normal clothes, with built-in protection that only unfolds when you need it. The same applies to helmets: At our company AGV, we are thinking about ways of replacing the styrofoam inside the helmet with air. That would be an enormous weight saving. Difficult to implement, of course, but also a real challenge. And without them, research would only be half as fun.

? With AGV you have just launched a helmet on the market that is smaller and lighter than comparable predecessor models and that you are promoting as an innovation.

! The new thing about the helmet is that we have developed it from the inside out, different from what has been done before. When it comes to helmets or station wagons, everyone thinks of the external shape, even car designers do it this way: They first develop the shape, then people will somehow fit into the vehicle. We do it the other way around: We start with the person, with the shape of the body and head, and then develop outwards. It’s actually very easy. The shape should adapt to the person, not the other way around.

? Finally, a personal question: Many company bosses in the motorcycle industry are always the focus, giving numerous interviews. On the other hand, you rarely see or hear them. Why is that?

! I enjoy talking about the whole company, about the helmets, station wagons and technologies, and about the employees – my fellow travelers, as I call them. I’m rather embarrassed when I have to tell you how great we have worked here or there. I really enjoy going into our stores and watching people try on and try our products because then I see that they are actually useful. The customers are most important to me, they are friends to whom I give the best that I have to offer – because you don’t cheat friends. 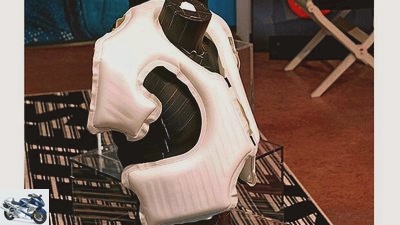 High-tech: Air is said to play an increasingly important role in Dainese products, such as the airbag for motorcyclists here.

Lino Dainese, born in 1948, founded his clothing company of the same name in 1972 in Molvena, near Vicenza in northern Italy. The first products were two brightly colored lederhosen, one for cross and one for road riders – revolutionary, because until then motorcyclists practically only wore black. Dainese quickly recognized the importance of popular advertising media and, as early as 1975, signed a sponsorship agreement with Italy’s most legendary racing driver, Giacomo Agostini. Five years later Dainese built the first anatomically shaped station wagon, the first knee slider came in 1982, followed shortly afterwards by the back protector, initially only for the racetrack, later also for street suits. The collaboration with the Massachusetts Institute of Technology (MIT) began in 1996 and continues to this day. The most important innovation of the company in recent years is the airbag for motorcyclists, which is available in two different versions: for the racetrack and for the road. The basis is a sophisticated algorithm that processes information from various sensors and triggers the airbag in a few milliseconds (MOTORRAD reported). Further information: www.dainese.com/de_de/d-air/

From leather to carbon 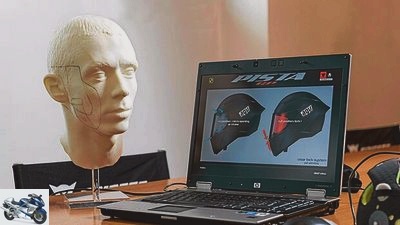 AGV was founded in 1946 by Gino Amisano (1920-2009) in Valenza; the company name consists of the first letters of the founder and the village in Piedmont. First he made leather saddles and seats for scooters and motorcycles, followed a year later by the first helmet made entirely of leather; the production was limited to five pieces per week because it was completely handcrafted. The first fiberglass helmet came in 1954. In 1967 AGV signed Italy’s national hero Agostini and shortly afterwards introduced the full-face helmet in Italy; the racing drivers fiercely resisted, and Agostini was only persuaded to wear it in 1971. Meanwhile, AGV also built helmets for ski racers and Formula 1, but motorcycling remained the most important. As the sole sponsor, Amisano supported the establishment of Clinica Mobile in 1977, which has since accompanied the motorcycle Grand Prix on race tracks around the world. In 2007, Dainese took over the helmet manufacturer, which had now become the property of a Belgian group. The most important innovations are the Pista GP, Corsa and GT Veloce helmets, which, unlike before, have been developed from the inside out, based on different head shapes. Valentino Rossi was the godfather of the Pista GP racing model. Further information: http://www.agv.com/de