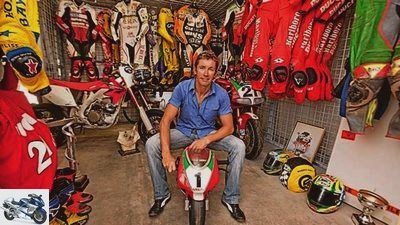 In 2008, three-time Superbike World Champion Troy Bayliss resigned. In 2011 he thought of a comeback, then changed his mind. Bayliss is retired – really? 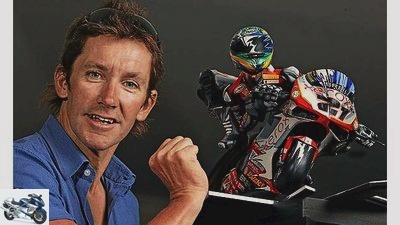 His wrist is still itchy: is Bayliss actually coming back??

The Bayliss property is brightly lit, but no one is there. A handful of workers are buzzing around a half-finished extension, but there is no trace of the landlord. Troy Bayliss shows up 20 minutes later – completely exhausted – and apologizes. He has just finished 150 kilometers on his bike. To my astonished face he says: “I keep myself race-fit, of course?” I would not have expected this. I thought I was coming to Australia’s Gold Coast for an interview with the resigned superbike hero. Now 42 years old, Bayliss hung his leather for the third world title Ducati On the nail in 2008 – at the zenith of his art.

Actually every racer’s dream: to step down at the top. But that’s not that easy at all. Often the very big ones don’t stop until they’re either tired of being hurt or tired of losing. Like Bayliss ?? Compatriot Mick Doohan, who had no choice but to pack the clutter with his battered body in 1999. “If I had stopped with my legs broken, it would have been easy”, Bayliss agrees. But it wasn’t easy. Bayliss announced his comeback last summer when he did some test laps for Ducati with a lap record. But shortly before a contract with Ducati, he stopped everything. Now he is thinking about racing again – for one simple reason: Bayliss is fighting an ongoing inner struggle to ever be able to live without racing.

“I still have my problems with resigning”, he says and shifts restlessly back and forth on the couch. The man is still full of the energy and enthusiasm that made him this dreaded racer. “It’s so damn hard. I will soon be testing the new Ducati for 2012. I already know that if it is really good, it will be terrible for me not to be able to race with it. That’s why I keep myself fit. You never know what’s coming around the next corner.”

“I’m sure I could come back and easily win again. Whatever is on my mind: I quit with one less title than Carl Fogarty and seven fewer race wins than him. I could break these records.” Bayliss will not only be testing Ducati’s new superbike for 2012 very soon, he is also in close contact with Davide Tardozzi, the former Ducati team boss with whom Bayliss won his three world titles. So Bayliss is ready, and Tardozzi would have no problem getting a team together. Ducati would also be ready to provide the troops with top material. “I am as good as ever”, stresses Bayliss. “I could jump on the bike and get started right away.” It’s more than obvious that the man is on fire inside, longing to come back and do what he does best: shock the competition in World Superbike.

There is really only one problem: his promise never to race again. “I originally promised my wife Kim that I would quit at the end of 2006. I worked for a few more years. Then the time had come, the perfect time to come back to Australia with the kids. It’s going great for the family too. I am the problem. I just can’t help myself, I want to win races. That’s inside of me.” 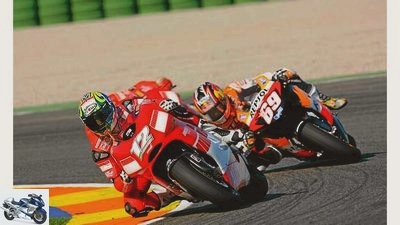 The former teenage dream couple Troy and Kim (married for 18 years) live an almost perfect family life with their three children Mitch (16), Abbey (14) and Ollie (6) in a beautiful house right on the water not far from Surfers Paradise. After years touring the paddock and improvised family business in Monaco, the kids are well integrated in the local school, have made friends and are growing up sheltered. The only problem is actually Bayliss himself. He’s a racing junkie, needs the thrill. His hardest withdrawal is not feeling victory anymore. “I miss that the most”, he admits. “The bad thing is that this feeling of triumph only lasts for a very short time, a day or two. And then you absolutely need it again. Like a bad drug. Of course, I also miss the other things around it: From Thursday to Sunday you are excited and nervous because you have trained hard and the pressure is immense. Then you win and you are in a really good mood for a few hours, you go out to eat and drink a few beers. The morning after, however, you are already thinking about the next race and get ready again.”

Top racing drivers are all like that – they are looking for that intoxication and they are always itching to get more of it. If it weren’t for that, they wouldn’t be at the top. Troy Bayliss now has a few “Substitute drugs” tried for his racing addiction: cars (“Not nearly as cool as motorcycles”) and bicycles (“not fast enough”). the “V8 sheet metal cages” Bayliss got bored pretty quickly in 2009. On the other hand, he takes cycling very seriously. Every week he unwinds at least 500 kilometers. He recently won the Queensland Road Championship for those over 39 years of age. The success had a touch of the kick that Superbike victories gave it: “When I won, it felt pretty much the same”, he laughs. “But after the three-hour drive home there was nothing left of it at home.”

Before his resignation, Bayliss was so afraid of losing his killer instinct and cravings that he blew off a planned sterilization. “I was panicked, I would wave the others over and suddenly like tea”, he grins broadly. “I got the cut three months ago, but I still like my coffee and I’m hungrier than ever for racing.” 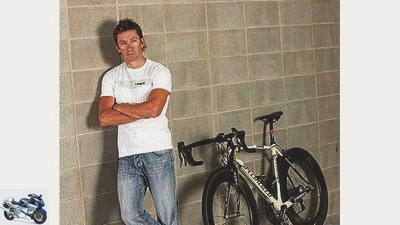 Troy Bayliss covers 500 kilometers per week on his bike.

Interviews with Bayliss have always been great. He is open, can tell interesting stories, is always in a good mood and does not know any airs. It never feels like having an audience with a three-time world champion, more like meeting another biker in the next pub.

There are many reasons why he has remained a perfectly ordinary guy. That Bayliss learned to race the hard way is one of them. Unlike most current top racing drivers, Troy wasn’t a three-cheese-high motorcycle hero sponsored by the Mama and Papa Bank. From the age of ten he drove a little motocross and dirt track – and then stopped. He only started again when he was 23, then on asphalt. No comparison with the other world champions of 2008: MotoGP hero Rossi and 250 champ Simoncelli were real mini moto legends at the age of eleven.

Bayliss bought his first racing motorcycle with his salary as a painter. “This is one of those jobs that can really get you down with all the solvents and stuff. You think that’s it now, this is your life – a perfectly normal situation for so many people.”

The moment that changed his life forever was a trip to the 1992 Australian Grand Prix. “I went to Eastern Creek with a couple of friends who were spinning like mad on their street bikes. We camped, at night I drove dragster races against other weirdos there, without a helmet, and behaved like a complete idiot. That’s when I made the decision that I want to race.” 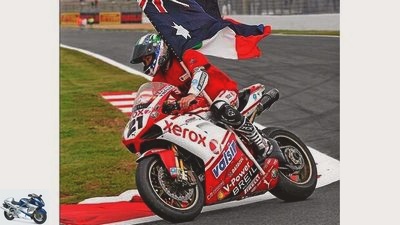 An Australian superhero resigns: In 2008, Troy Bayliss retires as a three-time world champion.

He then drove the first race on his registered Kawasaki ZXR 750. He soon swapped it for a KR 250, because the 250 production class was ideal for beginners at the time. Then Bayliss got himself a ZZR 600. This, he says, is to blame for his wild, physical, but highly entertaining driving style: “That thing was the fattest pig that was ever built. That’s where my style comes from, fighting with the wild boar.”

This was followed by superbike appearances for Kawasaki and Suzuki in the Australian championship. But his unique guest start at the 1997 Phillip Island 250cc GP was Bayliss ?? big breakthrough when he sensationally finished sixth. In the same year he achieved two fifth places as a wildcard rider in the Superbike World Championship. Then he got a superbike deal in the British championship from GSE Ducati. He won the title in 1999 and was world champion two years later. In 2003 Ducati promoted him to MotoGP rider, but although he managed a few podium places, Bayliss was denied a victory, so he went back to the SBK World Championship in 2006. He immediately won the world championship crown there and when MotoGP Ducati rider Sete Gibernau was injured, Ducati called the celebrating Bayliss from the beach straight into the MotoGP box. What followed was a sensation: Troy Bayliss won the last MotoGP race of the 990s era.

Bayliss swears he would never forget the first few years of trying as a racing driver while continuing to work in his normal job. “Kim and I were always at the track, but most of the time the bike wasn’t running at all. We had no idea. I kept lying down with the ZZR because I didn’t know a lot about motorcycles. The fairing kept sanding and I fell over the front wheel. On Monday I went back to work. It was a huge adventure. We still talk a lot about what we’ve been through. People don’t have any ideas about it.” 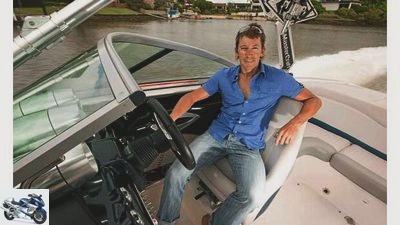 Troy Bayliss with his speed boat in the bay in front of his house. Not bad for a painter.

Like many drivers who did not grow up with racing as a child, Bayliss initially had no goal at all. He just wanted to race. “Most dream of the world championship, want to be like Rossi or Doohan. I didn’t have a plan. But after a year I said to Kim that I could pretty much make a living from it.” Bayliss is proud that he had a normal life before: “I know exactly what reality looks like for most people, what everyday life means. A lot of the guys I’ve met in the business have never had a decent job and therefore have no idea what real life is like.” Another factor that always kept Bayliss down to earth and kept him from becoming a paddock prima donna was his family. The drivers usually wait with the offspring until they stop. There is a fear that children can slow down. Bayliss was married and a father before he started his professional career. “It was definitely good for me”, he tells. “Suddenly living on the other side of the world is a big challenge. But if you can take your wife and children with you, you will have the most important people around you right from the start. Kim will tell you that it wasn’t easy and that I put a lot of pressure on them. But in the end it was worth it.”

Should Bayliss actually return to the Superbike World Championship, he will have two big hurdles ahead of him: He has to win first, but before that he will have to convince his wife well.