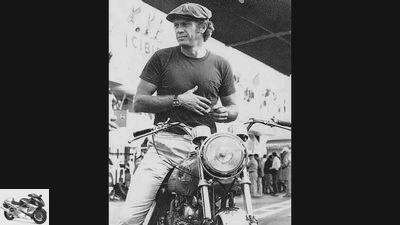 the “King of Cool” has been dead for over 30 years. But its popularity is still growing. One of the reasons for this: Steve McQueen not only played the racing driver, he was actually Mr..

Full throttle through and through. 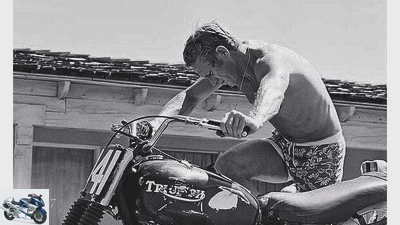 Steve McQueen Edition: “King of Cool” US actor legend Steve McQueen was named in “The Great Escape2 (1963) he jumped over a fence while fleeing with a Triumph Trophy TR6.

“The guy has a million dollar body! And what does he do with it? Risk that others will use it to get around the curve with more traction! ”The incredulous fascination of the speaker in the documentary“ On Any Sunday ”doesn’t sound like an act. “If the movie bosses in Hollywood knew what he was up to on a Sunday afternoon …” The film shows in slow motion how Steve McQueen beats a Husqvarna over the waves of a dusty motocross track, makes considerable jumps and plows through residents. He wears a jet helmet, gloves, leather pants and boots. In 1971, a kidney belt over the long-sleeved T-shirt had to be enough to protect the upper body.

In several of his film roles, which have often become legendary, Steve McQueen embodied exactly what he was in his private life: a full throttle guy (“Broken Chains”, “Bullitt”, “Le Mans …, see p. 105). Someone who knew two possibilities, all or nothing, who had the knife between his teeth on the handlebars (or steering wheel). The following sequence of the US motorcycle sport documentary “On Any Sunday” co-produced by McQueen shows him at the ten-mile cyclo-cross race in Lake Elsinore in California: Together with his friend, the US off-road racing driver Malcolm Smith, McQueen makes his own Machine ready to start by itself. During the race he is rarely in the picture, again it is the speaker who characterizes McQueen:

“In the following race he fell, rolled over and broke his foot. But McQueen got up, drove on and finished eighth despite a broken foot. ”With 1500 starters. All or nothing. Either you bite through or you go under. Terrence Steven McQueen, born in Indianapolis in 1930, learned this lesson early on. His father, a crashed ex-fighter pilot, left the family before Steve learned to walk. As a boy he saw how rough various lovers could be to his mother. As a child, he did not get to know security or even love. The mother drowned her frustration in alcohol and pushed her son off to live with Great-Uncle Claude in Missouri, in the country. When he was twelve she brought him back to live with her second husband in Los Angeles. Again the boy experiences domestic violence and beatings, also and especially on his own body, this time by the stepfather. The teenager is dyslexic and has difficulties, let alone subordinating himself. The crooked path seems to be mapped out to him: at the age of 14 he was caught stealing hubcaps and was taken to a home for boys who were difficult to educate. At 16, McQueen had to stand on his own two feet and found his first real job. He was briefly a seaman on a freighter in the Caribbean. A little later he signed up as a marine soldier and began training as a mechanic. He is also offensive in the army, but the handling of machines learned here will shape his entire later life. After his discharge from the Navy, the young man tries his hand at lumberjack in Canada, works at an oil well in Texas and as a mechanic in a workshop, allegedly in the same workshop where James Dean also has his motorcycles serviced. At 21, he finally moved to New York, where he rented a room without hot water for $ 19 a month. His goal: He would like to complete an apprenticeship as a tiler. But it turns out differently. 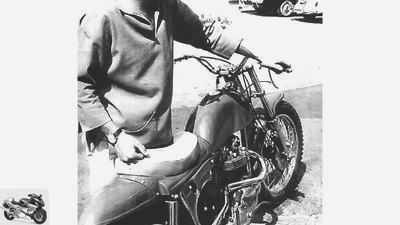 Through a girl, an acting student, Steve McQueen got the idea to try stage appearances and went to the same school. The rest is cinema history: from the Second Avenue theaters to Broadway, from minor television roles, from a leading role in a TV series, roles alongside Frank Sinatra and Paul Newman in the cinema. In 1960 McQueen finally played Yul Brynner almost against the wall in “The Magnificent Seven”.

Neile Adams, McQueen’s future first wife, was also an actress. In the documentary “Irresistibly cool” broadcast by Arte, she remembers how McQueen moved in with her in New York in the mid-1950s: “He only had a suitcase, his motorcycle gear and a large bus stop sign.”

Even while his career is climbing from the very bottom, motorcycles seem to have been more than just a means of transportation for McQueen. Bikes were part of his image early on and were means of escape and valve. Neile Adams: “He looked amazing on the motorcycle, and of course he stood out with his blonde hair.” In interviews, McQueen himself later described how important motorcycling was for him: he can only really switch off and forget the world in the saddle (or on the Steering wheel of a fast car). It was consequent that it was a motorcycle scene that finally catapulted him as an actor into the league of superstars: the legendary jump on a triumph in the prisoner of war drama “Broken Chains” (1963).

McQueen and his wife Neile had meanwhile moved from New York to Los Angeles. There, a few miles north of Hollywood, the brothers Bud and Dave Ekins ran a shop as Triumph dealers. McQueen showed up there in 1961 and wanted an off-road motorcycle. On the same day, he and shopkeeper Bud Ekins set out on a more than extensive test drive on a Triumph Tiger 500 in the direction of the Mojave Desert.

Ekins, like McQueen, born in 1930, was a California desert champion at the time, had competed in international off-road races and started almost every weekend in motocross or desert races in the L.A. hinterland. It must have been the beginning of a wonderful friendship. In 1962 McQueen took Ekins with him to the shooting of “Busted Chains” in Germany in the Allgau (while jumping over the barbed wire, Ekins drove the Triumph TR6 as a stuntman dressed as a Wehrmacht BMW). In 1964 the two started in the US team at the International Six Days in Erfurt, Thuringia. McQueen destroyed his triumph on the third day by falling into a ravine. He himself got away with a few scratches. Ekins broke his leg just hours later. Until then, the US team had been in the lead. McQueen called the Ekins workshop “our shop – our shop”.

1966 – “Cincinnati Kid” has already been published and McQueen receives his first (and only) Oscar nomination for “Gunboat on the Yangtze River” – he describes his favorite motorcycle, the Metisse-Triumph Desert Racer, in an article. He helped set it up in the Ekins brothers’ workshop and calls it “the best-handling bike, I have ever owned”. McQueen also gives tips on how to get a top with the Rickman-Metisse frame, which also serves as an oil tank, a Bonneville engine (only four-stroke engines give McQueen the torque “that I need to get out of trouble”) and “parts from the junkyard” -Motorcycle for little money “- he has not forgotten his origin as a have-nothing.
With increasing Hollywood success, the actor became more and more capricious and unpredictable. Working with him became an abomination for directors. McQueen swallowed all the drugs he could get, and wild affairs began. With Neile Adams he now had a daughter and a son. But the marriage fell apart after he had been violent to his wife several times. Only Bud Ekins and a few others really got close to the increasingly paranoid superstar. But towards his friends he remained the buddy, the boy from the gutter, the guy who gets his bike ready for the race with childlike enthusiasm and dirty fingernails.

In November 1980, Steve McQueen died of cancer. The figure of the masculine hero with the blue eyes, a hard train and an occasional rascal grin lives on to this day. And as a biker icon, McQueen is immortal anyway.