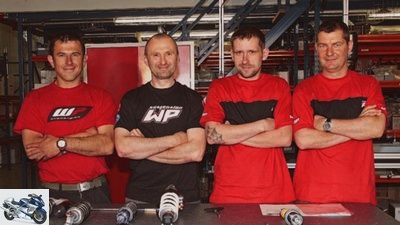 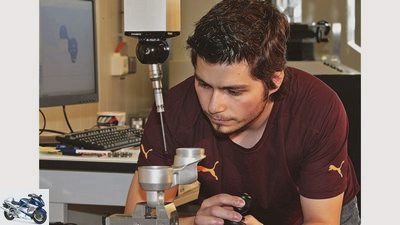 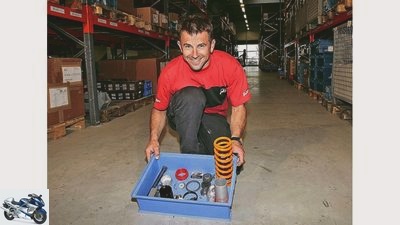 2/14
But now to the development of the spring elements. Step 1: Incoming goods and parts warehouse: Ex-racing mechanic Harald Fuchs (36) amid 10,000 different parts.

The shock absorber of the KTM 250 SX consists of only 120 parts. 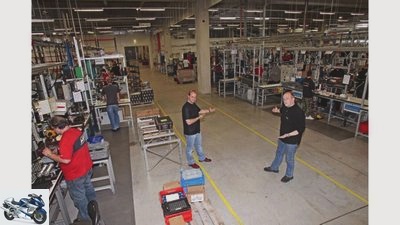 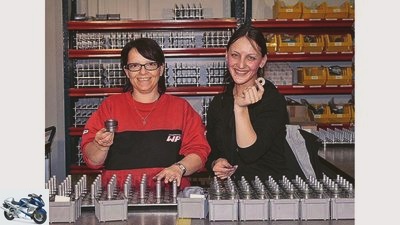 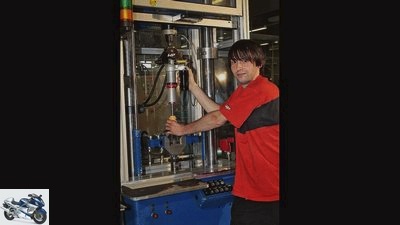 5/14
Step 8: Test bench – Each shock absorber is now put on the test bench for a minute and has to convince Albion Fapi (20) and his computer that it damps well. 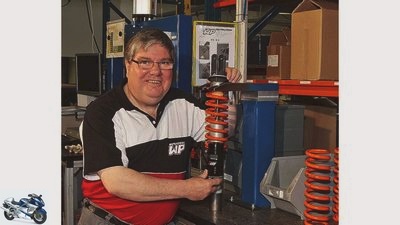 6/14
Step 9: Spring assembly – Ceferino Alonso Vega (56), the only real Spaniard at WP, completes the thing with the suspension spring. He manages 350 pieces per day. 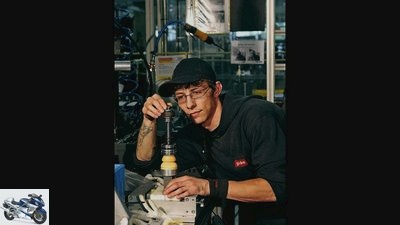 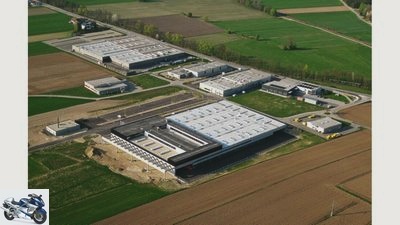 8/14
First of all, the location of the factory premises: Mattighofen is on the top left, the neighboring community of Munderfing is on the bottom right. All together in Upper Austria, which in turn is up in the middle. 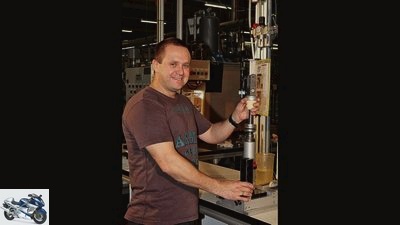 9/14
Step 6: Wedding: At Albert Haidinger (36), the indoor and outdoor works finally come together. He secures the intimate connection permanently with a snap ring. 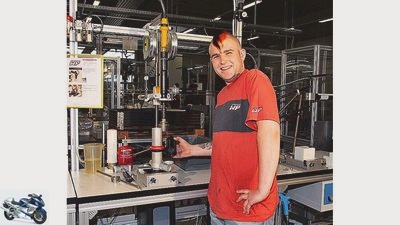 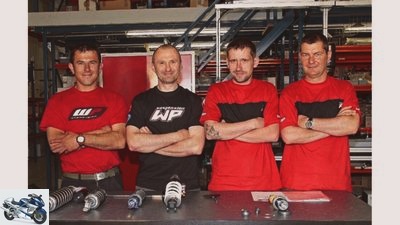 11/14
Four men for special hours: Messrs. Fuchs, Tigla, Zagler and Schweiberer (from left) fulfill special requests in the after-sales. So they gladly followed up the request to have the manufacture of spring elements explained to them. 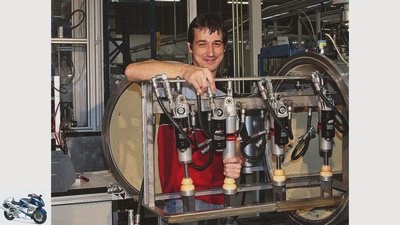 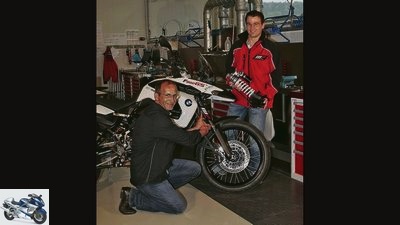 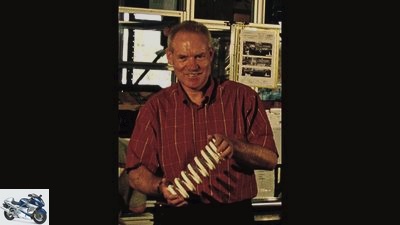 A marketing gimmick. It has to be a shrill marketing gag, because which normal-thinking accessories manufacturer comes up with the crazy idea of ​​choosing the non-color white for a new product that is exposed to permanent dirt attacks? Not a marketing gimmick. There are purely practical constraints that occurred over 30 years ago “White power” to lead. Dutch motocross rider Wim Peters had a serious crash in a race in 1975 and was injured for over a year. The mechanical engineer uses the compulsory break to improve the suspension elements of his Crosser.

He succeeds so well that other racing drivers also want the parts that were originally intended only for their own use. For Wim Peters, his hobby turned into a profession, and at the end of 1977 he founded his own company. He initially has the springs coated in a company that otherwise makes hospital beds – the only color available is therefore white. This color becomes a trademark.

WP no longer stands for the initials of the company founder, but for “White power”. Countless sporting successes make the brand, along with Ohlins, the epitome of the finest chassis components. Over 200 world championship titles are won with WP parts, among others by Toni Mang, Valentino Rossi and Michael Schumacher. In the 1980s increases WP from a manufacturer of aftermarket parts to an original equipment manufacturer (OEM, Original Equipment Manufacturer) and primarily supplies KTM, later also BMW. In 1983 White Power is the first manufacturer to mass-produce an upside-down fork.

In the English-speaking world, the brand name leads “White power” but again and again to nasty mix-ups; then “White power” is also a term often used by American racists. So 1991 becomes out “White power” officially the company “WP suspension”, but at least in German-speaking countries “White power” – albeit unofficial – still the name for excellent spring elements. 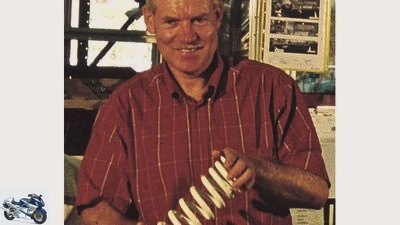 Wim Peters: Founded the company in 1977 and let white work.

From 1997 KTM gradually took over the Dutch company, Wim Peters initially remained with the company as managing director and until his departure in 2004 as a consultant. Since 2008 WP Suspension has been a 100 percent subsidiary of the Austrian Cross Motorsport Systems AG, a holding company that also includes KTM. In the same year, the first WP forks are manufactured at the KTM headquarters in Mattighofen, Upper Austria, and the rest of the production moves to Austria at the beginning of 2009 – the closer proximity to the most important customers (KTM and BMW) is one of the main reasons.

The off-road sports department and parts of the research and development department will remain in Malden (in the west of the Netherlands, south of Nijmegen). The brand new WP Suspension factory is now just under four kilometers south-east of Mattighofen, on the outskirts of the 2700-inhabitant community of Munderfing. Around 120 people are employed here, 80 of them in production. Parts for original equipment (OEM) and retrofitting (aftermarket) are produced on two floors and a good 12,000 square meters. The OEM parts are forged parts, while CNC milled parts are used for the aftermarket. The OEM business accounts for around 90 percent of the units, the retrofit spring elements, of which there are around 500 different models, are distributed among the remaining ten percent. The effort that WP puts into supplying aftermarket customers is much higher. In addition to the series production that takes place in production lines, there is a separate area (“Post-sale”), in which four employees take care of special requests completely independently, with their own parts warehouse and entirely by hand. It then takes a maximum of 14 days (in 80 percent of all cases) from the order to delivery of such a custom-made product.

Some of the WP employees come from Germany. For example, six of the eight designers. One of them is Georg Kotzinger (31), who drives the Sixdays in his free time or likes to win a 24-hour enduro. His Austrian colleague Harald Fuchs (36) from the aftersales did some work as a racing mechanic for KR Racing in the motorcycle world championship before his special stage time. WP Suspension operations manager Winfried Kerschhaggl (47) was most recently head of KTM motorsport. And so it goes on cheerfully, the WP workforce is heavily contaminated with motorcycles.

And that is reflected in constant new developments. For example in the EDS II electronic retrofit chassis, which gives BMW boxers unimagined chassis qualities for 1499 euros. Or in a retrofit fork for the BMW F 800 GS, which is currently about to go into series production and which will be an alternative to the standard Marzocchi part, which cannot be changed in the setting, from 2011 for just under 2000 euros. There is still plenty of room for expansion around the new plant, KTM and BMW are doing good business, and German workers are likely to become cheaper and cheaper. Rosy (white?) Times for WP Suspension!