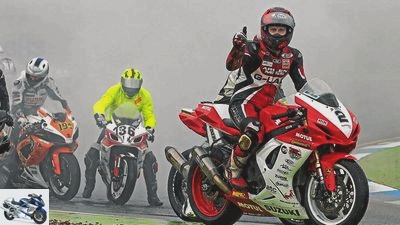 Once a professional in the IDM, then in the Big Brother container and finally disappeared completely, Marco Eismann felt like racing again. PS put him in the Cup on the Suzuki GSX-R 750 – an experiment.

The life of a professional racing driver can be a dream. When the bike works, the team is right and the rider delivers the results. Marco Eismann experienced that when he started in the IDM Superbike. But this life can also turn into a nightmare until it hurts so deeply that no motorcycle in the world is more enjoyable. The blond from the Stuttgart area also had to find out.

After that, he did not sit on a racing motorcycle for six years. “The IDM was a dream that was over sooner in my early twenties than I thought it would be,” says the now 29-year-old in the Hockenheim paddock. He has just done his very first laps in the saddle of a super sports car in qualifying of the GSX-R 750 Cups. The Suzuki Brand Cup is part of the supporting program at the IDM season finale and thus offers the perfect test arrangement for the PS experiment with “Eisi” – returning after six years of absolute abstinence. “After two corners I had that great feeling again and this irrepressible joy of sitting on a racing motorcycle,” he beamed. Already in his second lap in the first qualifying he set a good time and after two more laps he moved up to sixth place in the high-class top ten with 1.37.5 minutes, in which the top ten are still fighting for the championship title.

The old racer ambition awakens immediately and Eismann admits that he knows this feeling from before. His fun with the experiment and the relaxed “take a look” gives way to the will to find a few more seconds in the second qualifying. But the shot backfires. Instead of a better time, Eismann steps on the spot and slips to starting position twelve – the boys in the Cup are no nose pickers and are fully in the juice after a long season. Nobody is given anything – especially no ex-IDM driver.

At the end of 2008 no team wanted him anymore

“As before,” Marco waves afterwards in the pits. “I was sure that I could drive faster, but I put a lot of pressure on myself and was completely tense.”

Like back then, in 2008. Eisi drove on an MV Agusta F4 alongside ex-Supersport world champion Jorg Teuchert in the Superbike IDM . During the pre-season tests, the mood slowly turned and Eismann felt neglected by the team. The atmosphere and the pressure affected the sensitive fellow so much that he was soon psychologically on the ground. “If you drive well, you are the greatest. If that doesn’t work, you’ll be an idiot straight away – that’s how it works in the sport, which is always about a lot of money, “summarizes the Swabian, who only started seriously with motorcycles at the age of 16 and then quickly took part in the ADAC Junior Cup demonstrated his talent.

At the end of 2008 no team wanted him anymore, and the IDM couldn’t be done without sponsorship money. Eismann gratefully accepted an offer to move into the container for the TV show “Big Brother” in the hope that, with a little TV glamor behind him, he might be able to ride motorcycle races again. The calculation did not work out, the career of the professional racing driver Eismann came to an abrupt end at the age of 23.

In the Gixxer Cup, nobody is given anything for free

Race day in the cup. Marco looks nervous. He doesn’t want to embarrass himself in the field of Cuppies, “but real pressure to have to get a good result so that you can buy your rolls tomorrow is something else,” says Eismann, happy to be there again, to race air sniff. “Once you’ve soaked in that, this hustle and bustle in the paddock, the conversations between the racing drivers, then it doesn’t let go. “

And it’s ice weather, because it rains before the start, then the track partially dries off. Eismann makes a great start, overtakes diligently on the first lap and is right in fourth place. “I saw the red rag again and even wanted to win,” he shakes his head later in the box. In the middle of the race, on the GSX-R with start number two, he has third-placed Kjel Karthin, the later Cup champion, right in front of him. After the IDM connection to the Mercedes grandstand, Eismann wants to attack, at the latest when turning to the right to the Motodrom, it should be. But suddenly the rear wheel smears away. When it builds up grip again, Eisi heaves it out of the saddle. The following handstand turns into a courageous rescue attempt, and the comeback pilot hits the tank with the crown jewels.

Without air, but with pain, Marco can only roll and finally breaks off the race completely. After the initial disappointment and anger about the dangerous situation, he can soon laugh again. “Nobody is mad, that’s racing just for fun. I didn’t want to break anything or injure myself, ”he sums up the first lap. His speed was very good up to that point, until he was eliminated he drove the fastest lap in the field and Marco was able to show that you can’t simply forget a certain basic speed. There is also always a second chance here, later in race two.

There is still a lot of ambition in him

This time it’s pouring right. Again he lives up to his earlier reputation as a good starter. But in the GSX-R 750 Cup, the fight is tough. If you want a top ranking, you have to counter it accordingly.

Eisi moves up from twelve to fifth and has to extend his elbows more than once. But even contact with the opponents does not frighten him, so much ambition is still in him. In contrast to an IDM driver under Duck, however, he remains cool and knows how to assess the situation. When it starts to rain worse and worse, Eisi backs away. The used rain tires no longer manage to push the water away in such a way that you can counter it without risk. The hot spurs pass by, the ex-professional switches to enjoyment and is amazed at the fighting spirit and the willingness of the cuppies to risk a lot for a good season result.

When the number two lines up after the checkered flag in the Sachskurve with the competitors for collective burnout, you can feel that Eisi doesn’t care about eleventh place. Instead, you see a guy who once meant everything to ride a motorcycle, but then made him downright sick. Now he is standing down there in the midst of the Suzuki GSX-R Cup warriors and is smiling all over his face: “It was so much fun. Great guys here, a great racing bike – I would do it again anytime. ”Let’s see Eisi, you can have fun again in the 2015 season. 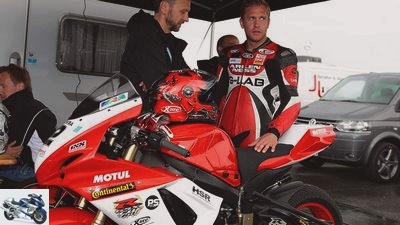 … after all, the weather is not ideal: it rains before the start.

Marco Eismann was born in Stuttgart in 1985. At the age of six he discovered his love for motorcycles from a classmate who owned a Suzuki DS 80 crosser. After many attempts at persuasion, little Eisi was allowed to drive with us. After that he really wanted to become a professional racing driver. But when Eismann’s parents moved, the dream was quickly over – for the time being.

By the age of eleven, Marco had saved enough to buy a DS 80 himself, which he used to scour the stubble fields around his home town. When he was 16, he got the 125 driver’s license and an RS 125 from Aprilia. To get it right, Eismann simply called ADAC and asked how he got on a racetrack. This was followed by the invitation to view the ADAC Junior Cup in 2001, and Eisi came second. Then he took part in the qualification at the forerunner of today’s MotoGP Rookies Cup, and got one of the 25 places out of 540 applicants. At the end of the season he was eleventh and was promoted to the 125cc IDM. Things didn’t go so well there, Eisi didn’t have the money for the right equipment. In 2005 he switched to the Suzuki GSX-R 1000 Cup and came third overall. The Superbike IDM debut the following year on Suzuki did not go so smoothly, but the Inghart team brought Eismann to the MV Agusta. After two years the dream was over: end of career at 23.