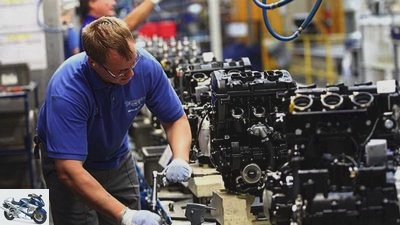 Report: This is how Triumph produces motorcycles

Report: This is how Triumph produces motorcycles
Where and how are the two and three cylinders made?

Two- and three-cylinder – nothing else comes into the frame with Triumph. Well, you know that. But how do they get into the frame? And where? Triumph produces in both England and Thailand. Thanks to sophisticated logistics, (almost) everything is everywhere.

Guy Campton remembers the devastating fire as if it were yesterday. “I just had a day off when it happened,” says the man with employee number 16. Campton is something of a man from the very beginning among the approximately 900 employees in Hinckley today. He has witnessed the rebirth of Triumph and has been there since the first small team of secretly rented office space moved to the new company building on the green meadow on the outskirts of Hinckley. That was over 20 years ago. And soon exactly ten years of the fire. The fire broke out on the evening of March 15, 2002 on the factory premises and destroyed Factory One. The first Triumph production facility of the Hinckley era was almost completely reduced to rubble overnight. Only the paint shop, which is still there today, survived the disaster largely unscathed.

The following months were among the most exciting and stressful in Guy Campton’s working life: within a very short time, the production engineer had to build a new production line in Factory Two, which had opened three years earlier on the same company site. It was vital for the brand that things continued as quickly as possible. After all, after the bankruptcy in Meriden in 1983, Triumph only celebrated its comeback in Hinckley in 1991. And for the British, who had to establish themselves against the Japanese overwhelming power, black numbers had only just moved into the realm of possibility after around ten years. After all: Factory Two, which until then only housed the administration and warehouse, was ready, and around six months after the night of the fire, the first Daytonas, Speed ​​Triples and Bonnevilles rolled off the new line there.

Today Factory One is back in operation, but Factory Two (alongside Factory Four, which opened in Thailand in 2006) remains at the heart of Triumph. Behind its gray-white industrial facade, the most important engine inners are built, most of the engines and then also the complete motorcycles are assembled. “Each new model is built in Hinckley for at least one to two years, until any problems that may arise within the production process have been resolved,” explains Uli Bonsels, press spokesman for Triumph Germany. Production can then be relocated to Thailand. Basically, all models and engines are manufactured in Thailand as well as in Hinckley – except for the classic series with the two-cylinder engines, whose models and engines are now exclusively made in Thailand.

If you want to know where a Triumph comes from, all you have to do is look at the nameplate. An F2 below the vehicle identification number stands for Factory Two, England; F4 is called Factory Four, Thailand. The two factories look similar on the outside and are identical in terms of floor plan and interior down to the details. “It was deliberately designed to ensure that production processes were as identical as possible,” explains press spokesman Bonsels. 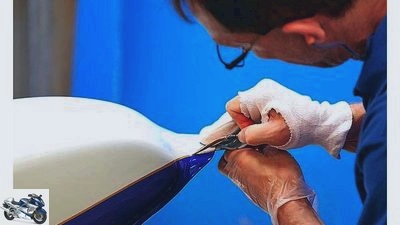 The pinstriper (decorative line painter) works with a “tug” made of squirrel hair.

A heavy odor mix of untreated metal, bearing grease, new plastic and spent welding electrodes hangs under the six meter high hall roof of Factory Two. The buzzing and roaring of welding robots mixes with the staccato of dozens of impact wrenches to form an industrial pulp of sound that forces each of the 150 or so Triumph workers to wear earplugs. Soon after the start of the shift at seven o’clock, an irregular, regular overtone is mixed in. The function of the horn is also checked on the Rolling Road, which each of the 200 or so motorcycles produced every day has to cross. But the way from materials management, also in Factory Two, which also looks after incoming goods in two shifts, to a finished motorcycle built in one shift is a long one. Engineers like Guy Campton have defined it down to the last detail. Briefly summarized in the Send-mit-der-Maus style, this path goes something like this: In the 36,000 square meter halls of Factory Two, crankcases, cylinder heads and camshafts are produced on two processing lines using CNC milling machines. The crankshafts have their own production line. They are delivered as forged blanks and then go through a six-hour machining process. Once all the oil holes have been drilled and the gears have been milled, a 28-hour plasma nitriding process begins to harden the shafts. After the gears have been pressed on, quality assurance is carried out on a random basis by the measuring computer, which measures deviations from the target dimensions at critical points on the engine innards and allows a maximum tolerance of twelve micrometers. The parts are then delivered to the two engine assembly lines: Around 80 employees work on Engine Line One (1050 three-cylinder) and Engine Line Two (Thunderbird two-cylinder, 675, 800 and Rocket III three-cylinder). They have almost 90 seconds per motor on the continuously running belt to carry out their respective work steps. This corresponds to the cycle in which the finished engines should run from the engine lines to the main production line, the final assembly.

But first it’s Matt Woolridge’s turn. Together with colleagues, the 26-year-old connects each of the still dry two- and three-cylinder cylinders to an electric motor, which drives the moving parts in a kind of cold test at low revs for the first time. Then each motor housing is checked for leaks by means of a compressed air test. If everything is okay, the injection, wiring harness and spark plugs are fitted and the engine is given the first lubrication. Around a third of the engines, namely those that are delivered to the Factory Four in Thailand for assembly, and a random selection of further twins and triples are now sent directly to one of the four test stands for an initial hot test, where they are started and processed precisely defined performance and exhaust gas measurement program.

Finally, on the final assembly line, 75 Triumph workers assemble the frames and chassis parts delivered from the F3 component plant in Thailand with the engines to create finished machines. The logistics of how, where and when which part for which model is delivered to the line comes from production engineer Guy Campton and his colleagues, who have developed exactly the same procedure for production in Thailand, so that the same as possible in both production sites on different continents Processes prevail. 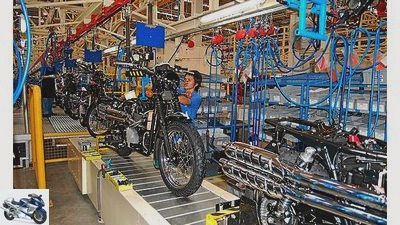 The final assembly in Thailand.

From the slowly but continuously moving belt, the half-finished motorcycle is lifted into the air by an industrial lift for suspension assembly so that the fork and the wheels, which are completely pre-assembled with tires and brake discs, can be screwed from below. At the same time, the brakes are mechanically filled with brake fluid under vacuum. The last step is to assemble the tank and the plastic parts of the cladding.

Every two minutes and 25 seconds, a Triumph employee pushes a finished motorcycle off the assembly line. As if for a baptism, there is the first sip of fuel on the way to Rolling Road. This is the final test station, where all functions such as lights, electrics and brakes are checked and the motors are warmed up until the fan starts. Finally, on a roller dynamometer, a computer picks up the performance of the two and three cylinders and compares it with the target values. If there is enough pressure on the roller, it goes to packaging and finally (within Europe) by truck to the dealer. But Guy Campton really has nothing to do with that anymore.

20 years of triumph in Hinckley / England