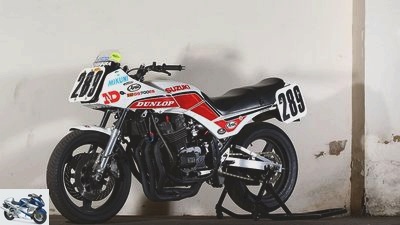 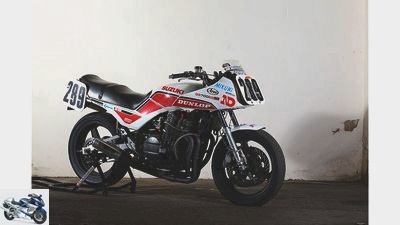 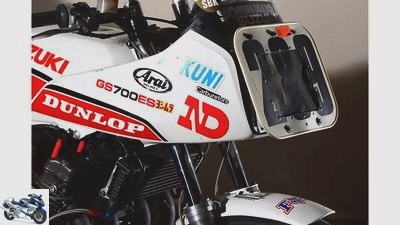 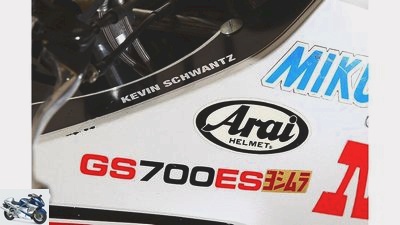 3/12
The competition couldn’t believe it in 1984 when Schwantz signed the contract with Yoshimura. 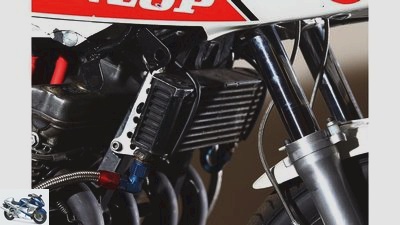 4/12
With the introduction of the new GSX-R came the uncertainty. Schwantz had to get used to the new bike. 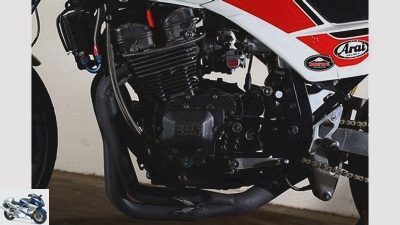 5/12
The engine of the Yoshimura-Suzuki GS 700 ES was a weak point. It had no water cooling, which led to permanent heat problems. 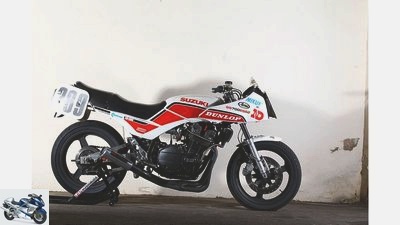 6/12
The mechanics had some geometry problems – the bike was wobbly at the beginning. 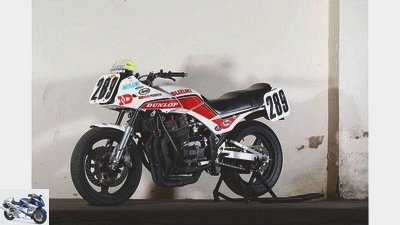 7/12
The Yoshimura mechanics tried to turn a non-sports motorcycle into a competitive racer. 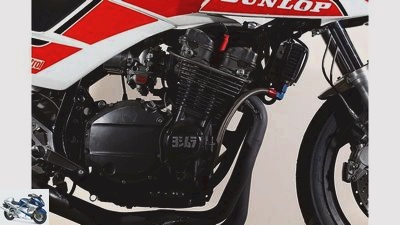 8/12
Schwartz himself claims that the GS was one of the best motorcycles of his career in terms of handling. 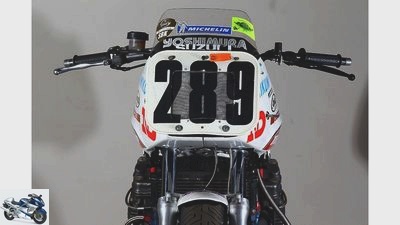 9/12
In and of itself little real racing material, lots of craft solutions, but a winning bike with Schwantz. 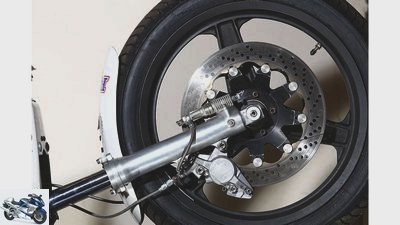 10/12
Everything looks pretty spartan on the Yoshimura-Suzuki GS 700 ES. 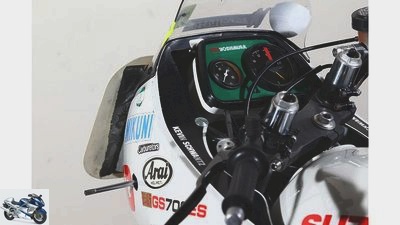 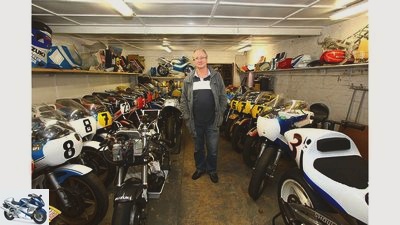 Almost 30 years after Kevin Schwantz ?? Breakthrough as a racing warhorse, PS meets that ominous Yoshimura Suzuki superbike that transformed the Texan amateur into a Grand Prix superstar within hours.

It looks completely unspectacular. At least not like a factory machine that would be able to get a future world champion off the ground. In fact, this Yoshimura-Suzuki GS 700 looks more like one of those bizarre, antiquated and souped-up street ships that patiently wait for their driver behind advertising pillars in neglected alleys to finally be allowed to roll a few meters again. But it was precisely this motorcycle that once fired Kevin Schwantz into the spotlight and paved the way for him to become world champions in the premier class of motorcycle racing.

Driver and machine first met in 1984 on the California race track in Willow Springs. Back then, the Texan was nothing more than one of those aspiring young racers who fearlessly pounded around on his Yamaha FJ 600, an RZ 350 and a completely strange XV 1000 superbike. He didn’t care about the bike itself, the main thing was Yamaha, because Kevin’s parents had a Yamaha shop. His talent was first noticed in endurance races, in which he knocked down the FJ 600 or fired into the area. “There was this guy who totally ran his FJ over,” remembers ex-racer John Ulrich, who at the time drove a Moriwaki 1150 Suzuki GS in endurance races. “I followed him through the carousel in Nelson Ledges, a long right with a nasty hook at the end. Through the whole bend, the guy had the handlebars flapping like crazy, but he didn’t even think about turning the gas off. He just drove incredibly radically, and he did that everywhere he went. “ 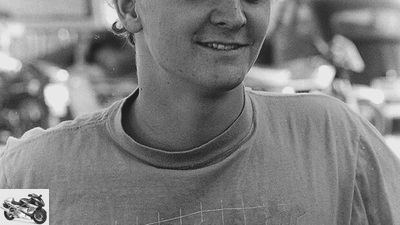 Schwantz’s breakthrough was now 30 years ago.

Ulrich knew the development people from Yoshimura America working on a Suzuki AMA superbike. He suggested they let this 20-year-old snot drive this GS 700 times. Anyway, they were looking for a replacement for Wes Cooley, who had won two Superbike titles with a GS 1000 and wanted to switch when the class was limited to 750 cc. “John called me and said he could get me a test with a Suzuki,” recalls Schwantz, who had only been racing for a year at the time. “I thought: Wow, this is one of maybe two factory racers in the USA. I’ll do that and if I don’t do anything else than drive out and throw that thing away on the first lap – at least I’ve been on a factory racer once. That was my thought. I could have done it differently: Damn it, this is your chance, don’t screw it up. But I didn’t want to put the pressure on myself. I didn’t know anyone who had ever ridden a Yoshimura superbike, so I was just thievingly happy. “

The test was scheduled for December 4th at Hobby Races in Willow Springs. A few days earlier, Ulrich Schwantz had his 1150s driven and explained the route for a large motorcycle on slicks to him. Schwantz only knew the track with the FJ on road tires. The young Texan wasn’t the only driver Suzuki had in mind for the 1985 season. And some of them were there too. “Guys like Scott Gray and Todd Brubaker, real professionals, drove around there on their private motorcycles to get even better,” Schwantz remembers the day. “They all knew about the Yoshimura chance and said to each other we were going to spank this Texas kid’s ass and grab our place. But they didn’t know about my 24-hour race with the FJ shortly before that in Willows – I knew the track like the back of my hand. “ 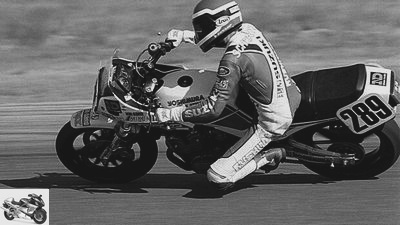 Not yet with the legendary number 34, but already on the road with the wild rodeo style: Schwantz on the Yoshimura-GS in Willow Springs.

The day of testing didn’t start out encouragingly. “In the morning I stood on the track with my station wagon and waited for the truck. They came, unloaded and I had three laps to break in on a bike that I had never seen before. ”Then there were two races in which Schwantz was supposed to show what he could do. Then everything went wrong in the Formula One race. “I stalled the box at the start. Then I pushed, but couldn’t get the big bucket. Suddenly someone called out to me to stay seated. It was Doug Toland who won the 1993 World Endurance Championship. He pushed me. I turned into the first corner of an eight-lap sprint race while the first were in Turn 3. I just thought, F ** k, now you have to hurry up. In the end I overtook everyone and broke the superbike lap record. “

“At the Superbike race I already knew how things were going, got off to a good start and then slowly drove away from the other. I was even faster than in the first run, ”says Schwantz with a grin. “When I got off the motorcycle, Suehiro Watanabe, Yoshimura’s race director, was standing there, holding a piece of paper under my nose and constantly saying: sign, please sign, write here. But I wanted to have lunch first. In the evening I signed up to drive for them in Daytona and the West Coast AMA races in 1985 – for expenses and prize money. “

The fellow competitors were speechless that this young stranger had screwed up the tour for them. “Some were completely beside themselves,” Ulrich looks back. “You said Schwantz was just crazy and didn’t have what it takes for the AMA. But it was just sensational – that’s the way it was. “ 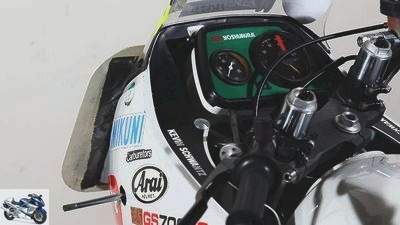 If that Suzuki debut was like a fairy tale – from amateur stock athlete to factory superbike in a few hours – what followed would have been a horror trip for any less talented rider. In 1985 Schwantz had to deal with the factory VF 750 Hondas with HRC kits that were years ahead of the GS. The VF were mean things: water-cooled 16-valve V4 engine with racing frame and 16-inch wheels. In addition, the bikes were full of HRC candy and borrowed parts from the NS 500 GP machine. The Suzuki was also a 16-valve, but otherwise an air-cooled street mill.

“We were a few steps behind,” says Yoshimura mechanic Don Sakukura with a slight understatement. “I wouldn’t even call the GS a sports bike. And so we tried to turn a non-sports motorcycle into a competitive racer. The engine was a weak point. It had no water cooling, which is why we had constant heat problems, which affected the durability. In addition, this GS fell exactly in the gap between the GS 1000 and the first GSX-R 750. There was almost no support from Japan because Suzuki was developing the GSX-R at full speed. We took a couple of GS 1000 parts, but actually built the 700s from scratch and were pretty much at a disadvantage. “

The team’s racing material was for sale everywhere: forged pistons and titanium shafts from Yoshimura and a stronger 12-plate clutch from a 79 eight-valve GS 750. The team worked hard on two cylinder head designs: one with straight ports for Daytona and one with curved ones for the rest. But before that they had to bore the engine up to 750 cc, because the GS was offered in the US as a 700 because the US government had increased the import tariffs on bikes with 750 cc and more to protect Harley-Davidson from competition from the Far East. This reamed 750 made at best 118 hp at 11,500 rpm, almost ten hp less than the Honda VF. 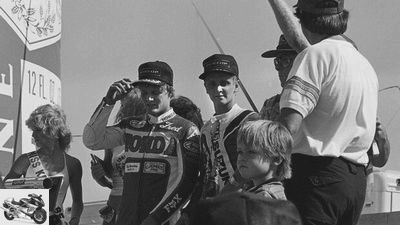 Kevin Schwantz’s career took off from the test drive.

Poor performance wasn’t the only problem. “Handling the 16-inch front wheel was a huge challenge,” recalls Sakukura, who was there when they took 18-inch wheels and lengthened the wheel rim by a full six centimeters. “We had geometry problems. I don’t want to say the bike was unstable, but it wobbled a lot. ”The Yoshimura GS chassis was no less made of off-the-shelf stuff: rear dampers, triple clamps and steering dampers. Plus a few special goodies like the aluminum swingarm, a couple of triple clamps from a factory RG 500 and fork and brakes from the Production RG.

Maybe the GS really wasn’t that nervous in the end, but Schwantz always made them look like that. Nobody had seen this driving style before: Almost a crash in every corner and still got stuck every time. In April 1985 he won his first AMA Superbike race in Willow and beat reigning champion Fred Merkel on the factory Honda. Ulrich will never forget how Schwantz squeezed that Honda-crushing number out of the Suzuki: “He came down the hill from Turn 4 and, I swear to God, the only thing that kept him on the bike was his right hand – still full on the gas. Nobody will ever forget how Kevin won the race, how he dealt with the defeated Suzuki, threw it sideways into the curve, pulled the throttle full, the rear wheel came around, the suspension at the stop, the rear wheel spinning, like it lifted him out of his seat, his feet well over the notches, but his hand on the throttle was at full speed – so he flew around the course. “

Despite all the drama, Schwantz loved his GS: “I still claim that it was one of the best bikes I’ve ever ridden in terms of handling. I had these tall handlebars so they could be brought down just fine. You could do anything with her and it was always good. ”His driving style came from motocross. “In 1983 I had an AMA Junior Motocross license, but I had to work in our shop and I wasn’t able to train four to five hours, five days a week. That’s why I switched to street racing. My motocross past is certainly the reason for my upright sitting style and how deep I pushed the bike. When I look at pictures of Suzuka (when Schwantz won his first GP in 1988 – the editor), it looks like the handlebars are about to dig into the ground. I couldn’t hang myself off the motorcycle like that. “

Of course, there was more to Schwantz’s skills than spectacle and kamikaze maneuvers. “During the test in December 1984, Kevin came up with a whole encyclopedia for every corner on the course,” says Ulrich with a smile. “It had an incredible number of landmarks and filleted every single curve, which was still very unusual back then.”

Schwantz wasn’t just quick at the exit of a corner. “We noticed straight away how hard he braked and how fast he drove into the curve. He kept that up to the GP, ”says Sakukura. “We had never seen that before.”

“When the GSX-R came out, it felt more like a racing bike and had great handling. But I was unsure. I missed the tall handlebars. I asked the guys to make the stubs higher because I felt like I had better control of the bike. We had problems with the engine and in the end it was barely faster than my old GS, ”says Schwantz, summing up the model change. No matter, because less than 18 months after his GS debut in Willow, he was suddenly in Europe and drove his first Grand Prix in Assen.