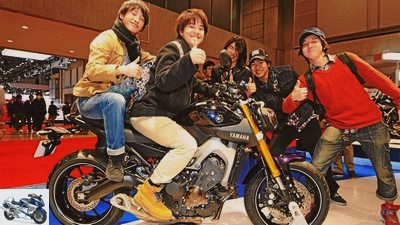 Do you love trade fairs? For lovers of colorful motorcycle shows, 2013 was a bit poor. No Intermot in Cologne, the Eicma in far away Milan, the “motorcycles” in Dortmund too long ago and the upcoming event still too far away. The opportunity suddenly jumps out of the box like Kai. A tire presentation in Japan at the exact time of the Tokyo Motor Show. Madness, if something smells like the big wide world, then that’s exactly what it is.

It is the last Thursday in November and the fair is supposed to end on the weekend. An ideal day, in the opinion of Japanese friends, to go on the prowl: “Well attended, but not too crowded – just right!” Half an hour before the admission, I am on a pilgrimage in the midst of a crowd in the direction of “Tokyo Big Sight”. From a distance, the main entrance to the exhibition grounds looks like an upside-down pyramid. And the distant view remains somewhat. The crowd stops, a sea of ​​people in front of me. The end of the line. Not to buy an admission ticket. All of them are already in good hands. Nevertheless, according to European estimates, you don’t think you’re in the hall for an hour at the earliest. Not so in Japan. Exactly at ten o’clock the line starts moving. Without shoving and jostling, flanked by stewards armed with megaphones, who thank you for your visit and warn you to be careful. So that you don’t step on your feet. A warning that is superfluous in Japan, but it is better to apologize in advance to be on the safe side. 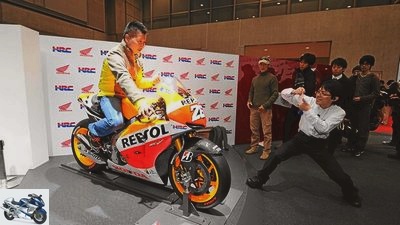 And you’re in the middle of the hustle and bustle. Within minutes, the swarm of people spread across the spacious area. the
A look at the clock reveals: the whole thing took less than ten minutes. What should I watch first? Motorcycles? Oh what, let yourself drift. The Tokyo Motor Show is a feast for the eyes for vehicle lovers of all stripes. Especially since the fair can also attract all sorts of bizarre companions when it comes to cars: weird microvans, futuristic concept studies, shrill racing cars. But almost all of this from a Japanese source. In comparison, the exhibits of the well-known European brands look pretty old-fashioned and conservative.

The BMW logo catches my eye between Halls 2 and 3. The stand is packed, but most of them are interested in the new four-man convertible and the Mini. In the middle of the turmoil, the motorcycle business is relatively unspectacular
with R nineT, HP4 and K 1600 GTL. The Japanese are still enthusiastic, sit in a tour rehearsal, play with buttons and switches. The boys prefer to ride the superbike, the elderly and a surprising number of women ride the retro boxer. The mighty six-cylinder is also frequented, but for many the Trumm seems too powerful to use it in the lively traffic of large Japanese cities. Even Yuji Eri, who owns a Harley Road King, would put the six-pack (“because of this ingenious engine”) in front of the door as a second vehicle for trips to the Japanese Alps: “But that would be a damn expensive place!”

At Suzuki and Honda, too, the motorcycles have to share the stand with cars from the same company. Whereby Honda has given the two-wheelers significantly more space and has made almost the entire product range including the MotoGP racer by Dani Pedrosa available for testing. Just around the corner stands at Yamaha the “99” from Vice World Champion Jorge Lorenzo. The YPJ-01, a top-class Yamaha racing bike with an electric motor, is attracting almost more attention. It gets really visionary at the Kawasaki stand, where the J3 study with electric drive opens an exciting discussion about the future of the motorcycle. I love trade fairs … 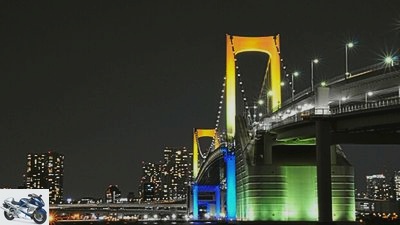 Admittedly, the twelve-hour flight to Tokyo is exhausting. The nine million metropolis offers a great mix of exotic culture and imposing architecture.
Who hasn’t raved about the New York skyline? In addition, where this can be reached quickly within six hours compared to Tokyo. But the skyscrapers that border Tokyo Bay in the north have their special charm. Which is mainly due to the fact that they are built on rather shaky ground in this earthquake-rich region. Buildings like the Tokyo Skytree, a 634 meter high television tower, which, like many other buildings, is provided with a sophisticated construction to protect against earthquakes, are all the more impressive. The next Tokyo Motor Show will take place in 2015. The ideal solution is to search for a location in the vicinity of the Tokyo Big Sight exhibition center in the “Waterfront City” in the Ariake district (Koto district). A still young district in the port area of ​​Tokyo with many shopping malls, museums, parks and, especially at night, a great view of the city. With the metro, Tokyo can be explored perfectly (and thanks to the numbering of the stations very easily).