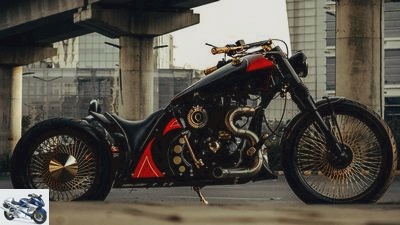 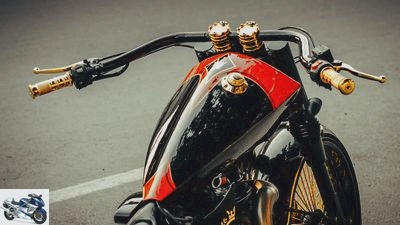 2/6
The new tank in the shape of a coffin with the mighty handlebars. 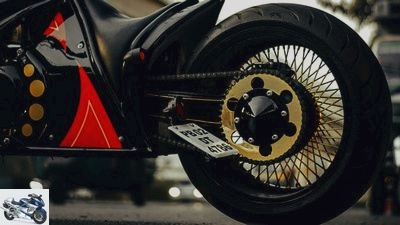 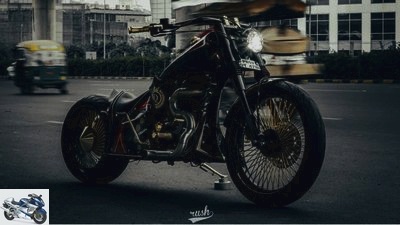 4/6
A 23-inch wheel is used in the front that raises the steering head significantly. 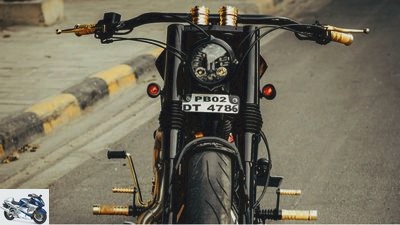 5/6
The fork has been heavily disguised and provided with an LED cornering light headlight. 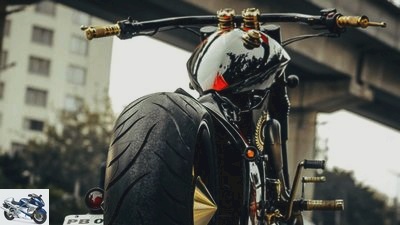 6/6
The rear 240 rolls freely and without any significant cover.

Yesterday in the editorial conference: “Kratschmar, there are abysses opening up for you.” To clarify: That’s when the boss spoke and whenever he asked me “Krachmar” calls, I have either made an absurd proposal for a topic or defended another no less confused one. In this case I stand behind the Queen Bullet from Neev Motorcycles with the words: “A single-sided swing arm and big spoke rims are nice.”

Whoever is the series bullet of Royal Enfield shows that the madness that lies behind the Queen of Neev is only really becoming clear to him. The Indian customizer installed a single-sided swing arm at the rear, combined it with an 18-inch big-spoke rim and a – sit down – 240 tire from Avon. At the front it goes crazy: A 23-inch rim rotates in the heavily clad fork, also built with thick spokes. The well-known and proven Enfield stew with 499 cubic meters and around 27 hp leave Neev untouched. On the exhaust side there is only an arm-thick elbow. Whether something is dampening is questionable.

On the mighty fork covers, Neev installed a butted, strongly curved handlebar on golden risers, which are very reminiscent of steam punk. A style and subculture that is strongly oriented towards the Victorian era and highly stylized steam and gear technology: The design and details of Neev point in this direction, which is underlined by a Queen named Royal Enfield. This style is taken up by the newly designed tank in the shape of a coffin with the raised tank lid, also gold-colored. Elements that appear again and again on the large sheet metal surfaces on the motorcycle and the knight’s shield on the injection. 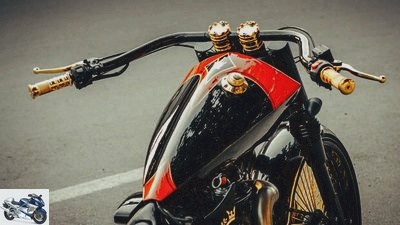 The new tank in the shape of a coffin, with the mighty handlebars.

Also taken from the Victorian era and the dungeons of that time, the saddle and stern seem to be the Queen: The word torture chair comes to mind. On the heavily modified rear frame, a new V-shape made of tubular steel supports the minimalist mudguard and the saddle that slopes sharply to the sides. The ergonomic crown is placed on the footrests, which are mounted far in front and just as high up.

In any case, you shouldn’t talk about the sense and nonsense of 99.96 percent of all custom bikes. The Queen from Neev Motorcycles is by no means one of the remaining 0.04 percent: The conversion is just as crazy as it is fascinating.