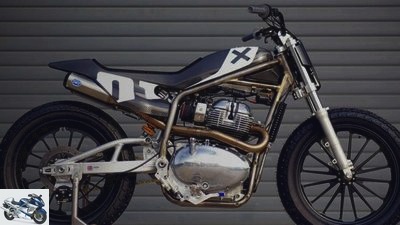 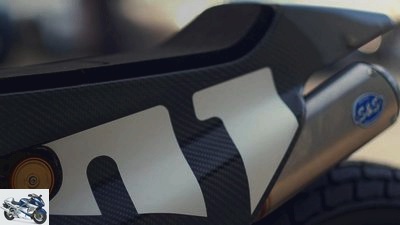 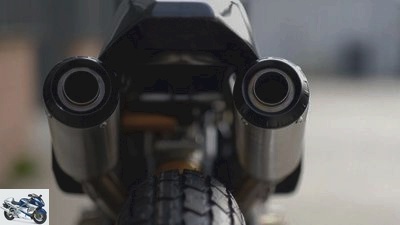 1/9
This Royal Enfield flat tracker was on display at EICMA 2019 in Milan.

2/9
The bike is called Twins FT and relies on the well-known 650 twin from Royal Enfield.

3/9
The engine was replaced by a Big Bore kit from S & S upgraded.

4/9
The frame was specially made for the bike.

5/9
The Flat Tracker was the result of a collaboration between Royal Enfield and the British custom forge Harris Performance.

6/9
The fairing parts were made of carbon.

7/9
The customizer donated a double exhaust system to the flat tracker.

9/9
Royal Enfield and Harris Performance do not reveal how much the renovation cost.

Unfortunately, we had to do without brand new series models from Royal Enfield at this year’s EICMA in Milan. A flat tracker called the Royal Enfield Twins FT was on the stand for this purpose.

Has used in the past few years Royal Enfield the autumn trade fairs regularly to unveil exciting series bikes such as the Himalayan or the 650 retro bikes Continental and Interceptor. In 2019, however, the Indian manufacturer with British roots held back with new series models. In return, visitors to the Milan trade fair got to see a stylish custom flat tracker on the stand. The Flat Tracker was created in collaboration with the British custom forge and Royal Enfield subsidiary Harris Performance.

650 twin from the current retro bikes

For the engine, Royal Enfield relies on an old friend for the flat tracker declared as a custom bike, which is already used in other models such as the Continental GT or the Interceptor 650. The 47 hp 650 twin is also no stranger to the MOTORRAD editorial team – the Interceptor 650 has been in the long-term test since the beginning of 2019 and has been doing well to date. The retro bike now has almost 15,000 kilometers on the clock. 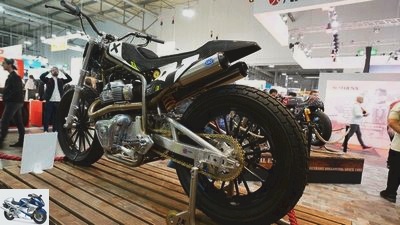 Royal Enfield’s Flat Tracker was shown at EICMA in Milan.

Otherwise, Royal Enfield concentrated on the essentials when building the Royal Enfield Twins FT. The engine sits in a steel frame specially designed for flat track racing. The engine was replaced by a Big Bore kit from S & S upgraded and so increased to 750 cm³. In addition, the FT comes with a double exhaust system. For the suspension elements, the customizers rely on an Ohlins TTX central spring strut at the rear and an Ohlins fork at the front that has been specially optimized for flat track races. In addition, Royal Enfield is donating the Flat Tracker RSD rims and matching tires from Dunlop, optimized for flat track races, as well as upgraded braking elements from Brembo. The few paneling parts were made of carbon. Royal Enfield did not reveal how much the renovation cost. In addition to the Flat Tracker, there were a few other custom bikes from Royal Enfield in Milan, which were not brand new and could already be seen in the run-up to the fair.

Whether Royal Enfield is working on a new model based on the Flat Tracker is completely open. In the recent past, Royal Enfield has always been available for pleasant surprises.