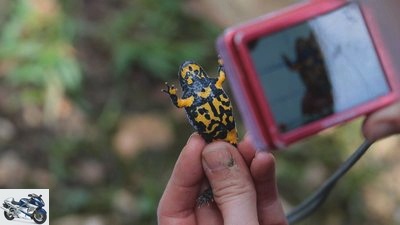 1/5
Motorsport and nature conservation don’t go together? The yellow-bellied toad, which has now become rare, proves the opposite.

2/5
She feels right at home on the grounds of the MSC Frickenhausen in the Esslingen district. By the way, the off-roaders make an important contribution to preserving biodiversity.

3/5
A yellow-bellied toad (Bombina variegata) grows up to 5 cm long.

4/5
Talking shop in the pond: Professor Dieterich (left) is an important contact person for the association and Clemens Pfeiffer (right).

5/5
The coloring is different for each toad, which enables identification. The poison is harmless to humans.

Motorsport and nature conservation don’t go together? The yellow-bellied toad, which has now become rare, proves the opposite: it really feels at home on the grounds of the MSC Frickenhausen in the Esslingen district. By the way, the off-roaders make an important contribution to preserving biodiversity.

It really doesn’t look like a nature reserve here. Earth churned up by studded tires, piled-up tables, piles of tires. But the animals we are talking about do not need much space either. There are clearly demarcated areas in the grass between the slopes, where you can stumble over deep puddles and pits. You can also discover them in the meter-high undergrowth and in drainage ditches: Bombina variegata, the yellow-bellied toad. What looks like a toad or a frog to laypeople is nowadays a highly endangered species of frogs that only occurs in central and southern Germany. The small amphibians are inconspicuous from above, but easily recognizable by their eponymous yellow-black spotted belly. The coloring is intended to warn potential predators of their skin poison.

Unfortunately, this does not protect them from the greatest danger, because, as so often, this comes from humans. Their actual habitats, floodplains and ponds, are increasingly being built up, filled in and only rarely flooded. A certain “Fault dynamics” but the animals need it. Even in forests there are only single, often isolated populations. There the animals use the tracks of tractors, rainwater often collects here and, depending on the amount of sunlight, offers an optimal home. By the way, forests have less to offer to Toads than you might think, because most of them are just not there “nature” to equate. Because they too are managed by humans. In front “dramatic declines” warns Professor Martin Dieterich, who is an expert on yellow-bellied toads at the University of Hohenheim. One explanation for this is today’s forestry, which often results in very dark forests. “However, the toads also need sunlight. In addition, many forest roads are paved and the formation of lanes is prevented”, adds Dieterich, who is currently supervising two master’s theses on the yellow-bellied toad.

Therefore, conservationists are happy about every population, even if they have settled on replacement habitats. These are often Bundeswehr training areas, quarries or, as here, motocross slopes. Everywhere where there is not intensive cultivation, flora and fauna can develop halfway freely. It is precisely here that the toads find what roughly corresponds to their natural habitat: disturbance dynamics and an unspoilt landscape that is constantly changing and has many half-overgrown, cloudy ponds. For the MSC Frickenhausen and the area on the edge of the community, the discovery of the co-users did not have any major consequences. Clemens Pfeiffer, head of the Enduro department and meanwhile a friend of ours, indicates that you rarely get in each other’s way during training. “We don’t go where the toads are anyway. Every now and then we dig more ponds for the toads, but they don’t accept everything.” But when they had dug a pit for a lamppost, the toads were quickly on the spot. They used the space overnight to lay their spawn. “We just moved it to another pond with a landing net”, describes Pfeiffer. You are just pragmatic.

During the annual care work with shovels and excavators, new opportunities for development are always created for the little animals. The association receives expert advice from the Esslingen Landscape Conservation Association, and through a thesis, the association also came into contact with Professor Dieterich. In addition to the toads, frogs and other visitors also discover the motocross area for themselves, rabbits and deer leave their traces in the loamy soil. When the two- or four-stroke engines bark, everyone tries to leave for a short time, but mostly the almost bird-like prophecies of doom should sound undisturbed across the terrain. At least until the end of September, from then on the animals go to their winter quarters. They don’t return until spring.

This example shows that environmental protection requires rethinking, but sometimes even works symbiotically with motorcycle racing. If such a site is available, it has advantages for the toad, as expert Dieterich explains. His conclusion remains pessimistic: “Without fundamental changes in nature conservation, the animals have no chance.” But in Frickenhausen the youngsters in motorsport develop an awareness of the toads and even take on sponsorships. “We print out photos of the toads and the kids can then name them”, says MSC member Pfeiffer. After all, the animals with their heart-shaped pupils and yellow-spotted bellies attract a lot of sympathy. Perhaps the strong yellow instead of the enemy defense in this case serves to win new friends.

If motorsport and environmental protection can be combined, in this case not only the frogs benefit, but also the offspring, who incidentally increase their awareness of nature and their environment.