The B-King is the big Suzuki roadster and the biggest production roadster in terms of power and torque with no less than 185 horsepower and 14.9 mkg almost fully available from 4,000 rpm. Presented at the Tokyo Motor Show in 2001, the concept bike became a reality by directly using the engine of the Hayabusa 1340, known for its ability to overtake the TGV at top speed. ! So, inconduisible and to be reserved for shows on the Croisette? Surprise, the king hides his game well …. 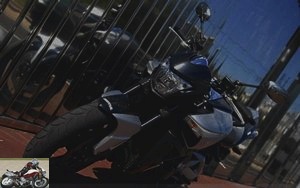 As much as the Hayabusa is almost discreet against an XX, the B-King is really imposing … from the massive headlight to the prominent double exhaust under the saddle through the width of the beast with its huge side scoops integrating the indicators. Conversely, the imposing 4-cylinder 1340 cc is almost hidden in black. On the test model, the original exhaust line was replaced by a double Yoshimura line of the most beautiful effect. The B-King then offers an image closer to the bull ready to charge than to the Speed ​​Triple antelope.. 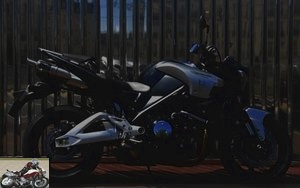 As we get closer, we first notice the huge central analog tachometer on a digital silver-rimmed background, with a red zone at 10,500 rpm. The digital part is almost discreet on the right part of the meter, with the indication of speed and gear engaged. For the rest – fuel gauge, engine temperature, clock, partial double trip, reserve indicator – everything is in the center. In this regard, as much the indication of the engaged gear is almost a gadget on some motorcycles, it is almost essential on the B-King so much this engine is able to run at all the speeds in any report, from the lowest to the higher speed, with an apparent identical ease. 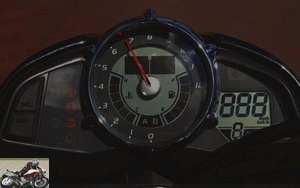 There are two modes "A" and "B", which are selected on the tank, "A" mode being the normal mode, and "B" mode the "rain" mode. Everything is chosen at a standstill only, at a standstill. Note that mode "A" is reset by default on each start-up..

Finally, we notice a steering damper, rather "loose", which only seems to be useful for the "full power" version..

The feet barely touch the ground for the 1.70m rider, despite a saddle reasonably placed at 805mm, but wide. The hands rest on the wide handlebars. The slightly tilted forward position is natural, close to all sporty roadsters, without any support on the wrists. The legs are ideally placed under the side scoops with still room. The knees are then slightly apart by the width of the bike, but just enough to grip the 4th cylinder naturally. But be careful because if this is true for pilots under 1.80m, the taller ones will not be able to place their legs in the same space, forcing their legs to be placed on the outer side of the scoops, making the position less pleasant.. 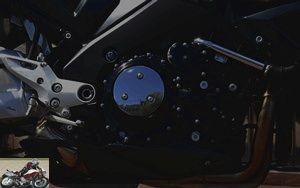 A muffled sound escapes from the Yoshimura double line. Gear engaged, the right handle turns delicately, anticipating the violence of the cavalry…. but it is not. The B-King snorts almost naturally. Be careful though, because a sudden grip of the handle and the big raodster can almost rear up. In the meantime, he agrees to wind quietly, quiet strength, on a very thin stream of gas, without any sudden. It’s soft, supple, pleasant like rolling on velvet. As the weight of the stationary machine requires effort to move the 255 kilograms fully loaded, the weight seems to disappear from the first meter. The contrast is striking between the apparent heaviness on the outside and the moving reality. Even lifting the motorcycle from the side stand position is easy. 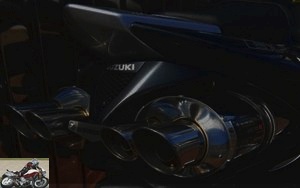 Despite its apparent size, the B-King is very manoeuvrable and literally plays with traffic jams. The maneuvers are simple and easy, without any particular effort. It gets a little harder only with a passenger present, and again only on maneuvers under 5 km / h.

The B-King winds around town on all gears, agreeing to stay in 1st, or winding in 6th gear at 30 km / h and 1,000 rpm…. and without complaining more! The flexibility of the 4-cylinder seems even more important than the Hayabusa: simply available everywhere. Even on the last report at 30 km / h, the B-King sets off again on a trickle of gas without knocking with sympathetic and largely sufficient acceleration in town. The danger is there besides, because the roadster propels easily and without apparent effort, so much so that one finds oneself easily and realizes it at illegal speeds. Fortunately, the brakes are there to react just as quickly…. because the engine brake is almost non-existent. 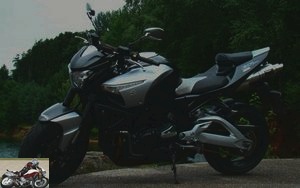 It only takes less than 3 seconds to reach 100 km / h. Suddenly, the B-King leaves town with energy, even violence, when it is only 4,000 rpm at 125 km / h. 1,000 rpm higher, it is still only 155 km / h, speed well enough to lose its license, while the motorcycle can take another 6,000 rpm at the rate of 30 km / h additional every 1,000 rpm! And whatever the speed, the behavior of the B-King does not change…. Stable both in a straight line and at an angle, the B-King always seems riveted to the road and takes care of everything in "autopilot" mode. As for overtaking, they are carried out in a few seconds, the cavalry being always there, even to pass in conditions and with a speed impossible on other motorcycles..

In fact, it is the pilot’s physical capacities that will make you slow down. Because without any protection, the cervicals start to work from 150 km / h. At 170 km / h, the weight training is effective and at 185 km / h (on the German motorway), the head literally unscrews. 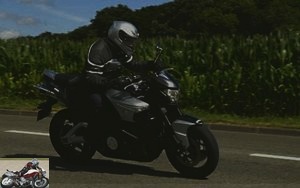 The B-King therefore gladly finds the departmental roads to alternate between fast pace and quiet winding, again regardless of the speed engaged. Because the first report is pushing briskly and effortlessly to 125 km / h, already speed largely prohibited on departmental. The second pushes just as easily up to 175 km / h. We come to think that all the other speeds are only overdrives, except that even in 6th at 130 km / h, the slightest impulse on the right handle makes the machine take off..

But in the event of arousal, the B-King literally catapults from one turn to the next, with a front end that offers extraordinary precision. And yet, there is no need to work on its trajectories, because the B-King allows all the last minute and angle corrections to easily correct a pilot who is a little too optimistic. While some bikes remain impeccable on the angle, they however require polished and prepared trajectories that do not allow any improvisation. The B-King allows improvisation. Ultimately, this is his only flaw, because by dint of building confidence, we open up the throttle more and more, telling ourselves that it will always happen…. and it always happens elsewhere. 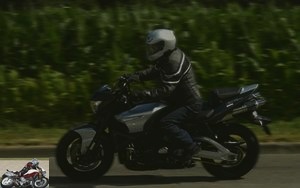 The 4-piston radial calipers provide excellent braking up front, with good feeling and plenty of power, especially as you grip the grip. Because braking is as easy to handle as the machine, with a power well to go, but always perfectly dosable. The rear is just the necessary retarder that can be used around corners. In all cases, the behavior of the motorcycle is exemplary in terms of stability even on strong braking.. 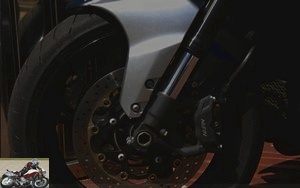 The B-King deserves a custom saddle for a bit more comfort, although the first impression as the miles go is good, for both rider and passenger. The B-King tolerates bad surfaces rather well, even if the holes in the pavement generate very sharp reaction blows…. but without interfering with the handling, even in bends, always precise and impeccable. 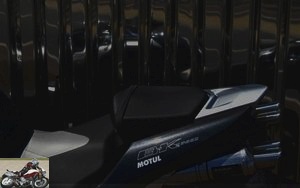 The B-King allows the duo, even on long journeys, and that’s quite a pleasant surprise. Now, don’t expect GT comfort, especially since there is no grab handle. The passenger, on the other hand, appreciates being perched above the pilot for a breathtaking view of the road.

The average consumption per hundred kilometers is around 6.1 liters, with peaks at 7.6 liters, the minimum standing at 5.6 liters. The first stick in the reserve usually extinguishes after 40 km…. each subsequent stick then also extinguishing after 40 km. The B-King thus goes on reserve at around 200 km, allowing an average range of between 220 and 250 km, with its 16.5-liter tank.. 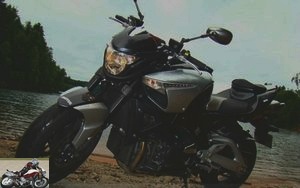 If the large tank is magnificent, it is plastic and incorporates reliefs and buttons which in the end do not allow anything to be stowed. There is no space under the seat, neither under the rider seat, nor under the passenger seat. The passenger seat is then so narrow, and the double exhaust so close, that it seems impossible to consider side bags. 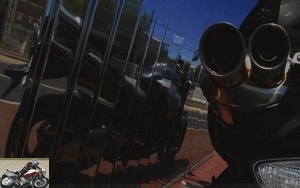 The B-King is a real success, without comparison, with an engine ready for anything in a possible place of use between 1,000 and 10,000 rpm, nothing less! The cycle part is up to the task, complying with all the requirements of its pilot. And again, more than a pilot, I should say biker. Because the B-King doesn’t need a pilot. It is a roadster that is taken in hand without a user guide and on board which you feel at ease from the first meters, with an ease all the more impressive that its size and its lineage (origin Hayabusa) could make think of a very big very nasty roadster. It is not so. The B-King is closer to the big domesticated bear than to the wolf to which some 1000cc roadsters might be compared. It therefore has no real direct competition, unless it is eventually compared to the late X11, which it has far exceeded in terms of power and ease of handling. Suddenly the B-King can be a real second mount, provided you forget the unjustified a priori of the template. Only its price initially at 13,699 euros could have made the Bandit 1200 look at 7,999 euros. But the price difference between the two models is largely justified, at all levels! However, the B-King now benefits from a long promo at 11,699 euros (11,999 euros for the ABS version), which should put it back in the race for big roadsters..